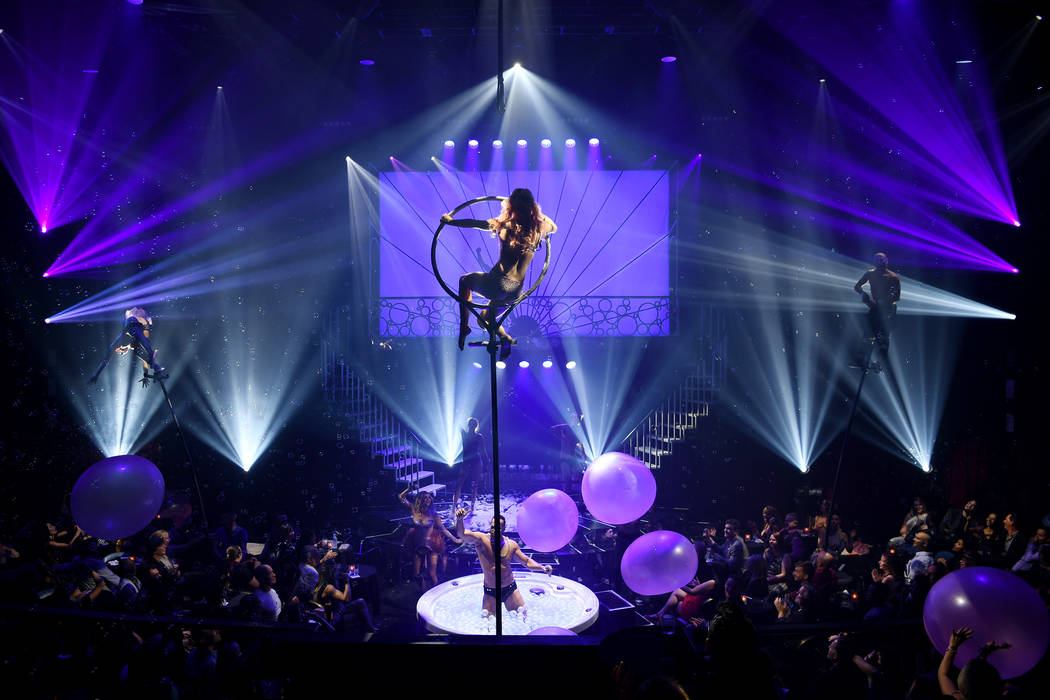 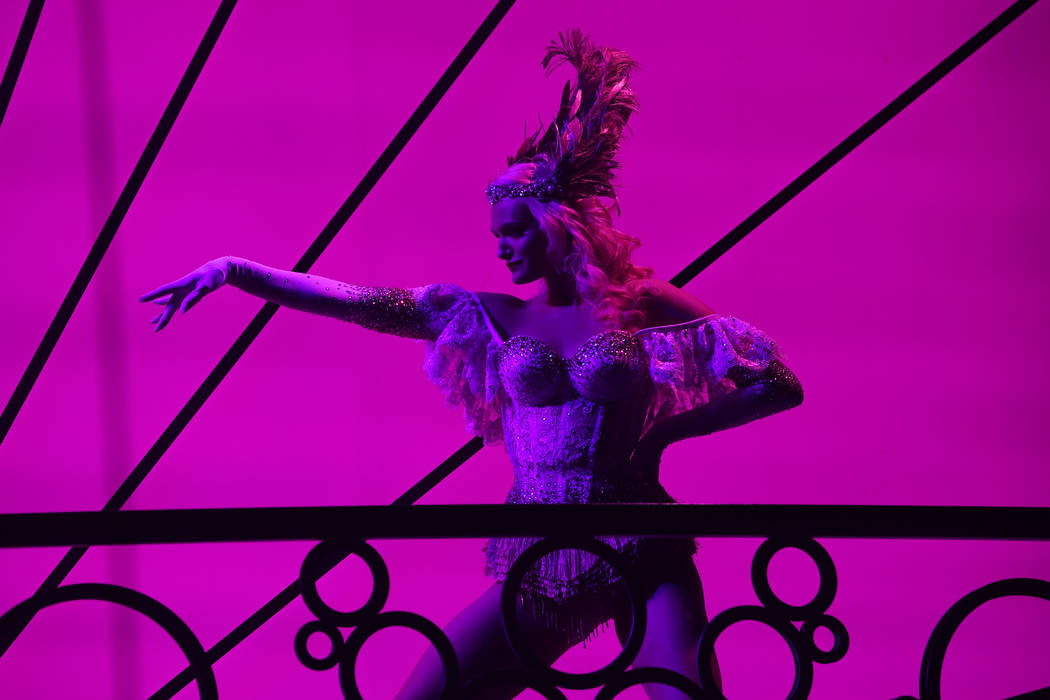 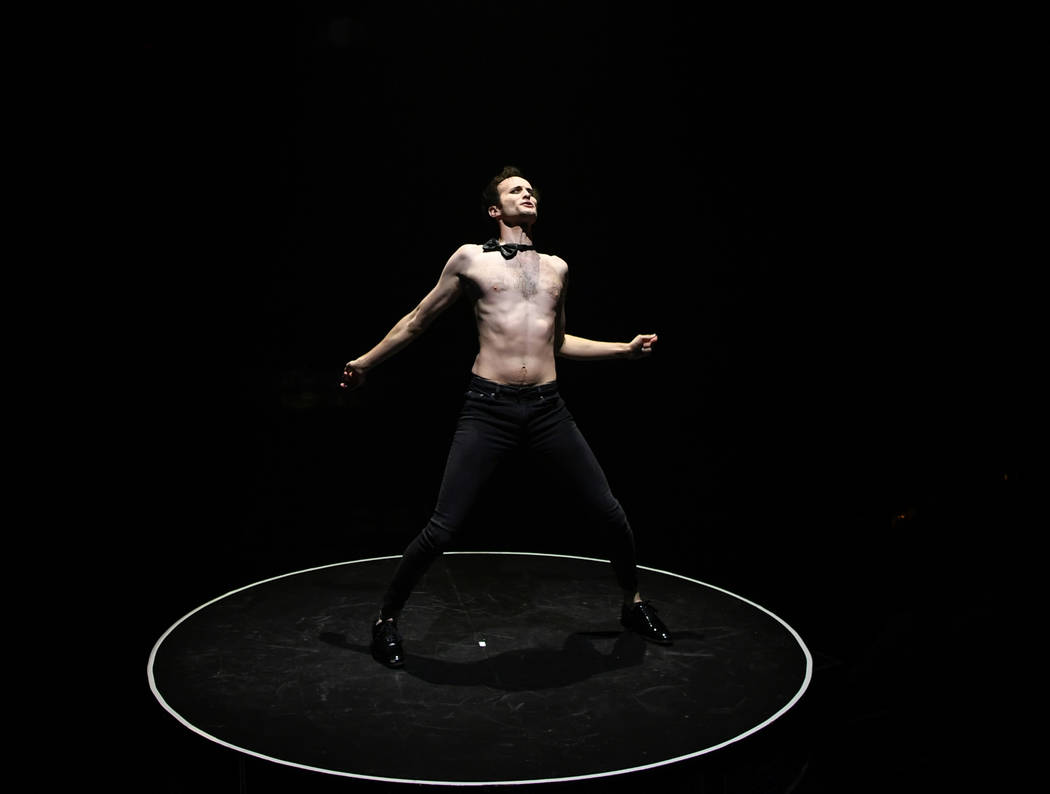 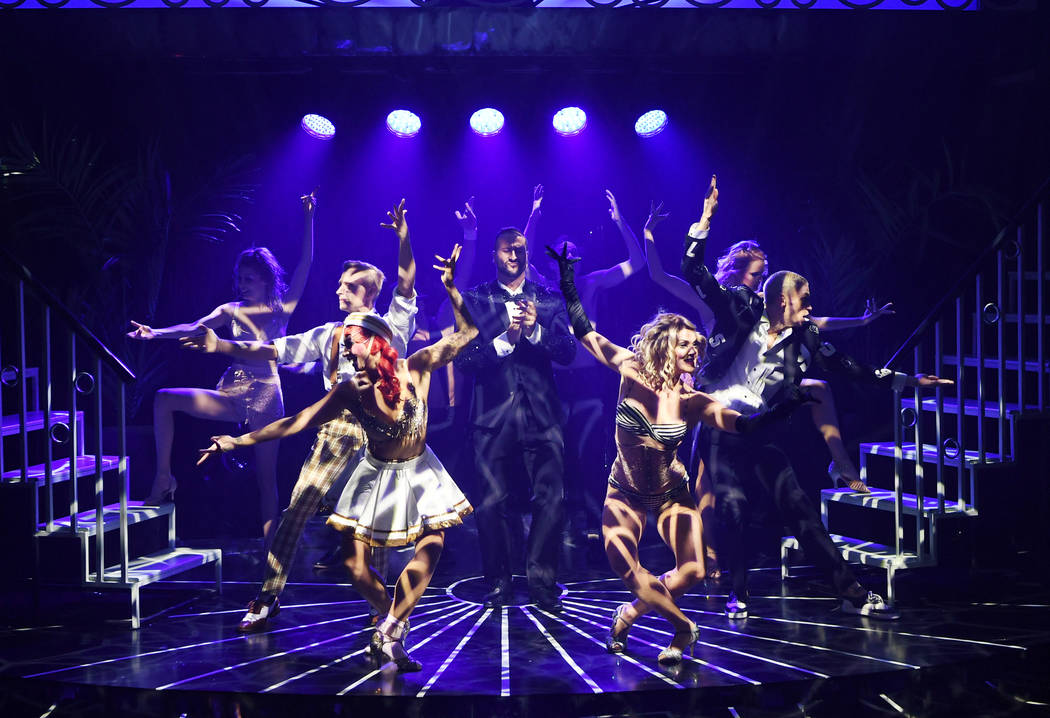 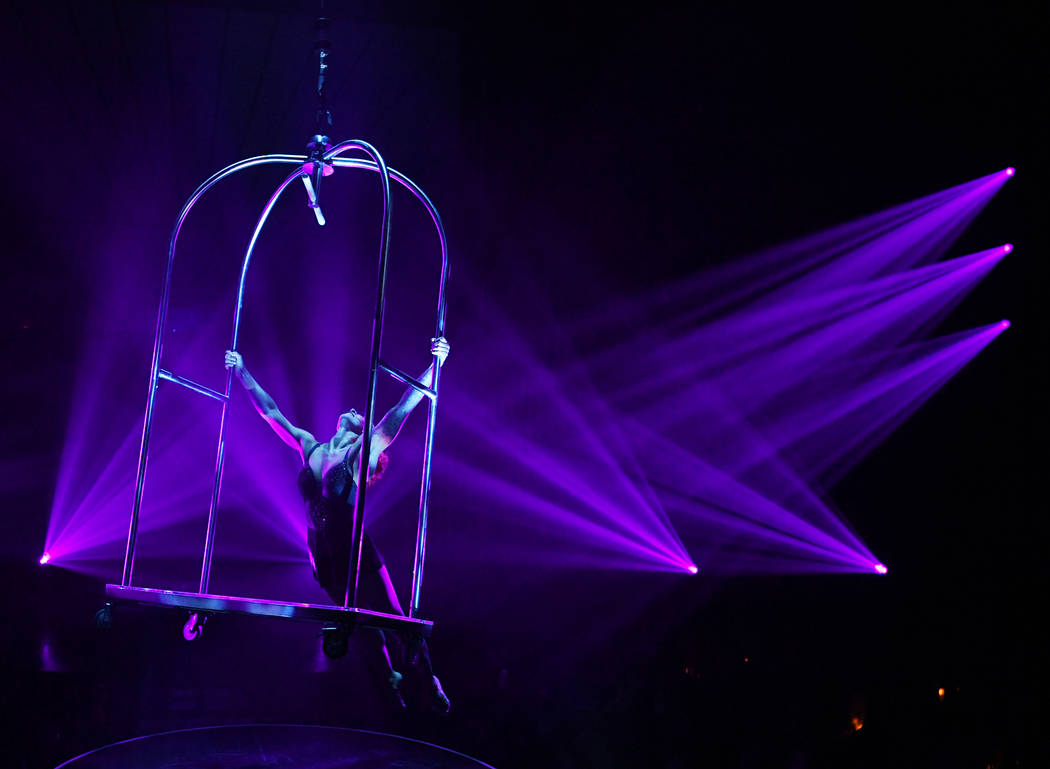 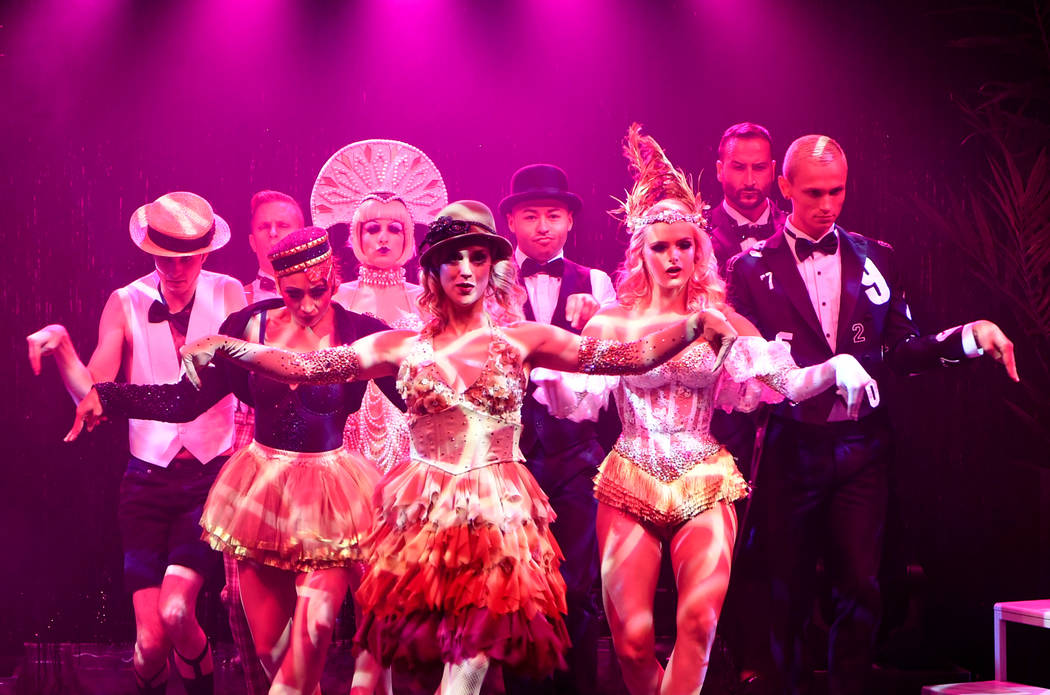 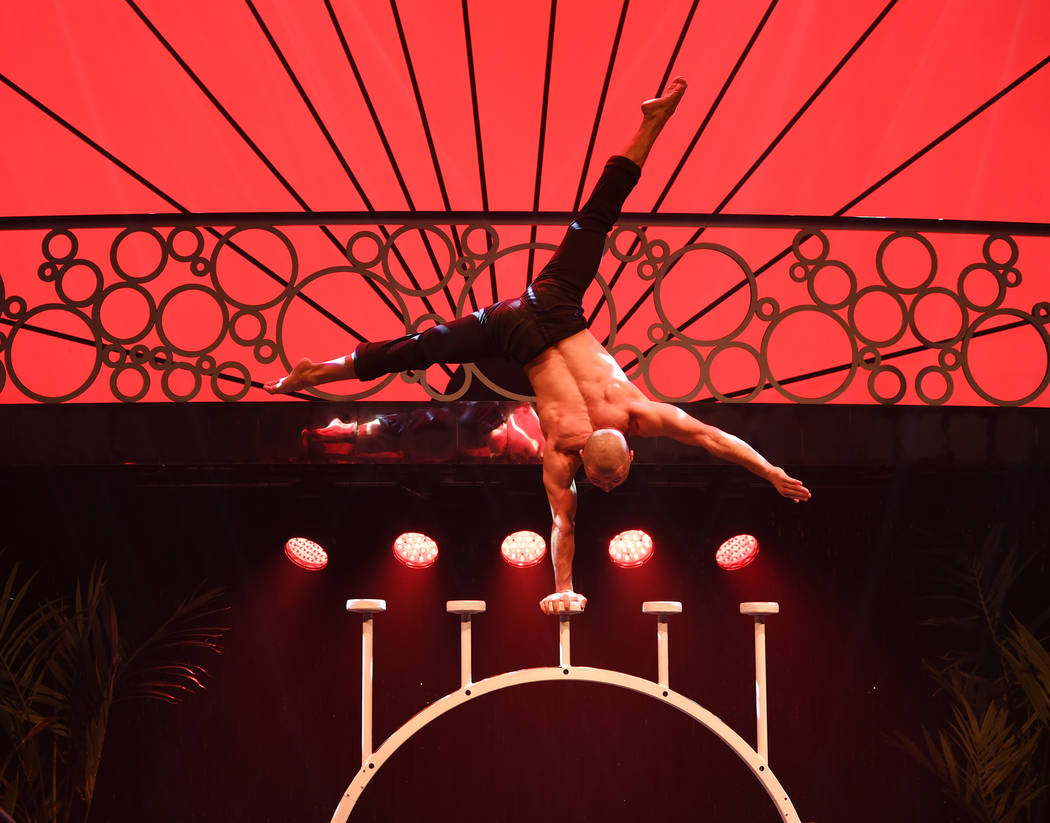 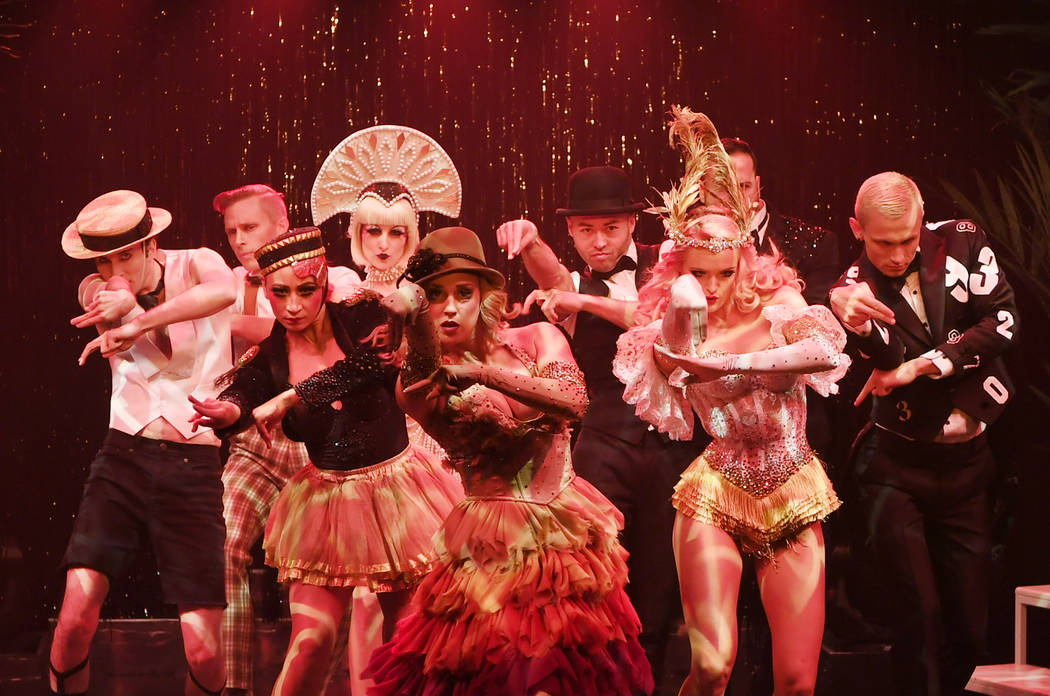 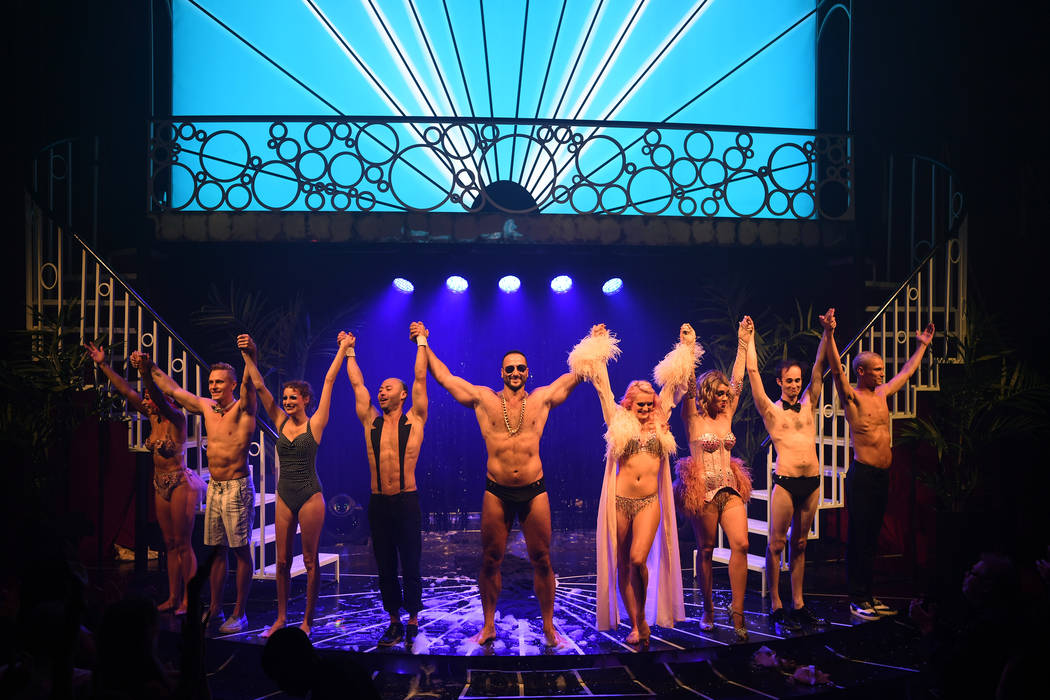 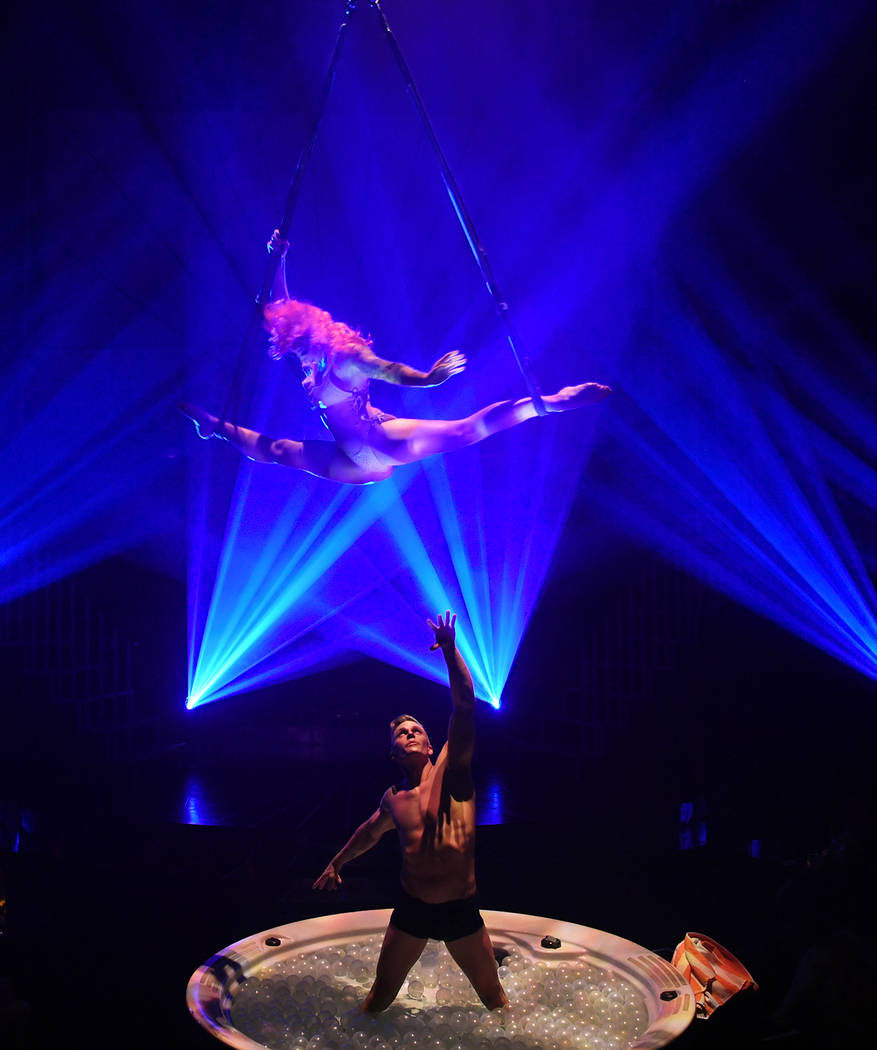 “Blanc de Blanc” has lifted the lid on its hot-tub of a production on the Strip. Now it’s time to shake the hangover, and get to the real work of making the show a hit in Las Vegas.

Effervescent as a bottle o’ bubbly, “Blanc” has opened at its customized, eponymous theater at the newly re-minted Sahara Las Vegas. We’ve been eager to see the unique stage and seating effects displayed in the second half of the show — three hot tubs, one for French fashion model/emcee character Monsieur Roméo and two others for VIP guests.

It’s a splashy gimmick sure to generate a ripple in the entertainment community; members of “Love,” “Fantasy” and “Thunder From Down Under” already have watched the second half of the show from the watery locales. This is indeed something different from a production that will need word of mouth to bubble over.

Off the top, “Blanc,” from independent production company Strut & Fret, certainly is inventive, daring and funny enough to be an artistic and financial success. You like spending time with this able, experienced cast.

Beyond that, the producers’ charge is simple but not easily attained: To lure adult ticket buyers to a hotel surrounded by under-construction resort and convention projects. Attack the Strip with outdoor advertising and turn the cast loose on social media, because it is not enough for a new show to be great to make a hit in Vegas. You need to flood the zone with marketing, while maintaining quality control onstage. Otherwise, you’ll be outta here faster than you can say “Fuerza Bruta.”

“Blanc” begins as a tame and refined party led by the Monsieur (a sly and fit gent who could have meatier material written for him, TBH). The show vaults around the theater’s lower seated section with acrobatic acts and comedy that unspools to near-orgy status by the end of the night.

It’s an adult experience that unleashes fully naked activity — look for the hashtag #NudeNovich, a tribute to deputized emcee Spencer Novich. The fantastic comic contortionist who appeared in “Vegas Nocturne” at the Cosmopolitan and in “Ka” at MGM Grand” awkwardly performs with masterful dancers J’aiMime and Hippy-Joe Weston.

The three manage to conceal themselves well enough to avoid showing any body parts — even as Novich meanders into the audience and walks across tabletops (think of the NFL’s “Tuck Rule”). It’s truly magical, but still shows that“Blanc” does go there, as it proves it is a night out for adults.

The show’s use of nudity is on purpose, too. Unlike the scenes early in “Absinthe,” when parody ballet artist Ivan Jones “accidentally” exposed himself during “Casaean Ballet,” “Blanc’s” shedding of clothes is entirely scripted.

This moment underlines an artistic challenge for “Blanc,” a ground-breaking show for two years internationally that is actually following a trend in Las Vegas.

We have seen raunchy cabaret circus comedy for years on the Strip, not just with “Absinthe” — far and away the biggest hit in this category — but in productions that followed. The most notable are the inspired but-short lived “Vegas Nocturne,” follow-up production “Opium” at the Cosmopolitan. And “Blanc,” a favorite of hotel owner Alex Meruelo and his team at Meruelo Gaming, opens just as another adult acrobatic comic satire, Spiegelworld’s “Atomic Saloon Show,” arrives for previews Sunday night at The Venetian’s Grand Canal Shoppes.

In scale and tenor, “Blanc” is in the same classification as a killer cabaret production with a tight cast filled with daring acrobatics and saucy humor. This show rolls with impressive aerial acts, a hand balancer whose act actually broke in Wednesday’s opener (he fell from a pole, uninjured, about five feet to the stage); body-contortion routines that are alternatively dazzling and unsettling (never seen a person spin his head completely around); and a tandem twerk segment that shows how tough it is to keep a team of twerkers in tandem.

The show’s closing segment also is something familiar, a collective sway-pole act over Monsieur Roméo’s solo hot-tub party. “Absinthe” has featured a version of this number, too, though “Blanc” founding director Scott Maidment has used the poles in ”Blanc” since 2016,

Had “Blanc” opened in the spring of 2011 — when “Absinthe” arrived — that scene, among many others, would be far more rousing. Today, we know it well. You can’t help the timing, but “Blanc” is dealing with a lot of acts that are being performed, in some form, somewhere else in Vegas.

The “Blanc” party reaches climax as giant balloons fall on the audience and cause general unrest, knocking around audience members and toppling beverages. As I helped one friend find her glasses and another wipe a spilled cola from his shirt, I nodded toward the Monsieur. This guy was having a splendid night, all things considered, and you know what? So was I.