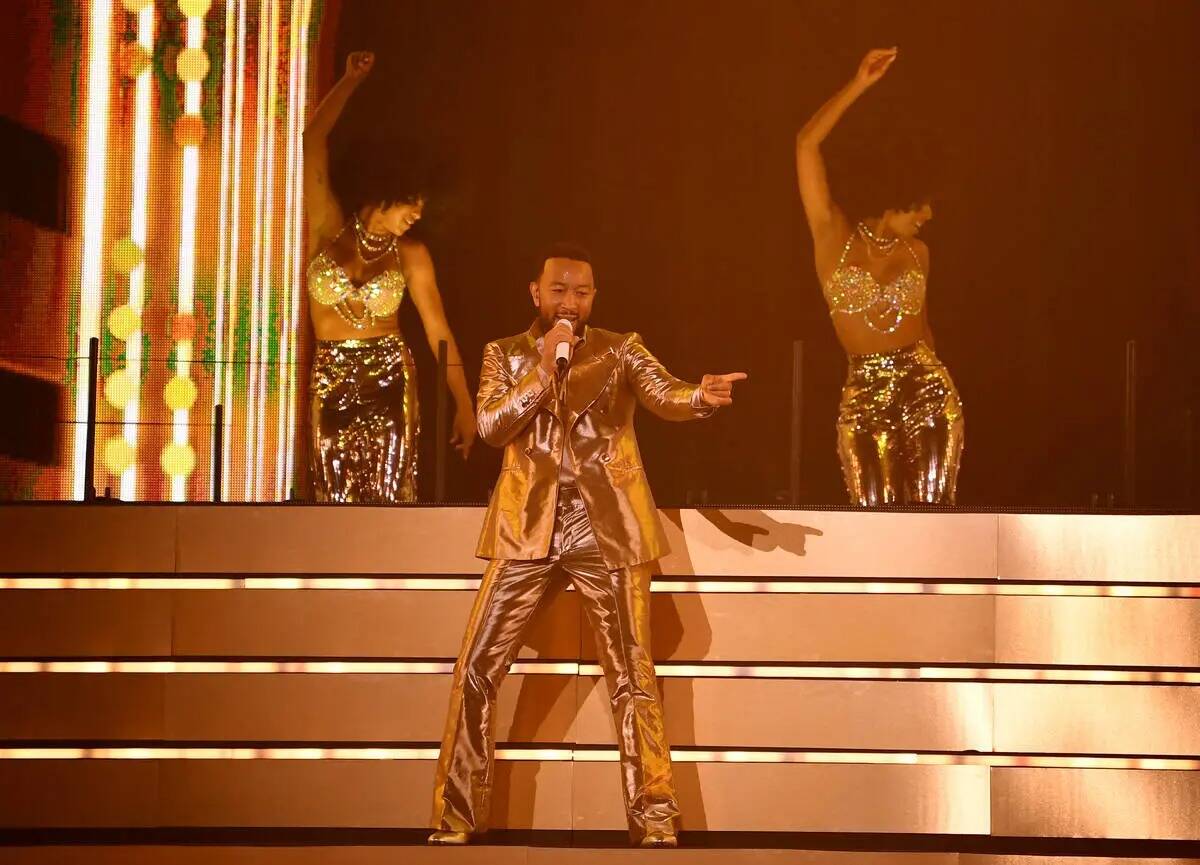 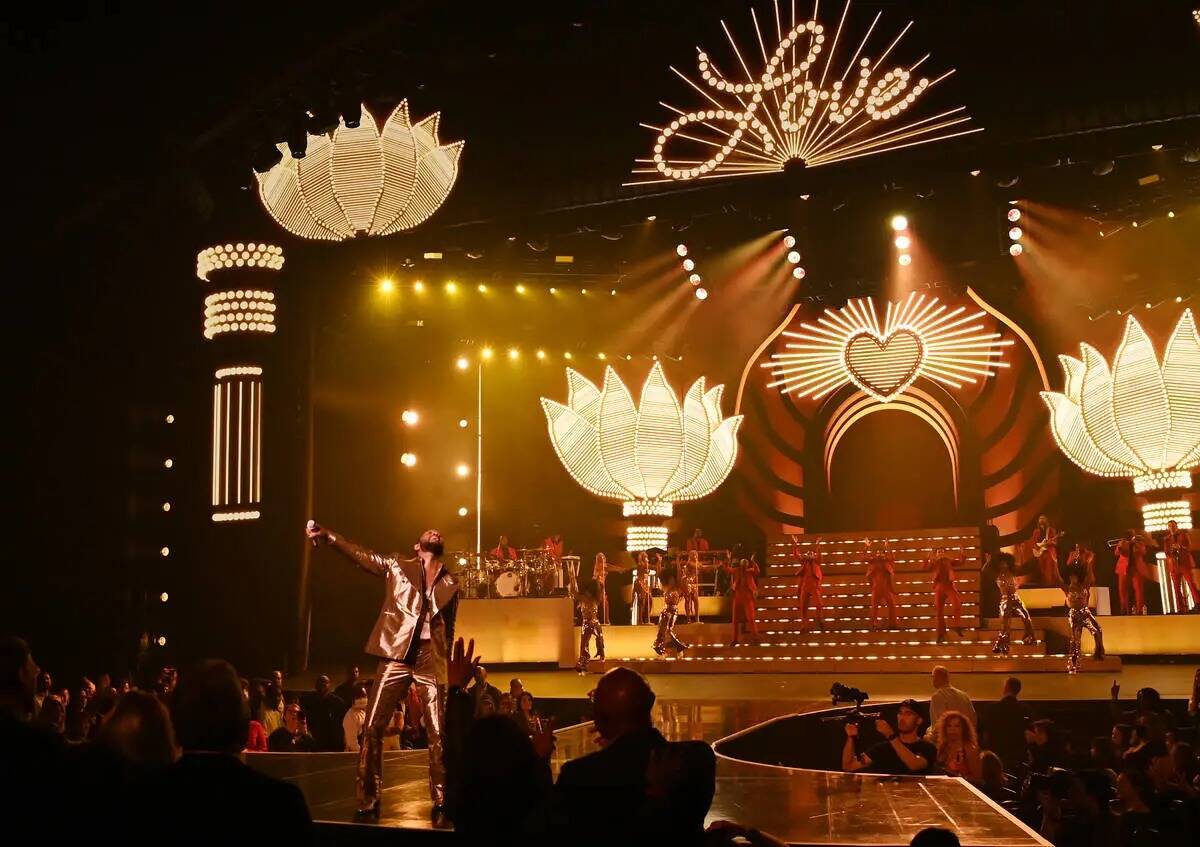 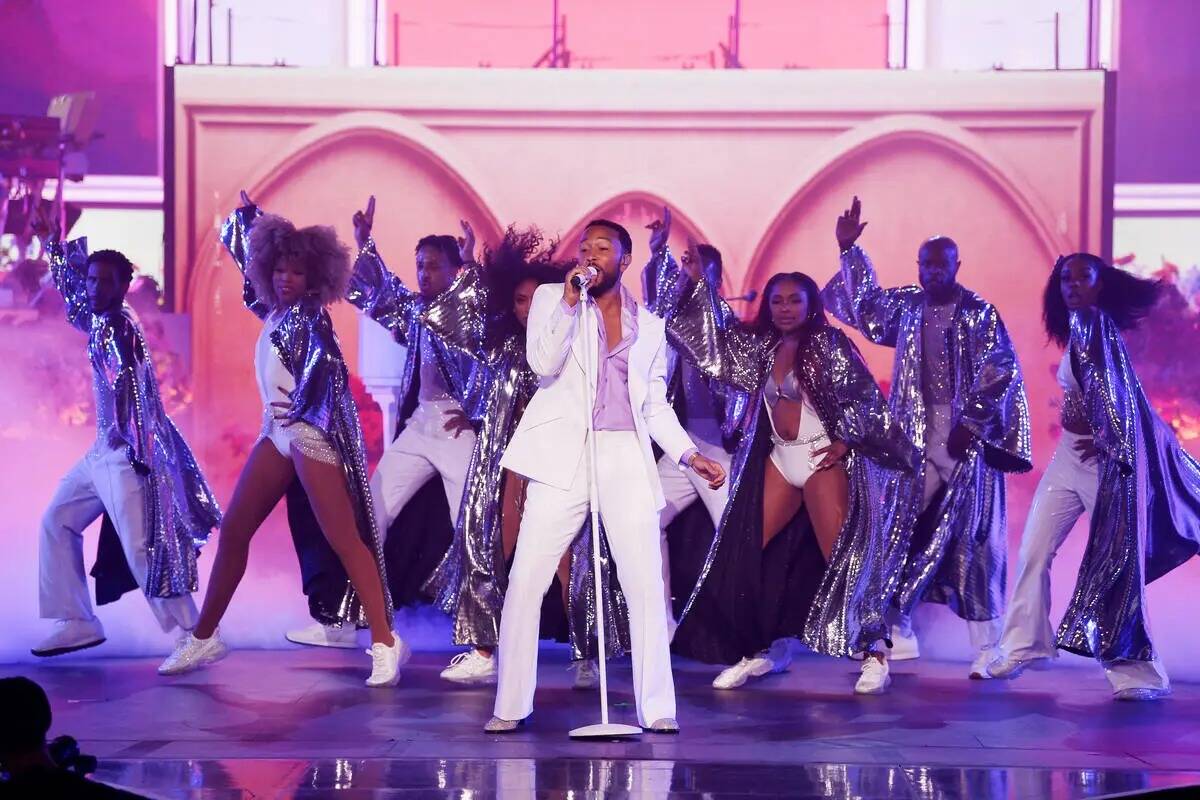 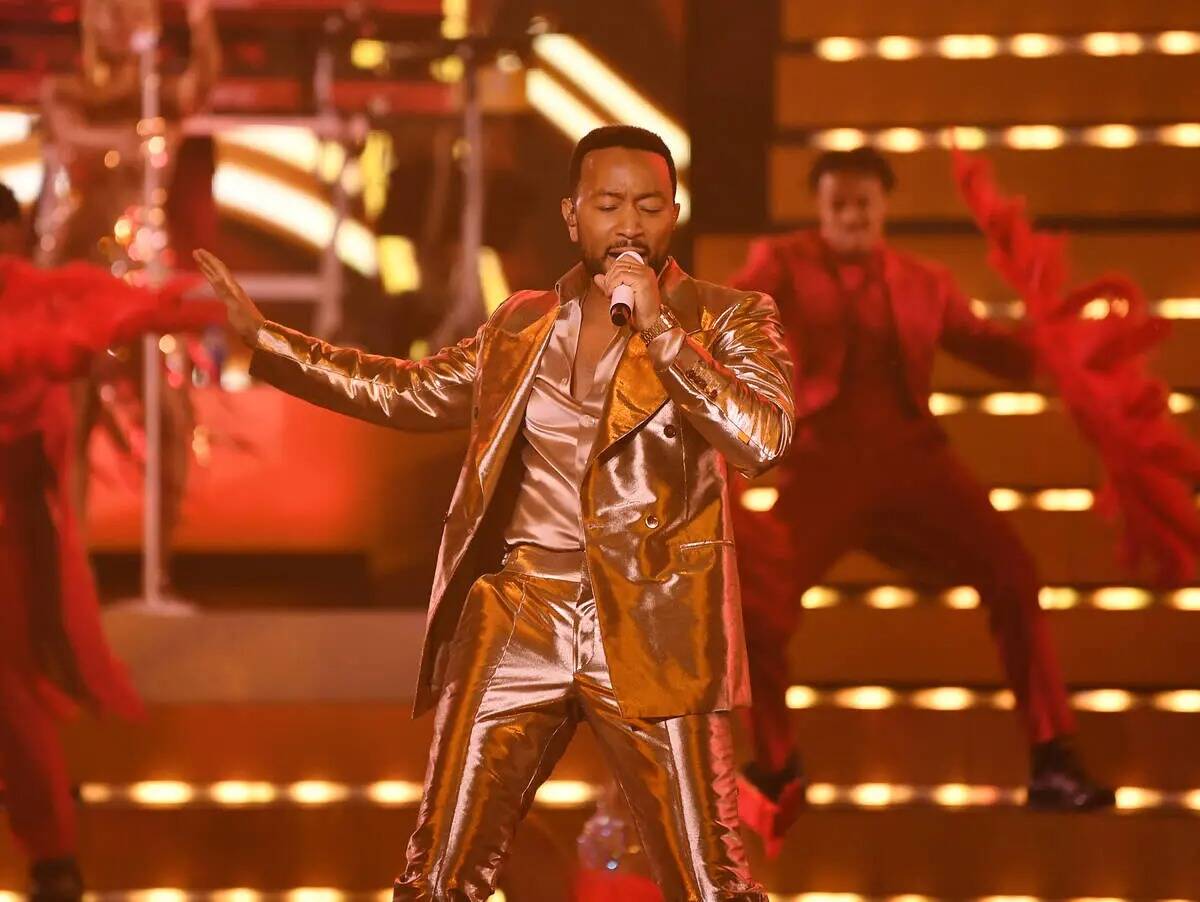 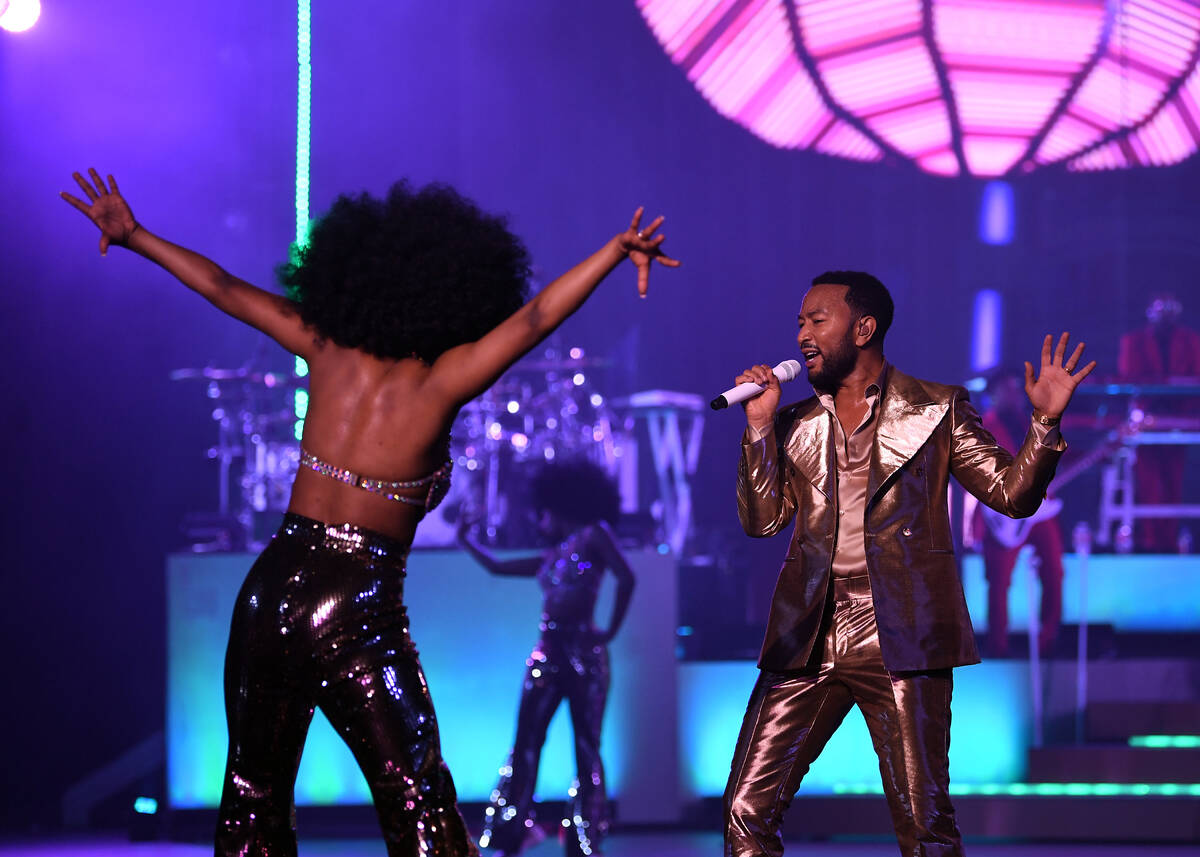 John Legend performs during the opening night of his residency "Love In Las Vegas" at Zappos Theater at Planet Hollywood Resort & Casino on April 22, 2022, in Las Vegas, Nevada. (Photo by Denise Truscello/Getty Images for Caesars Entertainment) 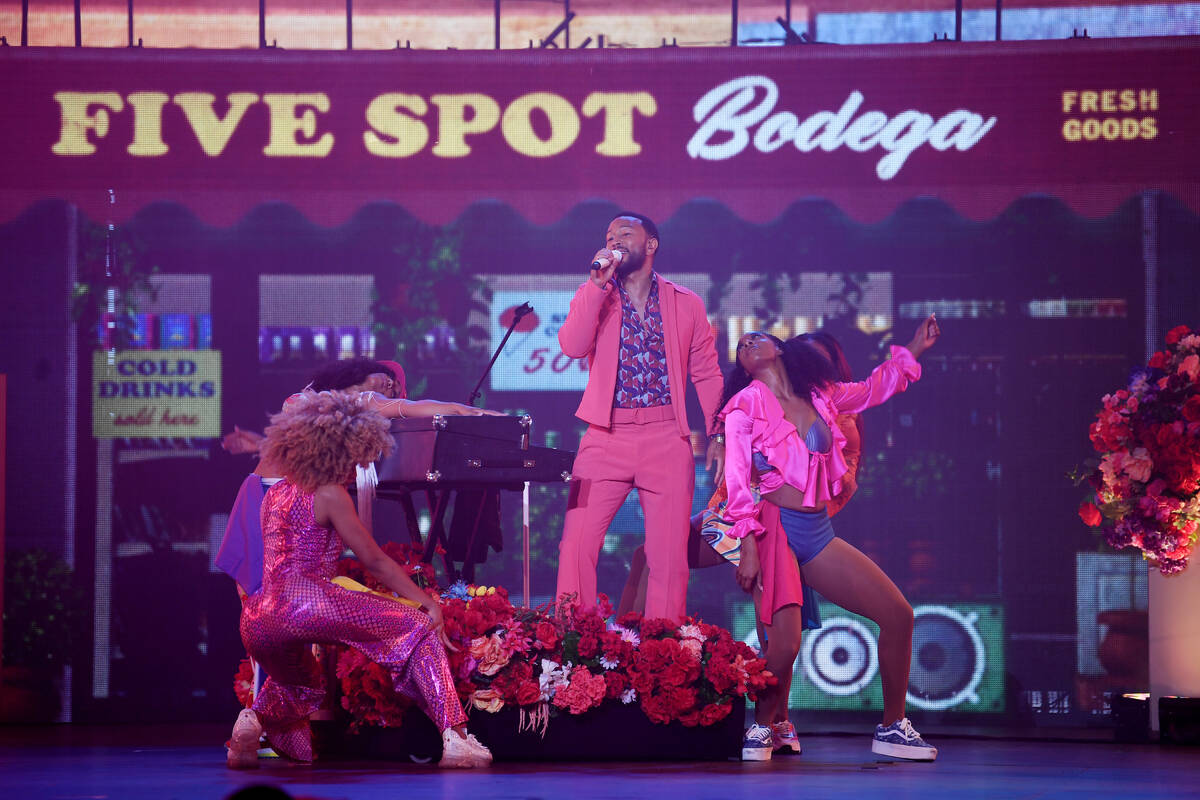 Just 12 hours removed from the premiere of his “Love in Las Vegas” show at Zappos Theater at Planet Hollywood Resort, John Legend looks so rested, as if he slept all of those 12 hours.

Stylishly suited, as always, Legend took up a director’s chair just off the theater’s VIP section to talk about the previous show and what is next for his Vegas residency. “Love in Las Vegas” runs on select dates this weekend, in May, August and through Oct. 29.

Johnny Kats: A day after opening night, what worked for you?

John Legend: I’m really proud of the production we put together, the team worked so hard, and we were changing things until the very last minute. And I felt really great about the, just the collaborative effort that went into making the show work. And I thought visually it was gorgeous. … Everything just came together really nicely. We’ve never done a show this big before, right? But we wanted to do a big Vegas show, and I felt like it came together beautifully.

At the end of the show, you mentioned how much time you put into the production. That was evident. It’s very hard to make something look easy, isn’t it?

I’m lucky. I have so many great people around me, and it was truly collaborative. You know, I’m not a choreographer, I’m not a creative designer that can make all these things look so beautiful. I have great people around me that are able to do that. And I’m there to be an inspiration, to check on everybody and go back and forth and get my feedback. But there’s so many people that work so hard to make it happen.

I’m interested into what you were inspired by, in relation to Las Vegas. This show has a kind of flirty quality. It’s hard to put your finger on it, but it is a very Vegas-styled show.

We kind of went vintage and we looked at a lot of photos and references. The piano scene was kind of inspired by an art deco kind of vibe. So I thought of kind of ’50s and ’60s artists. And then the last part was more kind of ’70s. We looked at a lot of different photos and images from those different eras and tried to, like, summon our favorite parts of it and then make it.

So, you started visually, in concepts, and built the story from there?

We thought about my journey and what scenes we wanted to have. So, the first part was obviously kind of church-themed, because I grew up playing and singing in the church. And then we moved to a block party, because most of my early career I lived in Philadelphia and New York. And so it was kind of inspired by just the energy of both of those cities.

In all this setting, you create space for some great musical moments.

Yes, then we strip down to the piano bar. And that’s when we start to go vintage and really kind of embrace the part of my journey that’s kind of been inspired by the crooners like Nat King Cole and MarvinGaye.

I got that, totally. I said both of those names during the show.

You mixed in some famous production elements along with those influences, too.

Of course, at the end, we went for Vegas with it and had the feathers, showgirls, the whole thing.

Did you ever see “Jubilee” or “Folies Bergere”? those are two shows that definitely influenced your show.

No, but we had references from all of those shows. And we wanted to fully embrace the spirit of Vegas and pay homage to all the great entertainers that have come through here.

I saw the family was here at the opener. Your son, Miles, fell asleep during the show. I think he was the only one. He brought a blanket. He came prepared to sleep.

(Laughs) He sleeps like me. When we’re ready to sleep, we’re done, no matter what’s going on around us. We go to bed at 8 o’clock, so we were up way past his bedtime.

In the block party segment of the show, I noticed the hotel “Vacancy” sign was lit, then as the scene went on it flashed “No Vacancy,” like it had been filled during the performance.

Yeah, that city scene, it gets darker as the night goes, right. And that sign goes on, so it’s like getting sexier and people are starting to fill up the room.

You’ve played a lot of venues in Vegas, and the last time you were here was at the Chelsea at The Cosmopolitan. There are many options out there for you. Why Zappos Theater?

They came to us with a great proposal, and we’ve seen a few great shows here, and it felt like it could be a wonderful collaboration with us and Live Nation and the folks at Caesars. We just felt like they know how to do this right. And they’ve been such great partners for us.

I know it’s early, but this show feels like it can have strong word-of-mouth and momentum. What are your options to extend the run?

We just have it for this year, but anything’s possible. We’re loving it. If our friends at Live Nation and Caesars are loving it, then we’ll see if we can do some more.