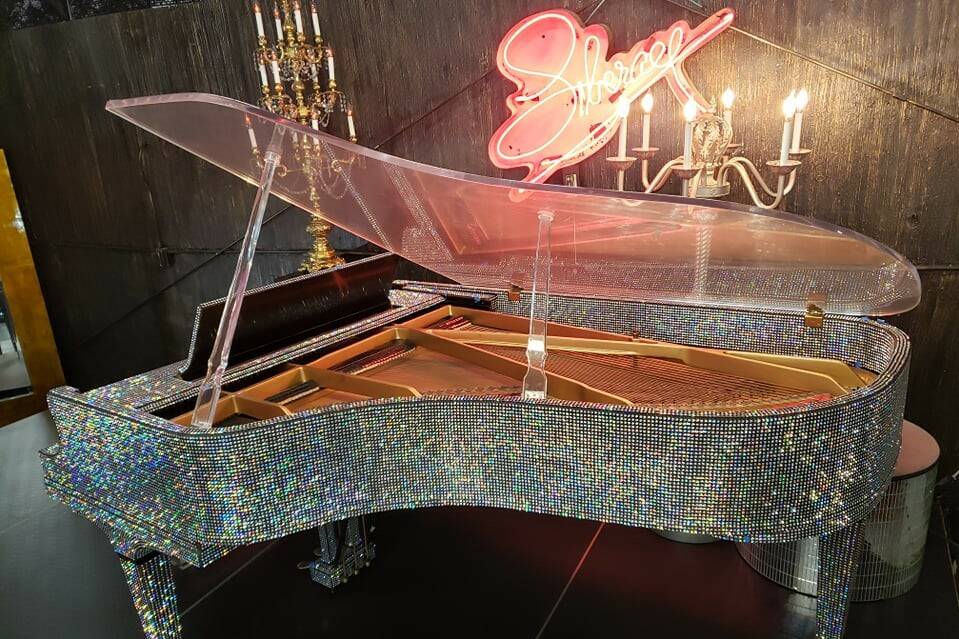 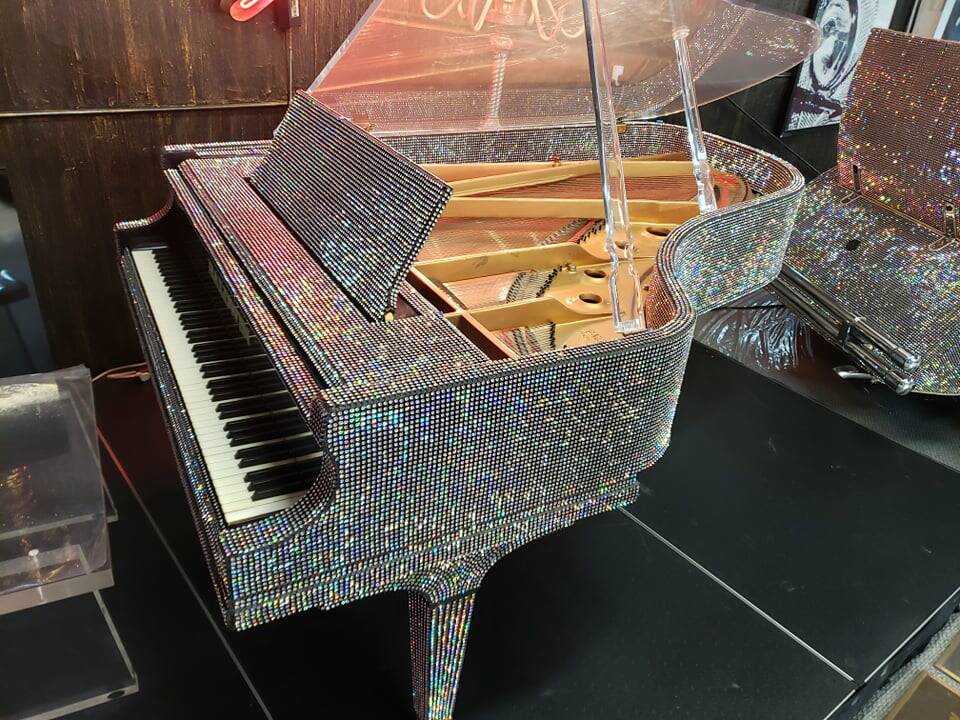 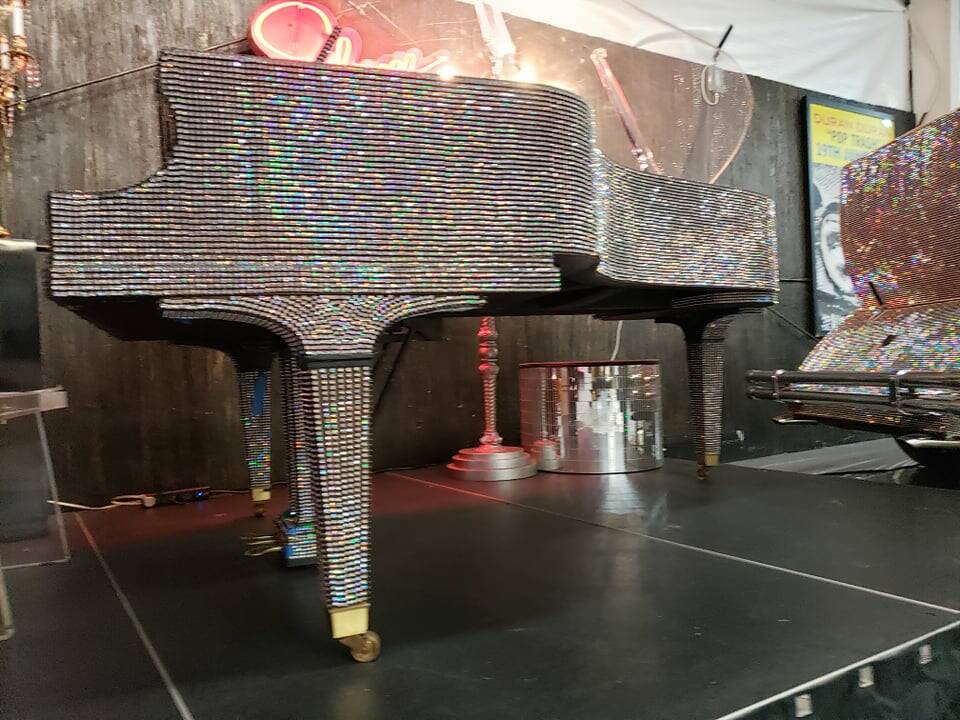 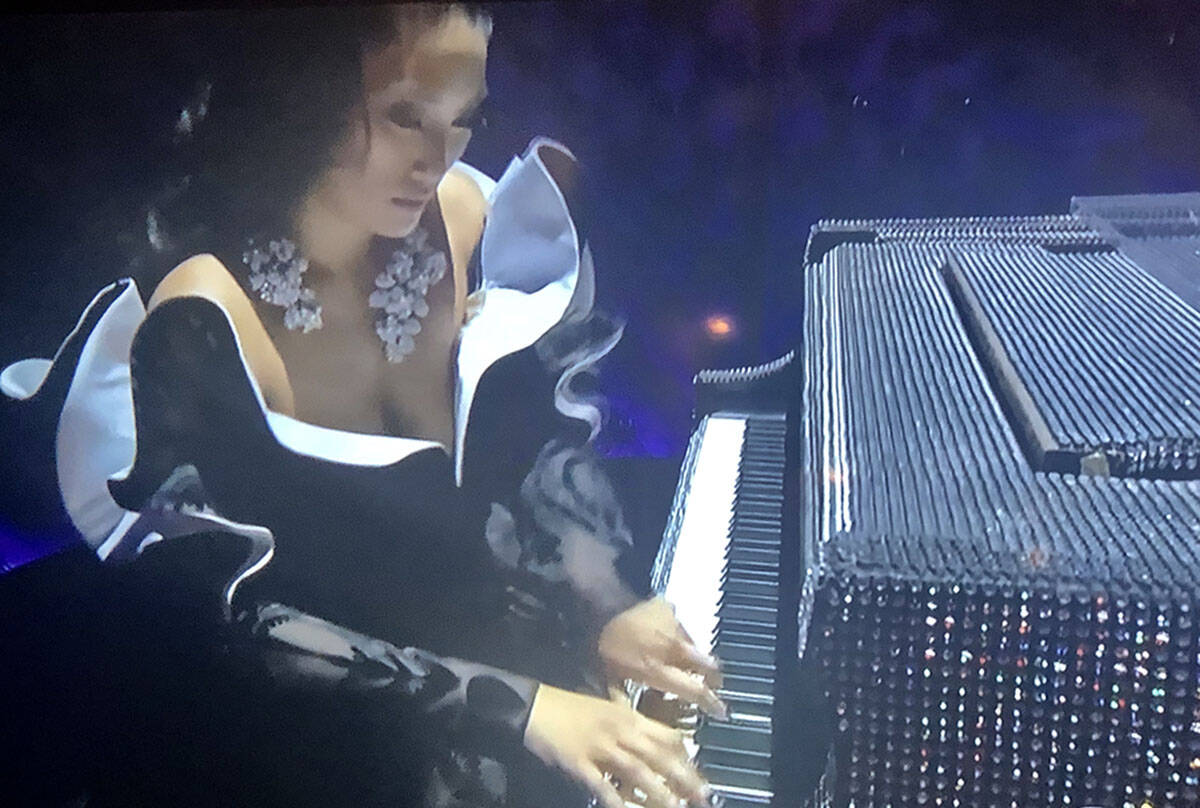 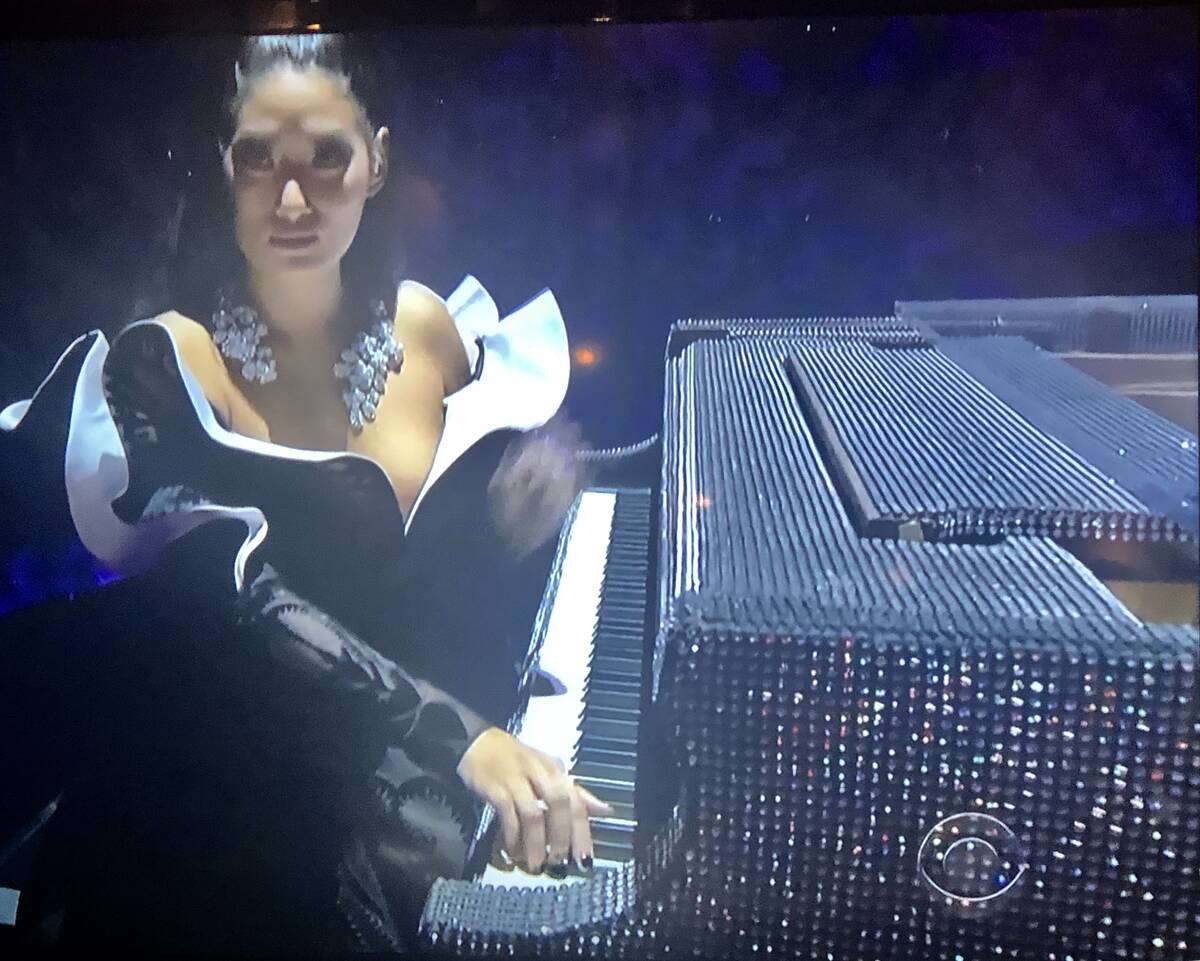 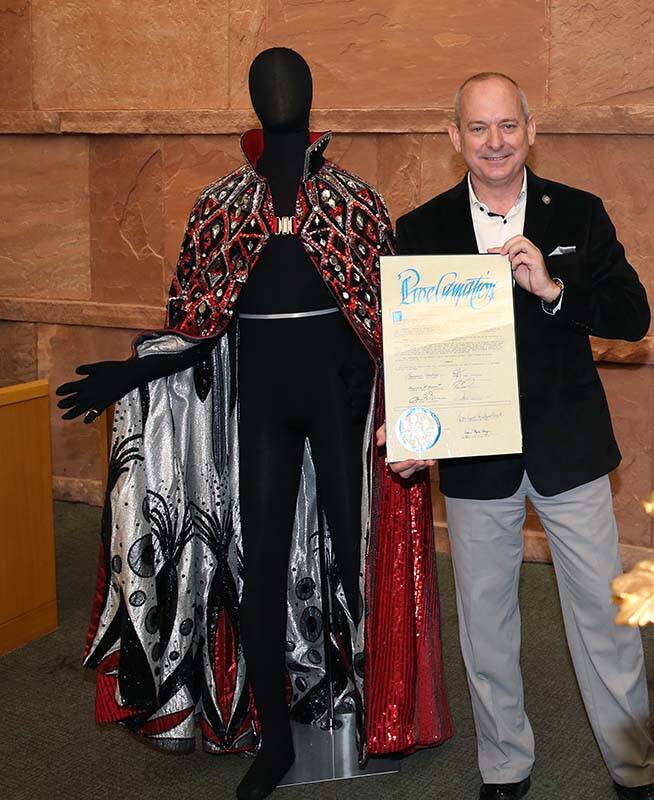 Jonathan Warren, chairman and CEO the Liberace Foundation, poses for a photo between Liberace's outfit after the Clark County commissioners recognized Liberace's birthday and presented the proclamation to Warren during the Commission meeting at the Clark County Government Center on Tuesday, June 4, 2019, in Las Vegas. (Bizuayehu Tesfaye/Las Vegas Review-Journal) @bizutesfaye 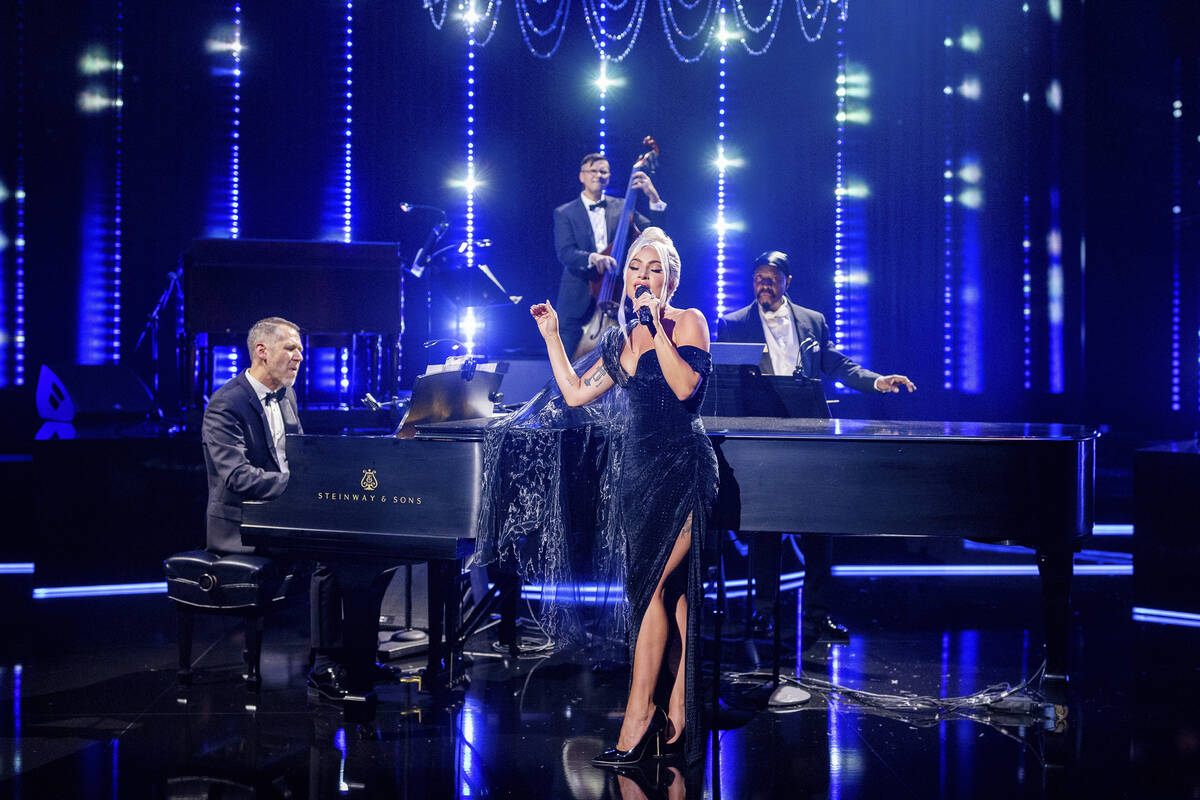 IMAGE DISTRIBUTED FOR WESTFIELD - In this image distributed on Thursday, Sept. 30, 2021, Lady Gaga on stage at a global streaming event brought to fans exclusively by Westfield at Line 204 in Los Angeles to celebrate the launch of her new jazz album with Tony Bennett, Love for Sale. (Photo by Christopher Polk/Invision for Westfield/AP Images)

Liberace knew how to make a show. This is still true, decades after his passing.

The piano that “Mr. Showmanship” played in his final performances is again in play. The Liberace Foundation is offering Lady Gaga the Swarovski-bedazzled Baldwin from Liberace’s last shows at Radio City Music Hall in November 1986. The entertainer died the following February.

Liberace Chairman Jonathan Warren has checked in with the pitch, saying, “I’m hereby offering to loan the Liberace crystal piano to Gaga for her upcoming October residency in Las Vegas. I think Lee would be thrilled to have her haunt like Liberace.”

Lee was Liberace’s nickname, ya see.

Gaga’s “Jazz + Piano” show makes its highly anticipated return to Park Theater on Thursday. The nine shows culminate with a Halloween performance. We have reached out to the superstar to see if she would entertain playing such a piece of entertainment history. Nothing back yet.

Covered in 80,000 crystals, the Baldwin was built especially for Liberace’s sold-out series at Radio City. The piano was displayed at Liberace Museum for years, until that attraction shut down in October 2010. More recently, the Baldwin has been housed and displayed at the Liberace Garage on Dean Martin Drive.

This would not be the first time the Baldwin was rolled back under the spotlight.

Cardi B and the virtuoso Chloe Flower featured the piano during Cardi’s performance of “Money” during the Grammy Awards telecast in February 2019. Cardi crawled across the reinforced, Plexiglas lid.

And Cee Lo Green made the Baldwin swing for the video of his 2011 hit, “I Want You,” a segment filmed at Caesars Palace. Seven years later, Macklemore stopped by the Liberace Garage to play the Baldwin, summoning Liberace’s spirit before “The Adventures of Kesha and Macklemore” performance at Mandalay Bay.

Of course, a cynic would say the Liberace crew is performing a publicity stunt, attempting to generate interest in the Liberace brand. A realist would say that, too. But so what? Liberace was one of the greatest, and flashiest, showmen to grace a Las Vegas stage.

And the Baldwin is a bonafide instrument, The piano is in great shape, having been effectively rebuilt prior to the 2019 Grammys by the pros at Family Music Centers in Las Vegas.

A larger question is whether a musician of Gaga’s caliber would want to play a piano that was built for the 1980s, when she already has the greatest contemporary instruments at her disposal. A classically trained musician, Gaga plays a Steinway that is worth about $250,000 and is likely the finest piano made in America.

An apt comparison would be, would you want to drive a new 2021 Rolls-Royce Phantom, or the mirror-plated 1962 Phantom that famously delivered Liberace to the stage. Warren says that a high roller at Resorts World, where that vehicle is currently on display, recently offered $1 million for the car.

So anything is possible.

We feel essence of Liberace could return, in piano form, for maybe one song in “Jazz + Piano.” Make it “I’ll Be Seeing You,” then send him properly into the night.

Add Marilyn McCoo and Billy Davis Jr. to the list of performers at the 25th Keep Memory Alive Power of Love event Saturday night at Resorts World Las Vegas. The duo hit big with “You Don’t Have to Be a Star,” and prior to that were hitmakers with the 5th Dimension (and that band once played Nero’s Nook at Caesars Palace, for real).

McCoo and Davis returned to the studio after a 30-year hiatus for their latest, “Blackbird: Lennon-McCartney Icons,” covers of 10 classics, from the title song and “Yesterday” to McCartney’s “Silly Love Songs” and Lennon’s “(Just Like) Starting Over.”

Cleveland Clinic Lou Ruvo Center for Brain Health founder Larry Ruvo says this year’s event is especially important to the viability of the medical fortress in Symphony Park. The Center loses money every time it sees a patient. The annual charity gala and concert is the primary event to offset those losses.

“Every time we see a patient, we write off 79 percent, as we collect only 21 percent, which means that we lose millions of dollars every year,” Ruvo says. “The more patients we see, the more money we lose.”

The function of Power of Love is to offset those losses, and keep the Center’s focus on fighting neurocognitive diseases as Alzheimer’s, Parkinson’s, Huntington’s, multiple system atrophy and multiple sclerosis. Safety is, naturally, a priority for Saturdays’s event. All attendees Saturday will be required to confirm proof of being fully vaccinated against COVID-19 by downloading the Clear app, and required to follow mask mandates.

The great comic actor John Di Domenico is stepping up and taking over for yours truly at Saturday night’s Foundation for Assisting Seniors second annual gala at 6 p.m. Oct. 16 at M Resort. I will be otherwise detained on work duty (see above), but Di Domenico and Vegas vocalist Mark OToole are in the program, The night includes dinner, the live performances, and auction action. FAS provides assistance on a per-call basis and serves needs throughout the state.

It’s never a bad night at Stoney’s Rockin’ Country at Town Square. At 7 p.m. Friday’s Jake Rose, who says, “I make music for the front row, not music row.” Advance tickets are $10. Also, line dancing (or, organized grooving) is back at the club at 7:30 p.m. and 8:30 pm. Thursdays through Saturdays. Hit up the club for all intel.