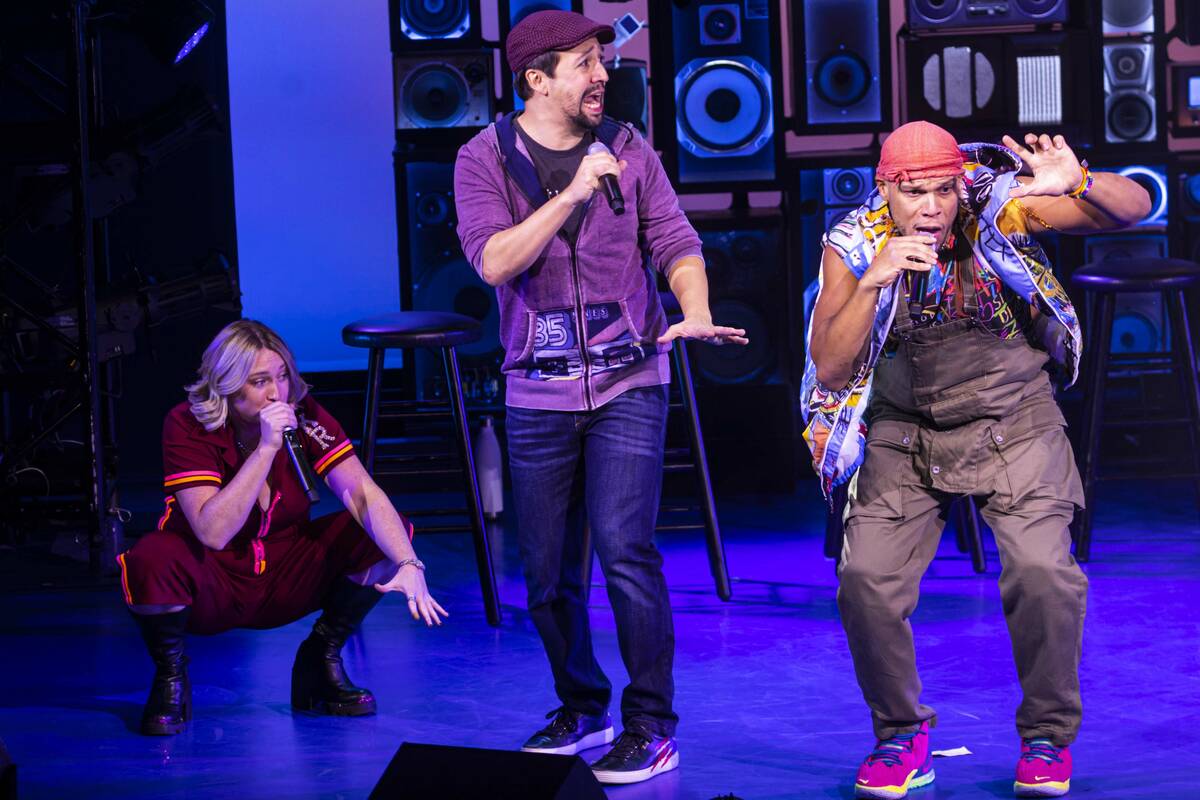 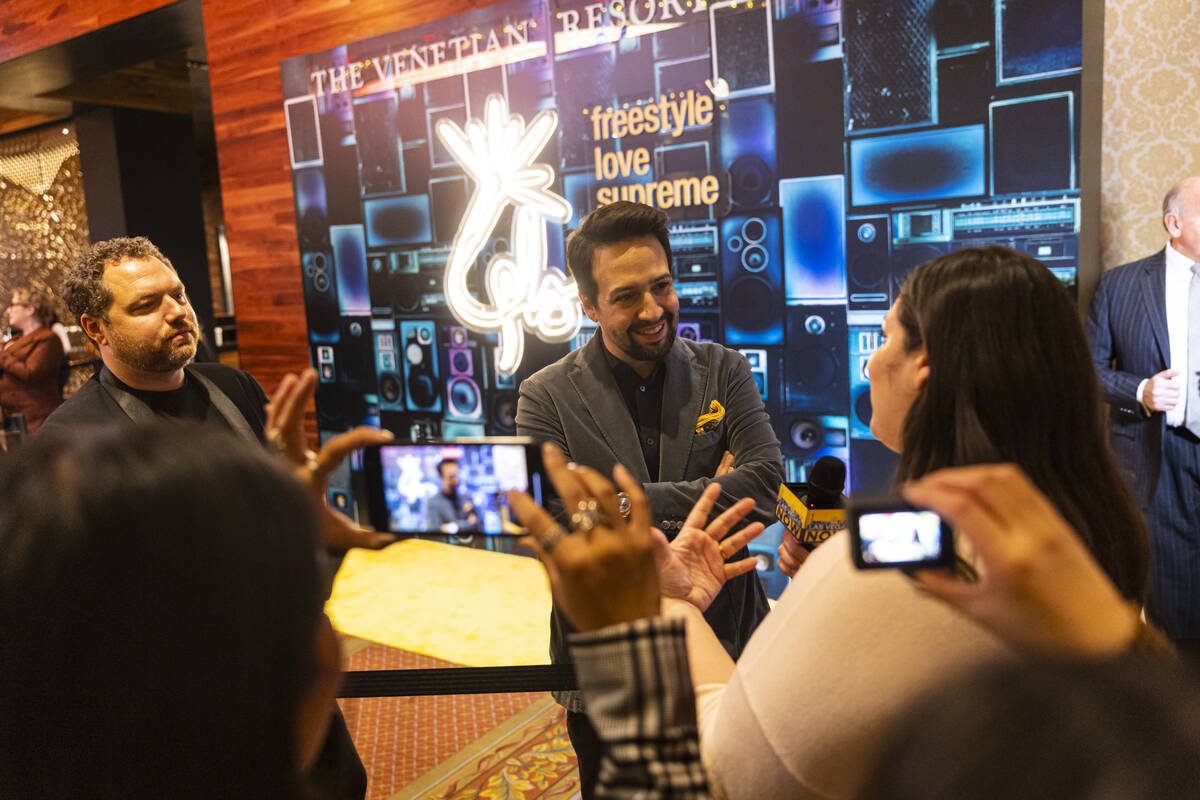 Lin-Manuel Miranda, co-creator of Freestyle Love Supreme, is interviewed before performing with the cast at The Summit Showroom inside The Venetian on Wednesday, Nov. 16, 2022, in Las Vegas. (Chase Stevens/Las Vegas Review-Journal) @csstevensphoto 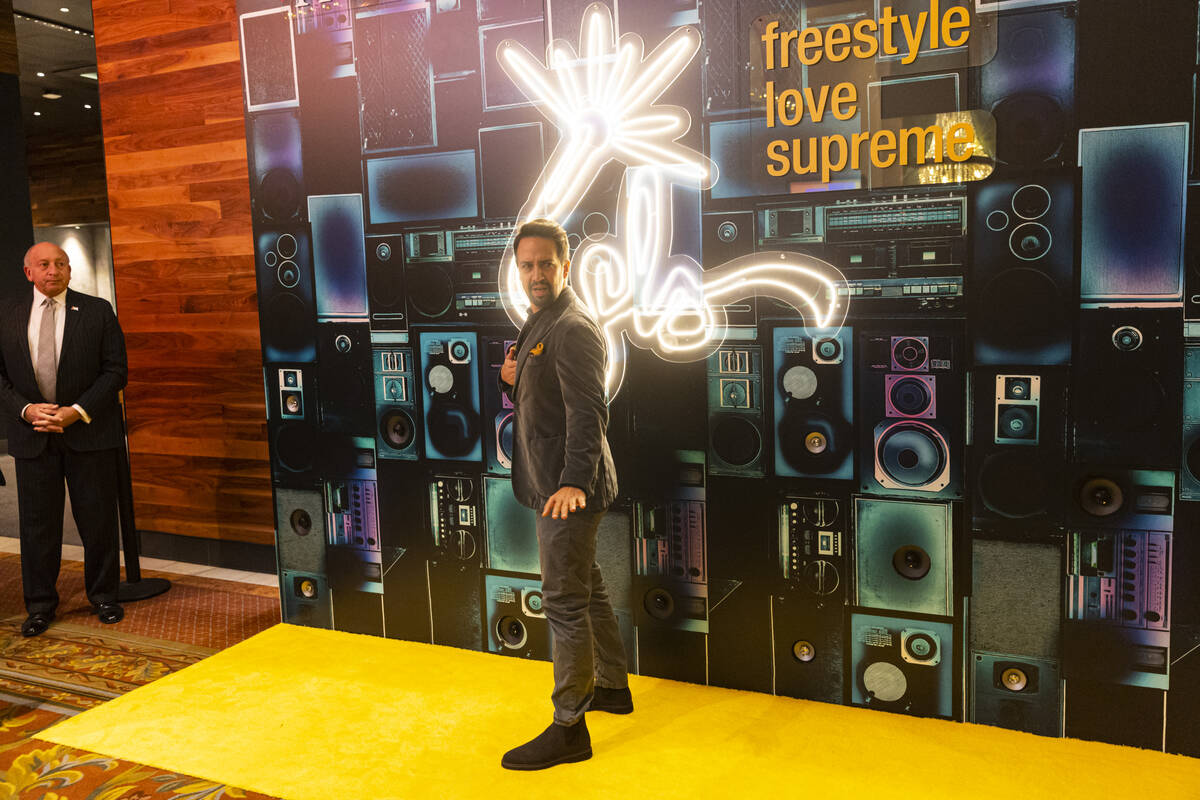 Lin-Manuel Miranda, co-creator of Freestyle Love Supreme, poses for pictures before performing with the cast at The Summit Showroom inside The Venetian on Wednesday, Nov. 16, 2022, in Las Vegas. (Chase Stevens/Las Vegas Review-Journal) @csstevensphoto

Carlos Santana says he wants to connect with Lin-Manuel Miranda. But the rock legend made that connection, spiritually, long ago.

“You have to understand, Carlos Santana is basically like a saint,” Miranda said during a chat at a Palazzo Suite hours before performance in “Freestyle Love Supreme” show at Sands Showroom at The Venetian. “He’s like in sainthood status in my family. That’s not even like an artist. That’s like, the portrait on the wall is next to Jesus.”

Santana was woven into our conversation from an interview in September. The House of Blues headliner said at the time he’d been up the night before, thinking about a rock musical he’s been developing, titled “Ritual.”

Santana has recorded some African-gospel pieces for the project, which his to invoke images of those who adhere to rituals, from the pope to soccer moms, as he stated.

“I don’t want it to sound like I’m boasting, but with total conviction and affirmation, I have something that will be bigger than ‘Lion King’ or ‘Hamilton.’ ” Santana said. At that point, he confided, ‘I’m gonna need to hook up with Lin-Manuel.’”

Miranda smiled as he processed this development.

“I would take that phone call, yeah, absolutely,” he says. “I would always consider anything Carlos had to say to me. It’s very surreal to even know that someone like that knows who you are. Full stop.”

Consider the project, and conversation, “Ongoing.”

Miranda remembered a visit to Vegas when he was a kid.

“I saw ‘O,’ when I was here with my grandma, and I have never seen a man on fire for that long,” he said, recalling one of the Cirque show’s more dramatic moments. “I still have questions. Like, I couldn’t wrap my head around the rest of it. But I know how hard it is to be on fire, and I do not understand how that man was on fire for that long, and how he does it nine times a week.”

Again, with the Rat Pack

Miranda is among the superstars who tap into the Rat Pack lineage in Vegas.

Miranda has a bit of swagger, we’ll say that. He’s also bringing “FLS” into the very property where the Sands Copa Room stood, the fabled home of Frank Sinatra, Dean Martin and Sammy Davis Jr.

“It’s an it’s incredible heritage, and the fact that it’s a place where you and your fan base can really find each other is really special,” Miranda said. “That’s what’s really exciting about the promise of Las Vegas. I’m hoping that ‘Freestyle’ can find that space in the same way, and word will spread just from the experience folks have at the show.”

Bronx Wanderers have unveiled their grandiose plans to shuffle from Westgate Cabaret to South Point Showroom in February. The guys will perform three shows per month there, as we reported some time ago, while making bank on the road. It’s a far more sensible strategy, financially and even spiritually, than five shows per week at the Westgate. Plus, the schedule keeps Vincent John fresh for his many personal appearances around town.

As the rocking Adinolfis relocate, Westgate is going with Comedy Cabaret, a new comedy project from Doug Miranda, who also produces Soul of Motown at the Cabaret. The club is set to open the week after the Super Bowl, running 10 p.m. Thursdays, Fridays and Saturdays. Miranda is looking for headliners, so Vegas comics, opportunity knocks.