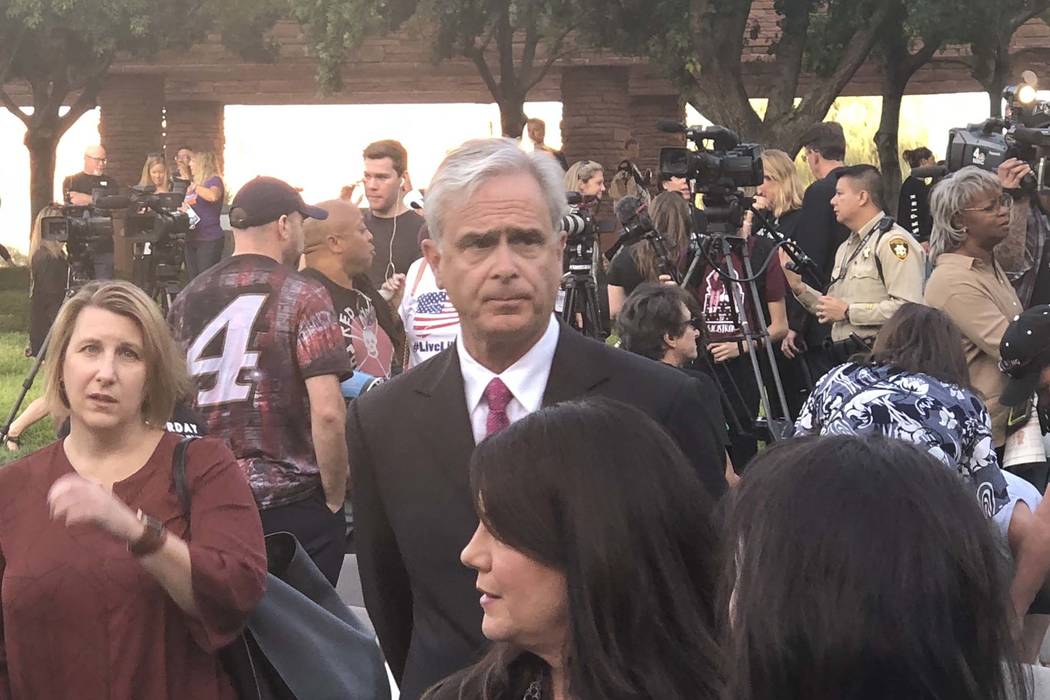 The resort leader who was a solitary figure late at night on Oct. 1 has learned there is strength in numbers.

“One thing I’ve learned in the past year is, you can’t do it alone,” Mandalay Bay President and Chief Operating Officer Chuck Bowling said this morning at an Oct. 1 sunrise remembrance at the Clark County Government Center Amphitheater. “To be a strong leader, you need to collect the team and pull it together. You lean on each other, pray with each other, hug with each other and know there is a better tomorrow.”

Bowling was called to the hotel in the minutes after gunfire was heard from a 32nd-floor luxury suite. He arrived as Mandalay Bay employee and guests were being herded into basements, closets, back into hotel rooms or secured in restaurants and MJ One Theater.

The scene was morbidly quiet until after sunrise. Bowling walked into the hotel’s main lobby, always teeming with tourists — except the night of Oct. 1.

“We’re used to being, in Las Vegas, around thousands or even tens of thousands of people around us on a given day,” Bowling said. “To find myself in the lobby, with nobody around, was a very scary and lonely feeling. But within hours, days and weeks you feel the togetherness of our city, and for every bad story you heard there are three stories about the humanity of Las Vegas.”

Bowling says there is no plan for a permanent Oct. 1 memorial at his hotel.

“We’re participating in the community events around the city, like this one today, which was so well done,” he said. “That’s what I am doing today, and walking the property to make sure our employees have someone to talk and know where to go for support.”

The veteran resort executive, a Las Vegas resident for 20 years, says life is returning to normal at Mandalay Bay.

“There is a lot of strength, a lot of business, that has come back,” Bowling said. “People want to do come here and do business and have fun. That is what Las Vegas is about. We need to stay true to that.”