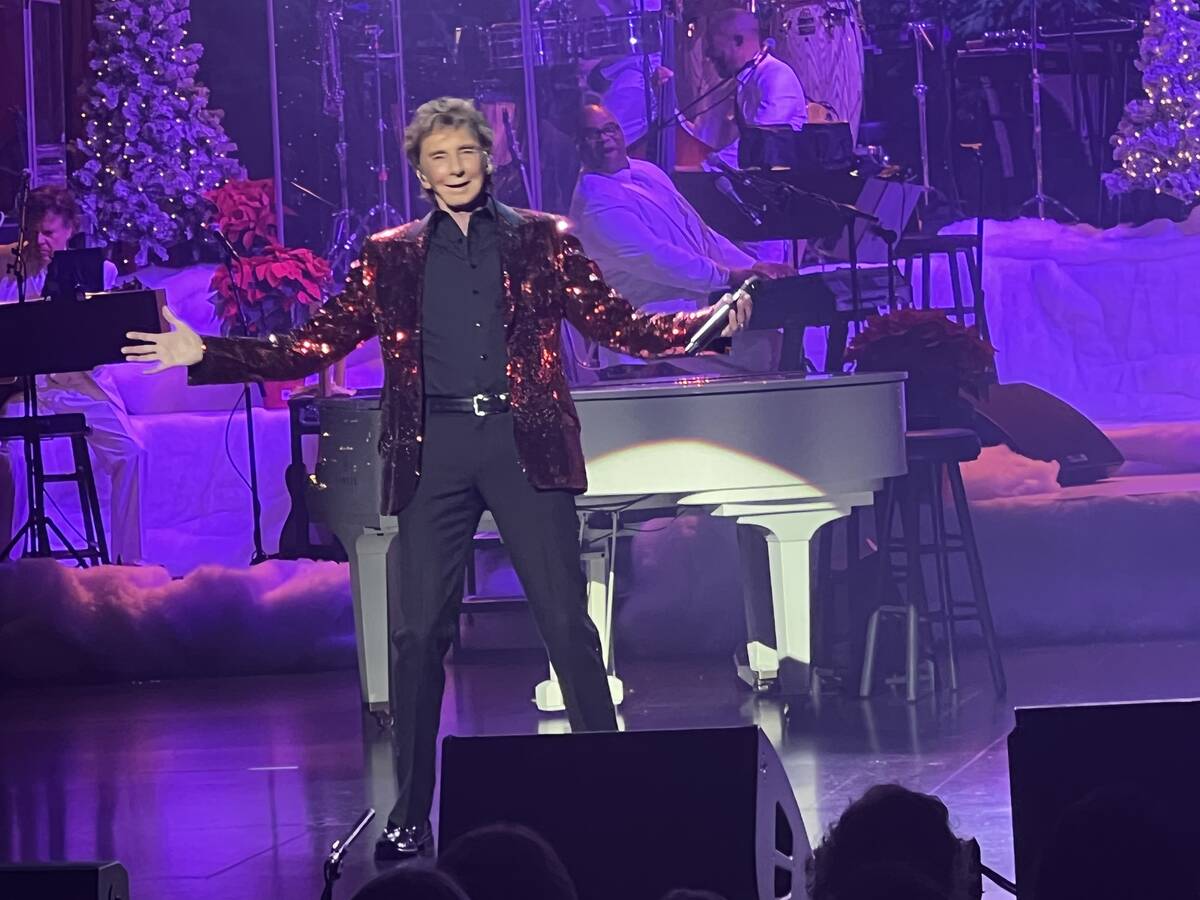 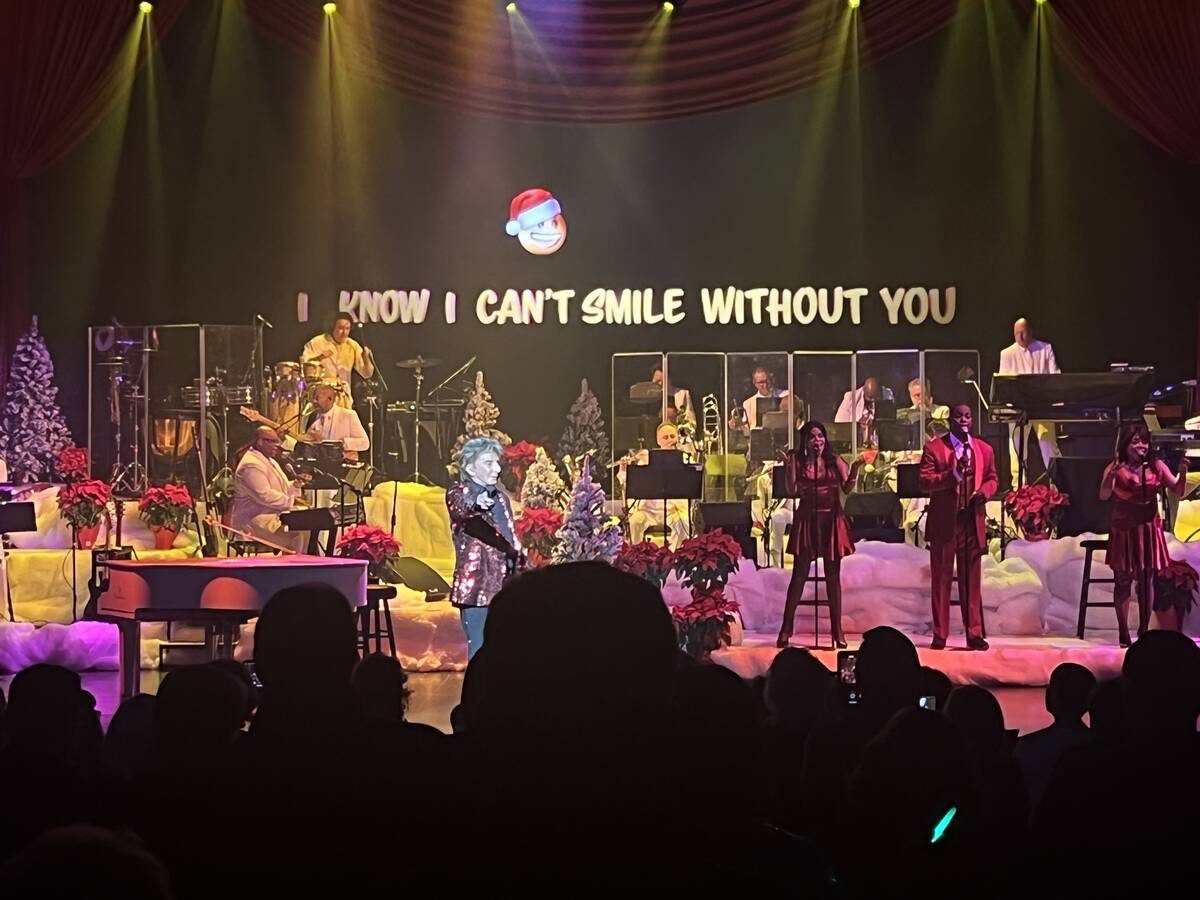 The Kats! Bureau is at International Theater at the Westgate, where the holiday showman just strode onstage, sang a chipper tune, then said, “Well, last night sucked!”

Yep, Barry Manilow is back. The superstar had spent some of Thursday hospitalized, relating “There I was, having a baby, and … But I’m fine! I’m fine! You can tell I’m fine! Don’t worry about me! I was worried about you guys!”

There was a cheer. Then Manilow turned it on for, “Rudolph the Red-Nosed Reindeer,” stirred with, “I Can’t Smile Without You,” “I’ve Got My Love To Keep Me Warm,” and “Singing To The World.”

This is “A Very Barry Christmas,” where Manilow delivers his hits alongside holiday classics. The set was set by a warm, video-projected fireplace; five Christmas trees; just enough poinsettias and snow that looks like piles of cotton. Oh, and more fake snow, falling gently from the balcony, a typical holiday experience in VegasVille.

The 79-year-old superstar had missed Thursday’s holiday opener after suffering a case of atrial fibrillation (AFib), which is an abnormal heartbeat. Manilow actually made his own heart race. He was zapped with a defibrillator, and was back in his sequined red jacked by Friday’s 4 p.m. start.

Manilow was spot-on musically, even if not on always on his spot onstage. Early he grabbed a stool and moved toward the crowd, then stopped and said, “Wait. I’m on the wrong spot.” He moved and asked the crowd, “Is this the middle?”

The crowd shouted, “Yes!” To the assembled Fanilows, he was in the right place.

Manilow returned to some hospital shtick later in the show. It’s an anecdote he recites every show, about the bookings he took when working his way through The Julliard School.

With a lift from the Monaco Middle School choir … @barrymanilow is back for the holidays. So cheer up … #RJNow @reviewjournal @WestgateVegas pic.twitter.com/Q7LkYKO2nD

We do. That was the production show at MGM Grand, which originally ran from March 1995 through New Year’s Eve 2002. Michael Crawford was the original star, but suffered chronic injuries because of the show’s demanding stunts. He finally left, and there was talk of completely remaking the show for Manilow. He would sing and introduce acts as host of his own Vegas production.

It sounded tantalizing, and also lucrative, but Manilow finally turned down the offer to continue his touring and recording career.

The entertainer who was hired instead? David Cassidy. He was followed by Tommy Tune and, finally, Rick Springfield in the show that pre-dated “Ka” in the same theater.

Tower of Power, the Bay Area band that is a favorite of musicians across Las Vegas, and also Raiders owner Al Davis, will play the national anthem at Sunday’s Raiders-Chargers tilt at Allegiant Stadium. We anticipate TOP will return for a halftime show.

And the Raiders are also planning a uniquely produced tribute to the late Cliff Branch. This will be unlike anything you see at an NFL game. It will be cool. The franchise takes the entire game experience seriously.

King of Country George Strait is to be honored with a star on the Las Vegas Walk of Stars sometime in 2023. We know this, because we have his duplicate, framed star in our possession, ready to present it for the formal announcement. Strait is spinning his hits at T-Mobile Arena this weekend.

We expect a Vegas-set cable series to be extended by at least one season, soon.

The band has added Vegas flair with backing dancers Dani Elizabeth, Katie Matthews and Brittany Dunn. The Venetian is the only place you can catch this particular treatment, and it is wild.

Murray for the holidays

On the topic of Elizabeth, here’s something about her husband …

Laugh Factory at the Tropicana headliner and “Fantasy” at Luxor feature act Murray Sawchuck’s concert special is out. “Murray The Magician: Itz Gone, Live From Las Vegas” is the succinct title (somewhere in there is Sawchuck’s vanity plate). Find this performance on the Tubi streaming service.

On the topic of Sawchuck, yours truly has written a line into his “Fantasy” performance. Really. I thought of it as I walked out of the “Fantasy” anniversary show, and saw the sign for the new King Tut exhibit across from Atrium Showroom. It’s a play on words, kids.

Pop-opera artist and wondrous chef Giada Valenti has released her Christmas single, “Winter Star.” This release has ample pedigree. The strings are from the Royal Philharmonic Orchestra, recorded at Abby Road Studios.

The Las Vegas Jazz Society hosts a talent-stacked show from 1 p.m.-3 p.m. Sunday at Bootlegger Bistro. This time out it’s the Ronnie Rose Quintet, with Dave Ostrem on bass, Ocho Arbe on piano, Carlos Mata on sax and Mark Barrett on drums. Tickets are $25, $20 for LVJS members, available at lvjs.org, cash or check (!) at the door.

And, know that one of those musicians once served as The Unknown Comic’s understudy. Google it, and you’ll learn who.