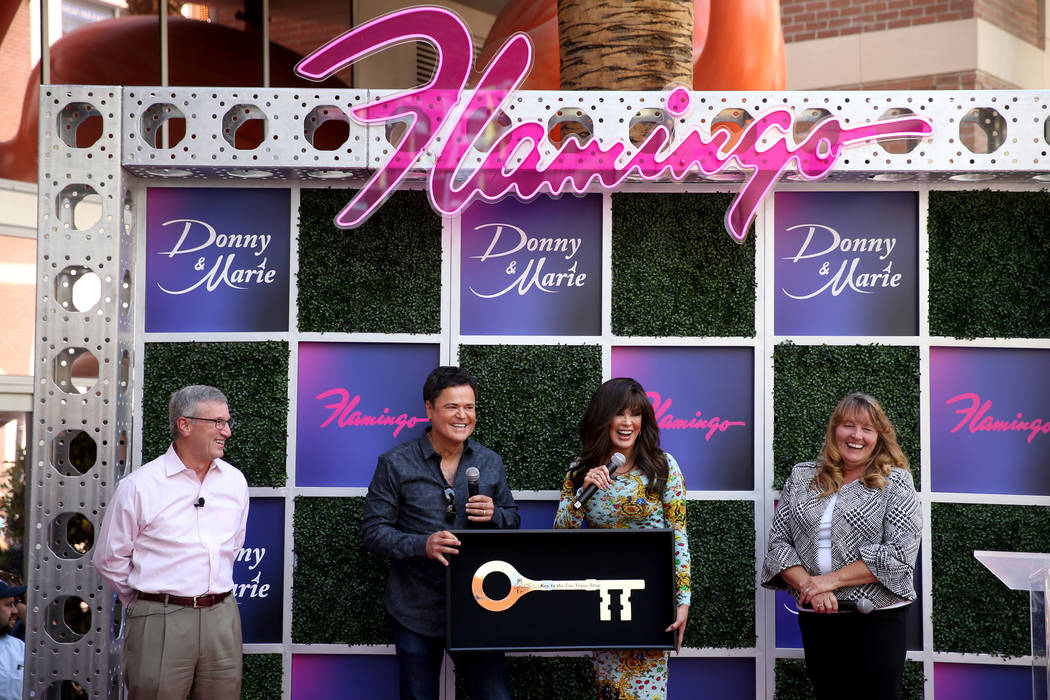 Strip headliners Donny and Marie Osmond receive a Key to The Las Vegas Strip as Caesars Entertainment CEO Tony Rodio and Clark County Commission Chairwoman Marilyn Kirkpatrick look on during a ceremony at the Flamingo Las Vegas Friday, Aug. 23, 2019. Signed for six weeks in September 2008, the siblings have extended their stay again and again. Their residency comes to an end on Nov. 16. (K.M. Cannon/Las Vegas Review-Journal) @KMCannonPhoto

Sharon Osbourne’s new face was the talk of “The Talk” Monday, but Marie Osmond’s banged-up knees also were a lively topic.

Debuting as co-host Monday on the CBS daytime talk show, Osmond disclosed that she had fallen during a recent performance with her brother, Donny, at Flamingo Las Vegas. She told the studio and TV audience she had tumbled while dancing in her knee-high boots.

The incident occurred during the opening of the show Sept. 3, a performance that continued without interruption.

“Donny and I have a bet,” Osmond said. “If you have an accident and don’t keep singing, you have to pay the other $500.”

Osmond wore a wrap around her right knee during the broadcast. She also said that Donny sent flowers backstage before the show. Donny & Marie are closing an 11-year run at Flamingo in November.

“I just want to tell him, I love you, my brother,” she said, choking up. “We tease each other a lot. We are kinda like Mutt and Jeff, Pete and Repeat. I just love him, and he’s just so supportive and sweet.”

Osmond had earlier said of Osbourne’s cosmetic surgery, “The show is getting a new face with me, and a new face with Sharon.” Osbourne talked of her recent work, which was very apparent to anyone who has seen her on the show.

“I don’t look tired,” Osbourne said. “It’s like he pulled up from the top with an elastic band. Everything looks more refreshed.” Catch all the haps on the full episode at cbs.com/the_talk.