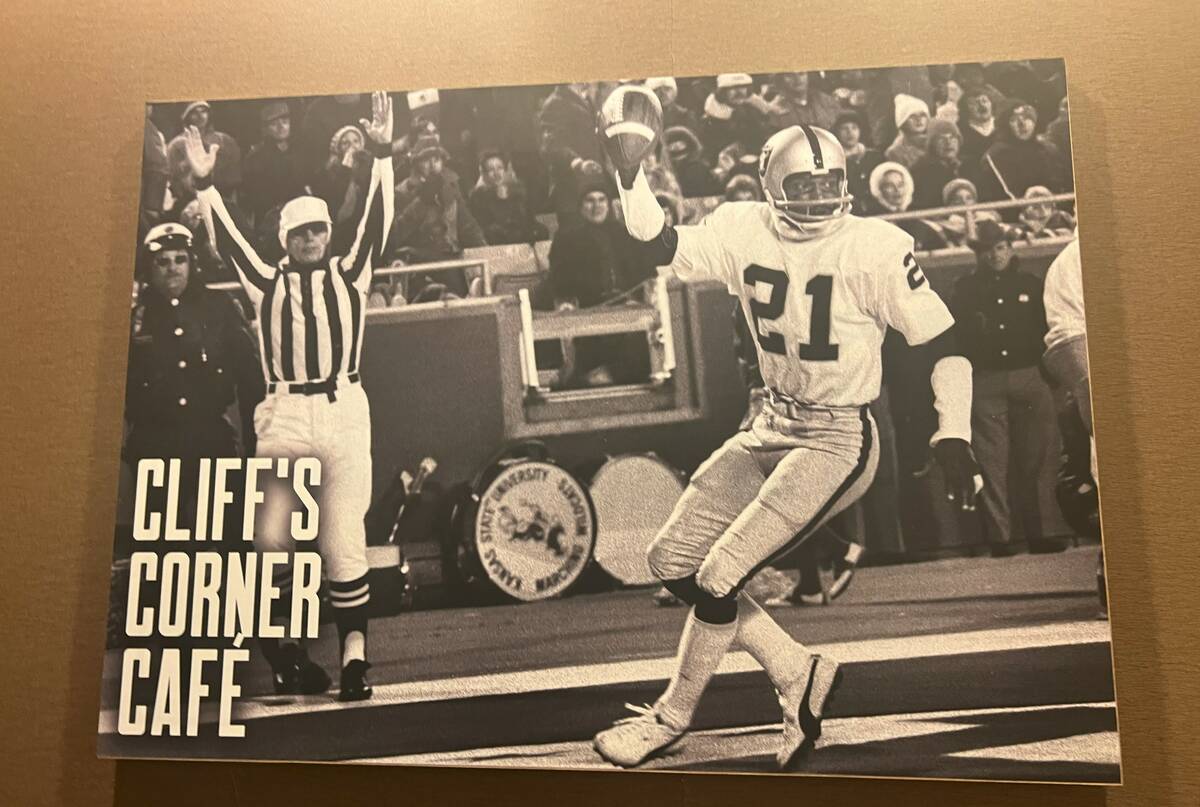 A shot of "Cliff's Corner Cafe," an homage to Cliff Branch, at the Raiders' headquarters in Canton, Ohio. (John Katsilometes/Las Vegas Review-Journal) @JohnnyKats 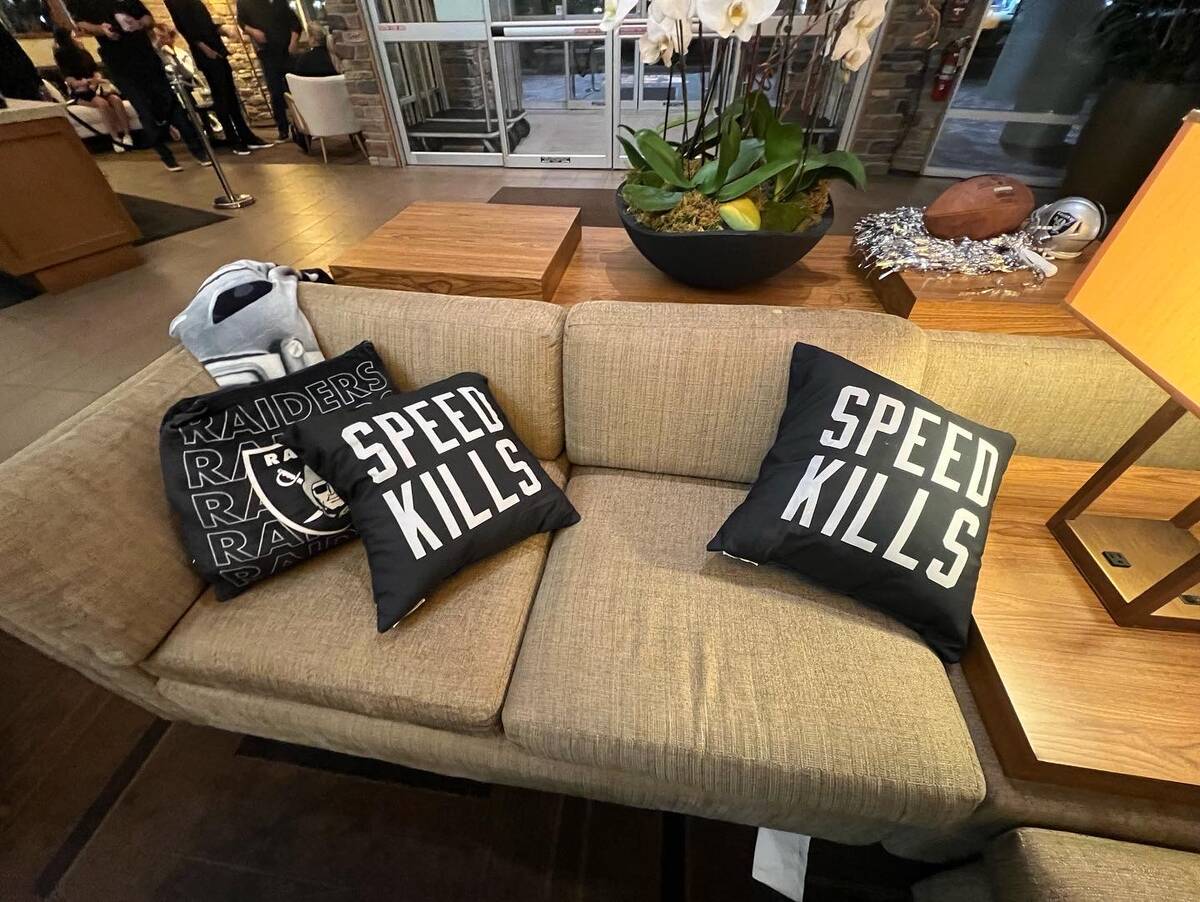 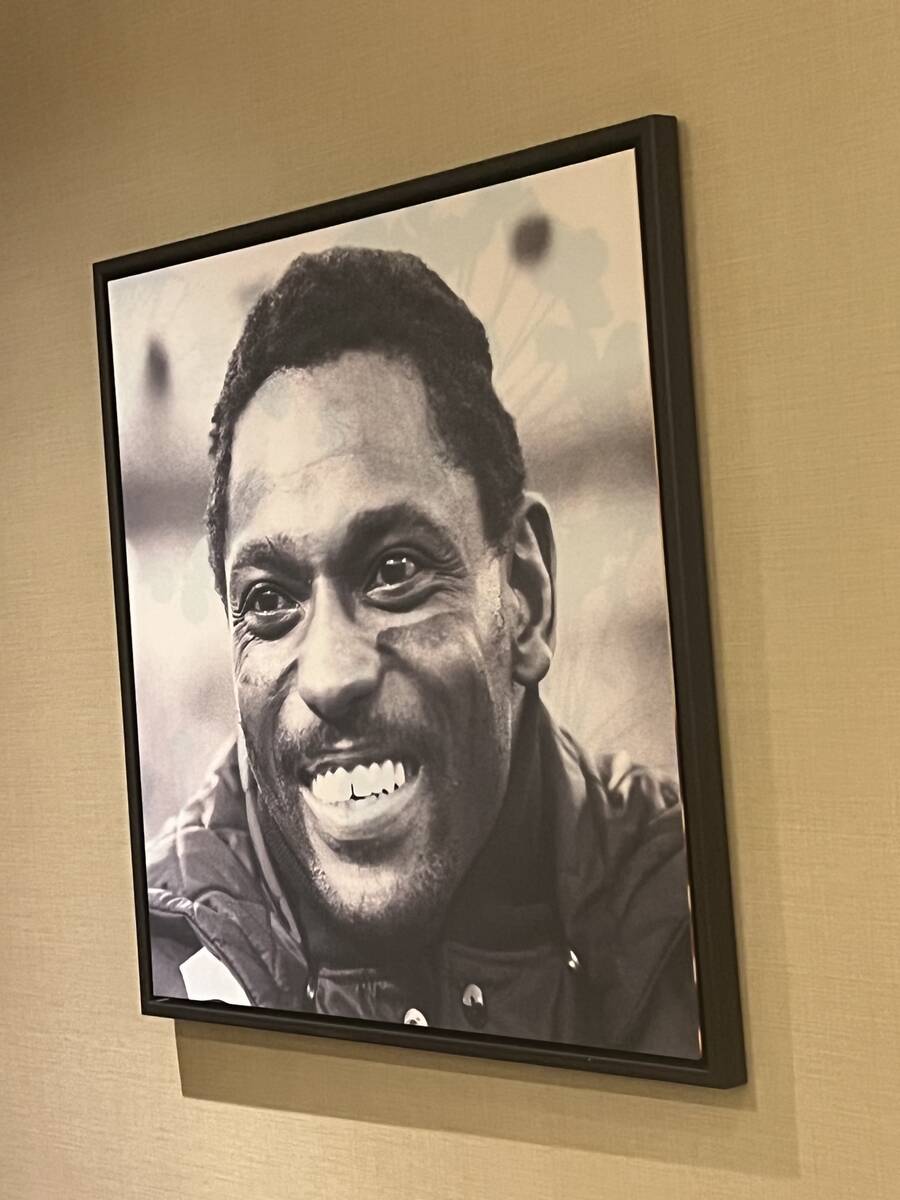 A portrait of Cliff Branch in the men's room at the Raiders' headquarters in Canton, Ohio. (John Katsilometes/Las Vegas Review-Journal) @JohnnyKats 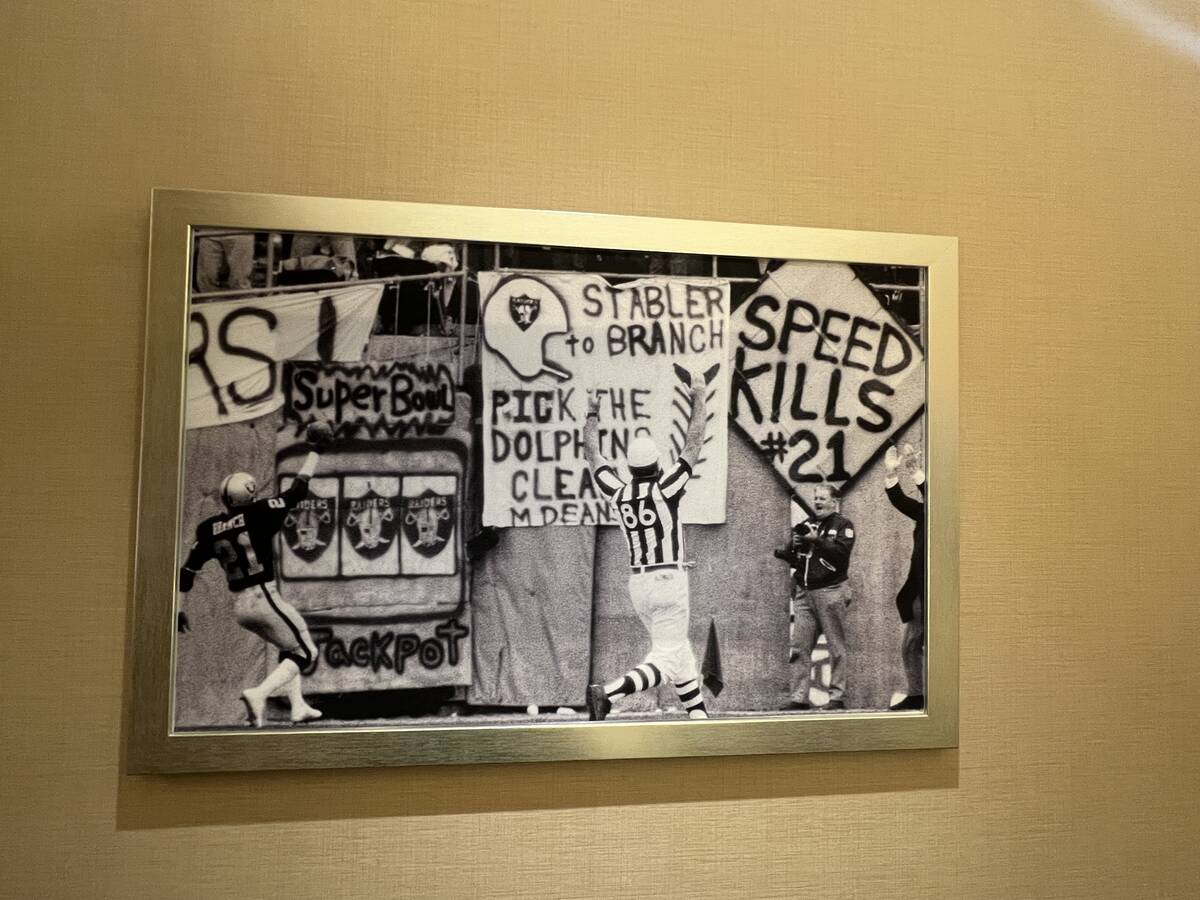 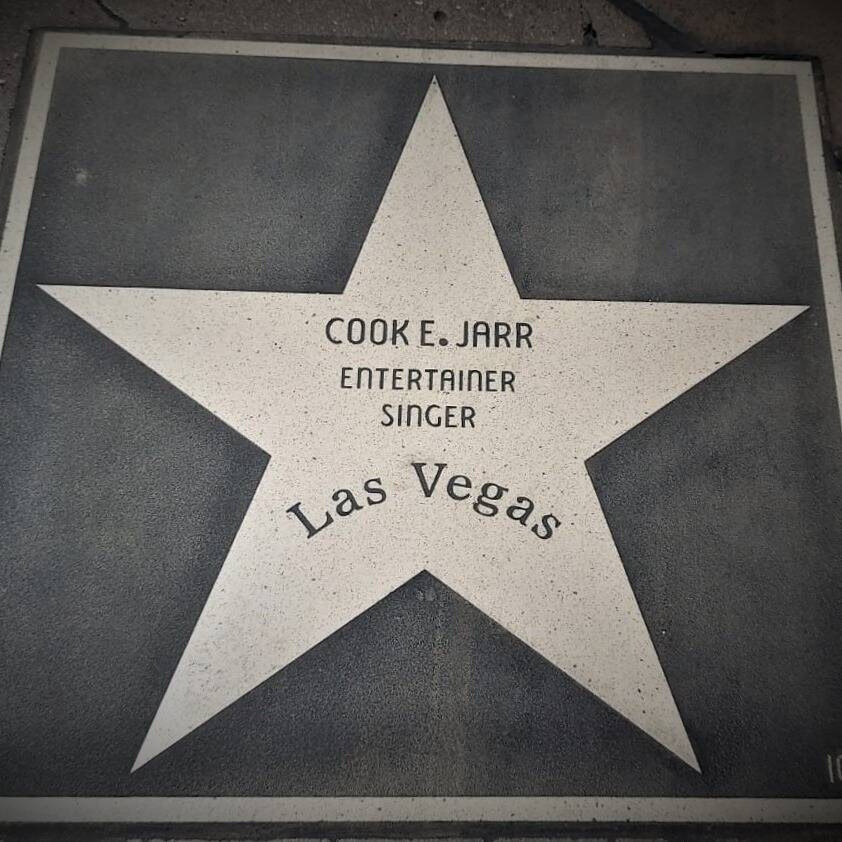 A photo of Cook E. Jarr's Las Vegas walk of Stars honor. Jarr was awarded the star, which is placed at the base of the Paris Las Vegas Eiffel Tower, on April 12, 2022. (Mark Block) 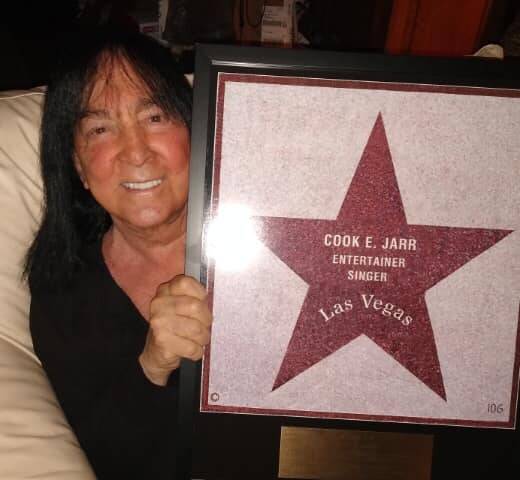 Vegas lounge legend Cook E. Jarr is shown with a framed replica of his Las Vegas walk of Stars honor. Jarr was awarded the star, which is placed at the base of the Paris Las Vegas Eiffel Tower, on April 12, 2022. (Mark Block)

CANTON, Ohio — The Kats! Bureau at this writing is the press box for the Pro Football Hall of Fame game at Tom Benson Stadium.

This place is a short walk from many quaint neighborhoods. It seems all of them are offering paid parking.

The Raiders are playing the Jaguars in the annual preseason lid-lifter. The start of the game was delayed because of a thunderstorm.

Cliff Branch is being enshrined Saturday, but that’s not enough for Raiders owner Mark Davis. Branch was Davis’ best friend up until Branch’s death in August 2019.

So Davis has turned the team’s hotel in Canton into the Cliff Branch Resort (our title, not official). The great receiver’s image is omnipresent. He’s shown on the walls in the lobby, at the breakfast cafe (renamed the Cliff ‘s Corner Cafe), on the elevators, even on framed portraits in the lavatories.

A silver-and-black, No. 21 balloon display (suitable for social-media pics and videos), has been set up in the lobby. Several “Speed Kills” throw pillows were tossed across the sofas at the entrance. Even the guest rooms are the Branch/Raiders decor.

The result is a widespread, Raider makeover. Davis, and the franchise, waited long time to see Branch honored. The owner is making it count.

On the topic of makeovers …

Former teen pop idol and current Vegas resident Debbie Gibson is the subject of Friday’s episode of the CBS series “Secret Celebrity Renovation.” The show gives entertainment and sports celebs the chance to pay back someone who has been especially important in their lives. NBA legend, businessman and part-time Vegas resident Shaquille O’Neal, Nicole Scherzinger of Pussycat Dolls fame and L.A. Rams sack master Aaron Donald are among the this season’s subjects.

Gibson designated her longtime friend and manager, Heather Moore. Gibson’s mother and then-manager, Diane, met Moore 1994, when Moore managed the country music nightclub Denim & Diamonds in New York. With her knack for management (and sharing Diane’s fondness for country music), Moore became part of the Gibson inner circle. She took over management of Gibson’s career in 2011.

At Gibson’s urging, “Secret Celebrity” crew exhaustively renovated Moore’s ranch-style home in Long Island. The house was where Gibson stayed as she fought Lyme disease, which hindered her career for about five years beginning in 2013.

“Heather has seen me through a lot of hard times,” Gibson said in a phone chat Thursday. “I slept on her couch many, many times while I was treatment.”

The show also follows Gibson on a tour of her hometown of Merrick, Long Island. She is filmed while celebrating the upcoming 35th anniversary of “Out of the Blue” at her alma mater, Calhoun High School.

Gibson herself wielded power tools, including a tile saw. “We went from cherry to cheery,” Gibson said. “Heather had a lot of cherry wood, which had become kind of dated and gloomy. So we went with something different, modern-farmhouse.”

Gibson’s reaction when Moore first sees the improvement is powerful and authentic. “I wanted to be able to repay her,” Gibson said. “It felt so great to be able to splurge on someone who is really like family.”

One way to rock … Next year

The Red Rocker, Sammy Hagar, has reportedly tabled plans for a November return to The Strat Showroom. Guy’s gotta recharge. Look for him in 2023 (I will be), but his return is not confirmed.

Flick the Vic in October

Look for a mid-October opening for Vic’s Jazz Italian Bistro at Symphony Park. That’s pushed back from our most recent update, which had the place launching this month. Club proprietor Chris Lowden reports the opening hinges on shipment schedules. Deliveries before delivering, in other words.

We finally heard from Vegas lounge icon Cook E. Jarr this week. He texted response to innumerable — innumerable, I tell you! — requests for his thoughts about being honored by the Las Vegas Walk of Stars.

The result of a $20,000 fundraising campaign led by Jarr fan Mark Block, the star was finally awarded in April. The ceremony was held overnight on April 12. No public notice. No private invitations. No hassles, man.

But Jarr, who is 81 and has recently battled several maladies (including hip replacement), texted he was happy with the honor. “Wow! I am on Cloud 9, buddy. My star’s right in front of the Eiffel Tower where thousands of people are walking. There I am, forever. I can’t tell you how good I feel about that. I feel like I’ve died and gone to heaven.”

Jarr has lived in Vegas since 1982, when he opened at the Sands, along with his backing band The Krums. Jarr has gone on to headline at such famed Vegas hotels as the El Rancho (after it was rebranded from the Thunderbird), Dunes, Tropicana, Continental and Caesars Palace.

He has not performed since a regular Monday-night gig at Napoleon’s at the Paris.

Jarr might not perform full-time again, sadly. But find his 2009 appearance on “Jimmy Kimmel Live” on YouTube, and thank me later.

Don’t let the smooth name fool you. Or, go ahead. None of my business. But know that Velvet Elvis, delivers the ’80s-’90s rock and hip-hop at 8 p.m. Saturday at Sunset Station’s Club Madrid. This is Rockie Brown, Brandon Nix, Jason Tanzer, Jon Wozniak and Carl Collison. Talent, across the board. Gotta be at least 21 to enter and groove. No cover.