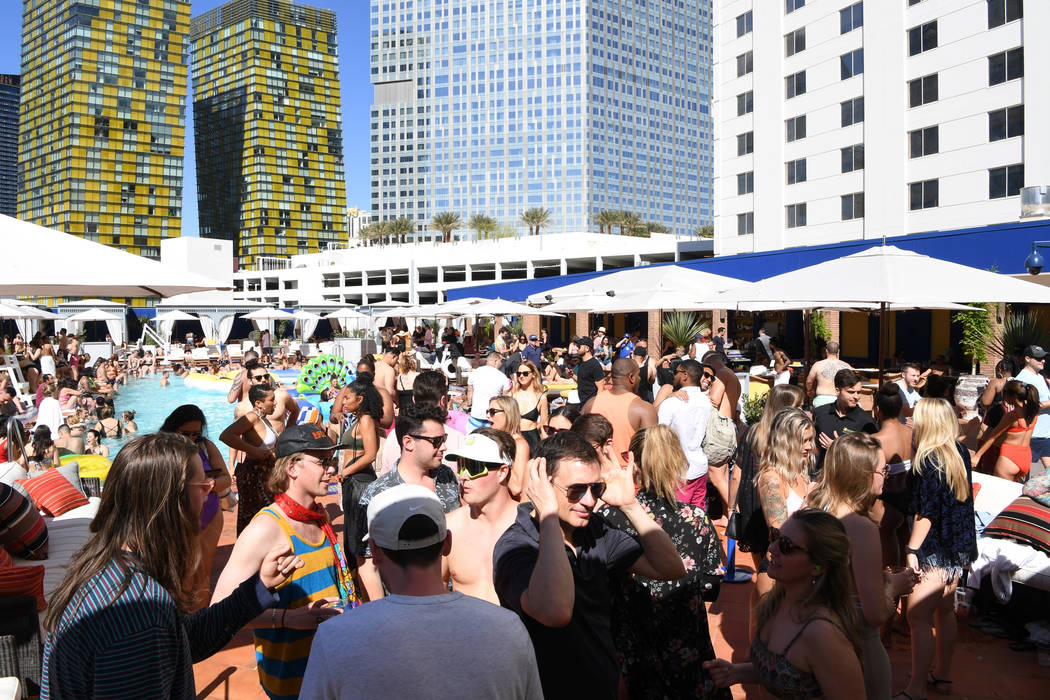 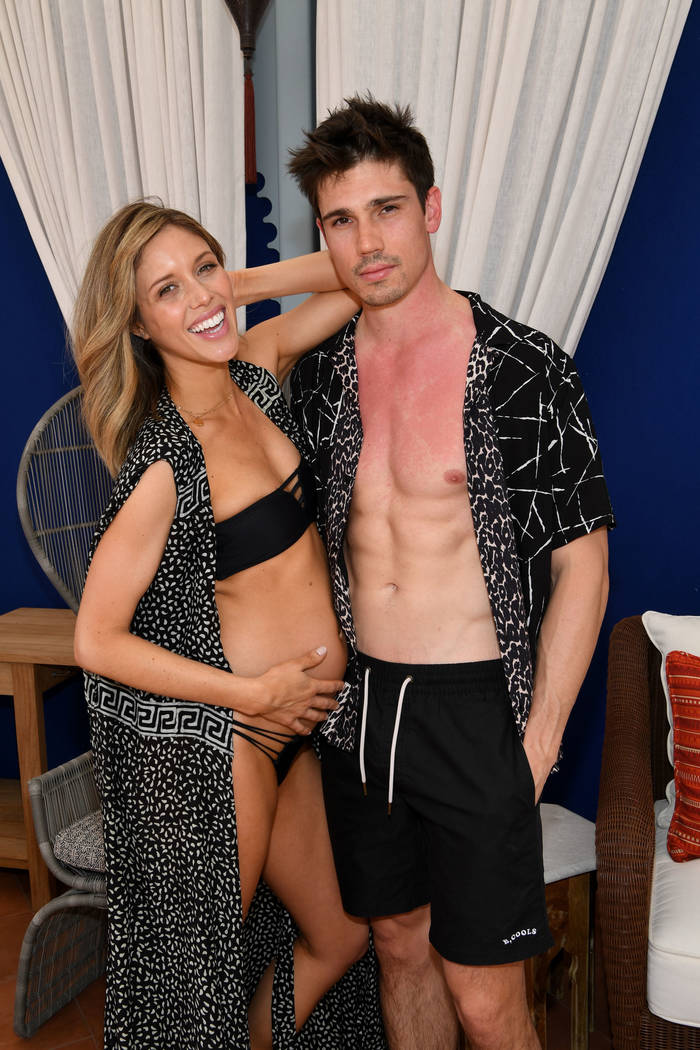 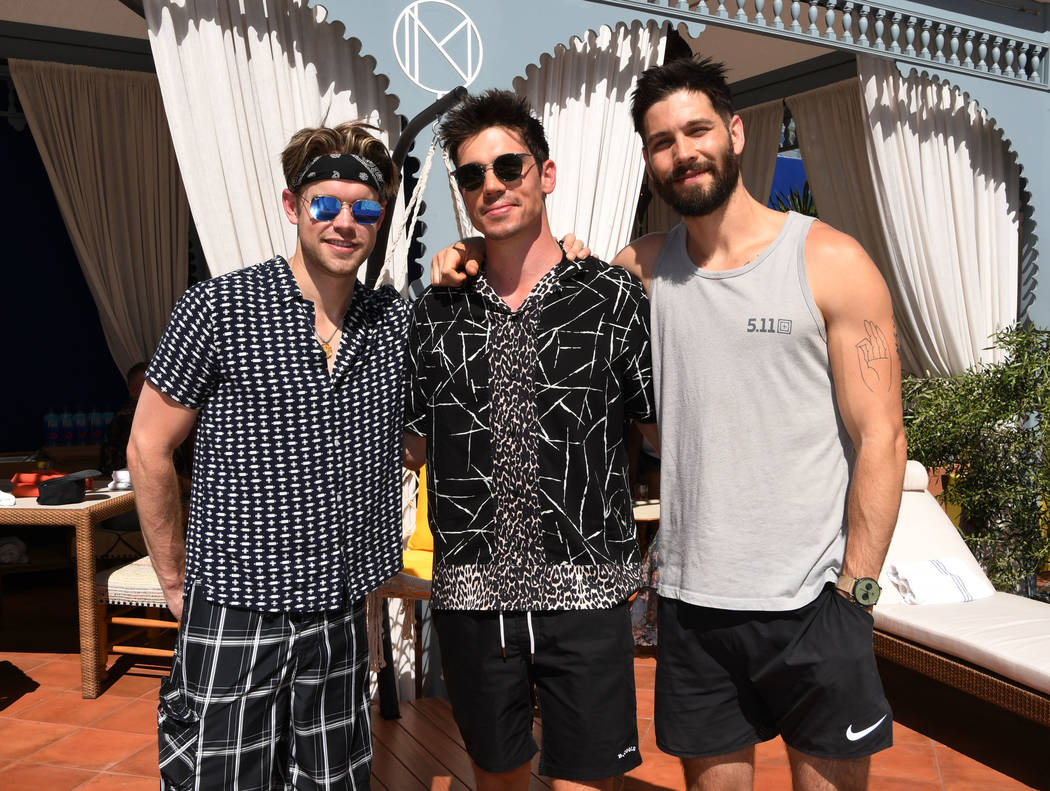 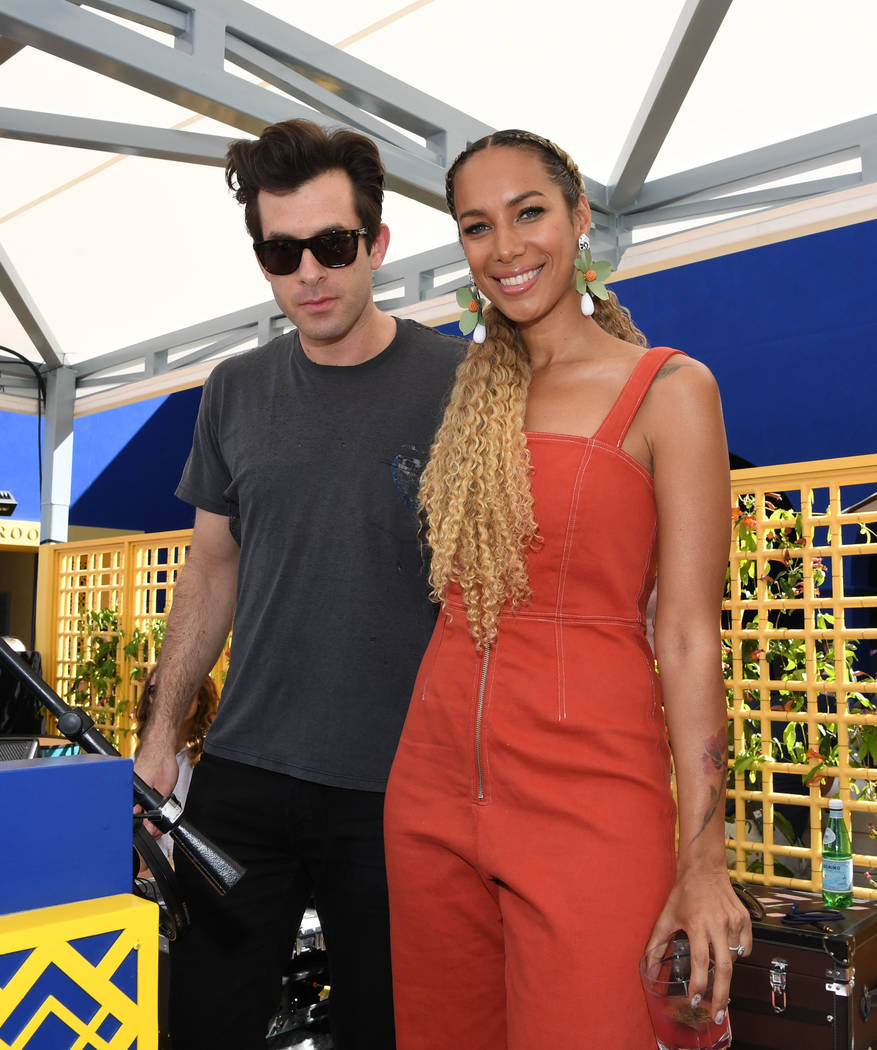 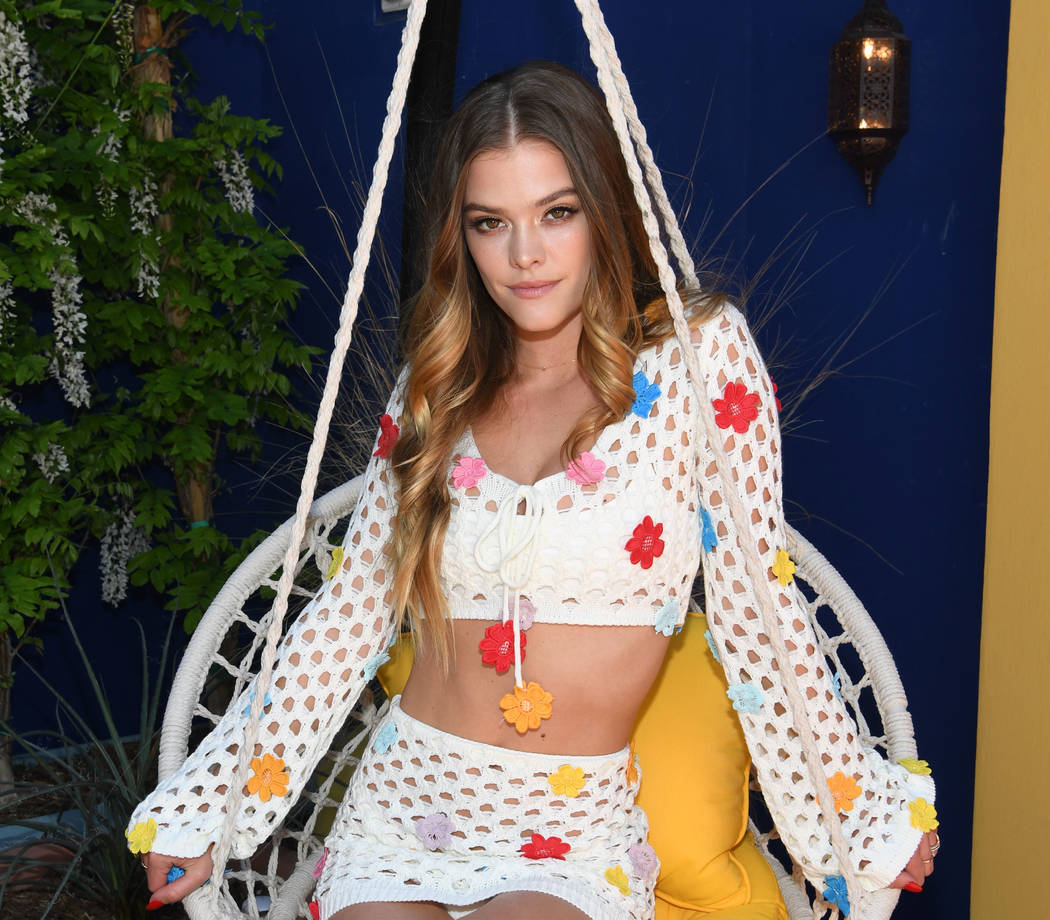 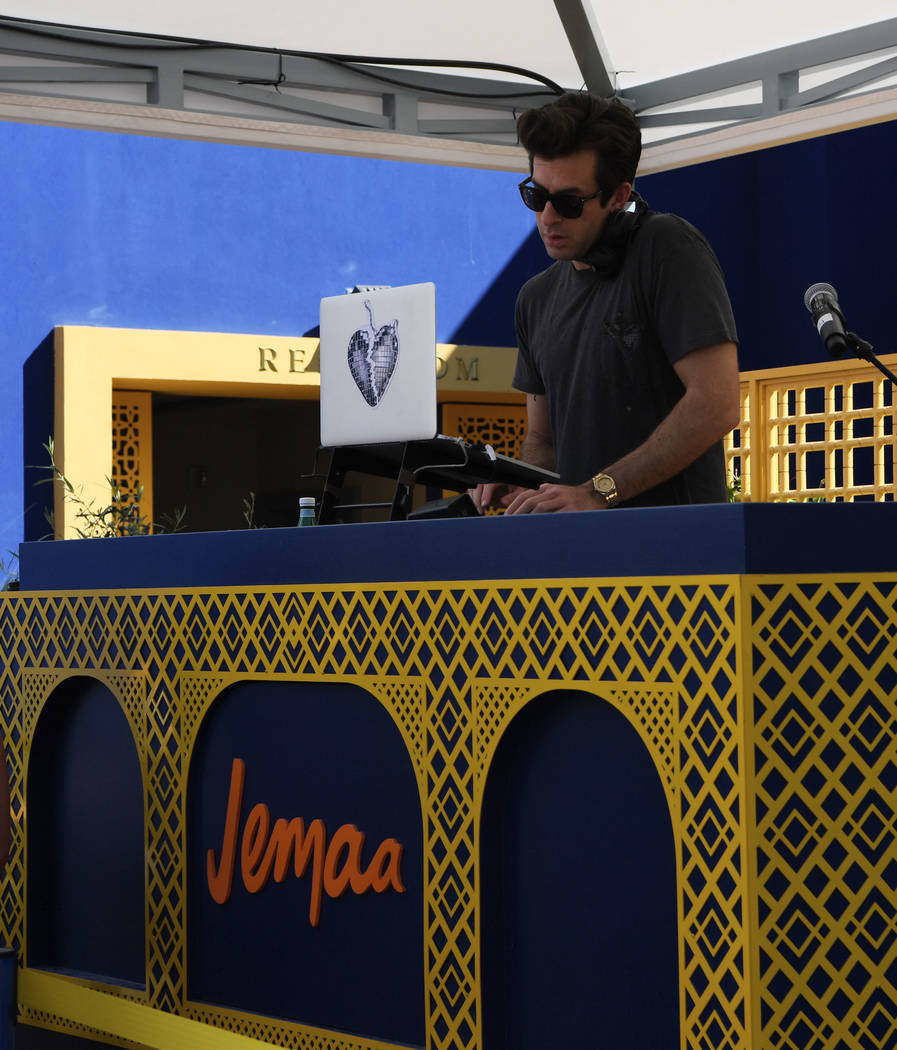 And lurking behind his magical laptop, hit king Mark Ronson held court and played the buoyant sound bed for those lounging on the day beds.

This was the scene Saturday at the opening of Jemaa — The NoMad Pool Party on the Strip.

The obvious comparison is to Kaos nightclub and dayclub, which just opened at the Palms. The NoMad scene is far less Kaos. Or, chaos. The entertainment lineup is is top-notch and the food — prepared by Will Guidara and Daniel Humm of NoMad Restaurant at the connected Park MGM — is exceptional for a pool party. NoMad Bar Director and Managing Partner of Food and Beverage Leo Robitschek designs the garish, garnished cocktails.

Ronson brings artistic integrity to the pool deck, for his past collaborations with Amy Winehouse, Bruno Mars (on “Uptown Funk,” our party scene’s unofficial national anthem), Lady Gaga (the Academy Award-winning “Shallow” from “A Star Is Born”), and Miley Cyrus (“Nothing Breaks Like a Heart”).

Amazing, too, was that Ronson’s performance was so informal for an artist of his stature. I recalled being nearly blown away — physically — by Marshmello’s set at Kaos dayclub. But Ronson turned up in his shades, a T-shirt torn in all the right places, and made the place swing for a full afternoon. He’ll be back this summer, alternating with leading DJ draws Questlove, Green Velvet and Kaytranada

Given that this was a club opening, six-time Sports Illustrated Swimsuit Issue model Nina Agdal strode around the scene with her boyfriend, actor Jack Brinkley-Cook. Also around the pool: British vocalist Leona Lewis; actor/singer Chord Overstreet; and actor/model Tanner Novlan, with his wife, actress Kayla Ewell (of “Vampire Diaries” alum).

NoMad and Park MGM have shown they won’t be left behind in the ongoing entertainment evolution on and off the Strip. The weekly pool party and concert is further proof. Soon, they will be renting out Donny, the floating peacock.

The Vegas entertainment triumvirate of Mike Hammer, Xavier Mortimer and Melody Sweets are cast in a scripted show in development centering on the overhaul of the Fremont Street Experience’s VivaVision video canopy. If you see them hanging out amid the Fremont Street buskers, you’ll know why.

FSE President Patrick Hughes confirmed his operation is indeed funding the show, “Paying for the entire operation,” as he says, and has partnered with New York-based production company MouseRoar to create the project.

Hammer (Canyon Club at Four Queens) and Mortimer (Windows Showroom at Bally’s) are Vegas headlining magicians. Sweets is the original Green Fairy in “Absinthe” who has signed a development deal with Adam Steck’s SPI Entertainment and has been reviewing venues on the Strip for several weeks.

Hammer, especially, has pursued an acting career, taking small roles in L.A. before moving to Las Vegas in 2010. He once played Barry Weiss’s sidekick in an episode of “Barry’d Treasure,” the A&E spin-off of “Storage Wars.”

The inspiration of this effort, the FSE VivaVision display, is long overdue for an upgrade. More than $32 million (much of it from SlotZilla thrill ride profits) is being spent to upgrade the system, which was last updated in 2004. The new light show is scheduled to open New Year’s Eve 2019.

Marie Osmond was forced to miss a show Wednesday, bowing out because of allergies. She was back in fine form Saturday, and so was Donny, and so was Suzanne Somers.

Somers? Yep. She and her husband and manager, Alan Hamel, were at the show. Somers is known to be seeking a stage partner to pitch for a possible Vegas show, and Marie is a free agent after she and Donny close their run in November. Connect those dots.

Entertainment legend Paul Anka was honored with the BMI (Broadcast Music Inc.) Board of Directors Award at the BMI/NAB dinner on Tuesday. Anka sang his first hit, “Diana,” to roaring response, as he accepted the career-achievement honor. He’s planning a return to Las Vegas in November, at Reynolds Hall at The Smith Center, the date not announced.

Anka headlined Encore Theater for three dates last May, and played The Smith Center on Nov. 17, 2017. He’s also featured in a funny anecdote in the Bronx Wanderers show at Mat Franco Theater at The Linq Hotel. Turns out, young’ns don’t know of Mr. Anka.

The Plaza is on a … collision course with another demolition-derby event this November. The Stirrin’ Dirt Casino Battle Royale, a boffo success last month at Core Arena, is all but signed for a sequel. Hotel CEO Jonathan Jossel is eager for a return, and so are the 2,000 or so fans who filled the arena each night.

Expect a hotel room/event package for the next event, which really … crushed it.

‘Bruce’ on the loose

“Bruce,” the latest Broadway-inspired musical effort from Richard Oberacker and Rob Taylor, will perform its first reading in New York on June 13. No venue set yet. The musical follows the development of the shark from “Jaws,” which was named Bruce, as a hook to tell the story of Steven Spielberg’s breakthrough 1975 thriller.

From polar ends of the entertainment universe: Fred Schneider of the B-52’s was hanging with a friend at Rush Lounge at Golden Nugget on Saturday night. Singer Sina Foley posted a pic of the two together; evidently Schneider was just visiting town. The band was not booked here.

Also, reaching way back, Cissy King of the famed Bobby & Cissy dance team on the “The Lawrence Welk Show,” was at the Italian American Club on Thursday for Lance Burton’s appearance at the monthly FIORE luncheon. I know she was there because she sat next to me, as a guest of magic great Fielding West.