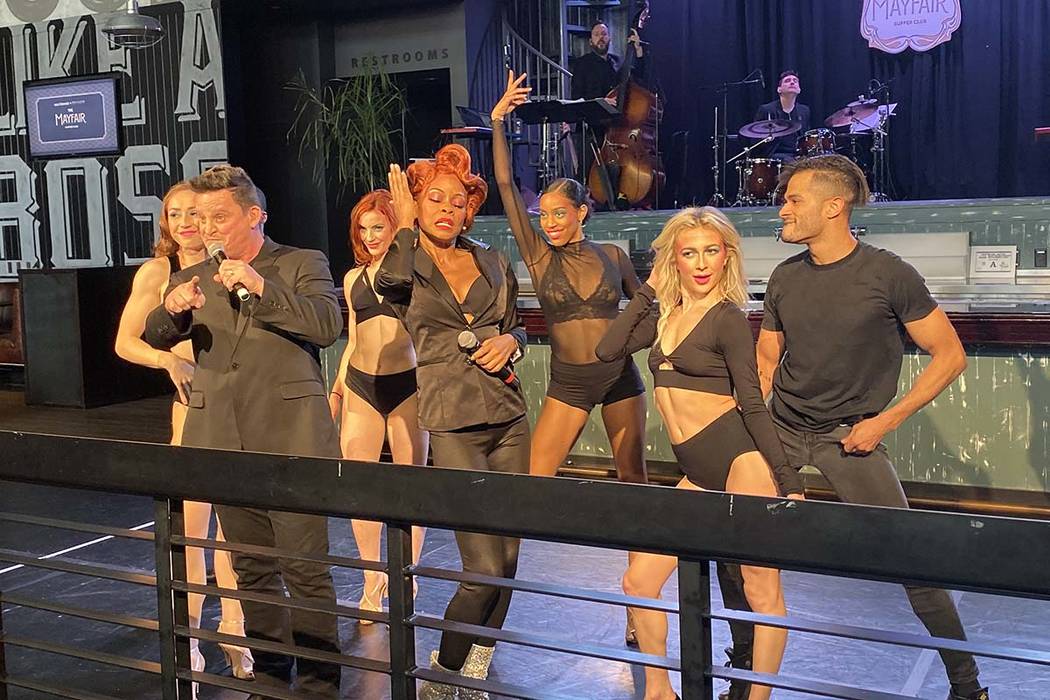 The cast of Mayfair Supper Club is shown during a media sneak preview at Park MGM on Thursday, Dec. 12, 2019. The club opens at Bellagio on New Year's Eve. (John Katsilometes/Las Vegas Review-Journal) @JohnnyKats 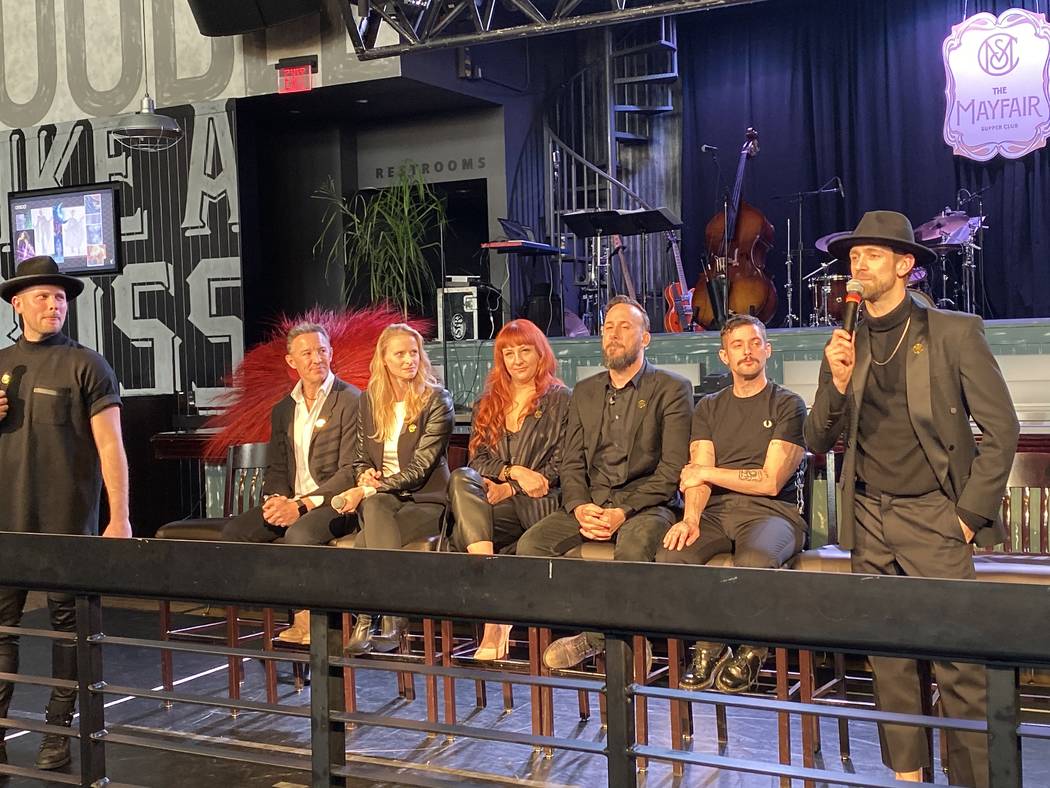 Concepts come and go on the shores of Lake Bellagio, but the famous fountains live forever.

The creators of Mayfair Supper Club know this and are planning a side of water (show) with your dining and entertainment experience.

“The plan is to incorporate the Bellagio fountains into our show,” said Kim Willecke of No Ceilings Entertainment, the production company behind the dining/entertainment/cool hang enclave. Willecke made that revelation during a media sneak preview of the restaurant experience at a rehearsal space tucked behind Mama Rabbit at Park MGM. He then cued up “Hey Big Spender.”

“Judy (a character portrayed by singer LaShonda Reese) will stand in front of the balcony, and the Bellagio Fountains are going to shoot off in the background, so while we’re playing inside, it’s also going to be playing outside,” Willecke said. “Our choreography is going to be perfectly aligned with the choreography of the fountains.”

For No Ceilings founders Willecke, Dennis Jauch and Phil Shaw, incorporating the fountains into a choreographed, live music event is “a dream come true,” as Willecke said. Even so, the splashy scenes, which run throughout the evening, are just a segment of the Mayfair dining and entertainment evening.

“We don’t want to talk about it too much because it’s kind of a thing that happens on the side, right?” Willecke said. “We’re not saying, ‘Guys, look, we’re in front of the fountains.’”

Jauch, donning the same stylish fedora as his creative partner, cut in with, “We did kind of make a mistake, because we did just tell them about it.”

It’s not easy to keep those fountain shows a secret, gents.

Clearly operating as co-visionaries, Willecke and Jauch met while competing as teenagers on the German version of “So You Think You Can Dance.” Willecke met Shaw years later at a party in New York, a cocktail conversation blossoming into the No Ceilings Entertainment Company. The Mayfair Supper Club — inspired in part by London’s fashion district — is the trio’s first Vegas project.

For a hint as to their artistic underpinnings, Willecke said, “I am very inspired by Bob Fosse, and his style was just so new and innovative and weird, actually. Out of his grunt work, Michael Jackson arose, who was almost like a one-on-one copy of what Bob Fosse started. He took something like ‘Cabaret,’ which was set in the 1920s in Berlin, and made it modern. It’s a big inspiration for the Mayfair Supper Club.”

Mayfair opens New Year’s Eve. After that special-seating night, the club will be open 5 p.m.-midnight Sundays through Thursdays (last dinner reservation at 10:30 p.m.); and 5 p.m.-3 am. Fridays and Saturdays (last dinner reservation at 1:30 a.m.). A Mayfair After Dark presentation runs 11 p.m.-3 a.m. Fridays and Saturdays, with a DJ heading up a dance party and a late-night menu available. And there shall be jazz on the water with Jazz Sundays running 5 p.m.-midnight.

Mayfair is moving into a space with some considerable Las Vegas lineage. The club was originally known as Fontana Bar (or, alternately, Fontana Lounge and Fontana Room) from Bellagio’s opening until it shifted to Hyde in December 2011. Fontana was an elegant live-music venue as Vegas favorites Dian Diaz and Jimmy Hopper played the room for years. Hyde was a chic, upscale nightclub.

An early look at @themayfairlv in a sneak @parkmgm … an evening played out in three acts.

The waterside views were boon to both venues and that will doubtless be the case for Mayfair. But that is just the start.

The club will offer extensively designed numbers created by music director and multi-instrumentalist J.F. Thibeault (of “Zumanity” and “Viva Elvis” in Las Vegas) and choreographer Dana Foglia (who has worked extensively with Beyonce (most recently on her “I Am …” tour). Cirque du Soleil creative vets Nicky and Laetitia Dewhurst, who have twice headed up “One Night For One Drop,” have written the show’s script, and know that there is deft dialogue in Mayfair’s nightlong presentation.

Along with Reese, out of New York, and Steve Judkins of L.A. (both of whom performed at Thursday’s preview), the singing lineup features Lisa Marie Smith (“Pin Up” at the Strat and “Baz” at Palazzo Theater) and Jason Martinez (an original member of the “Jersey Boys” in Las Vegas). Thursday’s teaser performance featured the two singers, Thibeault’s trio and a quartet of backing dancers.

But the message from the creators is the dinner menu, vintage vibe and inventive design — though we have not actually witnessed the club’s Big Reveal — will carry Mayfair Supper Club, even as performers rotate. It’s an idea shared by such nightspots as Rose. Rabbit. Lie. at The Cosmopolitan, which stages wonderful entertainers who are presented not by name, but through the overarching entertainment and dining experience.

A Vegas newbie, Willecke says he has been impressed, even surprised at the city’s reception to his idea and the Mayfair development.

“It is such a close community of entertainers,” Willecke said. “They are so inviting to us. It’s nice to go to a show and talk to the performers after and feel how accommodating they are to us. Also, the level of talent — I didn’t think it was going to be this high. We cast in New York, L.A., but here, people were so hungry to get into this project. We have loved this process.”