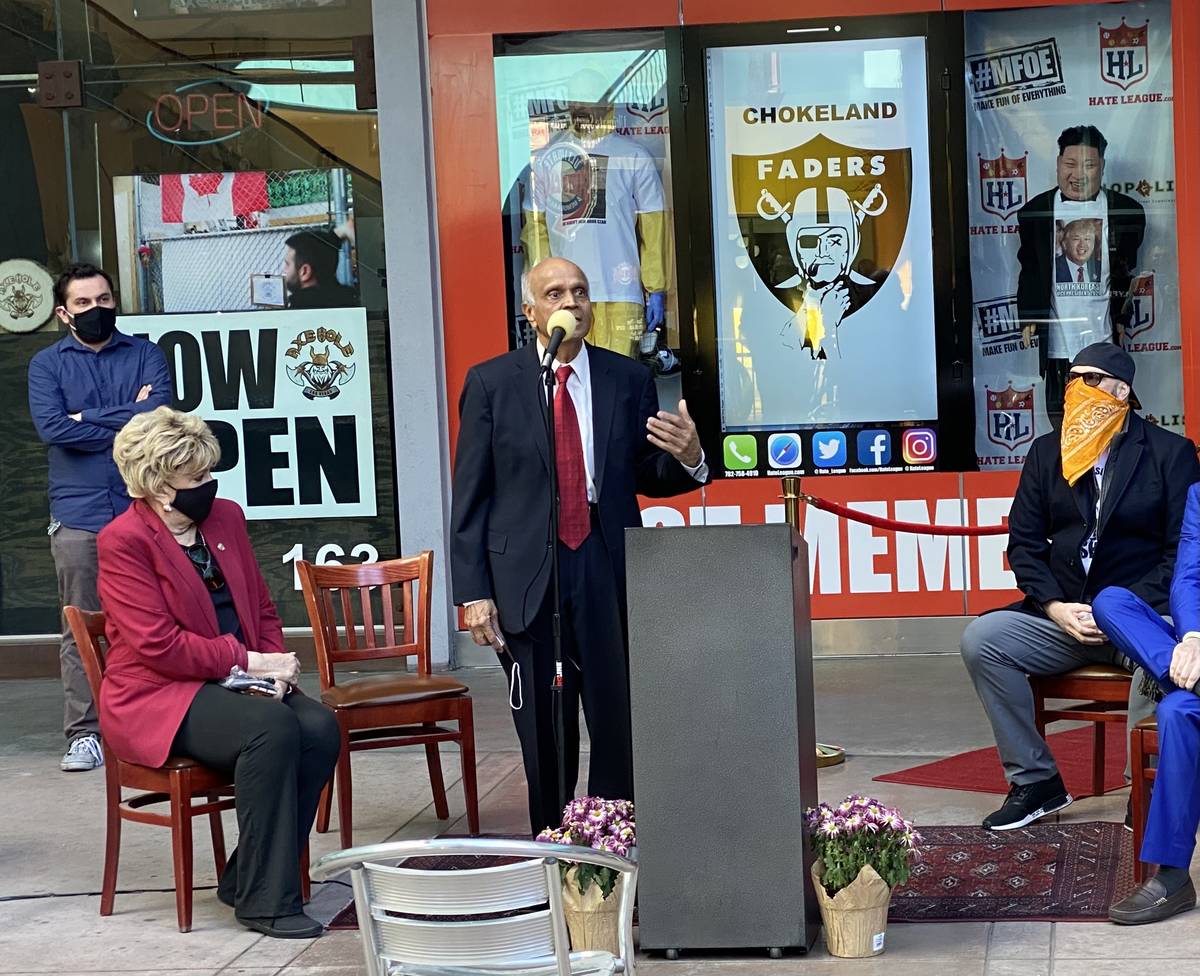 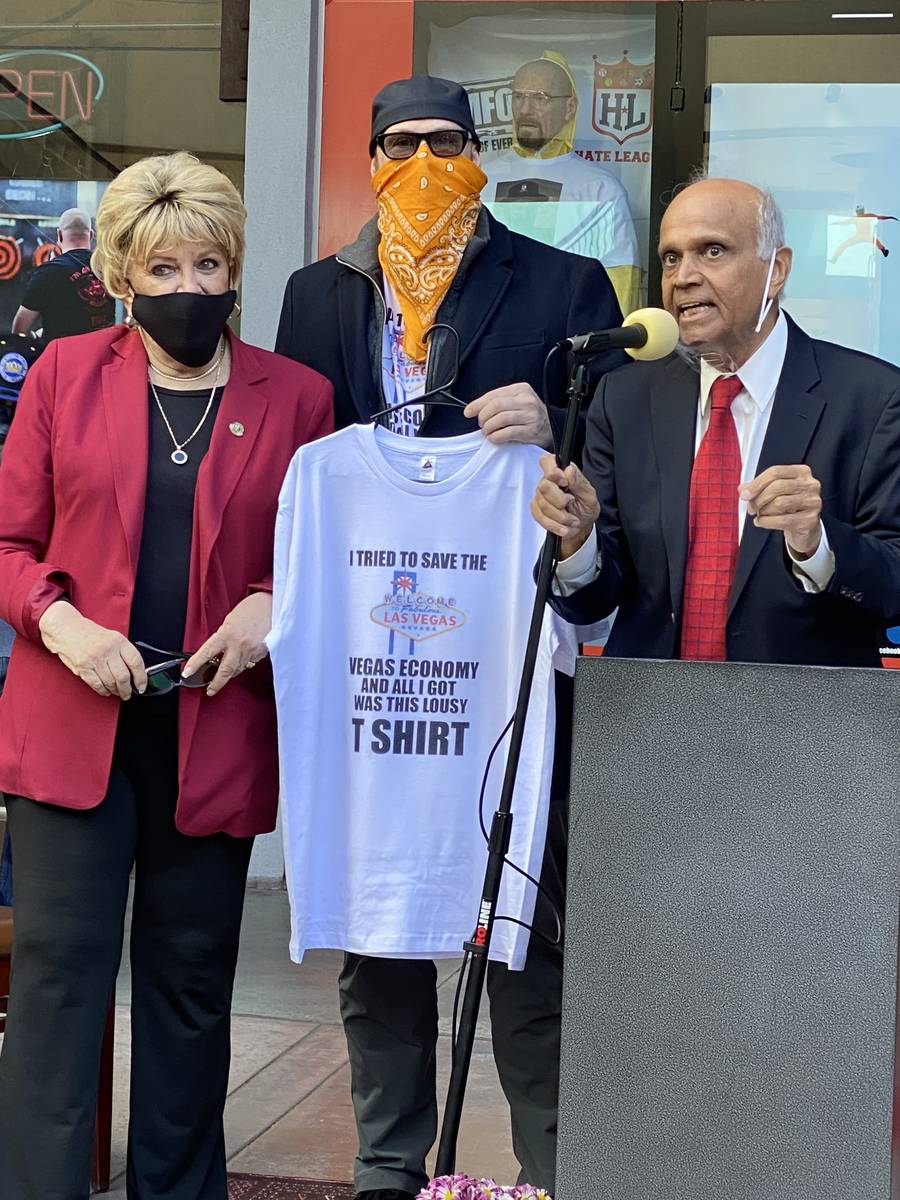 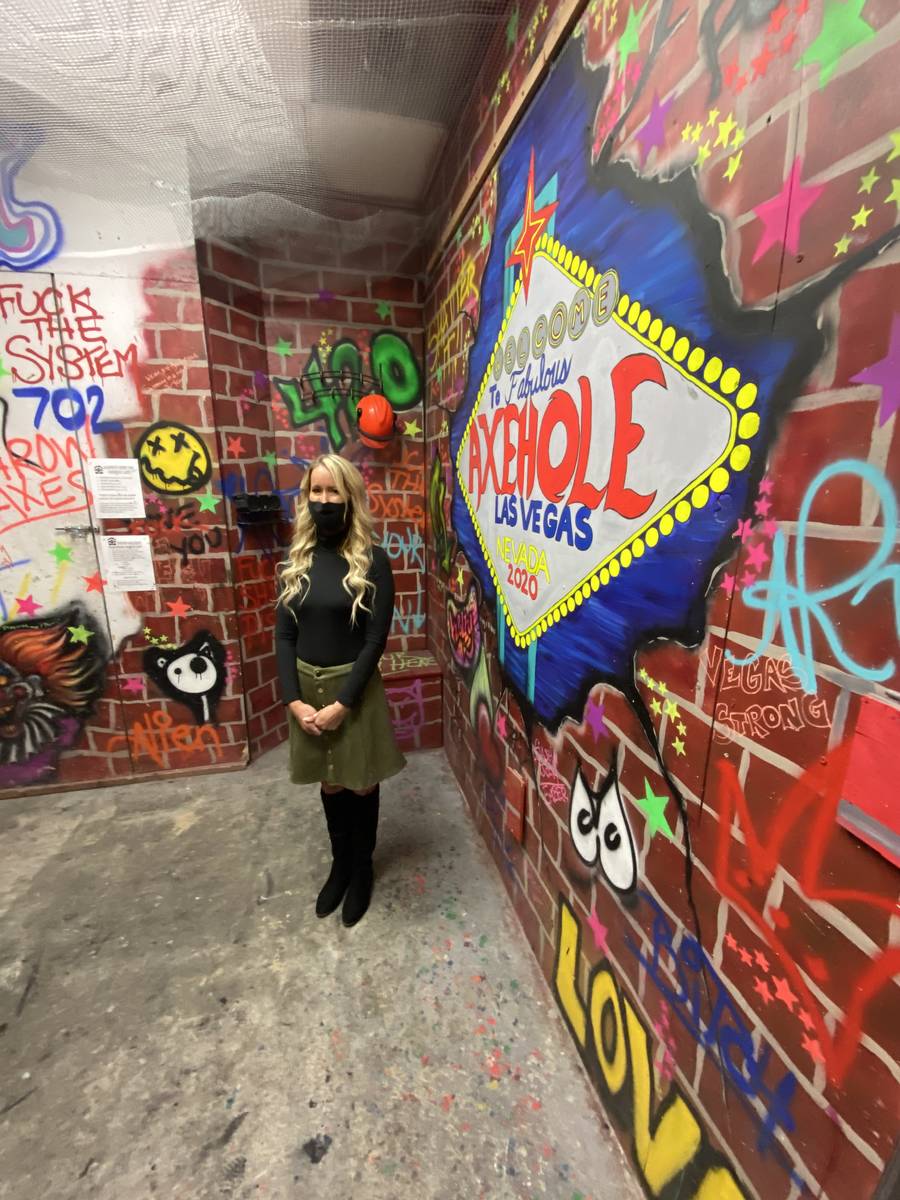 Axehole owner London Cochrane is shown in the "Smash Room" in her business at Neonopolis on Thursday, Jan. 21, 2021. (John Katsilometes/Las Vegas Review-Journal) @JohnnyKats

Neon dreams, in the form of novelty T-shirts with silly messages, are sprouting in downtown Las Vegas.

Hate League at Neonopolis will be open in about 10 days, owner and founder Tim Tempas said after Friday morning’s ribbon-cutting ceremony hosted by Neonopolis owner Rohit Joshi. Hate League is the rare business that has used three names before even opening.

First it was Haterade, a play on Gatorade. Thursday, it was announced the name had switched to Hate League, but for Friday it was Make Fun of Everything. That third name was to satisfy Las Vegas Mayor Carolyn Goodman’s wishes not to cut a ribbon at a business with “Hate” in the title. Bad messaging, given the times. So, no hate on Friday, but Hate League from here forward.

Tempas said patrons won’t see many of the T-shirts with messages now on display when the business formally opens. The Los Angeles Fakers logo, worn by the Walter White “Breaking Bad” mannequin earlier this week, is one prominent example. There are some trademark concerns, and also the designs are not complete.

“There are some things displayed we’re not proud of, to be honest,” Tempas said. “We want to make sure we are done with the designs and copyright-compliant before moving forward.”

The owner gave Goodman a T-shirt that read, “I Tried To Save The Vegas Economy, And All I Got Was This Lousy T-Shirt.” Goodman left the keepsake behind. Look for it at Hate League.

Keeping a low profile at the back of the crowd, Dick’s Last Resort owner Harry Mohney attended the ceremony, as did Axehole owner London Cochrane. Axehole is clearing a healthy profit, even during COVID, in its 2,200-square-foot space.

Goodman visited the “Smash Room” for the first time. This is where visitors gear up in safety equipment and smash stuff (one medium item and five smaller items, in 15 minutes). Goodman did none of that Thursday. But I think she’ll be back.

Next door, Mohney still is hoping he can open Dick’s Last Resort this spring. The restaurant and tavern is moving into the Cannabition Cannabis Museum space. Mohney is keeping one of the museum’s signature props, a giant tree installation, as a kind of playground for kids.

It’s worth a shot, and easier than lugging the woodsy effect from the building. Regardless, Dick’s should put 50-60 folks to work, likely in matching T-shirts.

Rivera said the two talked about “bad audiences.” They agreed there is such a thing as a bad audience for comedy, but also these crowds can be turned around by a seasoned comic.

“I can guarantee, you could be in the worst room ever, and if Dave Chappelle walks in, I highly doubt he’s going to have a bad set,” Rivera said. “Even though I have seen Bill Burr bomb before … I’m not talking (smack) about Bill Burr, but facts are facts. I have seen Bill Burr bomb before … it was Latino Night at the Laugh Factory, and they just weren’t really feeling him.” The whole stretch is a great, under-the-carriage look at stand-up comedy, and could probably win over any crowd.