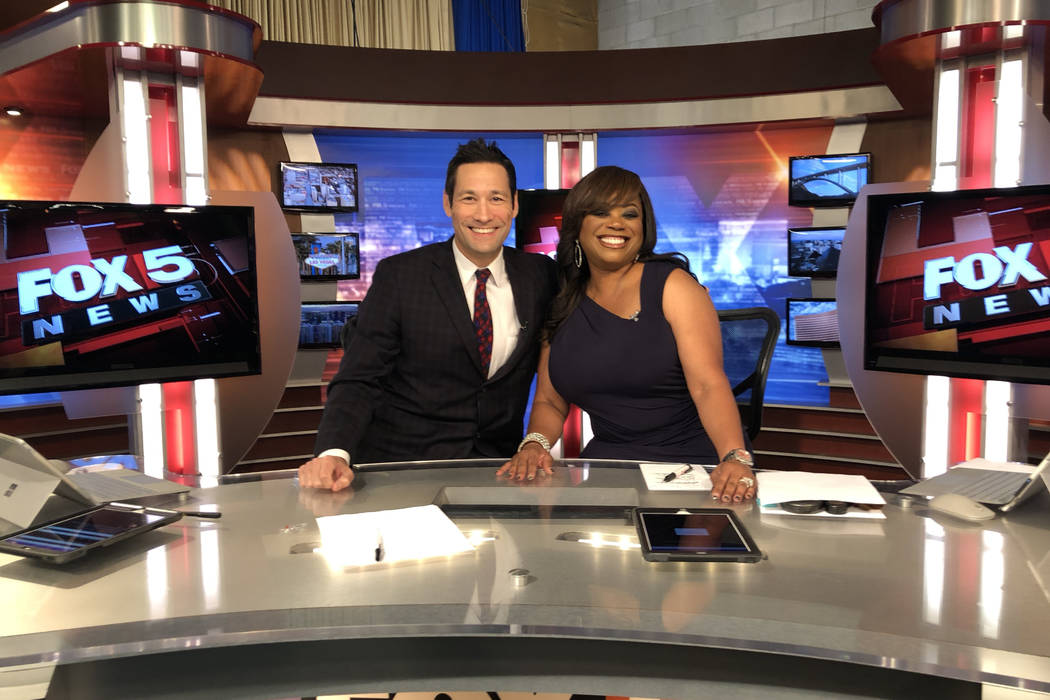 Jason Feinberg and Monica Jackson are shown on the Fox 5 news set on Jackson's final day with the station, Aug. 31, 2018. (Jason Feinberg)

The woman known as MOJ is bringing her show to Channel 8.

Longtime Fox 5 anchor and personality Monica Jackson returns to network TV with “The Monica Jackson Show,” premiering in December on KLAS-TV. The show will air 1 a.m. Saturdays (late Friday night) as a 30-minute, talk-entertainment-reality show focused on Las Vegas performers and some of Jackson’s experiences in the city.

The show will originate from DragonRidge Country Club in Henderson and is self-produced by MOJ Productions, the company founded by Jackson and her manager/husband, Delano Jackson.

Jackson says her company is leasing the time slot on KLAS, and she and Delano have control over the operation. The Vegas TV veteran is confident she can find an audience — and vice versa — in that late-night weekend slot.

“Las Vegas is a 24/7 city, and having been on TV so long, I know it’s a city that watches TV around the clock,” Jackson said during a phone chat Thursday. “We are still working on a lot of specifics, but we will focus on Las Vegas and our ultimate goal is to be on the Strip.”

Jackson is to be featured as a regular guest on the station’s “Las Vegas Now” lifestyle show, which airs at 3 p.m. weekdays. She’ll use that platform to promote guests and segments on “The Monica Jackson Show.”

Delano Jackson issued the news release Thursday morning, absent comment from KLAS execs. Station general manager Lisa Howfield has yet to return a phone message for comment, though Monica Jackson said, “Lisa believes in what we are doing and has invited us into her home, which is KLAS.”

Jackson left KVVU-TV in August 2018 as her contract with the Las Vegas Fox affiliate expired. She spent 14 years at the station. She had aired a version of her show online after she left the station,

Jackson’s show is to run through 2020, and she will continue her “MOJ Show” podcast.

“Ever since August of last year, Delano and I have been working our butts off,” Jackson said. “It’s been his vision, and mine, to elevate me to the national level.”