More than 500 Siegfried & Roy items up for auction 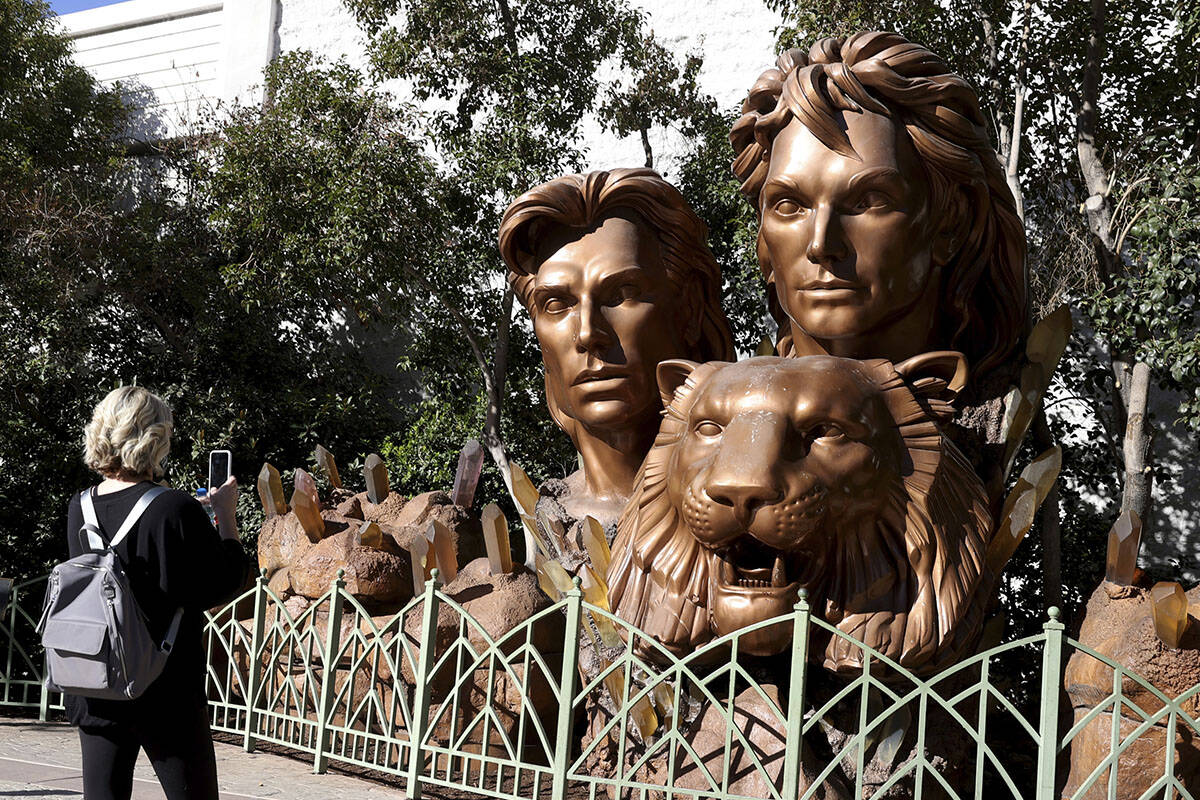 Bree Medin of Andover, Minn., takes a photo of a statue of Siegfried & Roy on the Strip in front of The Mirage in Las Vegas, Thursday, Jan. 14, 2021. Fischbacher, namesake partner in the iconic entertainment duo Siegfried & Roy, has died in Las Vegas at age 81. Fischbacher died Wednesday, Jan. 13, at his home from pancreatic cancer, said publicist Dave Kirvin of Kirvin Doak Communications. (K.M. Cannon/Las Vegas Review-Journal via AP)

Siegfried and Roy’s collection of personal property is onsale June 8-9, through Bonhams auction house in L.A.

More than 500 items from the duo’s two Las Vegas estates at Little Bavaria and the Jungle Palace are being made available for sale to the public, with specifics at bonhams.com.

From the company’s news release, the collection is “filled with treasures and mementos of their storied lives and travels around the world. The duo amassed a collection of jewelry, furniture, and decorative objects — ranging from Victorian English clocks to Japanese bronzes. Cartier necklaces, Breitling wristwatches, and other custom jewelry adorned with tigers or lions are also featured, along with one-of-a-kind artwork and collectables.”

S&R estate spokesman Dave Kirvin said, ” Siegfried and Roy lived every day of their lives immersed in spectacle and opulence, both on stage and off. This was reflected in their homes and mementos including furniture, art and collectibles exhibiting their style, charm and eclectic interests … Siegfried and Roy designated all sales proceeds should benefit their charitable wishes through their SARMOTI Foundation.” Kirvin also said the duo had chosen Bonhams because of the company’s “expertise in representing celebrities and unique collections.”

Roy Horn died May 8, 2020, in Las Vegas because of complications due to COVID. He was 75. Siegfried Fischbacher died on Jan. 14, 2021, due to pancreatic cancer at age 81. The duo’s real estate at the two locations is not part of the sale. All proceeds are going to the SARMOTI Foundation, Siegfried & Roy’s personal charity.

Items offered for sale include:

— Electric blue satin stage costumes worn on stage by Siegfried & Roy, c. 1980s. Embellished with blue bugle beads to the collar and lapels and embroidered all over in a foliate pattern with silver sequins, rhinestones and faux pearls, the tailcoat was worn by Siegfried and the cropped jacket by Roy. Estimate: $2,000-$3,000.

Helen Hall, Director of Pop Culture at Bonhams said in a news release: “We are thrilled to offer the astounding and magical collection of Siegfried & Roy at Bonhams in Los Angeles. Siegfried & Roy dreamed a life for themselves and then made it a reality, whether on stages around the world or in their homes in Las Vegas. This is a unique opportunity to acquire a little bit of magic from the life of these incredible entertainers and humanitarians.”

Siegfried and Roy met on a cruise ship in 1957 and began performing soon after at nightclubs and theaters throughout Europe. They also appeared at “Folies Bergere” in Paris in their early years.

In 1967, they moved to Las Vegas to take a specialty act in “Folies Bergere” at the Tropicana. They also performed two stints as a side act in “Lido de Paris” at the Stardust and also were featured in “Hallelujah Hollywood” at the original MGM Grand (now Bally’s).

S&R headlined in “Beyond Belief” at the Frontier for seven years before Steve Wynn hired the duo in 1988 to perform at The Mirage. They performed 5,750 consecutive sold-out shows from 1990 until Oct. 3, 2003, when Horn was dragged offstage by the giant white tiger Mantecore (then known as Montecore).

The duo worked through Horn’s recovery from the incident and also made frequent public appearances in Las Vegas. In August 2020, The Mirage dedicated Siegfried & Roy Drive to the duo, the street leading to the hotel’s main entrance. It was Fischbacher’s last public appearance.