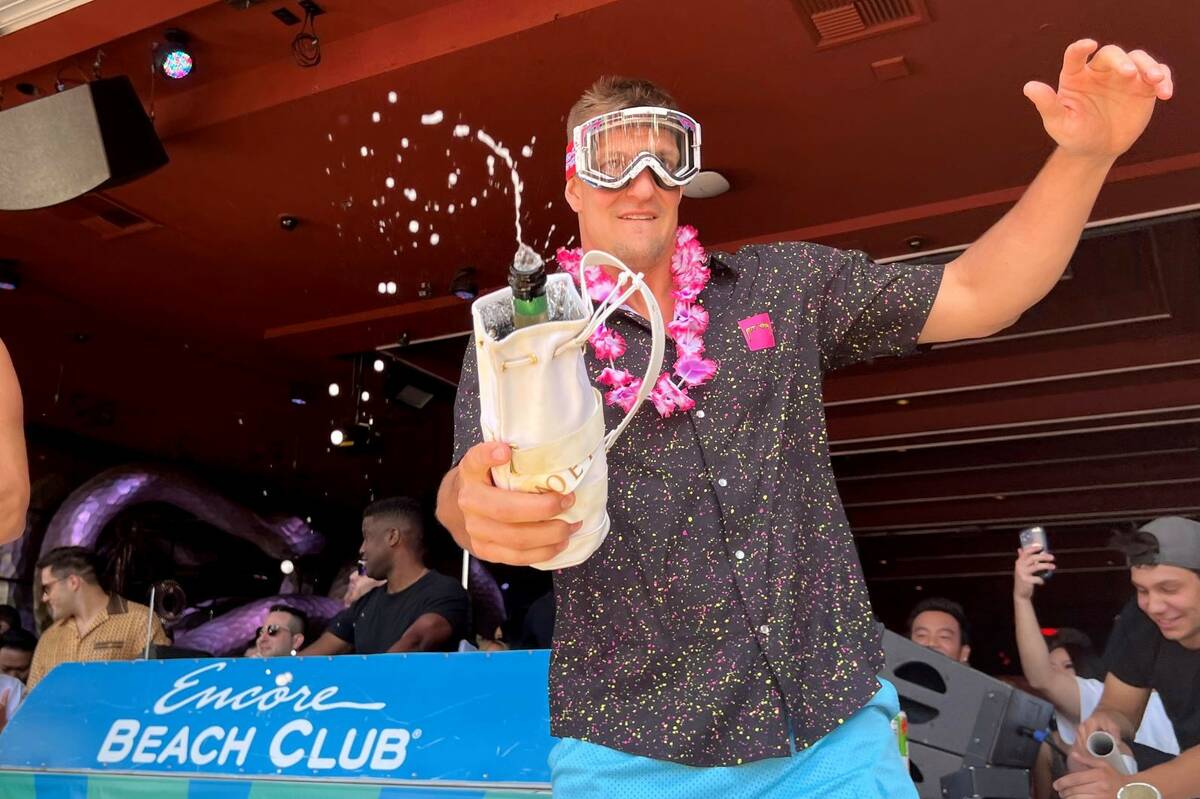 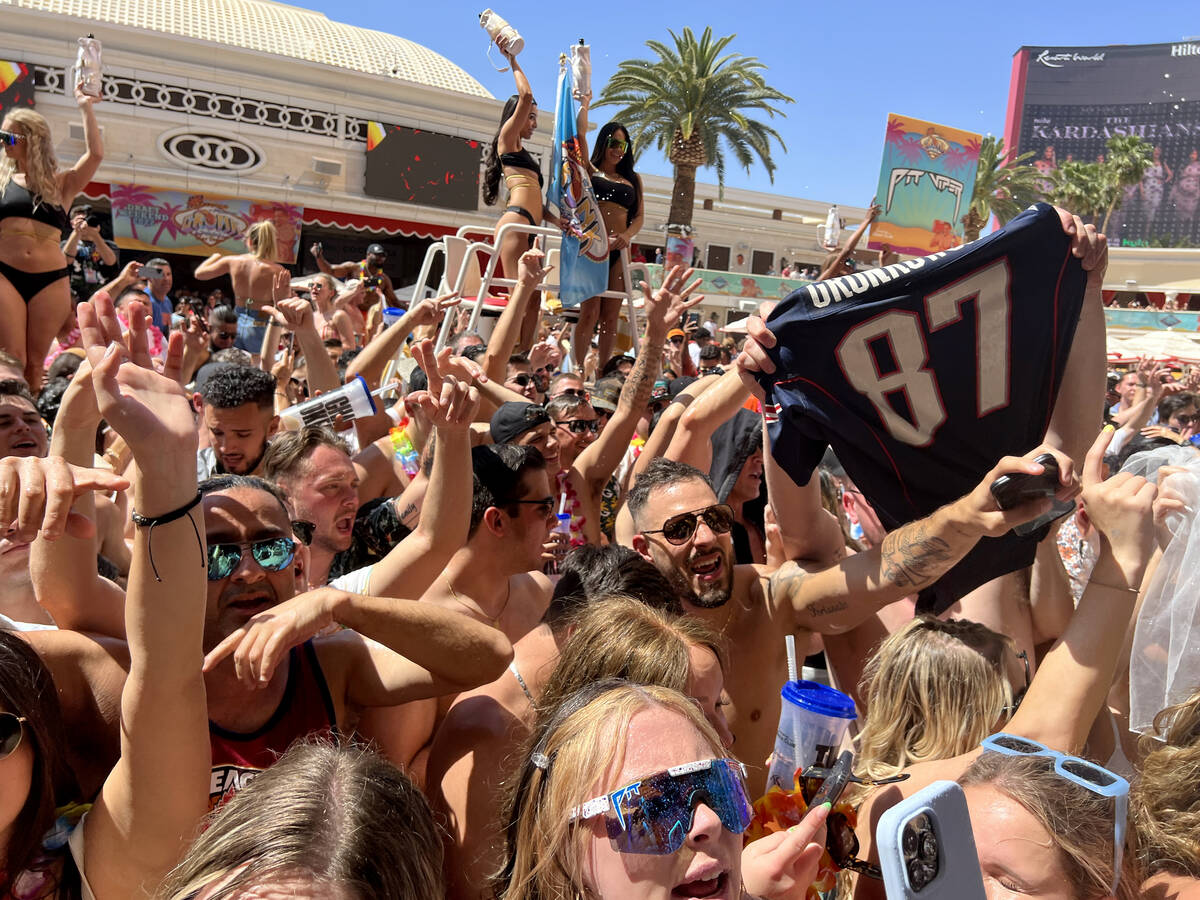 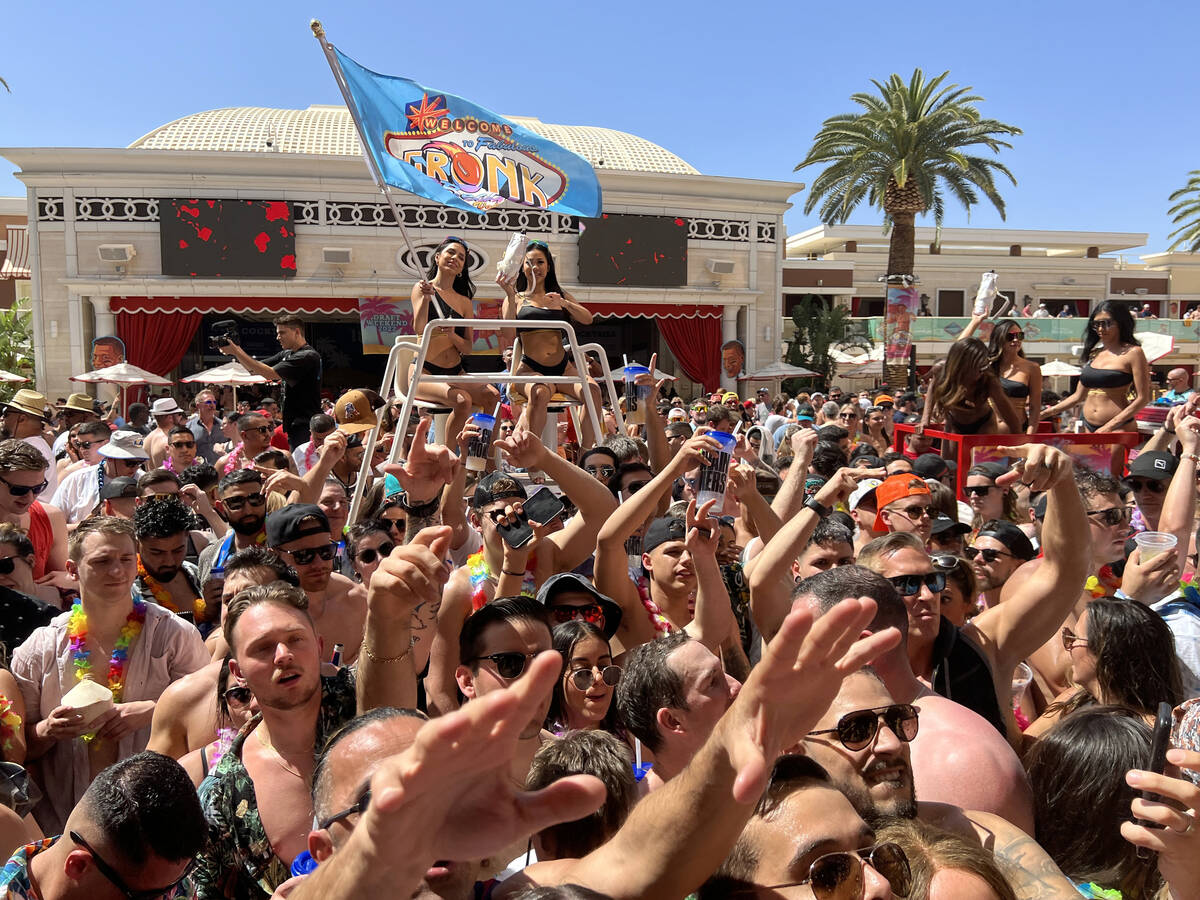 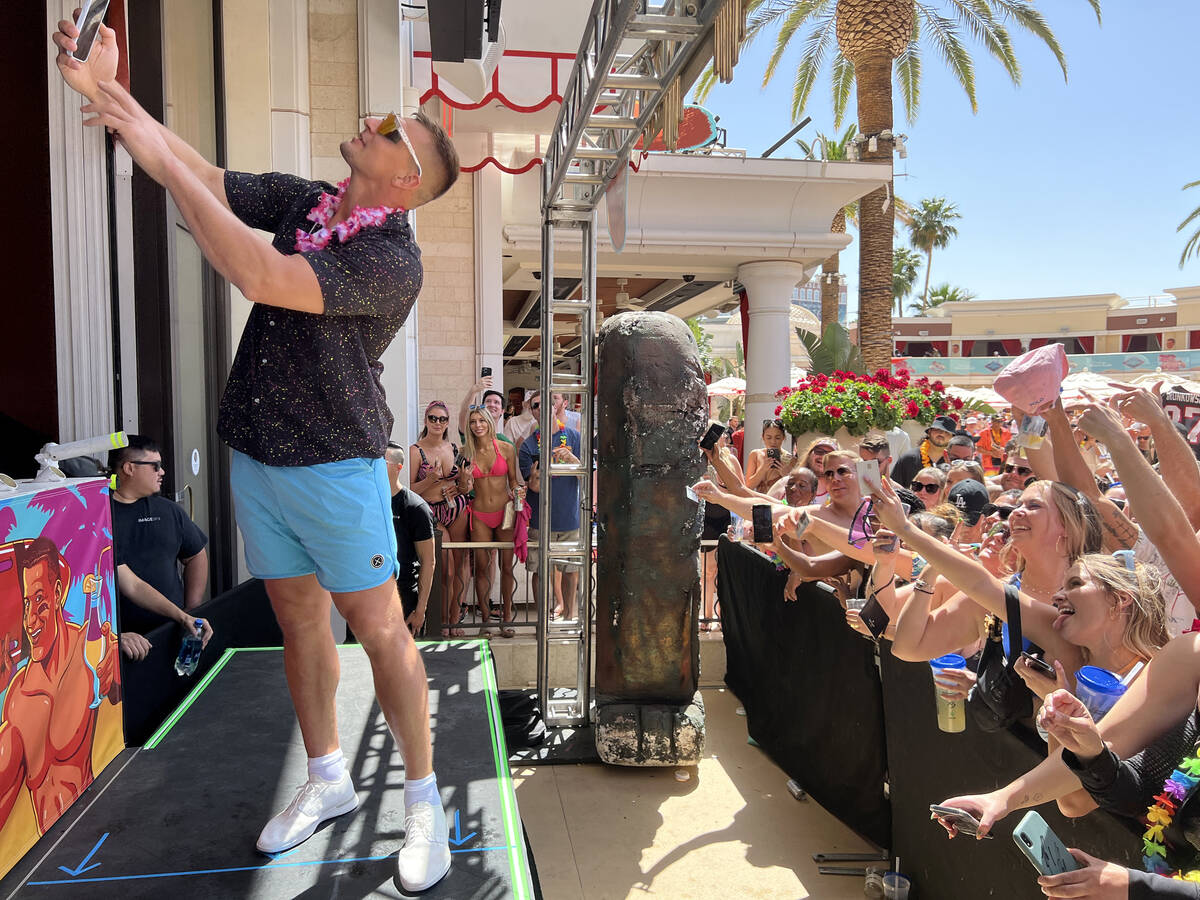 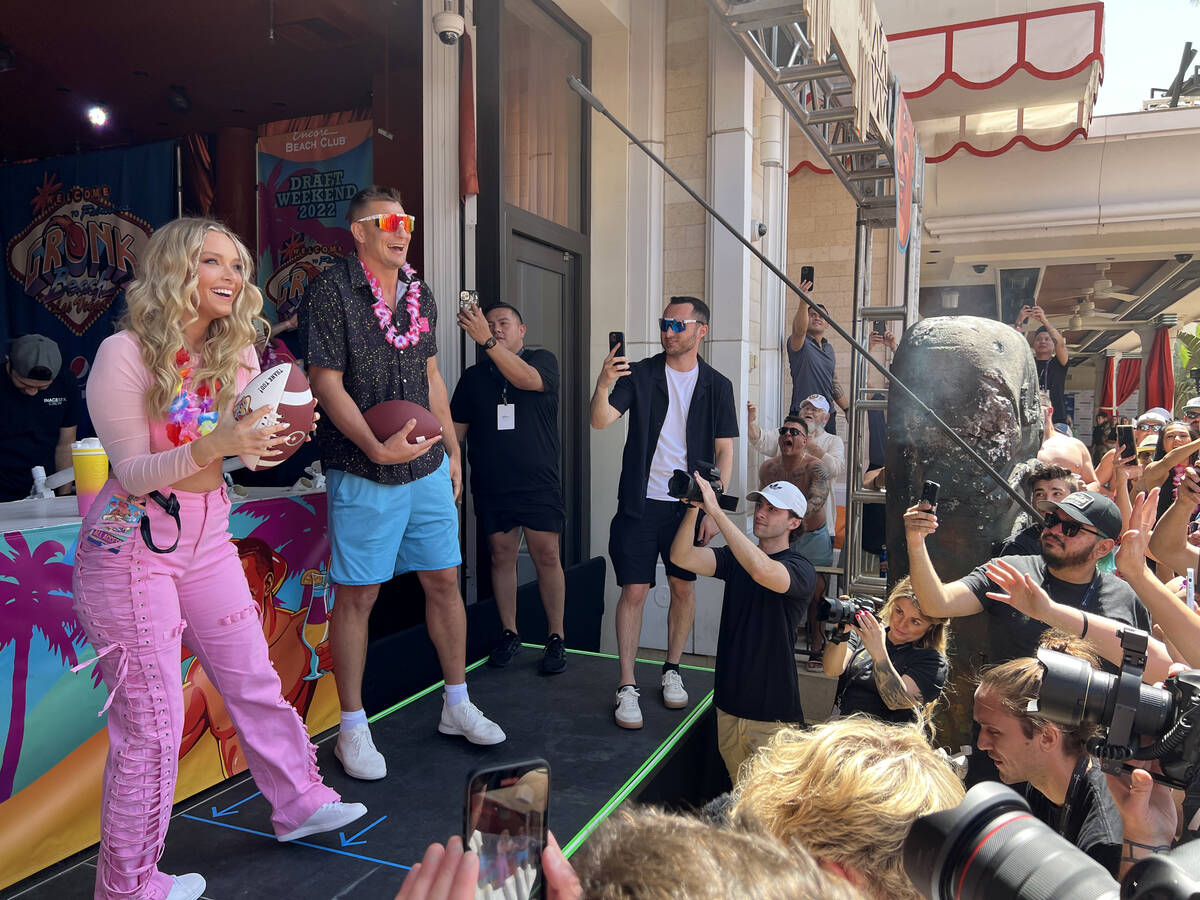 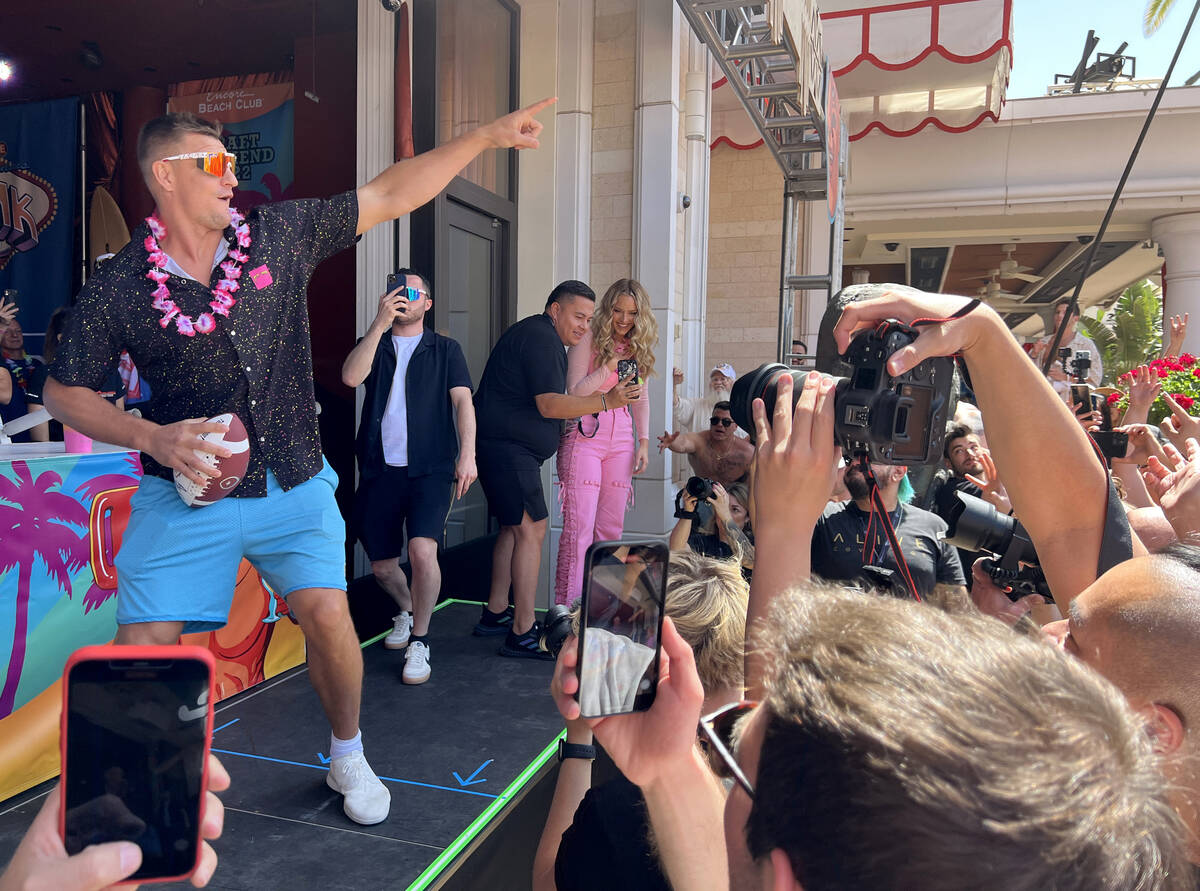 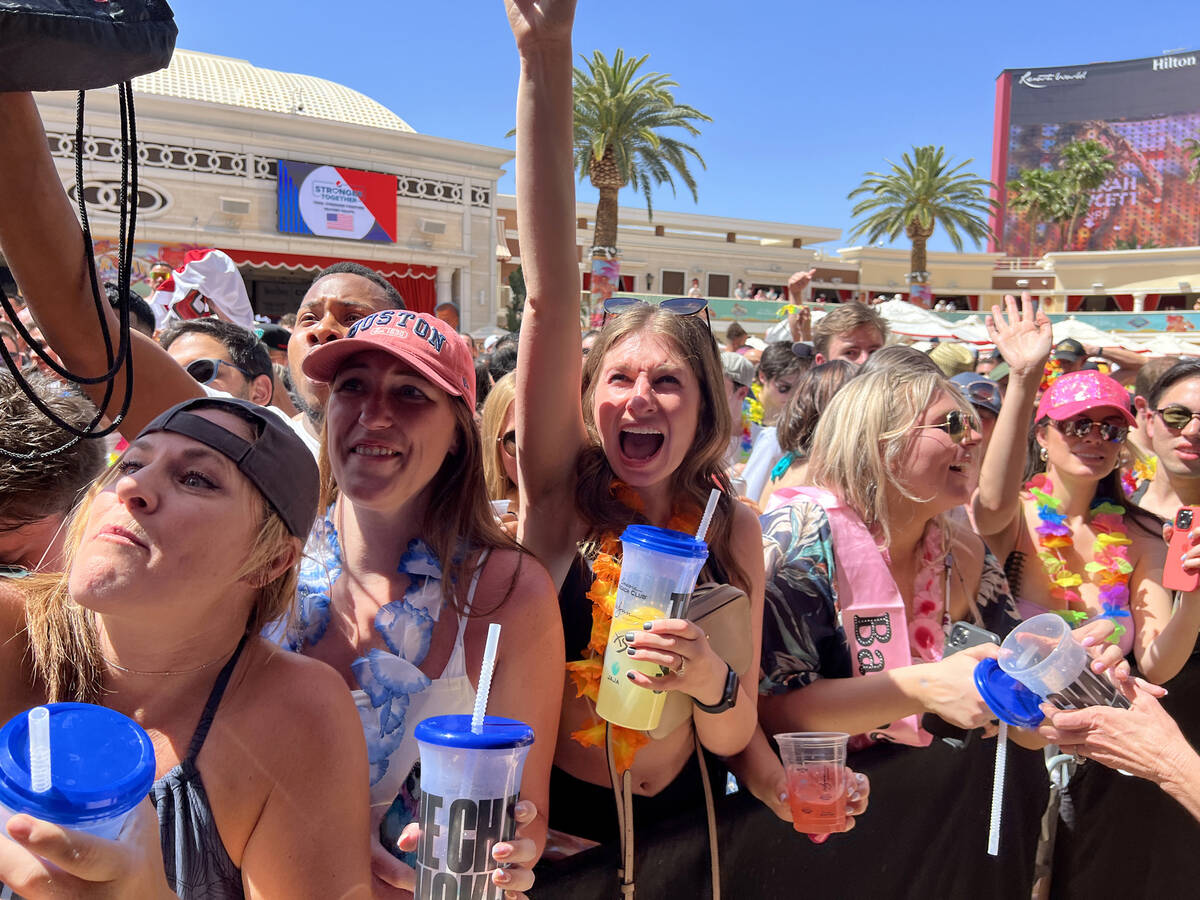 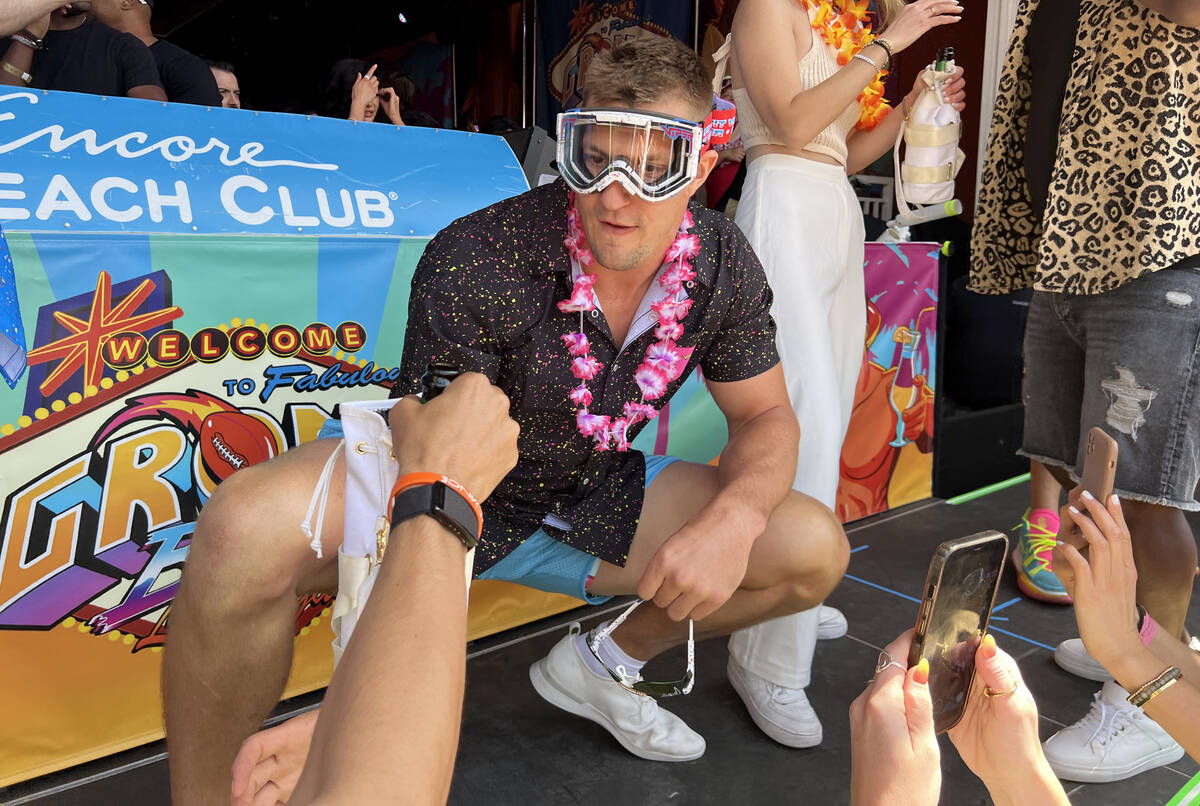 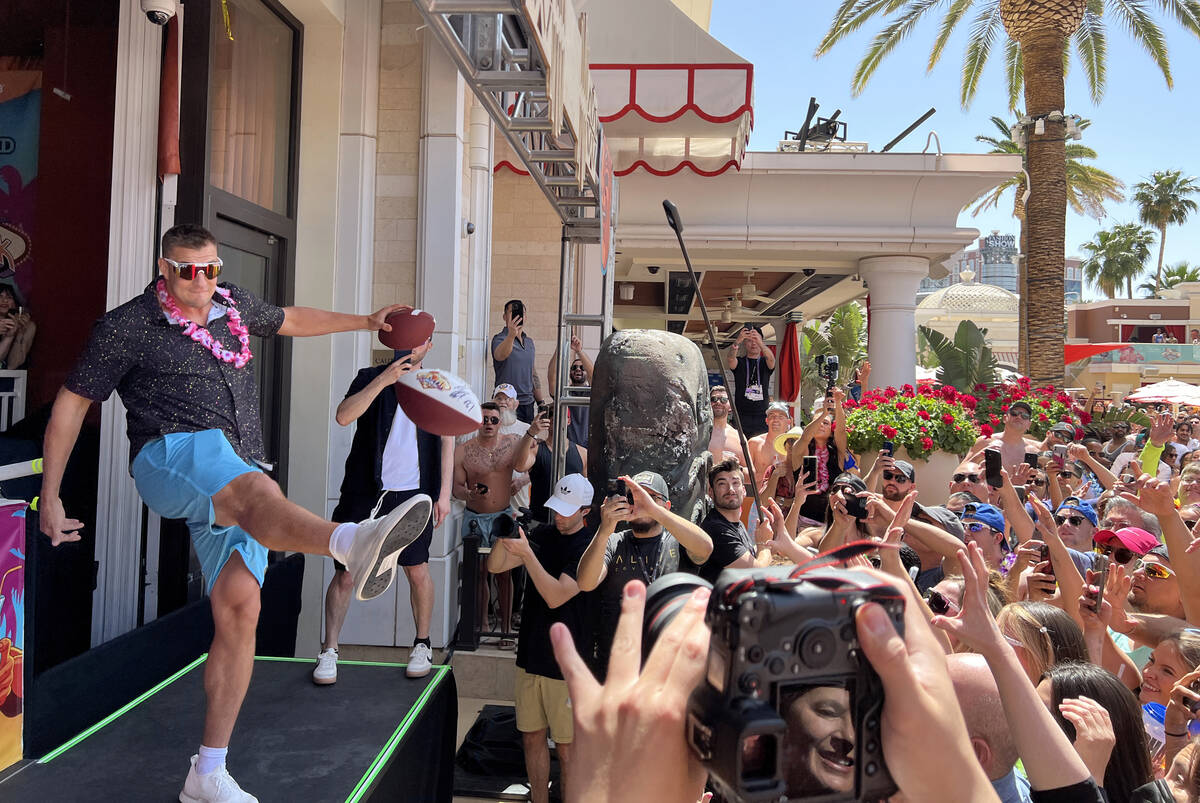 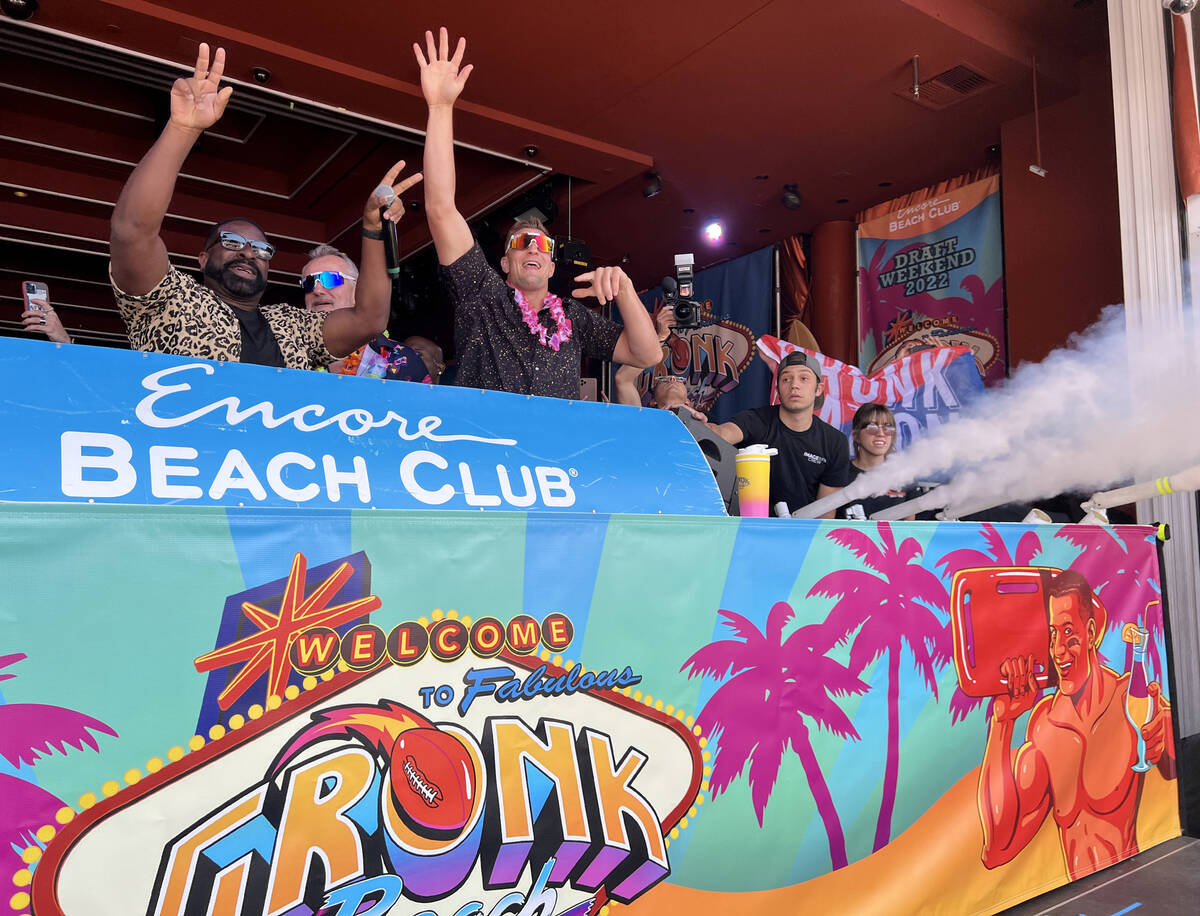 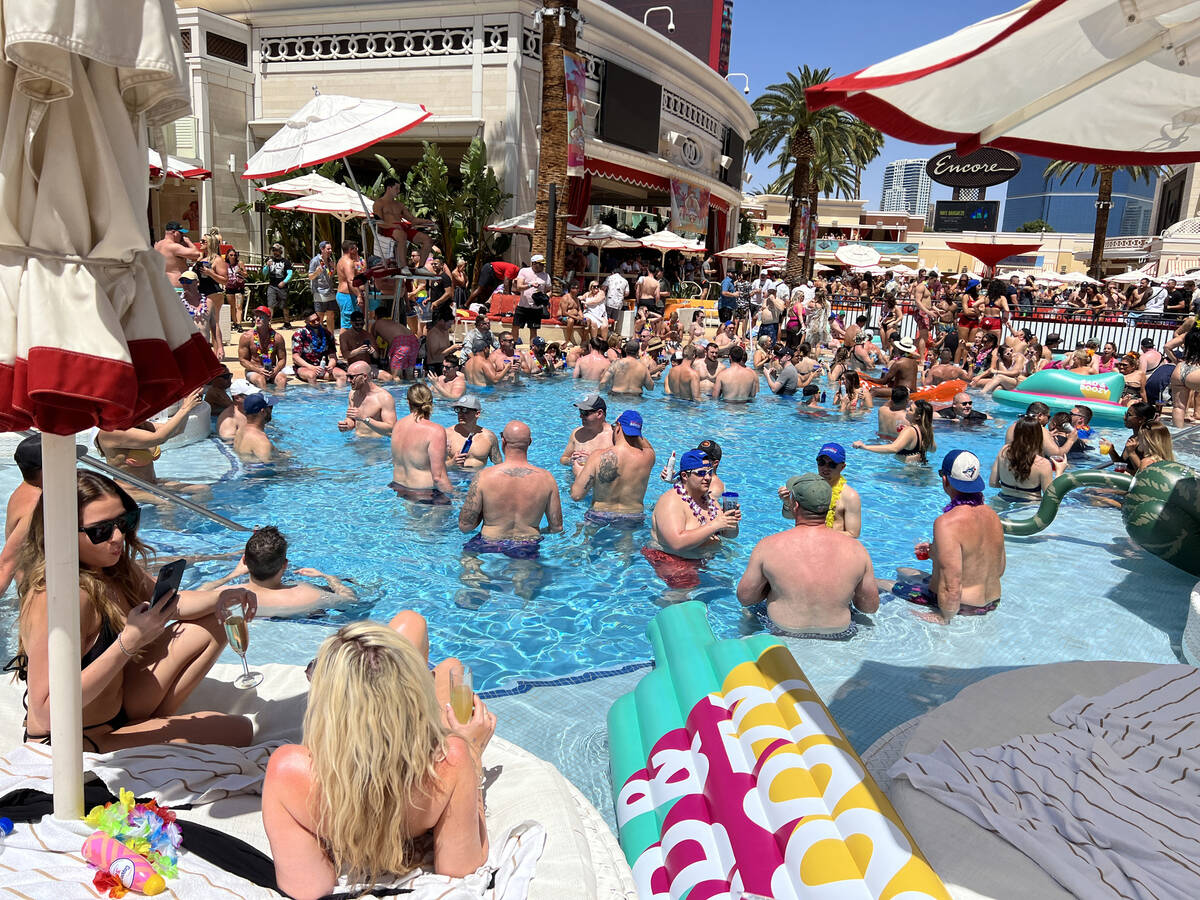 People soak up the sun during Gronk Beach party at Encore Beach Club on the Strip on Day 2 of the NFL draft in Las Vegas Friday, April 29, 2022. (K.M. Cannon/Las Vegas Review-Journal) @KMCannonPhoto

The Gronk Hotel & Casino? The Gronk Bar & Grille? Gronk Sandbar Beach Club? The Viva Gronk Vegas Saloon, where you can get ‘86ed by No. 87?

Rob Gronkowski has no plans to expend his Gronk appeal beyond what we experienced at Encore Beach Club on Friday. The Gronk Beach Las Vegas party, headlined by Wynn Nightlife EDM stars The Chainsmokers, drew about 5,000 to the Wynn Las Vegas aquatic fortress.

“Not at all, really. This is just all about the Gronk Beach party, I haven’t talked to anybody about having a Gronk resort, or a Gronk Bar, or anything like that,” the fabled (and kinda retired) tight end said just before hitting the stage. “But this could maybe lead to something in the future. If it’s a success, which I’m pretty sure it is going to be because we have The Chainsmokers playing for a sold-out crowd, maybe we can look into bigger things in Vegas.”

As promised, Gronk came with loose lips and swiveling hips in is first Gronk Beach party in Vegas. He’s so clearly at home here, especially at the DJ turntables and somewhere near the water.

Though he’s apparently been hitting the gym (if not the bar) routinely, Gronkowski was not interested in an announcement about his playing career. “You think I’ve thought about football one single time, this week? Heeeck no! No chance!” he told TMZ prior to the event.

Gronkowski, who swaps “Roberto” with his well-known Gronk moniker, was excited to see the draft visit Vegas. He appreciates the league’s embrace of the city.

“I’m glad they are here, they have the Raiders, it’s great for the NFL to be in Vegas. (It’s) an excuse to visit Vegas,” Gronkowski said. “Having the draft here has brought some electricity to the Strip.”

We’ve broached the subject of staging the draft annually in Vegas. Gronkowski stopped short of broaching it himself.

“That said, Vegas should definitely be in rotation for the draft. When you’ve had the Pro Bowl and you’re going to have the Super Bowl — you can’t beat this town for hosting events.” And that includes the Gronk Beach Party. Expect it to return, whether or not it’s namesake is retired.

The stunt Criss Angel performed Friday at NFL Draft Theater was the act the Planet Hollywood headliner performed at Allegiant Stadium in October. Angel worked free from a straitjacket while spinning from a harness high above the crowd.

Twitter nods to Zac Jackson of The Athletic, who posted, “There are previous Browns regimes who would have taken Criss Angel in the third.” And from draft analyst Jacob Infante of The Draft Wire, “I don’t wanna see Criss Angel risk his life in a magic trick. I wanna see an old man read a name off a card.” There is a large community of NFL fans who would have paid to see Commissioner Roger Goodell try the act himself.

Musician Otto Ehling of David Perrico and the Raiders House Band has been playing a the Draft Theater, then crossing the Strip to take his spot at “O” at the Bellagio, where he’s the show’s keyboardist (and, we expect, key-tarist). Ehling posted Thursday, “Ran thru 100K people to get here but I’m ready!”

Vegas singer/songwriter Shawn Eiferman hosts weekly open-mic shows at 9 p.m. Wednesdays at The Shag Room at Virgin Hotels Las Vegas. Eiferman was a COVID Shutdown Hall of Famer with”That Vegas Show,” the virtual shows from the master bathroom of his Vegas home. The Shag Room is more Eiferman’s style. No cover, and a righteous groove in that club.