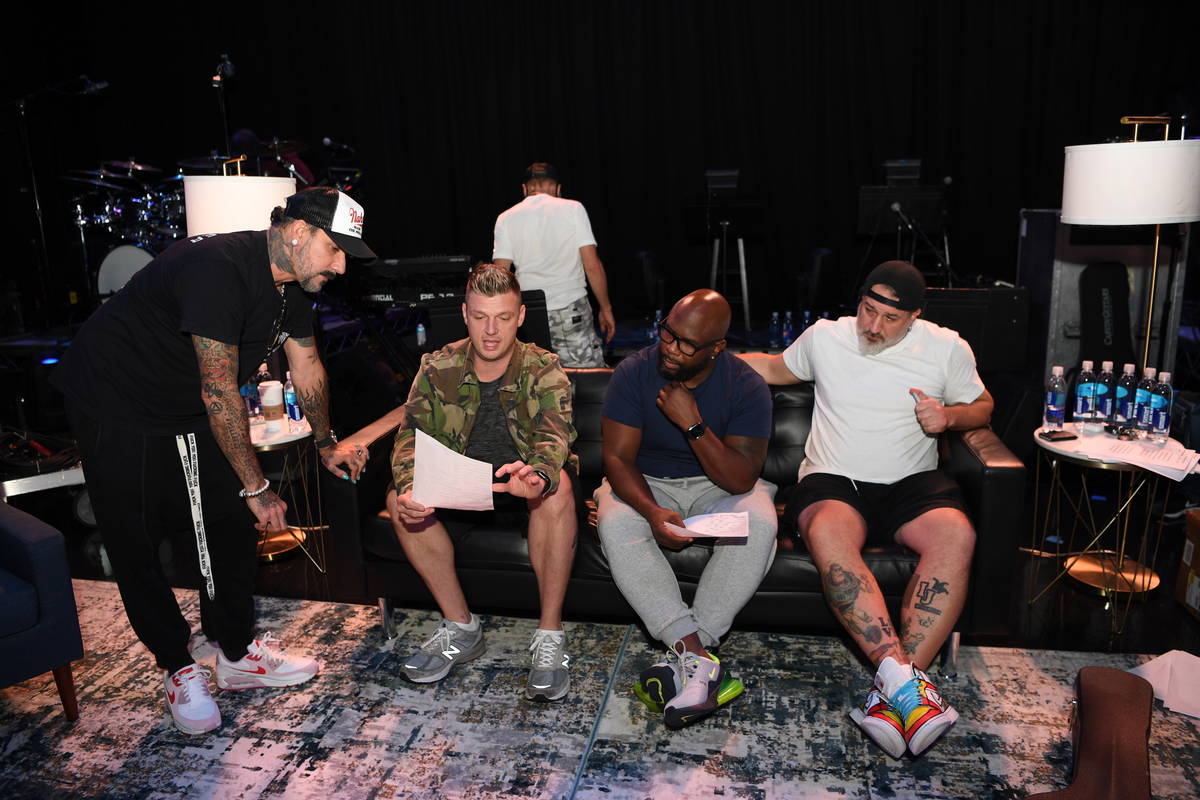 AJ McLean and Nick Carter of the Backstreet Boys, Wanya Morris of Boyz II Men and Joey Fatone of 'N Sync go over show notes for "The After Party" at Sands Showroom at The Venetian on Thursday, Aug. 20, 2021. The show runs through Sunday night. (Denise Truscello) 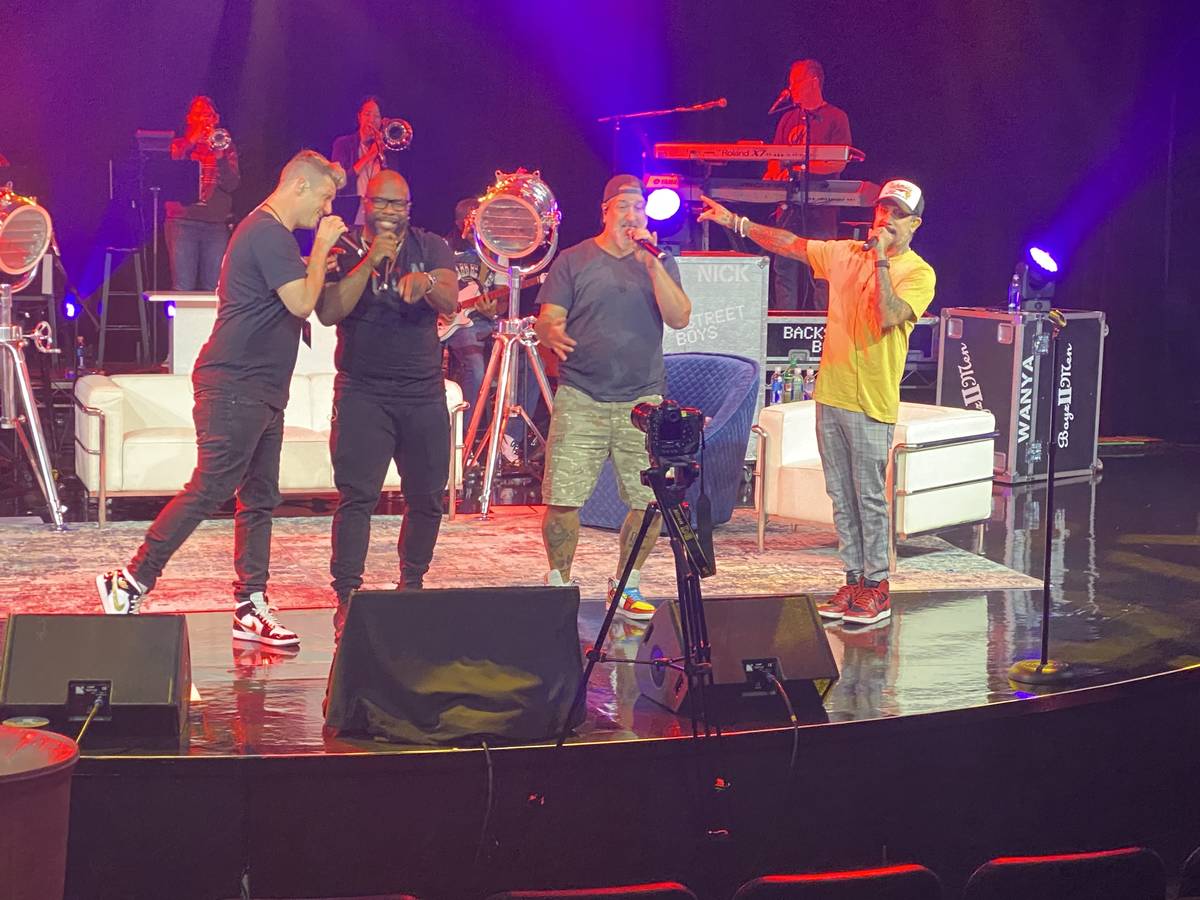 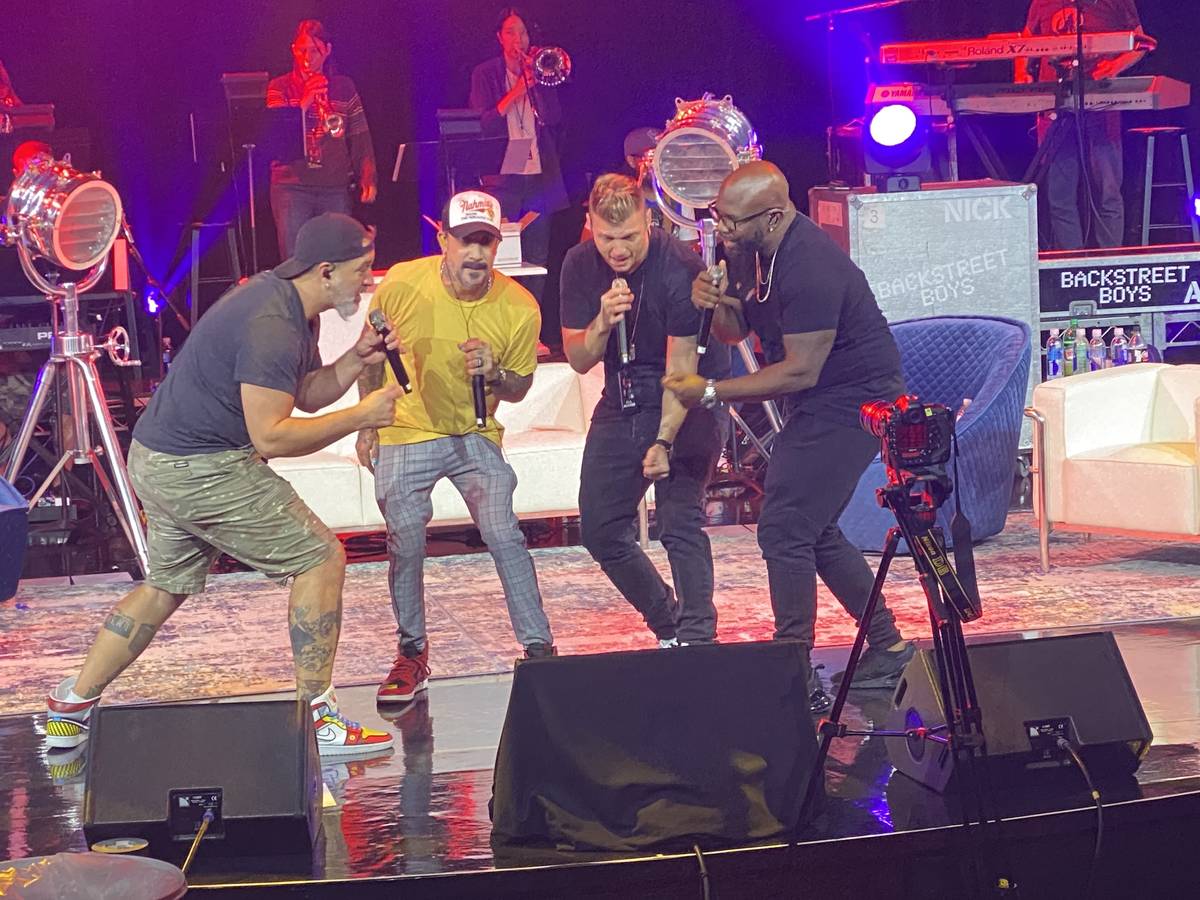 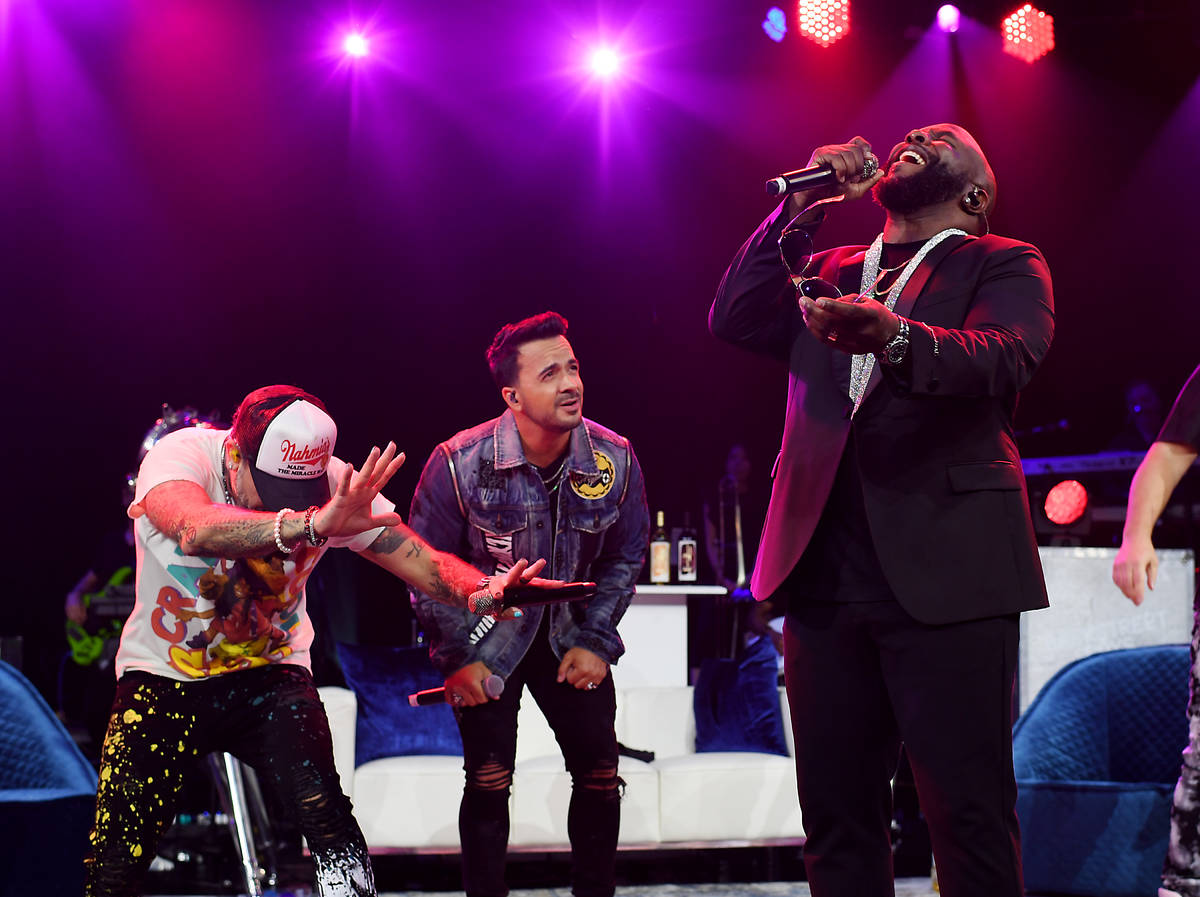 AJ McLean, Luis Fonsi and Wanya Morris perform in "The After Party" at Sands Showroom at The Venetian on Thursday, Aug. 20, 2021. The show runs through Sunday night. (Denise Truscello) 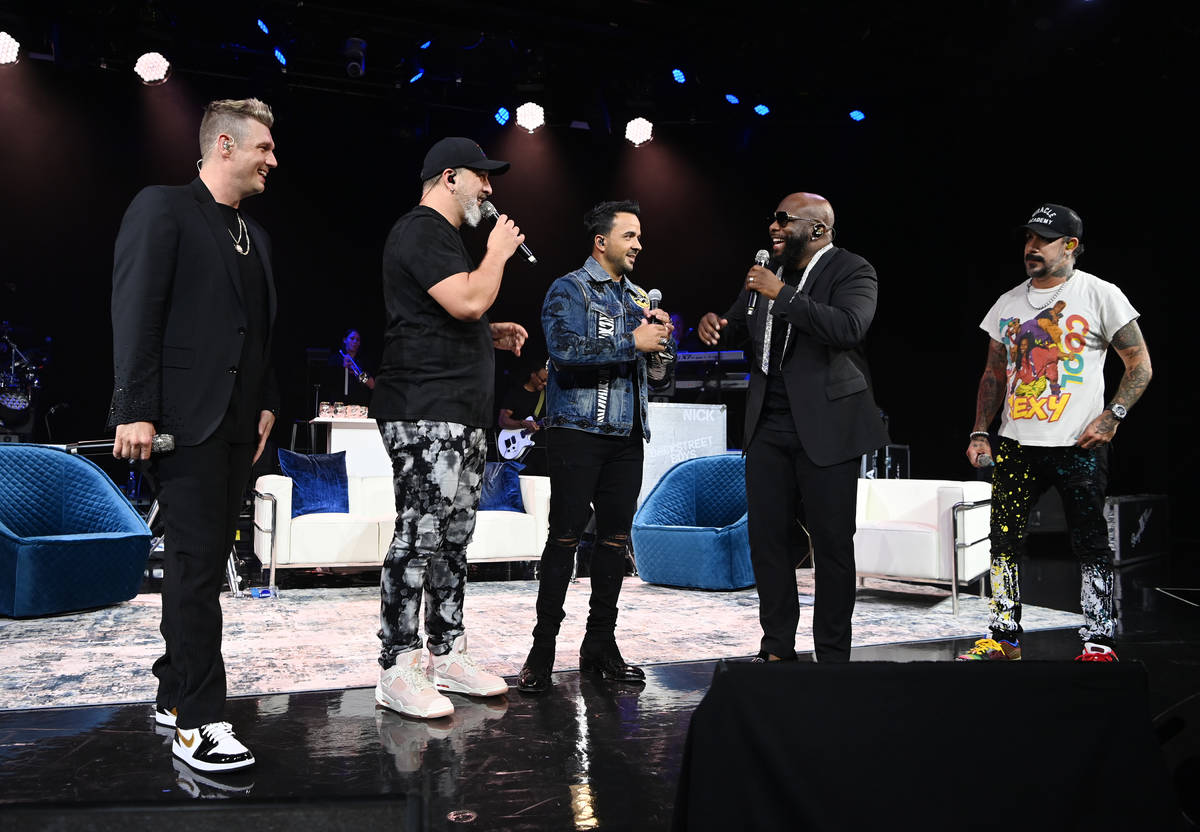 Nick Carter, Joey Fatone, Luis Fonsi, Wanya Morris and AJ McLean are shown "The After Party" at Sands Showroom at The Venetian on Thursday, Aug. 20, 2021. The show runs through Sunday night. (Denise Truscello) 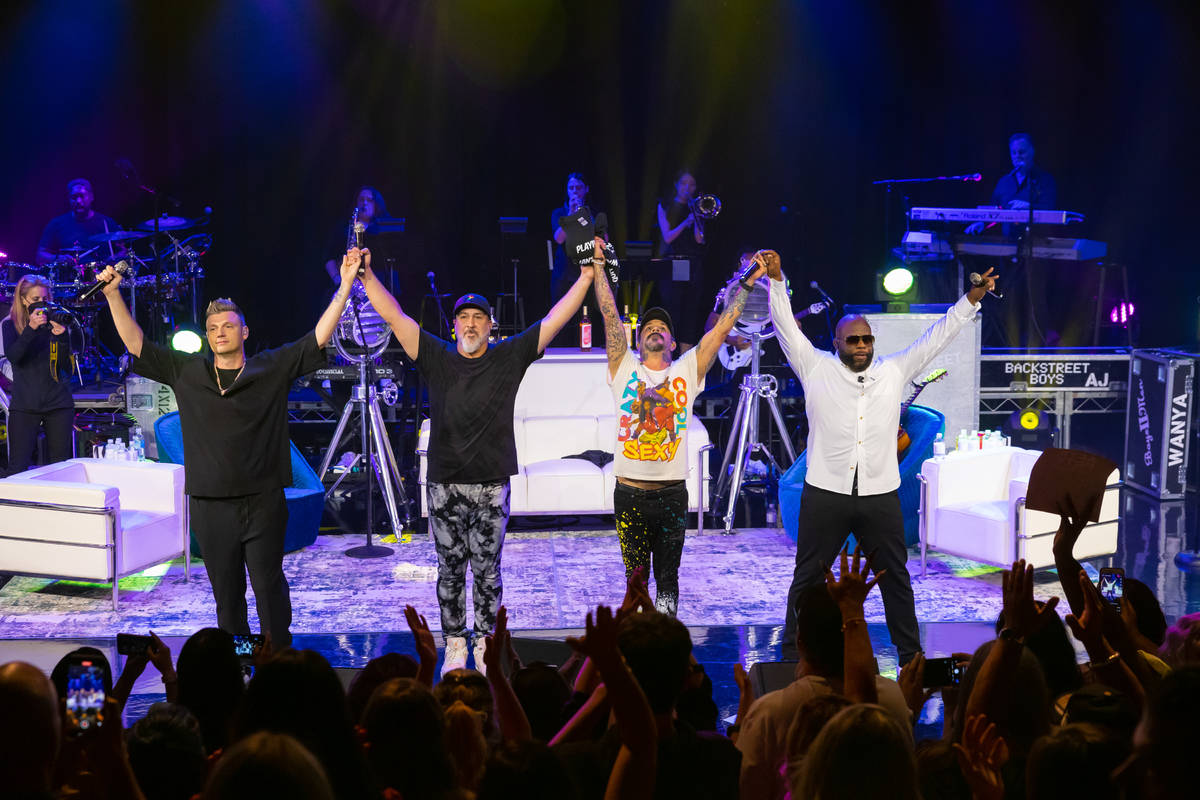 Nick Carter, Joey Fatone, AJ McLean and Wanya Morris are shown "The After Party" at Sands Showroom at The Venetian on Thursday, Aug. 20, 2021. The show runs through Sunday night. (Pat Gray/Erik Kabik Photography) 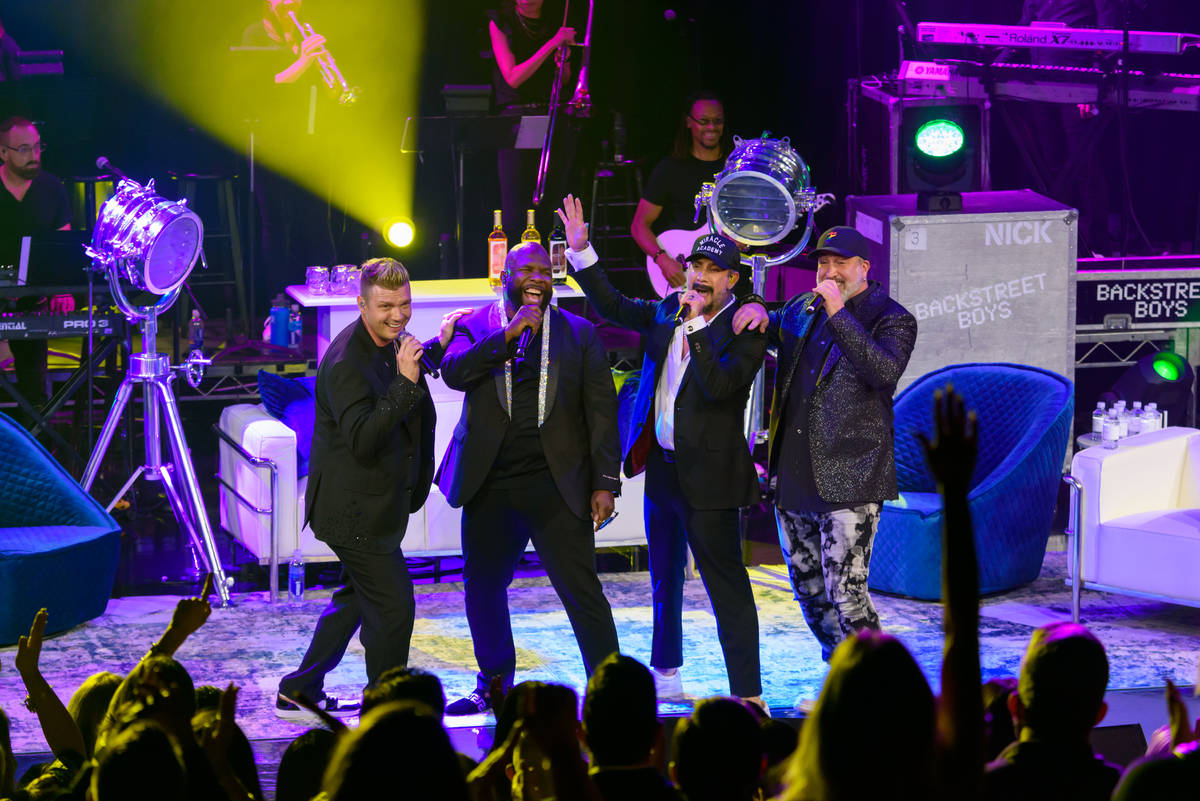 Nick Carter, Joey Fatone, AJ McLean and Wanya Morris are shown "The After Party" at Sands Showroom at The Venetian on Thursday, Aug. 20, 2021. The show runs through Sunday night. (Pat Gray/Erik Kabik Photography)

The Kats! Bureau at this writing is Sands Showroom at The Venetian. To my almost immediate left, Nick Carter is singing and dancing to “Larger Than Life.” The scene is rehearsals for “The After Party” series, co-starring Carter and AJ McLean of Backstreet Boys, Wanya Morris of Boyz II Men and Joey Fatone of ‘N Sync.

The production marks the first time these four performers, and members of these three bands, have been assembled on the same stage. It’s also the final show for Carter and McLean before BSB reunites in full for “A Very Backstreet Christmas Party” running from Nov. 11-Dec. 23.

It’s always a party with these guys, and this is true even in rehearsals, when the banter often slips into salty language as the guys hack it up. We feel Fatone’s plastic Coke bottle will be replaced by a glass of some hard liquor for the actual show.

“After Party” is also the last show in this theater before it is renamed The Summit Showroom. Incoming owners from Apollo Global Management and Vici Properties are not permitted to use the name “Sands” anywhere at the hotel.

The primary headliners over the past decade at Sands Showroom, Human Nature, was produced by Adam Steck’s SPI Entertainment company.

HN played the room for seven years before the show was shut down because of COVID in March 2020, longer than any Venetian residency production. Steck is also co-producer of “The After Party.”

The Summit Showroom title pays homage to the shows hosted by Frank Sinatra, Dean Martin, Sammy Davis Jr., Joey Bishop and Peter Lawford during the filming of the original “Ocean’s 11” in 1960.

It is appropriate, then, that these four gents are taking the stage on that hallowed ground. Fatone says, “This is just about having fun and playing music that people recognize.”

Unbilled guests are planned every night. Thursday it was Luis Fonsi, the Puerto Rican star who hit with “Despacito” featuring rapper Daddy Yankee. Fonsi and Morris also lit it up on a duet of “Open Arms.”

Gauging from this rehearsal, the crew’s energy is at once palpable and genuine. There seems no manufactured shtick, though there is some scripted material for the living room chat. The show runs just four performances, but co-producer Joe Mulvihill has amassed a presentation that feels it could run for weeks.

We see furniture onstage, for instance. The stage kind of looks like an RC Willey display space, as if placed backstage at a rock concert.

A blue-and-white living room set, where the guys hang and “riff.” Stage lights are placed in the middle of the stage, too. Equipment cases stamped with “Backstreet Boys,” “Boyz II Men” and “‘’N Sync” logos are placed seemingly at random, as if to remind the crowd the combined power of those onstage.

The band is highlighted by a three-piece, all-female horn section. It seems a lavish approach for what is really built as an informal, cool hang among buddies.

“People thought I was crazy,” Mulvihill says as he looks at the stage. “A horn section? Furniture on the stage? But it works. These guys really pop.”

Kelly Clinton-Holmes returns to regular performances on Sept. 9 with “The Sit In” at The Nevada Room Showroom at Commercial Center. Clinton-Holmes was ill with COVID, and related symptoms, for four months before performing a one-off at Starbright Theater on July 17.

More to come on this. But one facet of Clinton-Holmes’ move to the historic Commercial Center is her Monday evening, Open Mic Nights at Bootlegger Bistro have ended. The show itself is COVID casualty, though Clinton-Holmes could wind up at Bootlegger again in a different format. But next month, she’s a Nevada Room headliner.

Beatles fan and event producer Paul Casey is bringing the “All You Need Is Love” celebration to the replica Abbey Road crossing on Fremont East. The event is set for 7 p.m.-8 p.m. and is is loosely tied to the 60th anniversary of The Beatles forming under that name. A “Sgt. Pepper” memorabilia display, sign presentation and wedding ceremony are part of the free-to-the-public event. Info at abbeyroadlv.com.