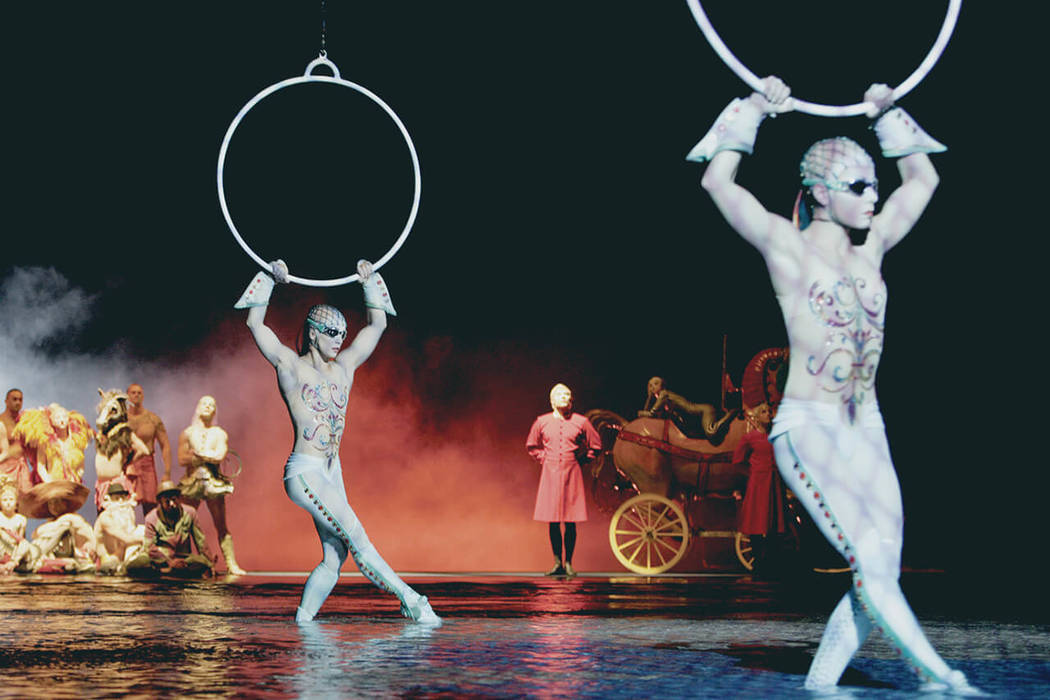 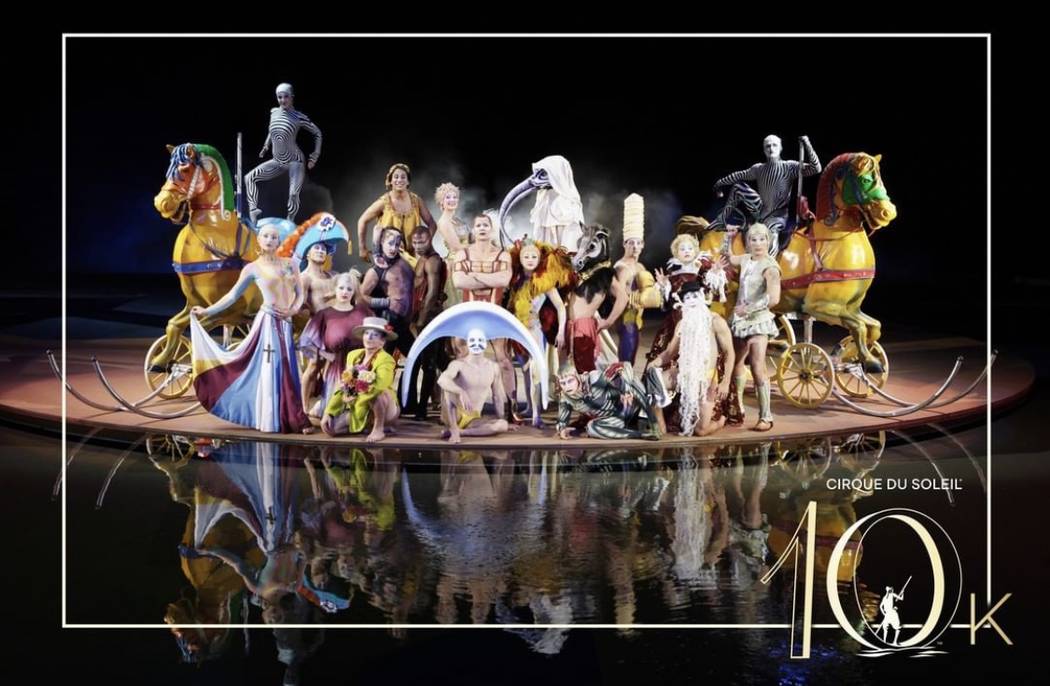 The cast of "O," shown in a promotional shot after the show celebrated its 10,000th performance at Bellagio on Sunday, Sept. 1, 2019. (Cirque du Soleil) 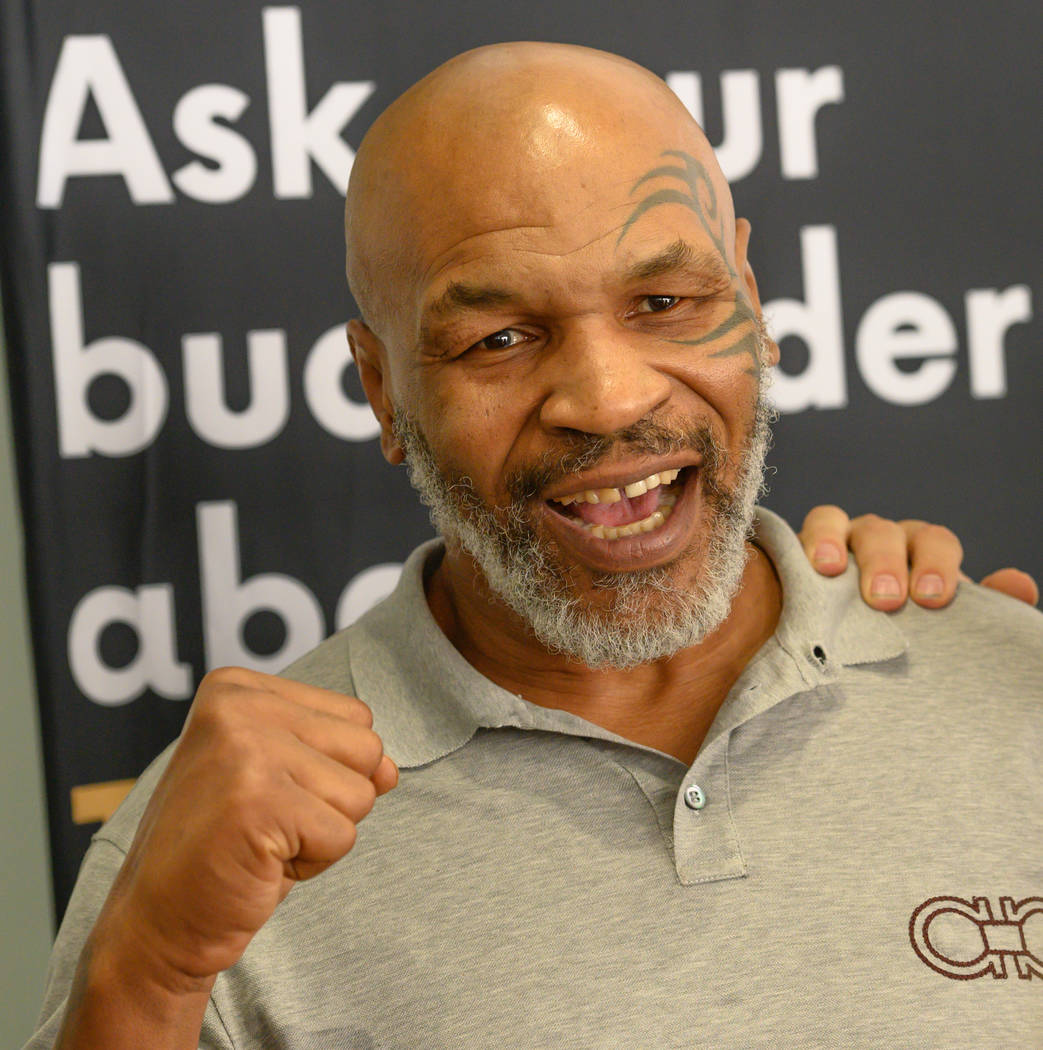 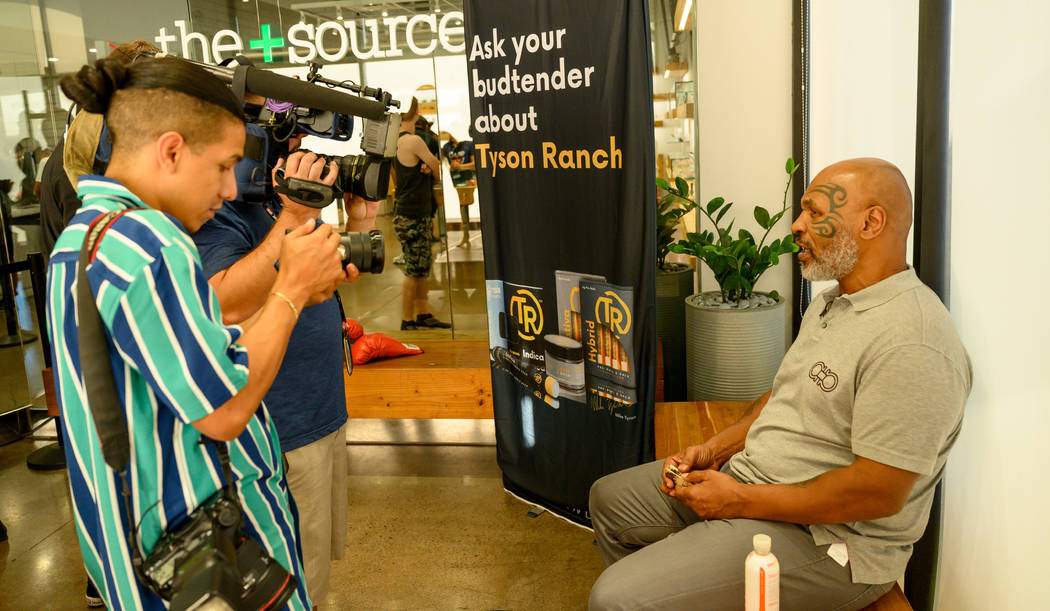 Mike Tyson is shown during an interview at the Source cannabis dispensary in Henderson on Saturday, Aug. 31, 2019 (Tom Donoghue) 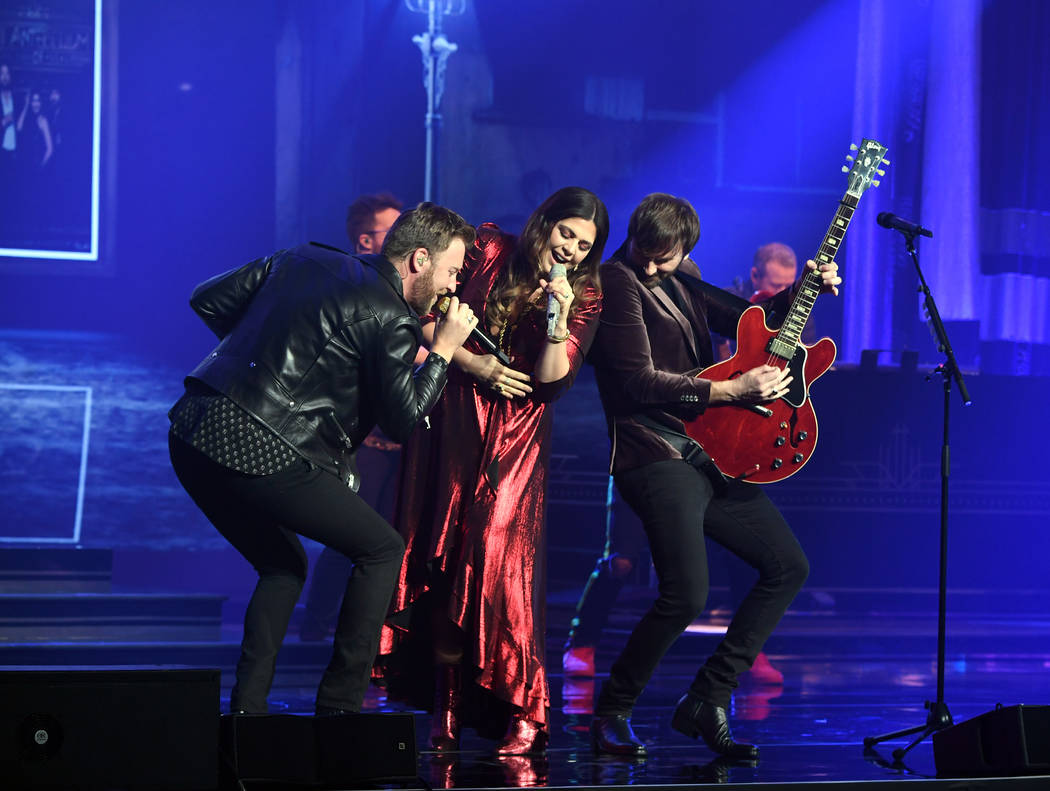 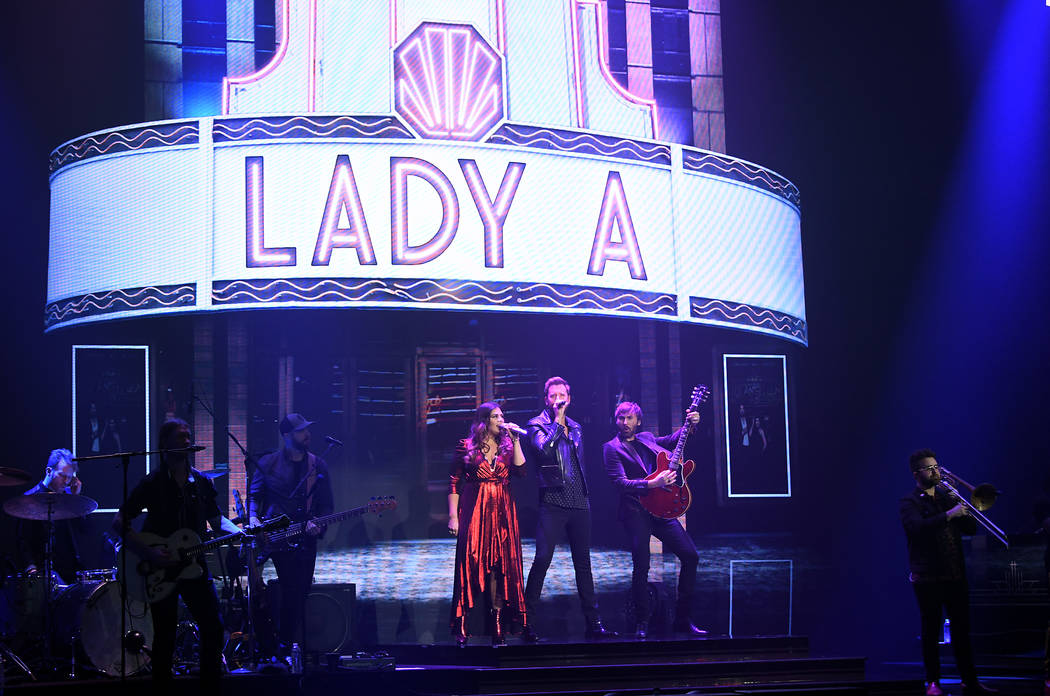 Lady Antebellum performs at the Pearl at the Palms on Friday, Feb. 8, 2019, in Las Vegas. (Denise Truscello) 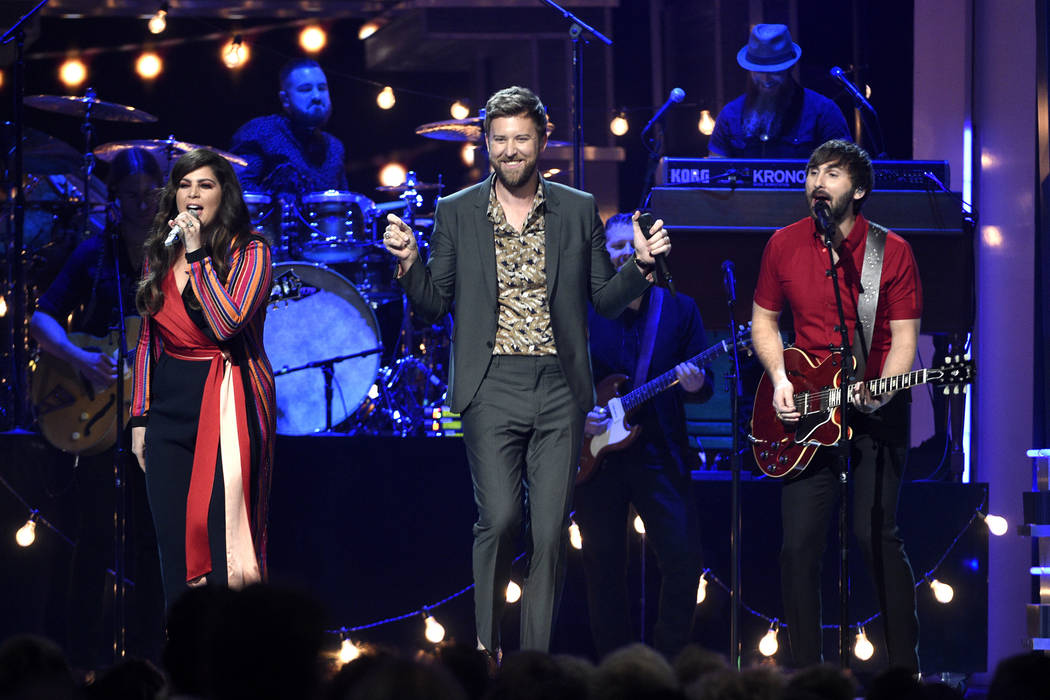 Hillary Scott, from left, Charles Kelley, and Dave Haywood, of Lady Antebellum, perform at the 52nd annual Academy of Country Music Awards at the T-Mobile Arena on Sunday, April 2, 2017, in Las Vegas. (Photo by Chris Pizzello/Invision/AP) 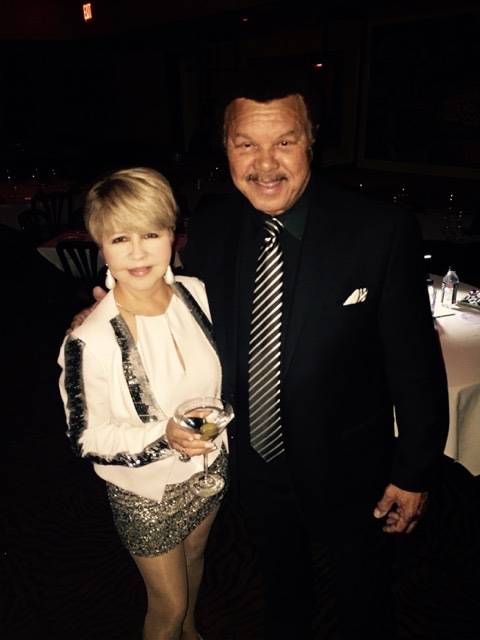 Many productions in Las Vegas celebrate their 100th performances, and 200th and so on, with champagne and a cake. The city’s hyper-competitive entertainment atmosphere makes every 100 shows an achievement worth toasting.

But if “O” marked every 100 shows in such a way, the cast would be too chubby to perform anything but cannonballs.

Still, the aquatic masterpiece soared past No. 10,o00 at Bellagio on Sunday night, celebrating with a nonchalance forged over a 21-year run. The cast held an internal celebration between the early and late show but it was otherwise (show) business as usual.

But the show’s success and effect is no joke. “O” has inspired two other Vegas institutions: Celine Dion’s “A New Day …” and Cirque’s own “Love.” Dion was driven to develop her show at Caesars Palace after she and Rene Angelil checked out Franco Dragone’s work in the Cirque production soon after it opened.

Also, during the show’s early era, Paul McCartney and George Harrison were spotted in the audience when Apple Corps (the Beatles business company) was in talks with Cirque to create “Love.”

Having performed for more than 17 million guests, “O” is setting the pace again as it expands its schedule to a no-dark, seven-day-per-week rotation starting in January. Select dates are two-show nights. It’s an achievement worth celebrating, typically. But forgive the cast of “O” for taking a pass.

Mike Tyson, the former heavyweight champ who resides in Las Vegas, made two appearances at local dispensaries Saturday promoting his Tyson Ranch cannabis line. He fired up the scene, as it were.

Tyson was at Planet 13, 2548 W. Desert Inn Road, in the early afternoon, then moved to The Source, 9480 S. Eastern Ave. in Henderson. Tyson has been in business since the spring; his Tyson Ranch is a 40-acre cannabis retreat near California City, in Antelope Valley, about 100 miles north of L.A.

The fistic icon says his company consists of a staff with more than 100 years of industry experience. That experience starts at the top, naturally. Tyson disclosed on his “Hotboxin’ with Mike Tyson” podcast a couple of weeks ago that he and business partner Eben Britton smoke about $40,000 worth of “product” a month. A seriously staggering intake. Where is legendary ref Joe Cortez with a standing eight-count?

Lady A bows out

Lady Antebellum closed its 15-date “Our Kind of Vegas” residency Saturday night at Pearl Concert Theater. In a statement, co-founder Hillary Scott called the residency run “a milestone in our career” and said, “It was a bittersweet feeling to step on that stage for the last time … but my goodness has it been a gift and we are beyond grateful.”

Palms General Manager Jon Gray said, “Having Lady Antebellum’s first Vegas residency was an honor. It was a huge hit with the fans and our guests. This is a band that put an incredible amount of thought into creating this show and delivered 110 percent every performance. Signing Lady A as a resident was a big part of showcasing the Pearl as a world-class concert theater and the Palms as a premier entertainment destination.”

The Lady A residency reminds me most of the Reba, Brooks & Dunn run at the Colosseum at Caesars Palace, a country show that also rocks the place. Great showmanship, too. Lady A has set itself up for a return, be it at the Pearl or elsewhere.

A portion of ticket sales go to the Washington State University College of Veterinary Medicine for bio medical and oncology research (though located in Pullman, Wash., the school provides universal benefits for pet owners across the country — I know because Daddy Kats earned his veterinary degree from Wazzu). Holland-Wright is dedicating the performance to her “fur baby” Gus, a Labrador she lost to cancer a decade ago.

Fortenberry is also returning to mainland China for his second tour of the region from Oct. 14-Nov. 4. His “Salute to Broadway” series covers 14 cities, including a dozen he did not hit on his three-week tour of China in August 2018. It’s just Fortenberry and a piano, opening a channel for music that is heretofore unknown to that massive audience.

Fortenberry gained notoriety as Liberace’s hand and body double for the 2013 HBO film “Behind the Candelabra,” starring Michael Douglas as the legendary showman. Fortenberry has also performed in 10 Broadway musicals, including “Jesus Christ Superstar,” “Cats,” “Ragtime” and “The Lion King.”

Lost to history, almost, is Fortenberry’s “Cleavage: A Titillating Musical Comedy,” which the composers says went “bust” after just one performance.

One of the sidebar debates as “Blanc de Blanc” has opened at Sahara is, who was first to devise a sway-pole act in a Las Vegas stage show? “Absinthe” debuted its wildly popular version this spring at Caesars Palace, but “Blanc” creator Scott Maidment has worked with the act for the past seven years and, along with choreographer Kevin Maher, helped develop the sway-pole effects in Madonna’s “Rebel Heart” tour in 2015-16 …

On the “Blanc” front, the show premiered its VIP hot-tub ticket package Sunday night, with cast members from “Love” wading into the two Jacuzzis for the second half of the performance. Weird, yet fun …

A Vegas entertainment vet has asked if it were true that “Marilyn” is finally returning to Paris Theater. Would love to revive that show from its coma, but not there yet. At least not in the fall. Caesars Entertainment does own the production, which remains an active project, and Paris Theater remains appreciably vacant …

As Sean explains, “I started posting artwork a few years ago as a way of promoting something positive on social media, as opposed to engaging in divisive political arguing and fighting.” It’s always a pleasant diversion.

Pia Zadora and Sonny Charles are back with “Pia’s Place” at 8:45 p.m. Fridays and Saturdays at Piero’s Italian Cuisine. Sammy Gonzales dives in as Liza Minnelli and Gary Anthony appears as Frank Sinatra. Buy the dinner and enjoy the show, especially Pia’s yarns about her days opening for Sinatra and Charles’ performance of The Checkmates’ hit “Black Pearl.”