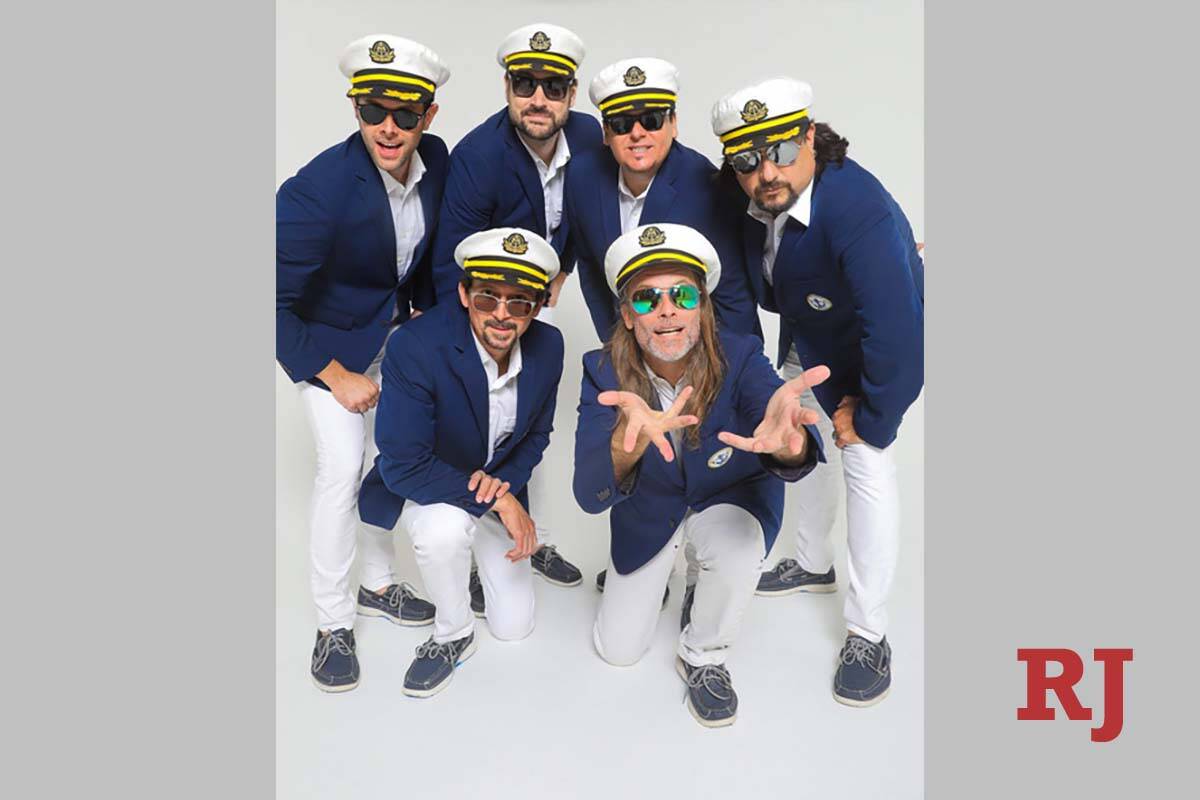 The cover band Yächtley Crëw, aka "The Titans of Soft Rock," play Kaos at the Palms on Saturday night. (Yächtley Crëw)

Yächtley Crëw, aka "The Titans of Soft Rock," are shown in a promotional photo. The cover band plays Kaos at the Palms on Saturday night. (Yächtley Crëw)

It would be tempting to describe Yächtley Crëw simply as a cover band. But it is more. It is a trend-setter, a movement, an ocean spray to the face during the torrid summer months.

Beating the heat while keeping the beat, Yächtley Crëw makes its Las Vegas premiere at 7:30 p.m. Saturday at Kaos at the Palms. This is the venue once known as Kaos Nightclub. “Nightclub” is no longer in the title as the space expands its scope. Yächtley Crëw, the room’s first ticketed act under the hotel’s San Manuel Tribe ownership, is helping navigate that direction.

A musical subcategory since about 2005, Yacht Rock is formerly known as smooth rock or soft rock. “Sailing” by Christopher Cross is a forerunner of the format, obviously as the song is an anthem for rocking on a yacht. “Africa” by Toto, “Maneater” by Hall and Oates, “Escape (The Pina Colada Song)” by Rupert Holmes, and “Reminiscing” by Little River Band. The SiriusXM has assigned an entire station, Yacht Rock Radio, to the format.

L.A.-based Yächtley Crëw has seized the breeze and developed a fully realized, touring tribute act. Singer Phillip Daniel, aka Philly Ocean onstage, says the waves developed about five years ago. Members of the band had been playing Doobie Brothers, Hall and Oates, Steely Dan and Toto. They commiserated about how to consolidate their very real music skills. They committed to the Yächtley Crëw concept and moniker, and opened the sails.

“We used to sing this stuff at karaoke together,” Daniel says. “In all honesty, we didn’t know if we’d be even playing for six months. We didn’t know if we play one show, or 1,000. I guess it was a kind of a benefit, that we didn’t have any expectations. We were literally just doing it because we thought it would be fun.”

Yächtley Crëw is now on a 34-city tour. They will arrive decked out in their blue blazers and matching boat shoes, and signature sailing caps. Expect expert musicianship and high energy on Kaos’ high seas.

“The guys in our band are brilliant musicians, and we just do something very different. In addition to playing the songs, we put on a show, it’s all the songs that you know and love,” Daniel says. “The folks in the crowd are in the party with us. We love the music. We love performing. We love being in a band. And more than anything, we love seeing the joy that it brings to people.”

Lupita D’Alessio is the second announced act to headline the reopened Pearl Concert Theater at the Palms, 8 p.m. Oct. 15. Tickets start at $59 (not including fees), onsale at ticketmaster.com. The popular Mexican singer’s most recent album, “Aquí Estoy Yo (En Vivo Desde Arena CDMX),” was captured in front of 15,000 fans at Mexico City’s Arena Ciudad de México. The 68-year-old star has recorded more than 50 albums over a 50-year career, and in June was presented the Legend Award at the Latin Grammys show at Michelob Ultra Arena at Mandalay Bay.

The ever-rocking Pat Benatar and Neil Giraldo, announced this month, perform at The Pearl on Sept. 3.

Mayfair Supper Club at Bellagio is shaking up its cast and format. Producers No Ceilings Entertainment are updating the music, dance numbers and pumping up the comedy in the supper-club experience. The show’s soft debut was this week. Consider this a “rolling” debut.

Among the newbies, Claire Souliér portrays Mae Montgomery, a character inspired by Madonna, Lady Gaga, Marilyn Monroe and Mae West. Jason Martinez, well-known around VegasVille, is Fred Lowell, an homage to Fred Astaire. The revised setlist includes such familiar numbers as “It’s all right,” “Watermelon Sugar,” “Creep” and “Me and Mrs. Jones.”

Choreographers Dean Lee, Keo Motsepe and Shannon Mather are adding new numbers and working with new dancers from a field of more than 400 applicants from around the world. Broadway playwright Adam North has created a comedic storyline, which reconnects two longtime entertainment friends and former housemates for a final performance in, where else? Las Vegas.

The costumes are also being redesigned (from the release) “with pops of bright pink, deep reds, golds and metallics delivering all the on-stage glam.” The Bellagio water show in the background remains unchanged.

We have a fusion of “America’s Got Talent” and “American Idol” at International Theater at Westgate Las Vegas on Aug. 6. “AGT” finalist Daniel Emmet and “Idol” finalist Pia Toscano headline a one-off, “Simply The Best: A Night of Duets.” The duo will sample pop, classical, rock, and Broadway selections covering multiple generations.

A 24-piece orchestra is being assembled, so this is an extensive endeavor.

The show is presented by Mark Shunock’s Mondays Dark, with some of the proceeds going to that Vegas-based organization. Tickets start at $49.95 (not including fees), going onsale 10 a.m. Friday at ticketmaster.com or the Westgate box office.

We have rare photos of Adele in rehearsal, posted to her social media accounts Thursday morning. “Who’s ready for tomorrow?” she asks, referring to her upcoming two-show stint at Hyde Park in London.

Those shows are still on the books for Friday and Saturday. We can expect that same question (cough) when the superstar returns her residency plans for the Strip.

Catch the rock ‘n’ soul stylings of the Gregg Peterson Band at 8 p.m. Friday at Naughty Ladies Saloon at Arizona Charlie’s Decatur. The band is back July 8, Aug. 19, Sept. 2 and Sept. 16. No cover. Drop the name of Marvin “Sweet Louie” Smith and see if anyone remembers.