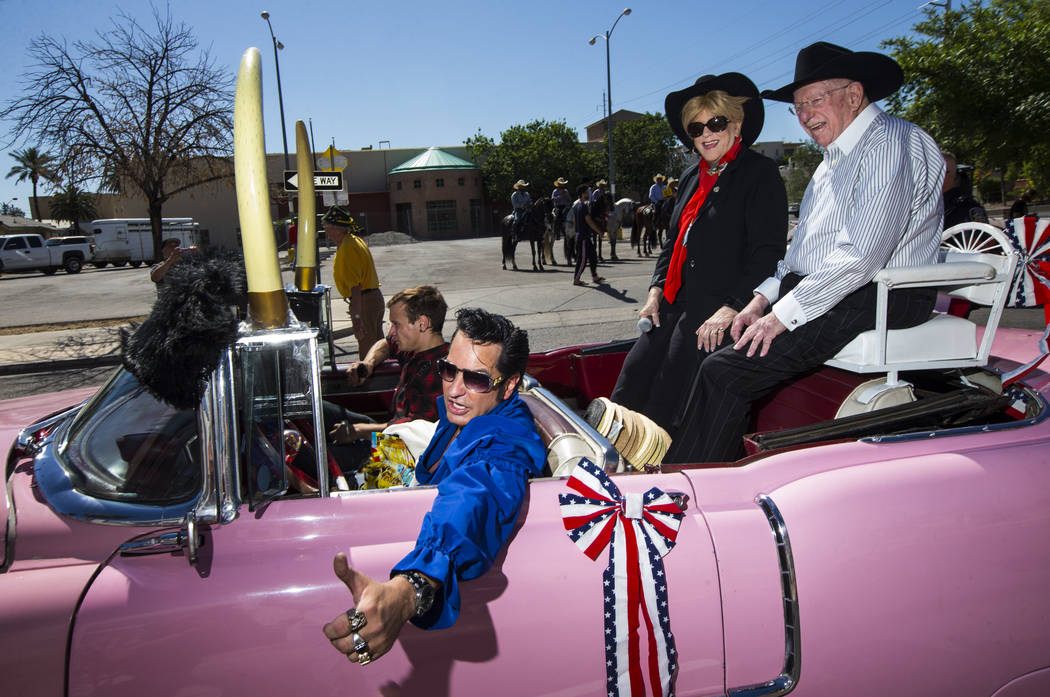 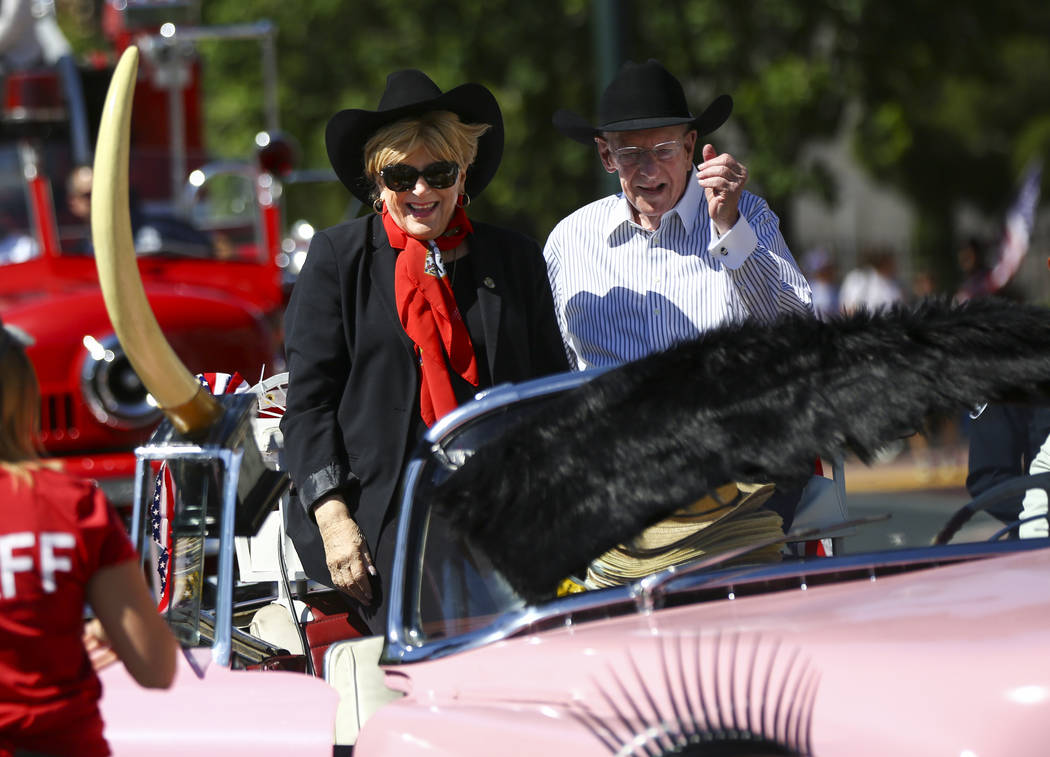 Mayor Carolyn Goodman, left, with husband Oscar Goodman before the start of the Helldorado Parade along Fourth Street in downtown Las Vegas on Saturday, May 11, 2019. (Chase Stevens/Las Vegas Review-Journal) @csstevensphoto 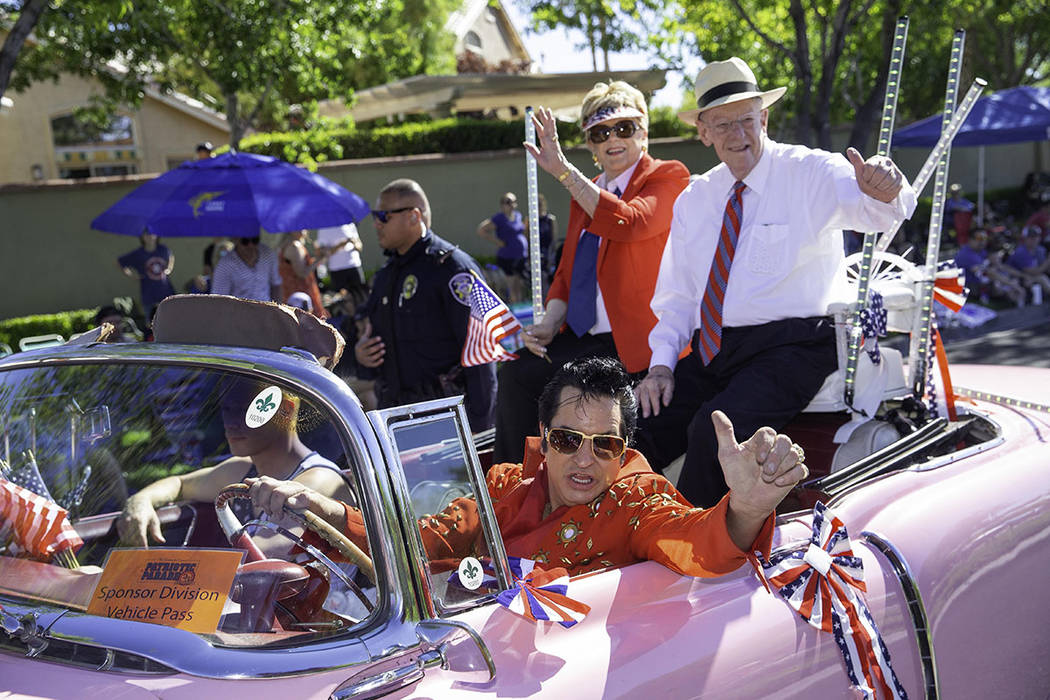 The Kats! Bureau at this writing is Brightside Breakfast & Burgers. Try the ham, cheese and egg breakfast sandwich or the veggie if you’re a non-meat eater. Add a FizzyWater. Nice mid-afternoon snack.

Earlier, I sat in a booth with former Las Vegas Mayor Oscar Goodman upstairs at Oscar’s Steakhouse for an upcoming episode of PodKats! I asked him how it feels to be 80, a mark he hits on July 26.

“I feel great, healthwise. My brain cells are the biggest in the world, because of the Bombay Sapphire. They are in great shape,” Goodman said. “The bod is not going to win any Charles Atlas awards, but it gets from place to place.”

Goodman is being celebrated at 5 p.m. Thursday at Fremont Street Experience with an 80-bartender toast at Main Street Stage. The $20 ticket, which includes a Bombay martini and a commemorative casino chip, is being donated to the Cleveland Clinic Lou Ruvo Center for Brain Health. Frankie Scinta is hosting, and a post-event hang is set for Oscar’s restaurant (go to keepmemoryalive.org for ticket and dinner info).

Entering his birthday party, Goodman talked of the chemistry between he and his wife, current Mayor Carolyn Goodman. The mayor was diagnosed with stage 2A breast cancer in January and has fought off the disease since.

Goodman revisited the moment he learned of his wife’s diagnosis.

“Oh, there is no feeling like it,” Goodman said. “It’s the worse feeling in the world. You can’t breathe.”

Goodman paused and continued what his wife’s partnership has meant to him. The couple celebrated their 57th wedding anniversary in June.

In his three terms, Oscar Goodman kept a tireless pace that wore out even the marshals assigned to protect him. But even he has marveled at Carolyn Goodman’s schedule in two-plus terms in office.

“She is amazing. She is out before 7 a.m. and doesn’t get back until after 7 at night, seven days a week, and she loves being the mayor,” Goodman said.

He then referred to her chemotherapy treatment.

“Thank God for medicine today and her strength. She beat it. She beat it. She’s a tough, tough, tough lady. She is as tough as it gets … If I were in a foxhole I would want her with me, because she would be able to shoot better than anyone, and use a bayonet if she ran out of bullets.”

When Carolyn Goodman terms out, she and Oscar will have spent a quarter of a century as mayors of Las Vegas (this has become one of Oscar’s favorite statistics).

I asked what the couple has planned after she leaves office.

“We have a little place in Coronado (California), and when we’re there we play the Lotto,” Goodman said. “If we win, and I’m talking about millions of dollars, life would not be any different. It’s like one of my old clients, Tony Spilotro, used to say, ‘You can only eat one steak at a time.’

“If you do that, you’re never envious, and never in anybody else’s pocket.”