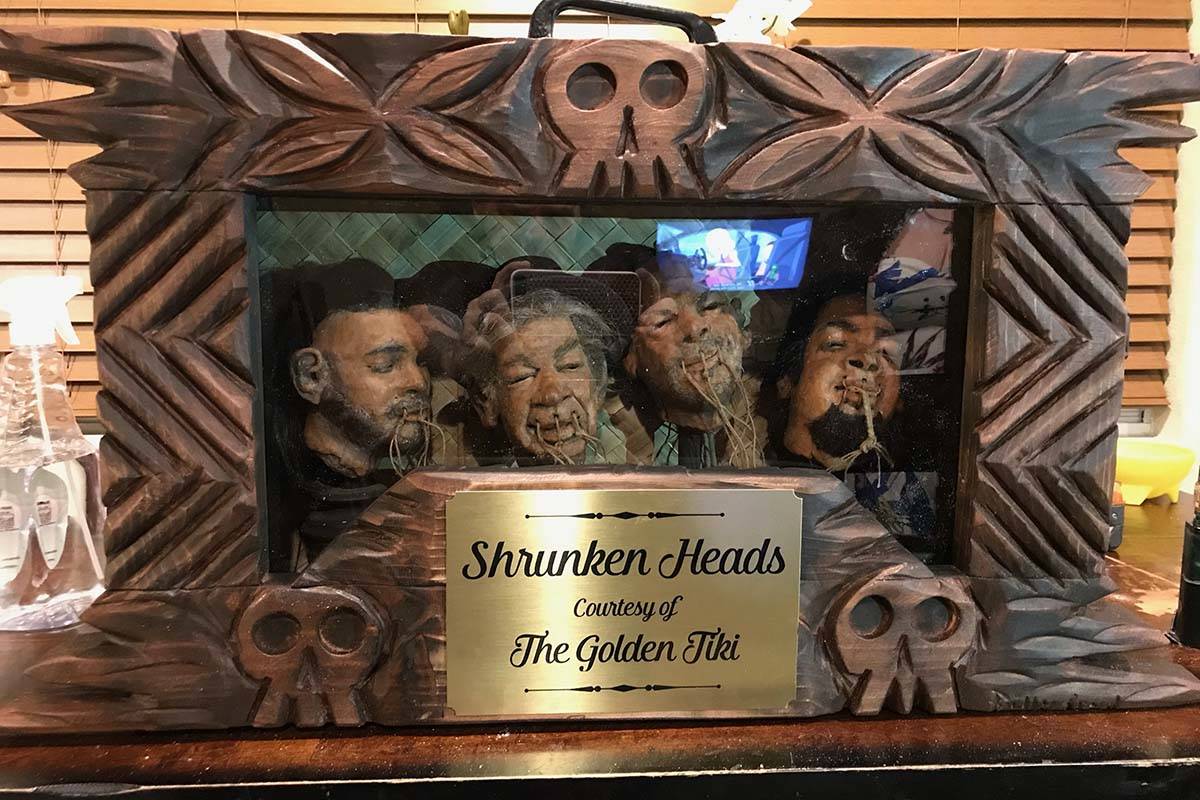 A case created by Vegas wood-carving artist "Billy The Crud" is shown with the "Pawn Stars" shrunken heads after a filming of the History show at The Golden Tiki on Friday, Dec. 18, 2020. (Branden Powers) 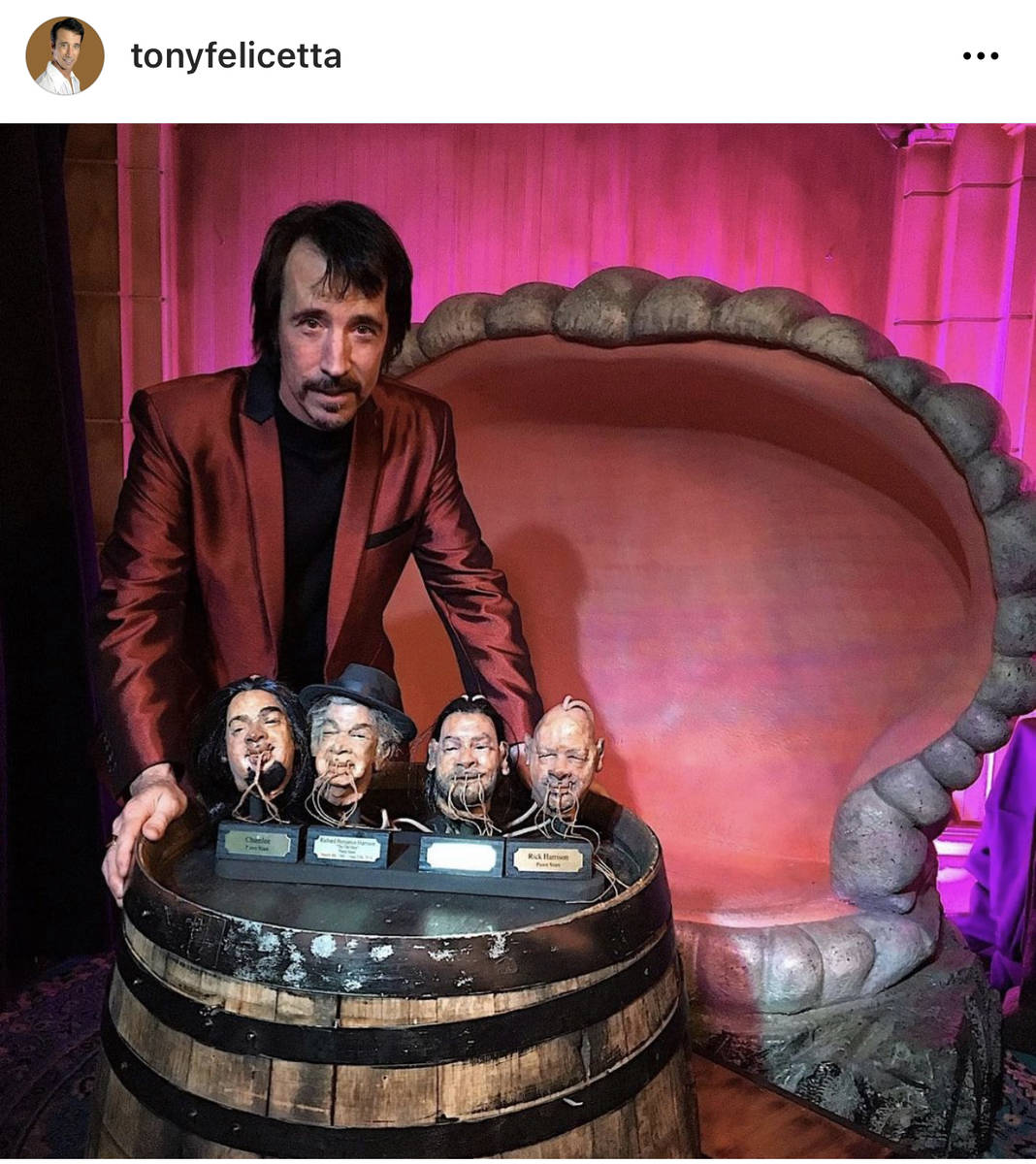 Vegas entertainer Tony Felicetta is shown with the "Pawn Stars" shrunken heads after a filming of the History show at The Golden Tiki on Friday, Dec. 18, 2020. (@TonyFelicetta Instagram) 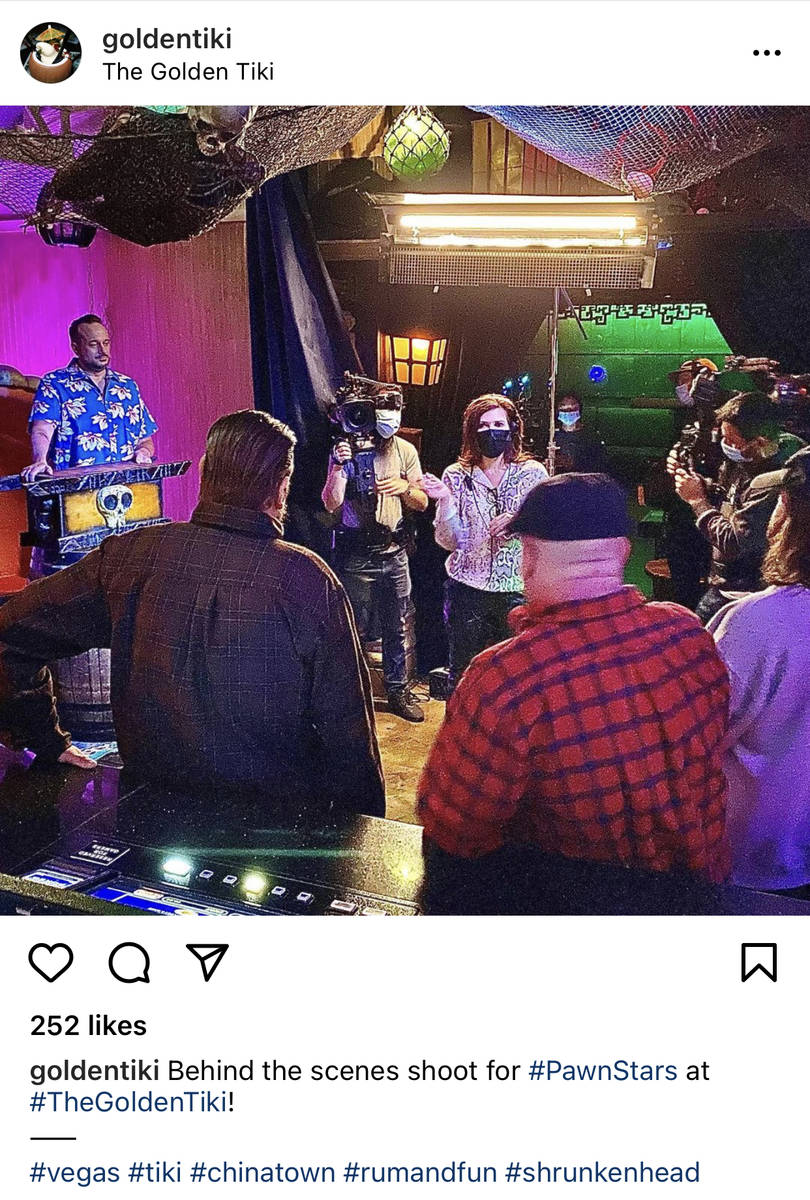 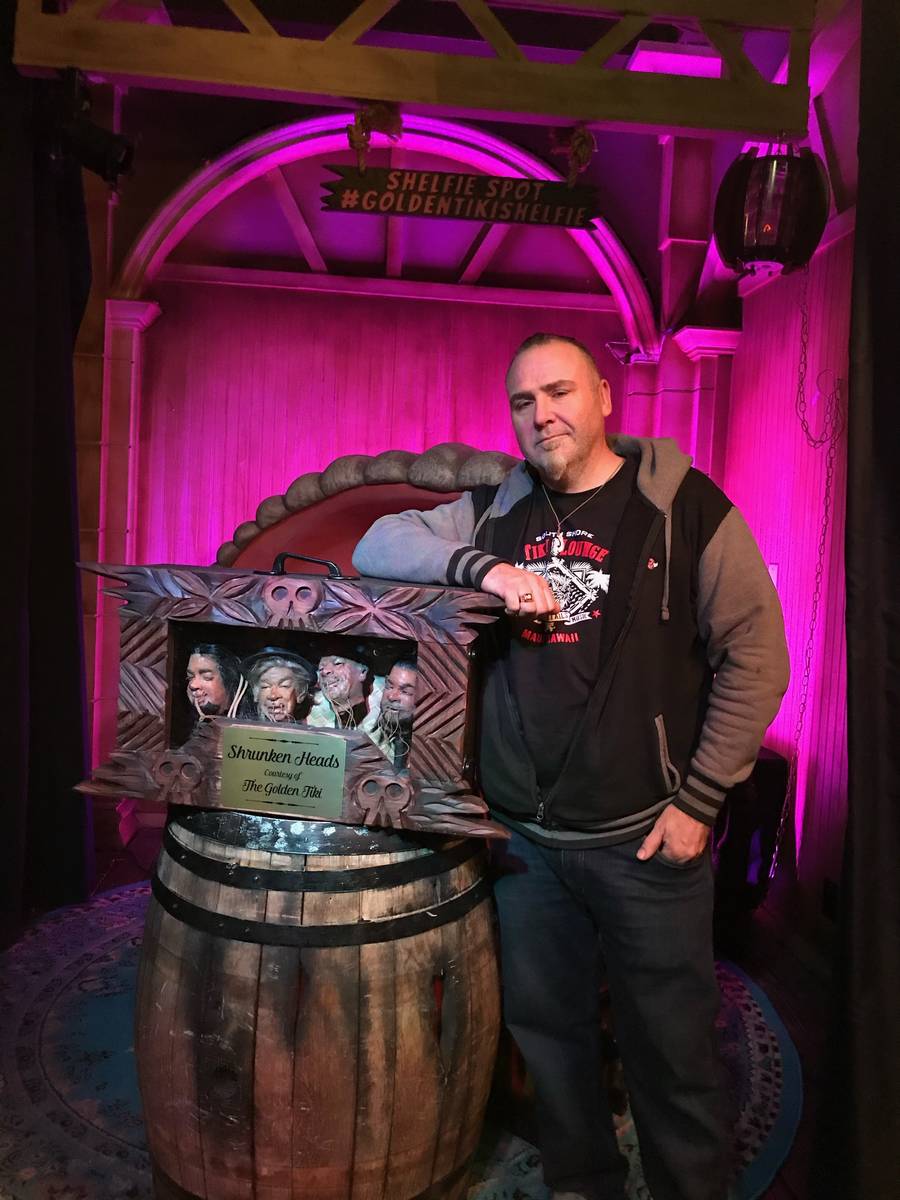 Vegas wood-carving artist "Billy The Crud" is shown with the "Pawn Stars" shrunken heads after a filming of the History show at The Golden Tiki on Friday, Dec. 18, 2020. (Branden Powers)

The original “Pawn Stars,” and their tiny heads, are the focus of an upcoming episode of “Pawn Stars” set at The Golden Tiki. The series stars have long been depicted as shrunken heads at the Chinatown nightspot.

Now the lineup is to be featured on the History series in an episode airing next spring or summer. The scene includes the shrunken heads of series favorite, the late Richard “Old Man” Harrison, along with Rick Harrison, Austin “Chumlee” Russell and Corey Harrison.

All four of those heads have been on display at The Golden Tiki. On Friday morning, the production crew recorded a “Pawn Stars” shrunken-head ceremony. The scene co-starred club managing partner Branden Powers and also featured Tony Felicetta, a regular performer at the club with The Sharps and also as DJ Tone Def.

Powers said Rick Harrison and Chumlee have visited the club a few times, and were touched that “Old Man” was forever honored on the club’s collection of more than 40 shrunken heads, created by Smithsonian artist Terry Barr.

Powers also ordered a second set of heads, with a case designed by Vegas wood artist “Billy the Crud.” That quartet will be exhibited at Gold & Silver Pawn, the center of the Harrisons’ pawn empire and TV show’s primary set.

Carrot Top, Vince Neil, DJ Ashba, Murray Sawchuck, the late Vinnie Paul, Rich Little, The Gazillionaire from “Absinthe” and yours truly have all been honored with shrunken heads.

“It’s really great to have the ‘Pawn Stars’ in the club, and I had some really awesome conversations with Rick about another project I’m working on now,” Powers said. “Getting on the TV show wasn’t my only motive, but it’s great to have that opportunity, too.”

Cirque du Soliel officials have been emailing sidelined employees in Las Vegas over the past few weeks, saying there is no confirmed date for when the company’s Strip shows will restart, but stressing that the plans are for a phased-in return.

Company president and CEO Daniel Lamarre has stated “O” at Bellagio and “Mystere” at Treasure would be the first to re-assemble, whenever the time comes. The company remains committed to “Love” at Mirage, “MJ One” at Mandalay Bay and “Ka” at MGM Grand. Blue Man Group at Luxor, also remains a living title in the company’s reopening plans.

Revisit classic holiday entertainment from the winter wonderland of downtown Las Vegas with “The Elijah Rock Variety Show Christmas Special.” The performance starring Rock, the multidimensional co-star of “Vegas! The Show,” streams from Notoriety’s Renkus-Heinz Theatre at Neonopolis at 6 p.m. Sunday at elijahrock.com/christmasspecial. Tickets to watch the event online are $25, with a percentage of the proceeds going to A New Day Foundation and St. Jude’s Ranch for Children.

Rock has admirably put several entertainers back onstage, even for a single show. As he says, “Performers need to perform and now, more than ever, people need family entertainment. My goal is to do my part to celebrate talent and spread joy.”