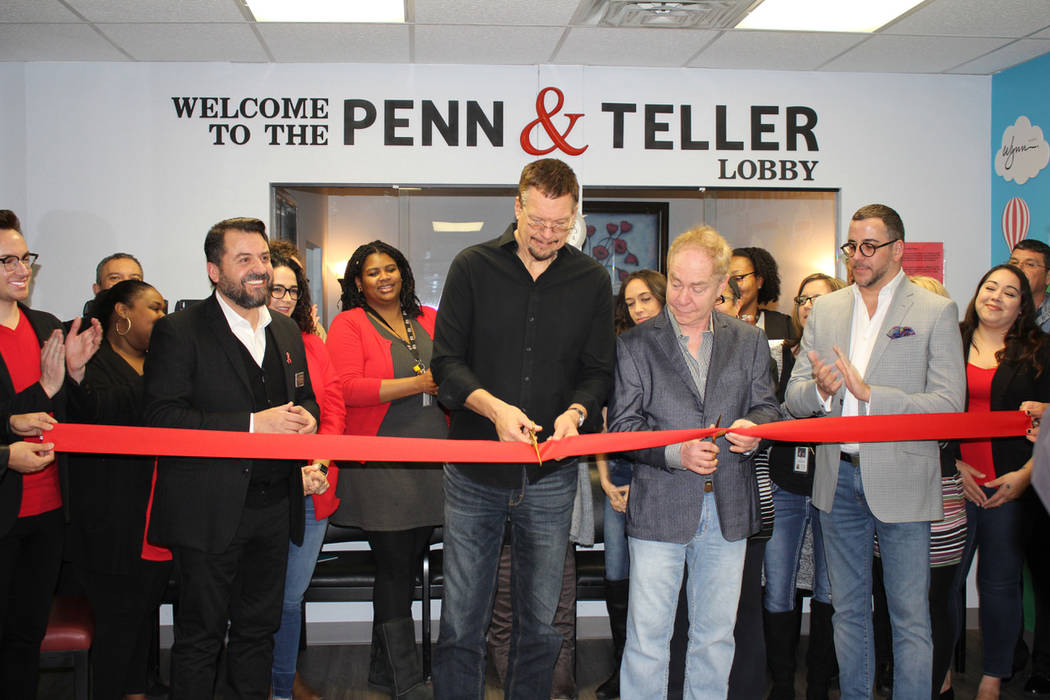 Penn Jillette, left, with Teller, of Penn & Teller cut the ribbon in the lobby of the new AFAN headquarters, Feb. 7, 2019. (Aid for AIDS of Nevada) 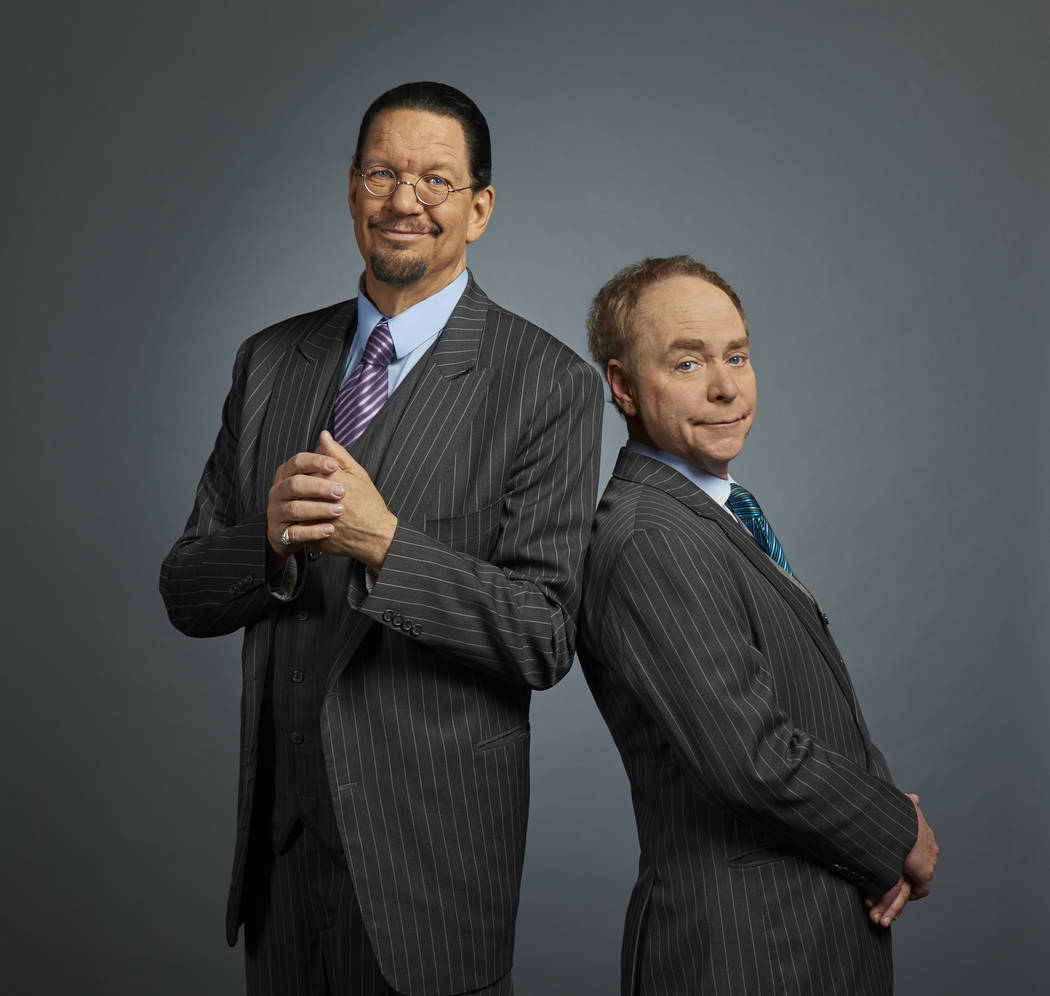 Penn & Teller have appeared in cartoon form on “Scooby-Doo and Guess Who” on the WB Kids network. (Penn & Teller) 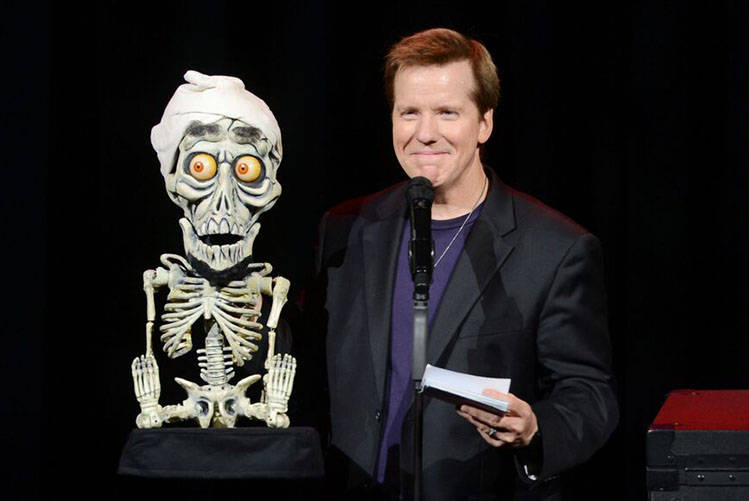 Jeff Dunham appears with his puppet Achmed the Dead Terrorist at The Colosseum at Caesars Palace. Denise Truscello photo) 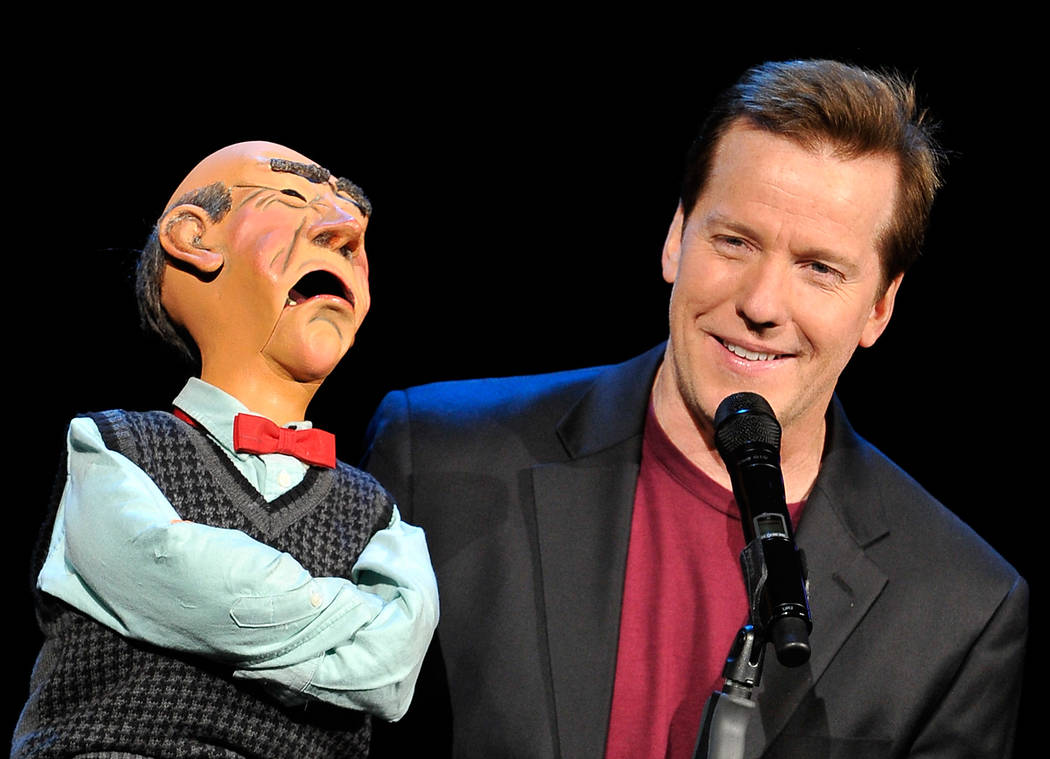 You’ve got to love Penn & Teller. This is the act where you can ask, “What’s new, Scooby-Doo?” and the answer is, “Yes!”

The long-running magic act at the Rio appeared in cartoon form this week on “Scooby-Doo and Guess Who” on the WB Kids network. I confess, I did not know Scooby-Doo was still an active series and hadn’t watched the cartoon since I was a meddling kid. But the series premiered on the Boomerang app in late June and on Cartoon Network on July 8. Keenan Thompson, Wanda Sykes and Ricky Gervais are among the celebs who have voiced the series. P&T are the first Las Vegas headliners to co-star.

In the latest episode, the magic duo visit the haunted Savannah Hotel in Las Vegas (sadly, they do not run into Zak Bagans wielding a black light). Penn’s vocal parts were recorded two years ago at a studio in Las Vegas. As Penn tells the Scooby crew, “Nothing fills us with the joy of life like a little fear!” while Teller runs a handkerchief through Scooby’s ears. Cartoon Penn & Teller would be great spin-off characters.

The Scooby show is just the latest development for the magic team and their manager, Glenn Alai. P&T are backing the play “Magic Goes Wrong,” which performed Tuesday through Saturday at The Lowry in Manchester, England.

The show is from the Mischief Theatre creators of “The Play That Goes Wrong,” which performed at The Smith Center for the Performing Arts in April. “Magic Goes Wrong” co-producers J.J. Abrams and Kevin McCollum are tied to Las Vegas. Both worked with Penn & Teller’s on “Magic Goes Wrong” in Las Vegas, and McCollum is co-producer of the under-development “Goodman: An American Musical,” a tribute to the life of Oscar Goodman.

“Magic Goes Wrong” is a farce where unforeseen mishaps mar a magic act at a charity show (I haven’t seen it, but I hope we have doves diving into a punch bowl). It open for previews Dec. 14 at Vaudeville Theatre in London’s West End, with its premiere set for Jan. 5.

P&T won’t be at the premiere, with a date at Sydney Opera House, and promotional material reminds that they are not actually in the cast. But they will make a charity appearance, supporting their manager, in the following note …

Alai is president of Aids for AIDS of Nevada (AFAN), and Saturday is his first Black & White Party in that role. The 33rd edition of the event moves back to The Joint at the Hard Rock Hotel (it was held at Mandalay Bay’s Daylight Beach Club last year). This event is an annual favorite; never have so many been so colorfully inventive in black and white.

Greg Chase, a Vegas corporate consultant and philanthropist, hosts alongside Mistress of Ceremonies Norma Llyaman. The VIP reception starts at 8 p.m., with the open party at 9 p.m. Set to perform are Brooke Lynn Hytes from “RuPaul’s Drag Race”; Human Nature at The Venetian; and performers from “Celestia” at the Strat, “Chippendales” at the Rio,” “Legends in Concert,” (introduced by a new, newsmaking cast member), “Little Miss Nasty” at the Rio, “Tenors of Rock” at Planet Hollywood, Jen Romas of “Sexxy” at Westgate Las Vegas, “Magic Mike Live” at Hard Rock Hotel (for now) and “Wow — The Vegas Spectacular” at the Rio. Also, “America’s Got Talent” finalist and soon-to-be Cleopatra’s Barge at Caesars Palace headliner Daniel Emmet is performing at the VIP party and open event.

As usual, the event is lined with food and beverage stations. AFAN is raising funds for health services and support for those affected by AIDS/HIV in Southern Nevada. Though Black & White is in its 33rd year, AFAN is celebrating its 35th anniversary as an organization. Tickets start at $35 and can be purchased at afanlv.org. Guests must be 21 or older and, as the organization reminds, “are encouraged to wear as much black and white as they want, or as little as they can get away with!” The post-party is at Piranha Nightclub, where the same rules apply.

Pin-up star and burlesque performer Sabina Kelley is performing at 11 p.m. Friday at Club 101 (formerly The Sayers Club) at SLS Las Vegas (soon to be the Sahara). The show is directed by Anne Martinez, so it will kill, but other specifics are being zipped up.

Kelley has performed in “Jubilee!” at Bally’s, “Pin Up” at The Strat and, most recently, “Ester Goldberg’s Totally Outrageous Brunch” in that same SLS venue. She will remain the most punk rock-styled performer ever cast in “Jubilee!”

My wrap of the Westgate hotel’s four-tier, 50th-anniversary party Saturday night should have included Mark OToole and his backing band performing at the VIP dinner gala. We always try to shine a light on the dedicated artists who perform at such events, and also around the VegasVille entertainment scene, which leads us to …

Catch OToole at International Bar (IBar in shorthand) at Westgate, 7:30 p.m.-1 a.m. on Aug. 24. The lounge is open to the right of the hotel’s main entrance. He returns to the venue Oct. 12-25 and Nov. 2, 15 and 30. The music carries from the open lounge across the casino. No cover charge; the music and dancing are free, and the vibe is real.

Dwayne Johnson, commonly known as “The Rock,” re-tweeted Fox 5’s Rachel Smith’s post from her “Best Buddy” Michelle Desrochers’ review of “Hobbs & Shaw” on Tuesday. Smith and Desrochers met through the Las Vegas chapter of Best Buddies, which pairs those with special needs with Las Vegans who are looking for a buddy to hang with at movies and events and such.

Aww love this Rachel. Thanks for sharing. Thank you Michelle for the love! Love u back and we are going to make that Jason Stumptom guy (whatever his name is) very jelly.
Glad you loved the movie honey
🙏🏾❤️. @HobbsAndShaw https://t.co/eMBdGpI5vq

Smith posted a clip of Desrochers saying, “I think that Dwayne Johnson, ‘The Rock,’ is a hunk. Jason Statham, he’s cute. But cuter is ‘The Rock.’ I hope you’re listening to this, ‘The Rock.’ I love you! You have the guns!”

Johnson caught Smith’s post and replied, “Aww love this Rachel. Thanks for Sharing. Thank you Michelle for the love. Love u back and we are going to make that Jason Stumptom guy (whatever his name is) very jelly.”

Ventriloquial star Jeff Dunham at The Colosseum at Caesars Palace. He’s back again, Nov. 3, bantering with his fan favorites Peanut, Walter, José Jalapeño, Bubba J. and Achmed the Terrorist. Tickets are on sale at jeffdunham.com. Dunham releases his new Netflix special, “Jeff Dunham: Beside Himself,” in September.

The special was recorded for a crowd of 16,000 at American Airlines Center in his hometown of Dallas where Dunham debuted “Larry,” personal advisor to the president. That figure is on the tour, too. Maybe we’ll see a summit between puppet Larry and Terry Fator’s puppet Donald Trump, and I’m sort of in disbelief that I just wrote that sentence …