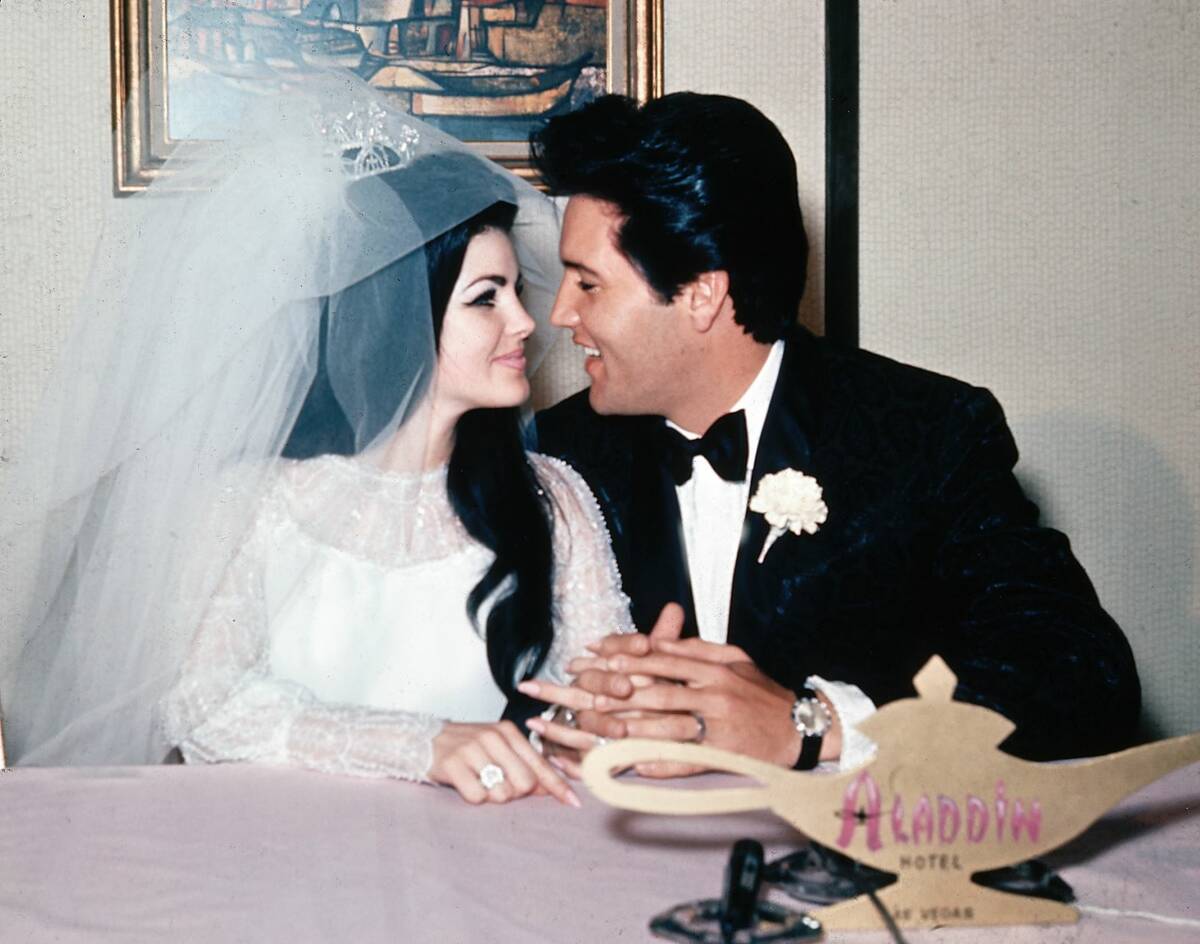 Elvis Presley and his bride, the former Priscilla Beaulieu, are shown at the Aladdin Hotel in Las Vegas after their wedding on May 1, 1967. Presley, 32, and Beaulieu, 21, both from Memphis, Tenn., met while he was stationed in Germany with the U.S. Army. (AP Photo) 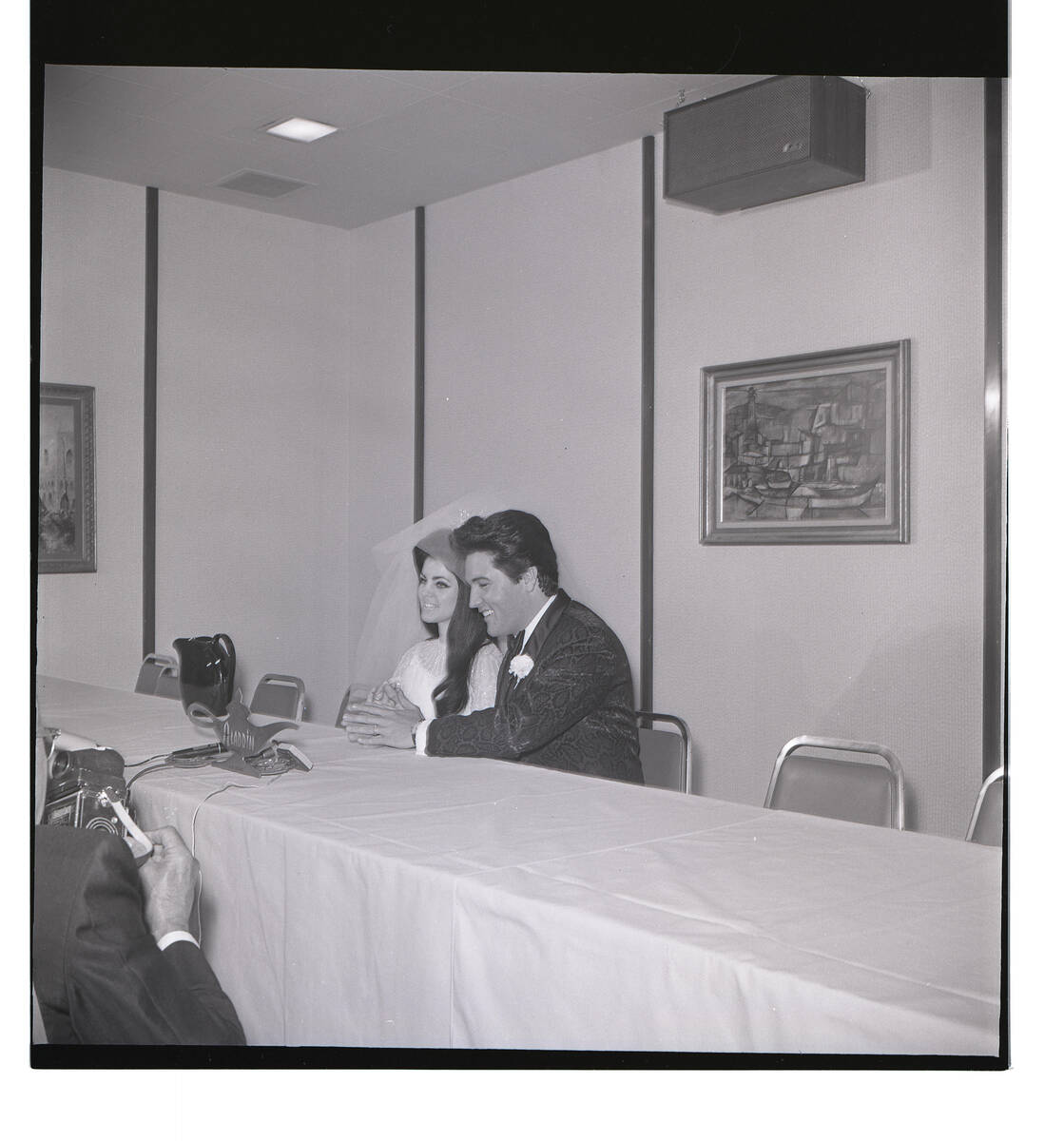 Elvis and Priscilla Presley's wedding day at the Aladdin Hotel in Las Vegas on May 1, 1967. (Las Vegas Review-Journal, file)

Priscilla Presley has a wedding history in Las Vegas. She and Elvis were legendarily married at the Aladdin on May 1, 1967, two years before he premiered at the International Hotel.

On Saturday, Presley said she is supporting a different type of Vegas union: Authentic Brands Group’s efforts to team with the city’s Elvis-themed chapels to preserve her late husband’s image.

In a text message, Presley said of the emerging partnerships, “This is a good thing.”

Though ABG purchased controlling interest in Elvis Presley Enterprises in 2013, Lisa Marie Presley (who still owns 15 percent of the company) remains a consultant on all Elvis decisions.

“ABG is the guardian of the Elvis Presley legacy, as is the family. They and the family are committed to protecting it for generations to come,” Priscilla Presley said. “ABG is sorry that recent communication with a small number of Las Vegas-based chapels caused confusion and concern. That was never ABG’s intention.”

Presley then returned to ABG’s comment that the company and chapels will “ensure that the usage of Elvis’ name, image and likeness are in keeping with his legacy. Elvis is embedded into the fabric of Las Vegas, and ABG embraces and celebrate Elvis fandom.”

“I have been very upset by what this could mean to our marriage business in Las Vegas,” Goodman said in a phone chat. “I feel this company couldn’t care less about the impact this can have on our city.”

Goodman also emphasized she had no ill feelings toward the Presley family.

“I have been here through all of Elvis’s time in Las Vegas, from ‘Viva Las Vegas,’ their wedding, his shows at the International and Las Vegas Hilton,” Goodman says. “I have great admiration for Elvis, for Priscilla and Lisa Marie. Elvis in so many ways is Las Vegas, and this has nothing to do with his family.”

On May 19, ABG had warned wedding chapels in Las Vegas that were using Elvis’s name and likeness in its marketing, branding and ceremonies they might be sued for intellectual copyright infringement. But over the past week, that stance has shifted to the company offering licensing partnerships for what seems a reasonable annual fee (less than $1,000, reportedly). ABG has also invited chapel owners tickets to a screening of the Baz Luhrmann biopic “Elvis,” due for release June 24.

A few weeks ago I happened into City Hall and noticed a framed photo of a famous Las Vegan, Jesse Garon.

Garon has been named the city of Las Vegas Citizen of the Month for May. He’s better recognized as the city’s go-to Elvis impressionist. “I guess May was my month,” says Garon, who has been contacted by myriad media outlets covering the licensing story.

Garon has taken on many official city of Las Vegas duties (Helldorado Days parade, the Great Santa Run among them). He has taken on the name of Presley’s twin brother, Jesse Garon Presley, who passed away at birth.

Taking up the area

As anticipated, the AMG Technology convention booked Area15 for a lavish 25th anniversary party Saturday afternoon. The company took over the main Area15 building with Omega Mart, Museum Fiasco and Wink World; and also the new, adjacent Illuminarium projection exhibit building. Those familiar with what that would cost report it is more than $1 million. AMG is a major player in the software industry.

COVID is still a concern among Las Vegas productions. Golden Rainbow’s “Ribbon of Life” has moved its 34th annual showcase at Legends in Concert Theater at the Tropicana from June 26 to Dec. 4. It’s now being planned as a holiday show, with Edie of the “Faaabulous” drag show and brunch at Notoriety Live, and Sean McAllister of Vegas Revealed podcast back to co-host.

Organizers say COVID concerns led to the decision. “As a leading organization that addresses the needs of individuals with compromised immune systems, Golden Rainbow couldn’t in good conscience move forward with an event that could potentially place their community at additional risk.” This decision does not affect the shows currently performing at the venue, “Legendary Divas,” “MJ Live” and the Purple Reign tribute to Prince.

Ticket information and other details are to be announced.

The Beatles and the Vegas Casino K9 Foundation are in the spotlight at the next Monday’s Dark at The Space. The theme is “We Want To Hold Your Hand,” especially if it is holding a $20 spot for the nonprofit that supports the casino and resort K9 security operations. The K9 provides financial assistance for veterinary care and prescriptions, along with assisting with food and other needs, to ensure the canines a long and healthy retirement after their years of service.

Hopefully someone has dialed up “Hey Bulldog” for this one. Showtime is 8 p.m., additional intel is at mondaysdark.com.