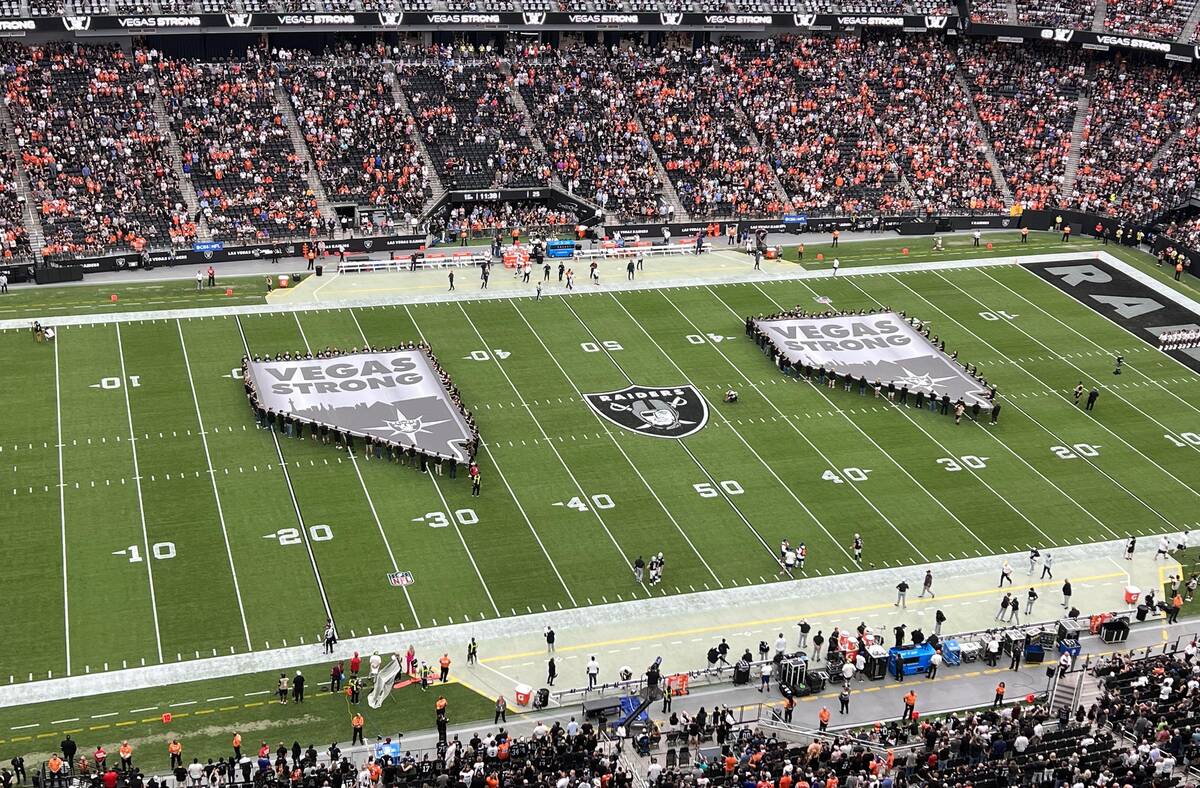 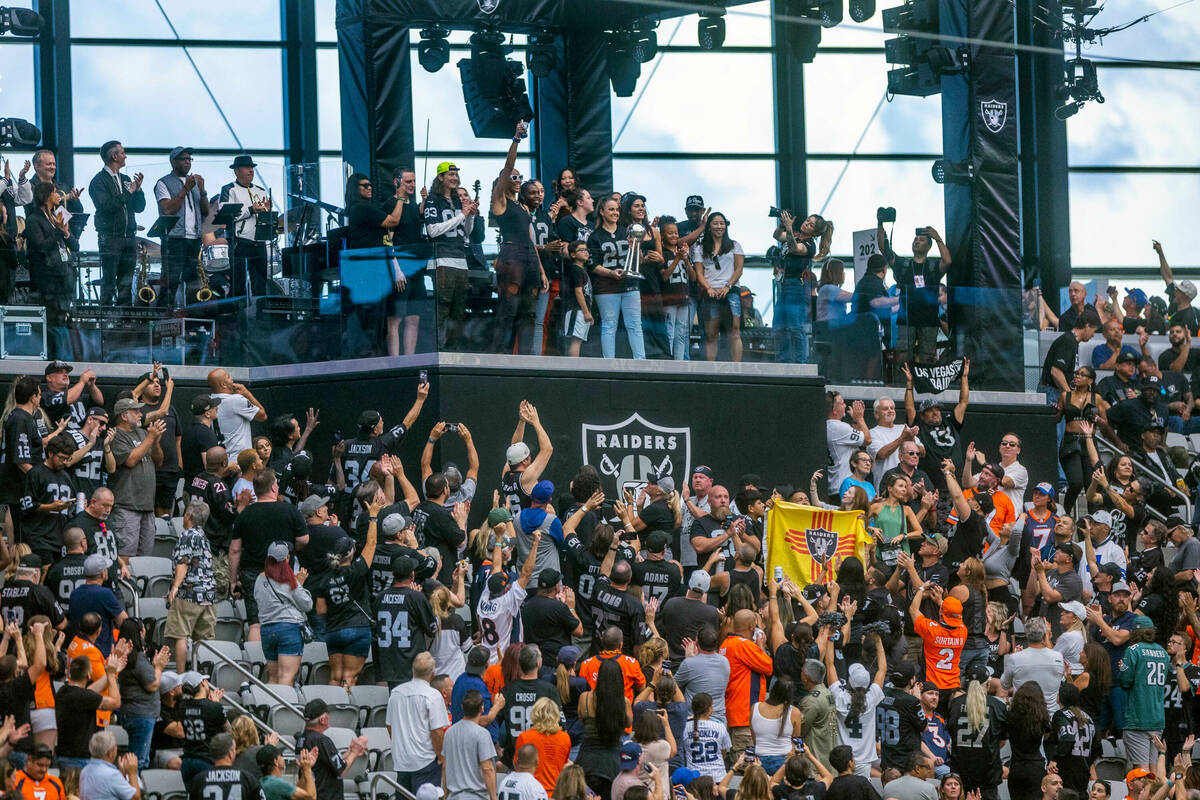 The Las Vegas Aces are celebrated and light the torch at the start of the first half of their NFL game at Allegiant Stadium on Sunday, Oct. 2, 2022, in Las Vegas. (L.E. Baskow/Las Vegas Review-Journal) @Left_Eye_Images 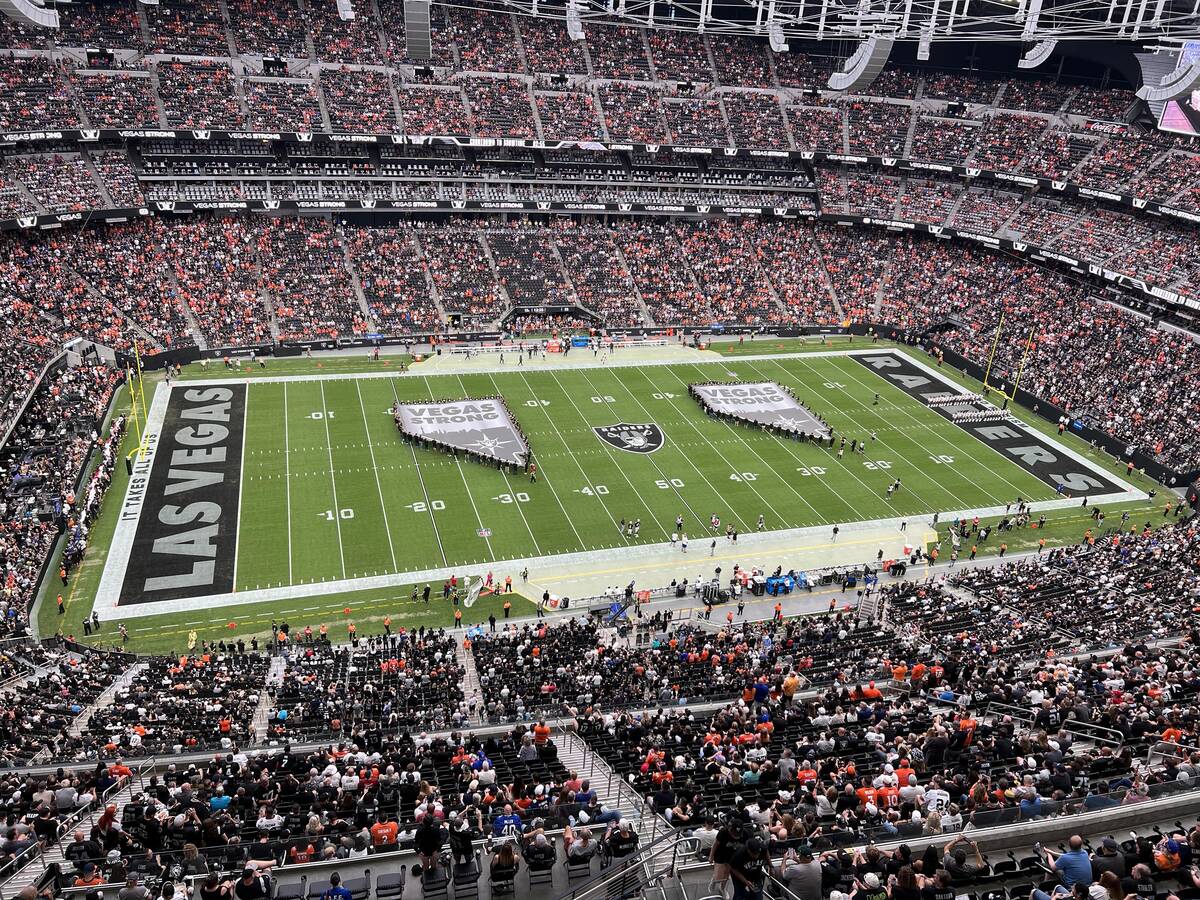 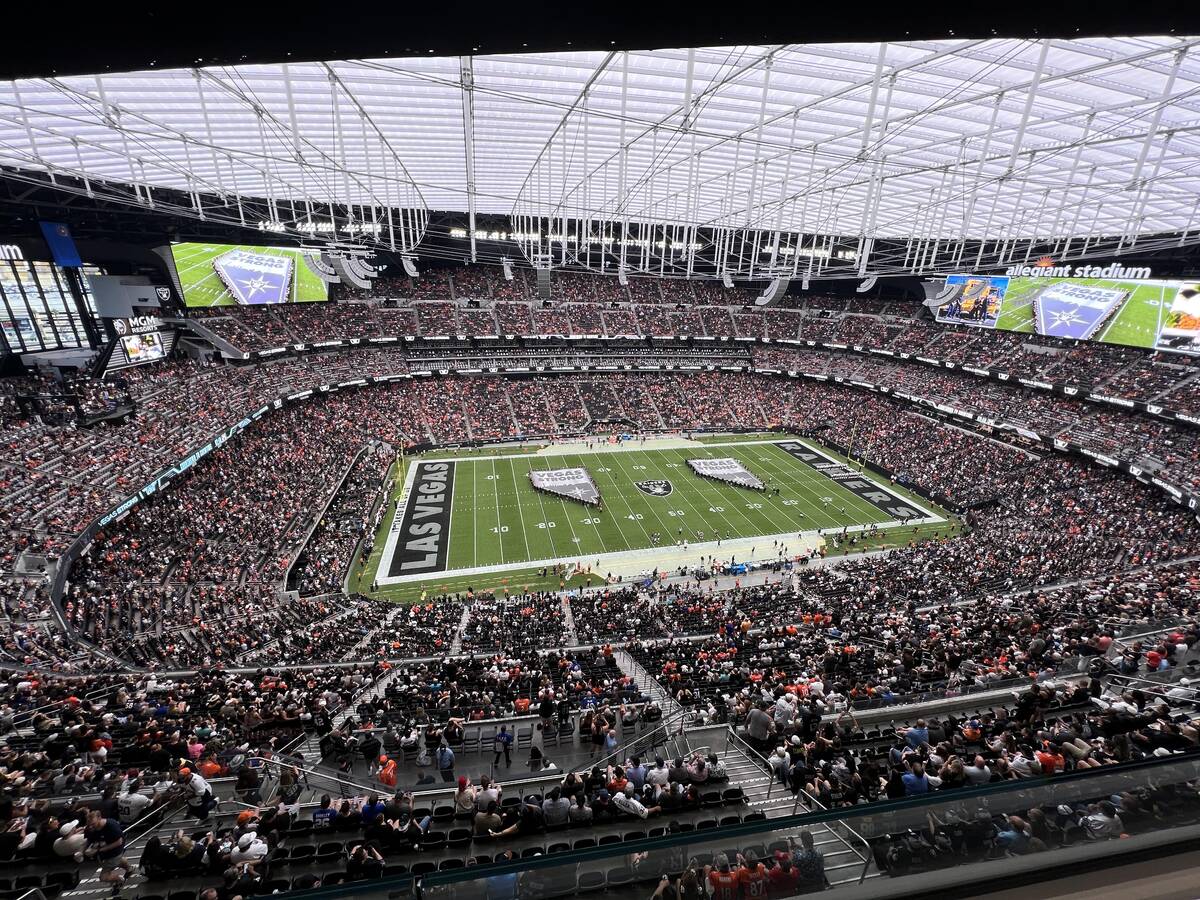 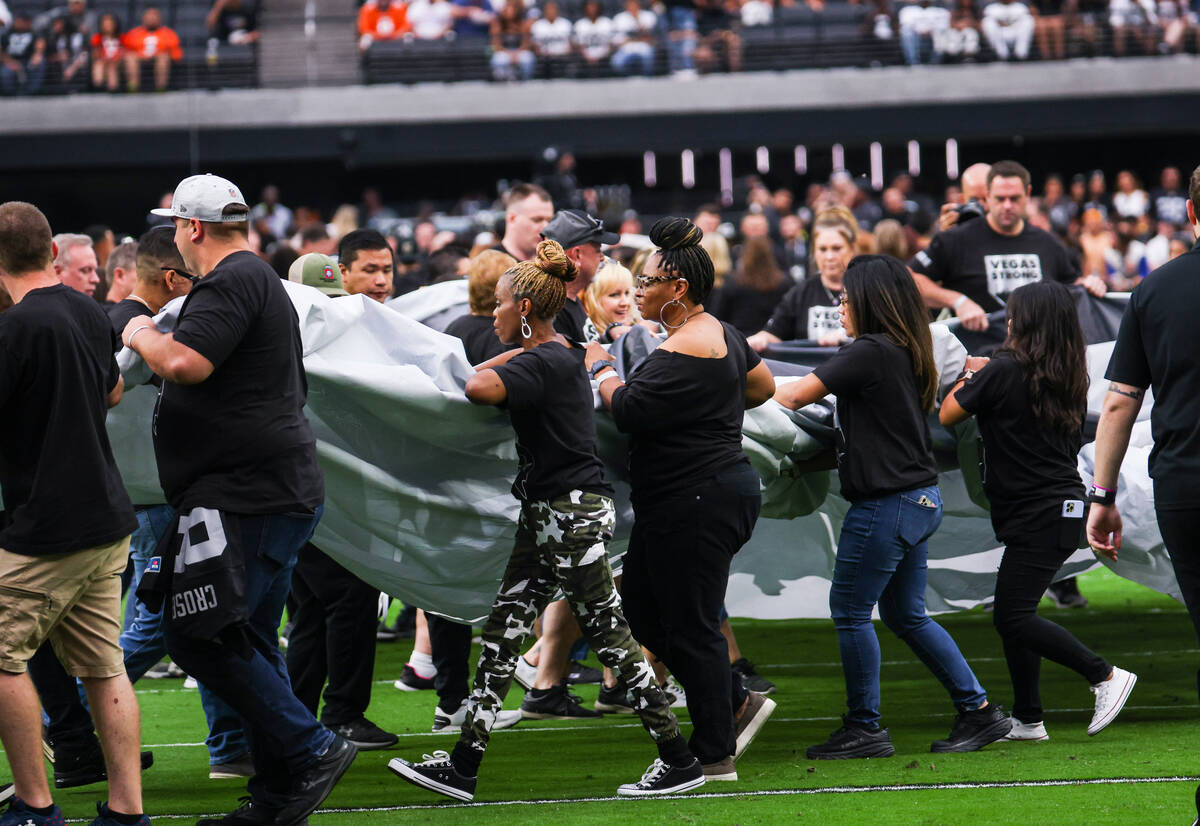 People carry out a Vegas Strong flag before the start of an NFL game between the Raiders and Denver Broncos at at Allegiant Stadium on Sunday, Oct. 2, 2022, in Las Vegas. (Chase Stevens/Las Vegas Review-Journal) @csstevensphoto 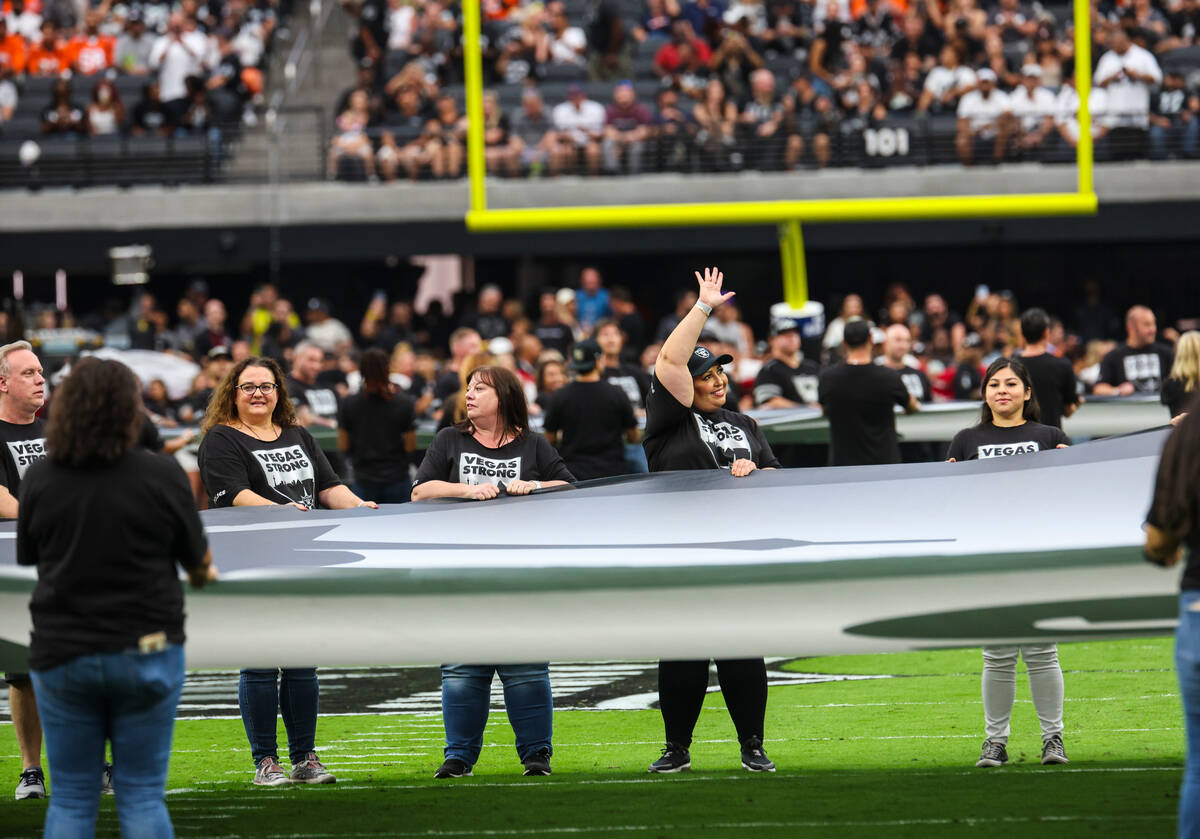 People carry out a Vegas Strong flag before the start of an NFL game between the Raiders and Denver Broncos at at Allegiant Stadium on Sunday, Oct. 2, 2022, in Las Vegas. (Chase Stevens/Las Vegas Review-Journal) @csstevensphoto

The Kats! Bureau at this writing is The Perch at Allegiant Stadium. The Raiders put on a remarkable pregame event by honoring the Oct. 1 victims and their families. Two-hundred first responders took part in an on-field display, with two Vegas Strong images unfurled across the field.

Judith Hill returned to our city to perform “Rise Up,” on piano and backed by David Perrico and the Raiders House Band. Hill also performed the song at the groundbreaking of Allegiant Stadium in November 2017. Brilliant then, and again Sunday.

The Las Vegas Aces reconvened to light the Al Davis Memorial Torch. The Raiders and Aces, led by owner Mark Davis, have shown a sense of community throughout their tenures in Las Vegas. Sunday was no exception.

Former Eagles member Don Felder and fellow guitar virtuoso Orianthi performed the halftime show. Felder has co-headlined with Styx, at The Venetian. He once taught me a “power cord” backstage. Seriously.

“Already Gone,” and “Hotel California” highlighted the set. They could have changed the lyric to “Hotel Colorado,” for all the Bronco orange in the stadium.

Orianthi became famous after rehearsing for Michael Jackson’s “This is It” live series planned for O2 Arena at the time of his death. She has also backed Carrie Underwood at the 2009 Grammy Awards show (we expect Underwood is coming back to her Resorts World residency next year) and Alice Cooper (playing the Dollar Loan Center on Saturday). She is a wicked talent and, as such, rocked the place.

Lambert in the moment

Country superstar and Zappos Theater headliner Miranda Lambert presented all of the victims’ names on the LED screen of her show on Saturday night. She and her band and crew also took part in the Vegas Strong 5K/1-mile run in downtown Las Vegas.

Lambert showed off a new “fire jacket” on Instagram. We expect (and hope) this is for her “Velvet Rodeo” stage show. The piece is designed by Idyllwind. Lambert looks like she might actually fly in this thing.

And, Lambert is scheduled to perform Tuesday on “Jimmy Kimmel Live.”

On the topic of Kimmel …

How about a return?

Jimmy Kimmel finished another week of taping in Brooklyn, where he grew up before moving to Las Vegas at age 9. The shows were staged at Brooklyn Academy of Music’s Howard Gilman Opera House (“BAM” in shorthand).

This was Kimmel’s sixth visit to his former home borough. He’s recorded once in Las Vegas, in April 2019 at Zappos Theater. Not to keep score, but Vegas is losing the Kimmel Homecoming Derby.

But don’t take it personally. These decisions are weighed by cost-effectiveness and ratings (are the ratings high enough to merit taking the show on the road).

These are unalike destinations, of course. The difference between airing the show out of Brooklyn and Vegas is: In Brooklyn, Kimmel tooled around in a bookmobile, and sidekick Guillermo Rodriguez dressed as a big apple. In Vegas, Kimmel and his crew (including Guillermo, Aunt Chippy and Cousin Sal) flew on the Linq zipline, and Guillermo danced with the Chippendales.

We hope Kimmel returns, soon and often, for whatever reason. I wish there were better news out of Jimmy Kimmel’s Comedy Club at the Linq Promenade, which remains closed to the public until further notice. Only private and corporate events, same condition as when it went dark in March 2020. But when Kimmel is here, I’m there. Count on it.

Frankie Scinta at South Point Showroom. The Vegas (and column) favorite sold out both shows over the weekend.

Not a lot of lead time

Superstar stunt artist and magician David Blaine gave the actor Ed Norton scant notice for Norton’s appearance in Blaine’s opener at The Theatre at Resorts World on Friday. “In the 25 years I’ve known David, one of my favorite things about being friends with him is you never know exactly what is going to happen at any given moment,” Norton said from the stage. “Like, he might come up to you, 20 minutes before the show in Las Vegas and say, ‘Would you be the emcee onstage for my breath-hold?’” So Norton had his first unbilled appearance ever on the Strip.

Dr. Dre and Eminem dined Friday night at Delilah. Together. But they did not take the stage.

Flavor Flav and Rob Gronkowski cut a clip together on the @flavorflavofficial Instagram page, from Shaquille O’Neal’s charity gala The Event at MGM Grand Garden.

Somehow social media didn’t collapse from the power of this duo.

And the time on Flav’s clock/necklace read 8:20 p.m., and that was right on the money.

The party bands Sportive Tricks and Tipsy McCracken & Bawdy O’Dare perform Friday at, where? Where, kids? The Age of Chivalry Renaissance Festival on Fiddler’s Green at Sunset Park. Sportive Tricks is 11:30 a.m., 1 p.m. and 2 p.m. McCracken/O’dare are at 6:45 p.m. and 8:15 p.m. Tickets to the Festival are $15 for adults and $8 for kids and seniors if you go to LVRenFair.com. The music is included in the ticket price.