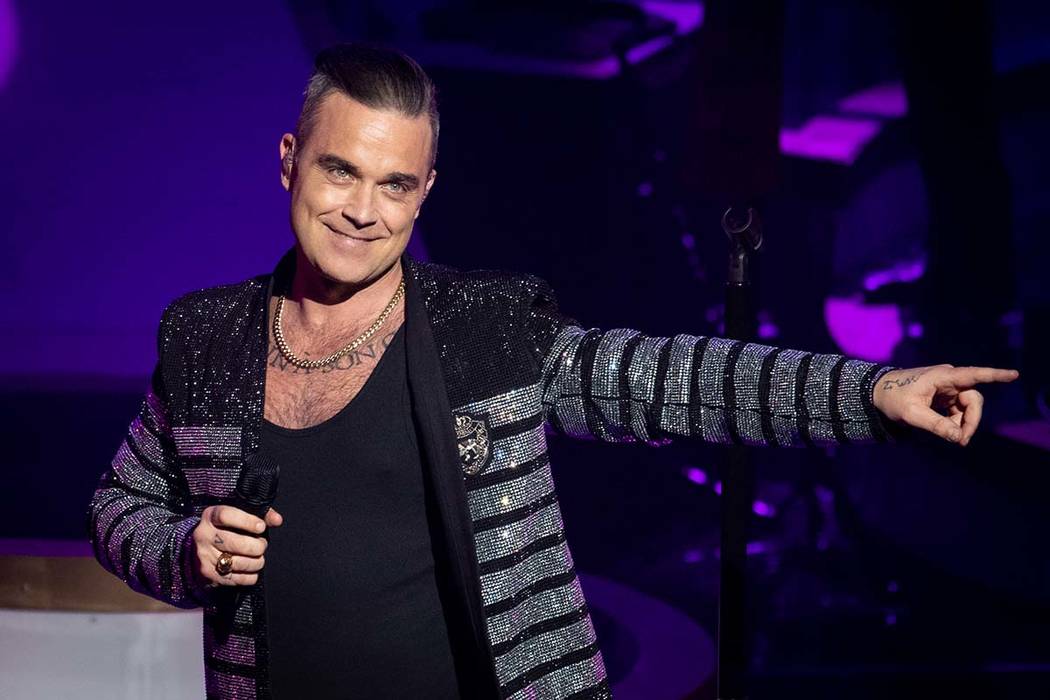 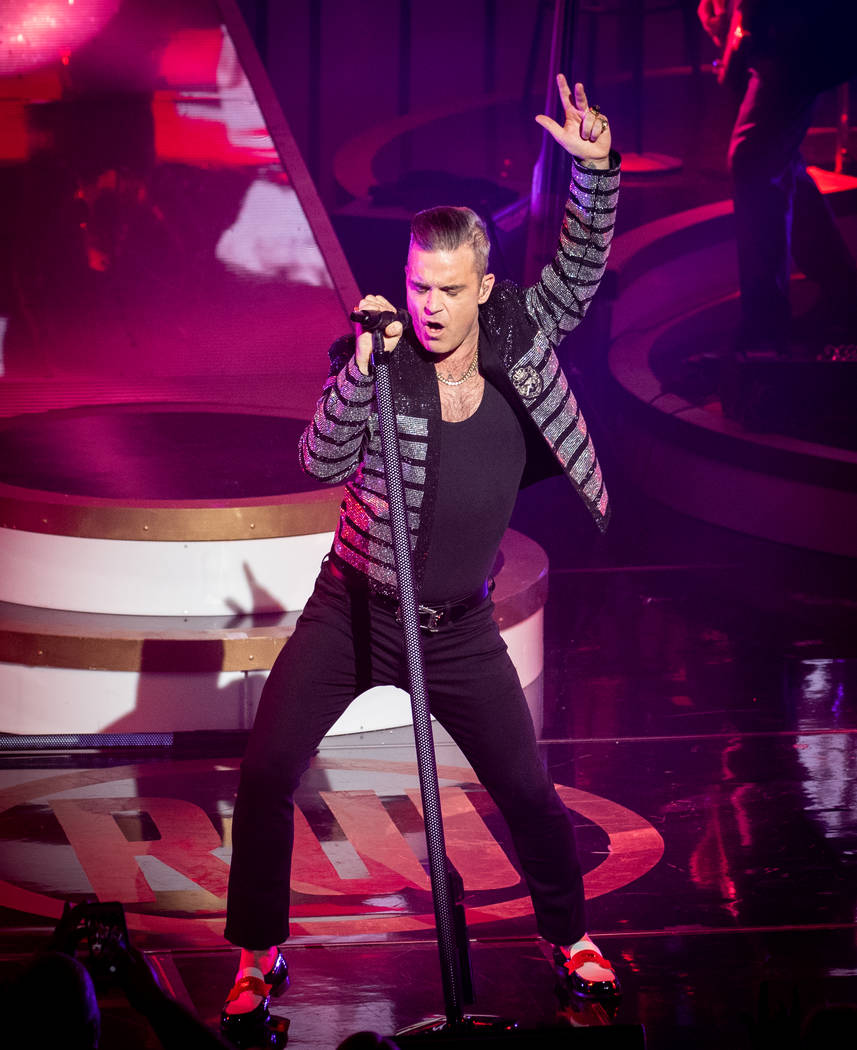 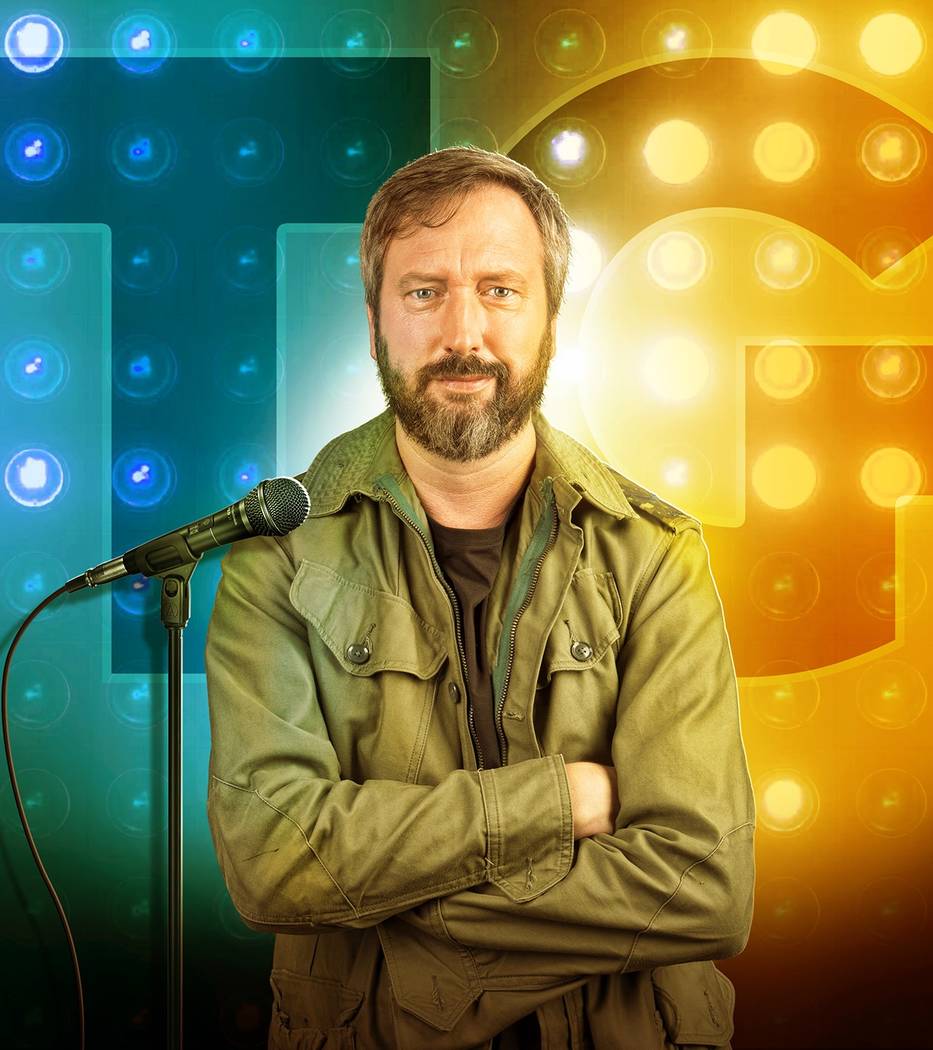 Tom Green is among the headliners in the new comedy series at the Plaza Showroom. (Plaza) 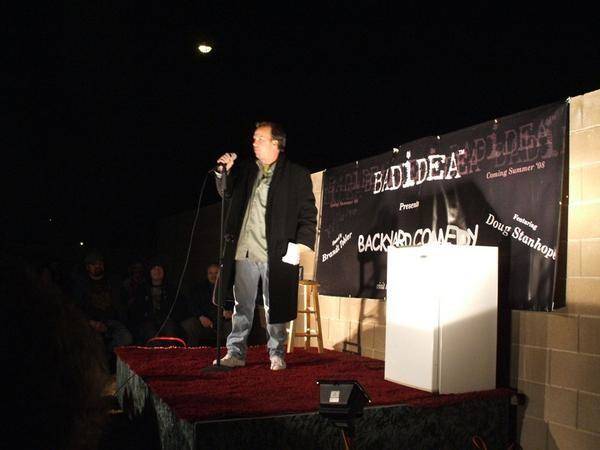 Doug Stanhope, shown performing in the Henderson backyard of comedian Brandt Tobler in 2017, has sold out the Plaza Showroom and been banned from Caesars Entertainment properties in 2019. (Brandt Tobler) 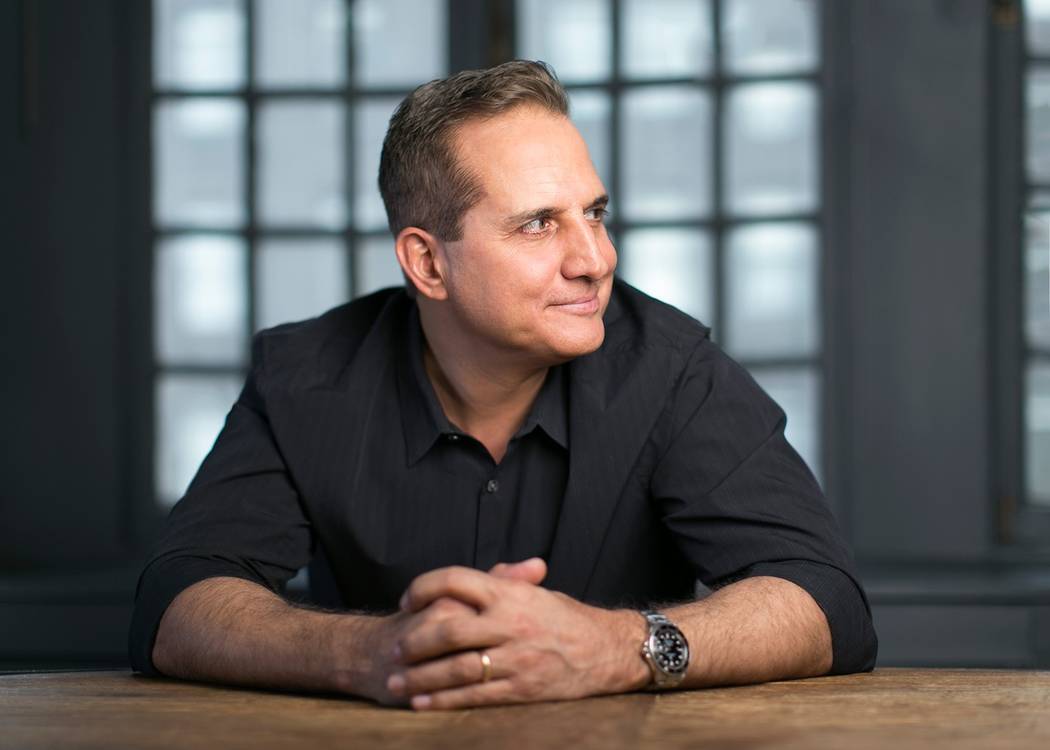 Nick Di Paolo is among the headliners in the new comedy series at the Plaza Showroom. (Plaza)

The Kats! Bureau at this writing is the sports book at Wynn Las Vegas, where the dulcet tones of horse-racing broadcasters are occasionally interrupted by baseball analysis on the MLB network. Elsewhere around the hotel, I’m eager to hear if there is any merit to the buzz about Robbie Williams’ return to Encore Theater.

Williams did stunning business this spring and summer, his show a buoyant blast of such Las Vegas inspirations as Liberace, Elvis, Cirque, “Jubilee!” and Sinatra. During his finale at the Wynn on July 6, the infectious showman shouted, “See you next year!” So, something’s up.

After that closing performance, Williams again proved his appeal across the pond by playing for 65,000 delirious fans at the British Summer Time festival at Hyde Park on July 14. He performed essentially the same show he uncorked on the Strip.

Evidently, Williams wants to return to Encore Theater, but also wants more money. I say, pay him and set the on-sale date.

Plaza does the funny

Plaza is hosting a new comedy series in its classic showroom beginning next month. The Comedy Works is delivering this recurring lineup beginning Sept. 12-14 with Jim Florentine (“The Metal Show” on VH1). Kevin Downey follows Sept. 19-21, then its Nick Di Paolo (Sept 26-28), Tom Green (Oct. 10-12) and a showcase titled, “Fat Chance: An Evening of Conversation and Story with Lisa Lampanelli” on Oct. 24-26. Ex-“Saturday Night Live” cast member Tim Meadows is booked for Jan. 9-11.

The Comedy Works is under the second-generation ownership of Tommy Nicchi, whose father opened the club in the basement of his deli in Albany, N.Y., in 1981. The lineup is dotted with familiar club vets, and ticket prices start at a sensible $20.

Green, especially, has an extensive history in Las Vegas as a former headliner (with Steve-O) at Vinyl at Hard Rock Hotel, the Back Room at Paris Las Vegas and Harrah’s Showroom in “The Comedy Lineup.”

The Plaza has its own history with stand-up, with mixed results. Bonkerz Comedy Club set up a room at the hotel six years ago and closed after about a year. Louie Anderson headlined the room for a little more than a year ending in March 2016. Neither format held up over time. Not enough customers at the Plaza cared to see club comics in an after-market venue, and those who wanted to see Anderson downtown caught his show early in the run and audiences dwindled.

But Plaza CEO Johnathan Jossel is convinced the funny can fill the room, summoning the three-show series by Doug Stanhope on May 24-25 as evidence.

“Those shows opened our eyes to the kind of comedy we could have in that room,” Jossel said Tuesday in a phone chat. “The energy was great. It just felt right, and it’s our intention to have live comedy in that room every weekend.”

Stanhope has a loyal, hardcore following that snapped up his tickets before any marketing plan to promote his shows was in place. The sharp-edged comedian has also managed to make news across social media over the past few days by posting a letter from Caesars Entertainment explaining that he has been banned from all the company’s properties after he drafted a scathing review of the Rio on Yelp and Trip Advisory.

Stanhope characteristically let his opinions fly with a litany of complaints and a one-star review from his February stay: “The Rio is like being in 1986. By that I mean it’s like you were still driving your 1986 Ford Tempo 33 years later, held together with gaffer’s tape and surgical mesh, riding on the rusted rims.”

Caesars Entertainment officials reminds that they do not ban customers from their hotels simply because of negative online reviews. In his Yelp review, Stanhope says, “On the second night at midnight, my manager showed up drunk at my door like Oscar Madison from the Odd Couple after having a tiff with his galpal.”

As Stanhope writes, that person crashed outside Stanhope’s suite for six hours. It is not known whether that episode at all played in to Stanhope’s banishment. We’d love to know what happened here, as efforts to reach Stanhope through his manager, Brian Hennigan (who might or might not have been the person slumbering in the Rio hallway), have been unsuccessful.

But we do know Jossel wants Stanhope to return to the Plaza. The comic stayed at the hotel during his run in May.

“I would love to have him back. He sold the place out and hung out afterward in our lounge and everyone had a great time him,” the hotel exec said. “We had no issues and he was very nice.”

On the topic of comedy, Chris Distefano is headlining Jimmy Kimmel’s Comedy Club at Linq Promenade this weekend. His weekly series “Stupid Questions with Chris Distefano” has just been extended on Comedy Central, and he also has a new deal with the cable channel for a second hourlong special, animated series and an unscripted series. Distefano took a few questions in email about Vegas, and this is one answer that can be mitigated for a family publication:

“The first time I was ever in Las Vegas, I went to the WSOP (World Series of Poker) with my friend who came in 812th place. Yay. I remember my mom giving me a list of things to do like wear sunscreen and drink plenty of water. I didn’t listen. Instead, I got burned bad at the pool at the Rio and got so hammered one night I did shots of Pepto Bismol mixed with vodka.”

All references to the Rio, we can assure, are purely coincidental …