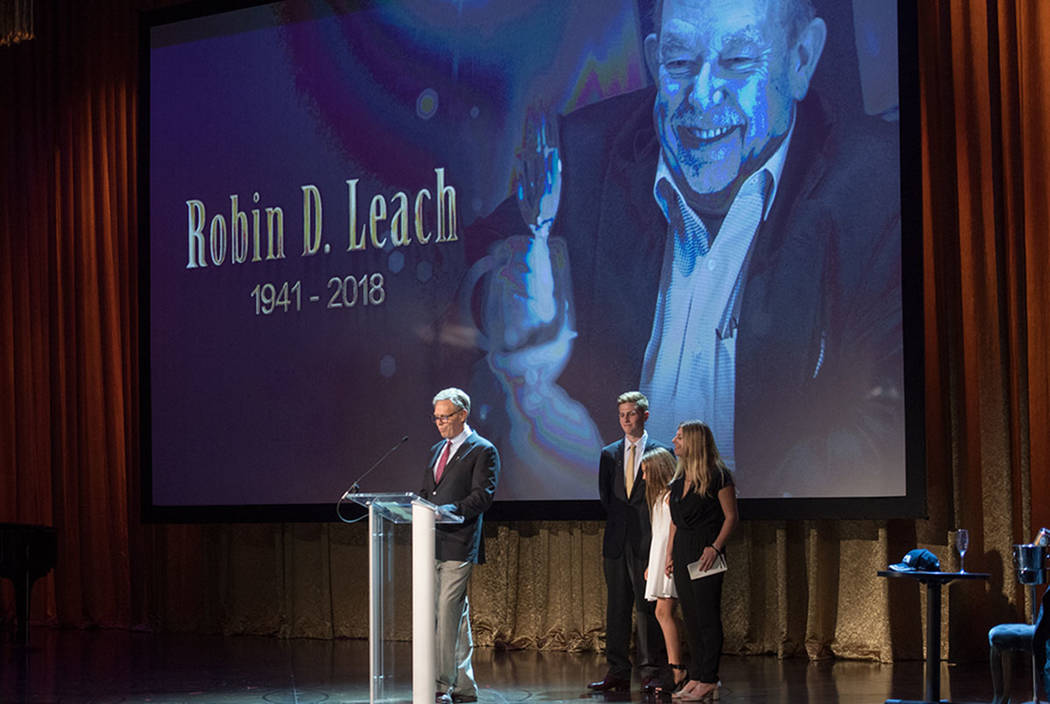 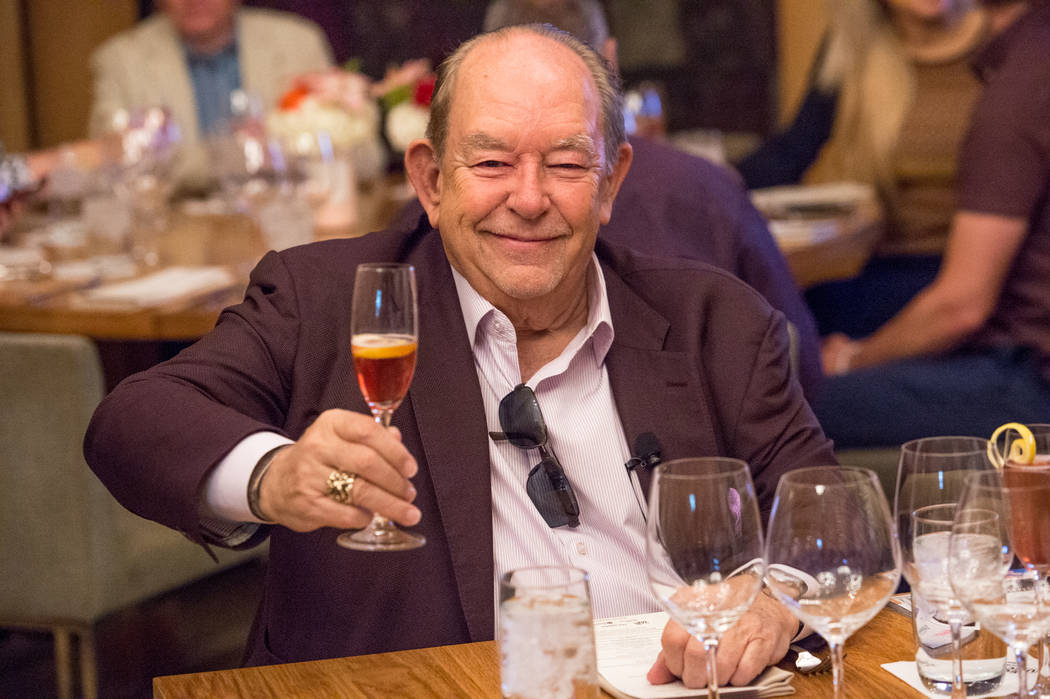 A portrait of Robin Leach is displayed at his celebration of life at Palazzo Theater on Friday, Sept. 28, 2018. (Tom Donoghue) 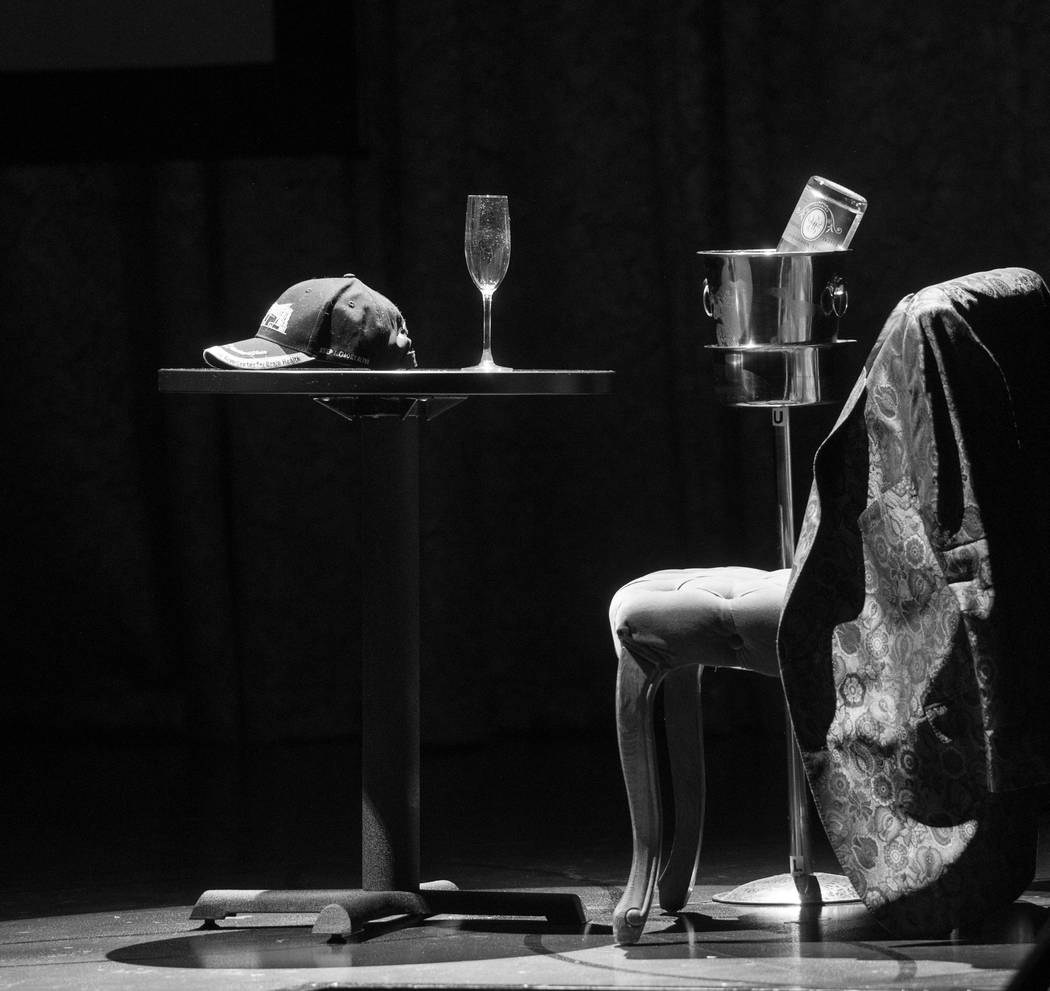 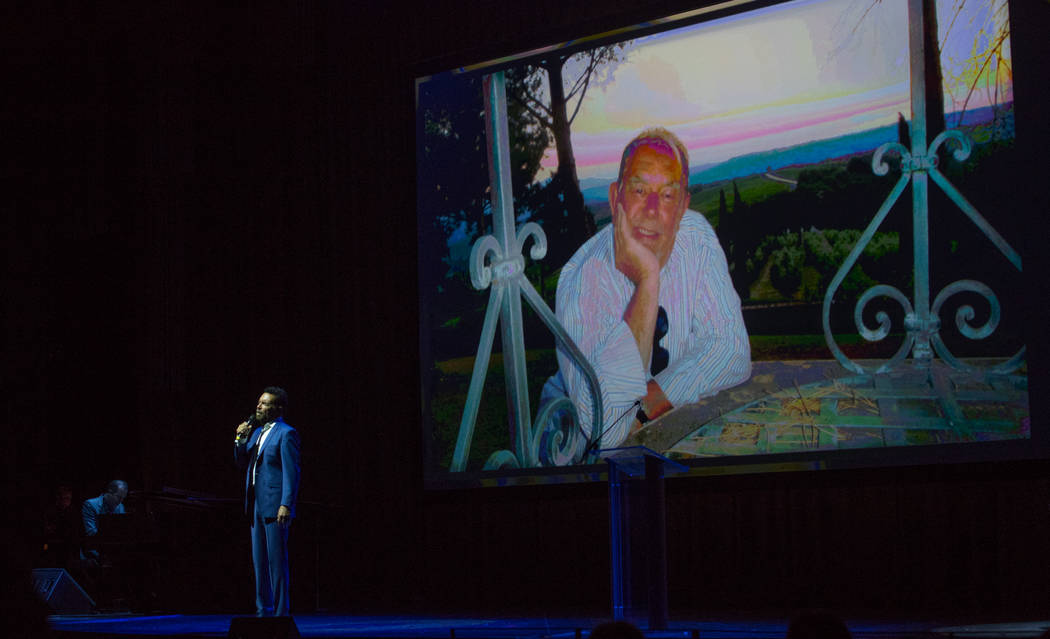 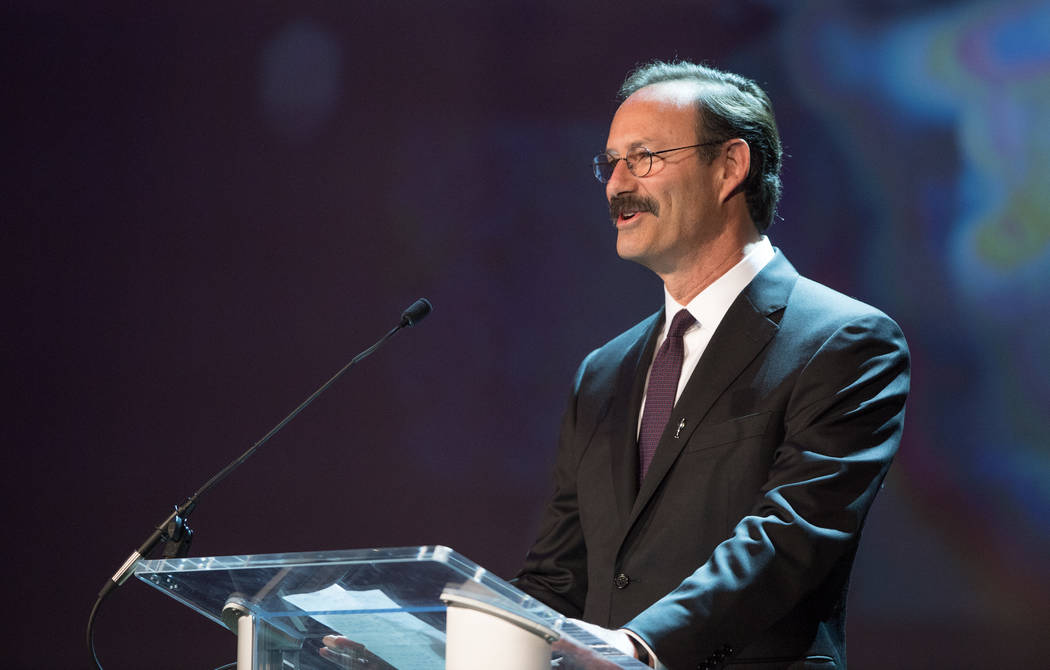 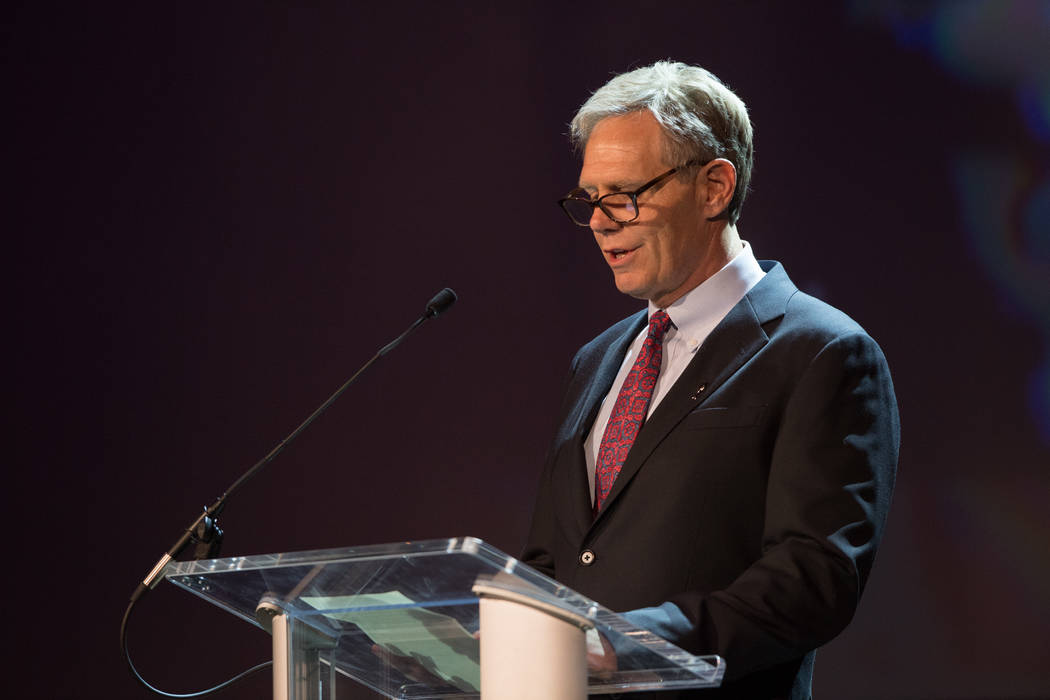 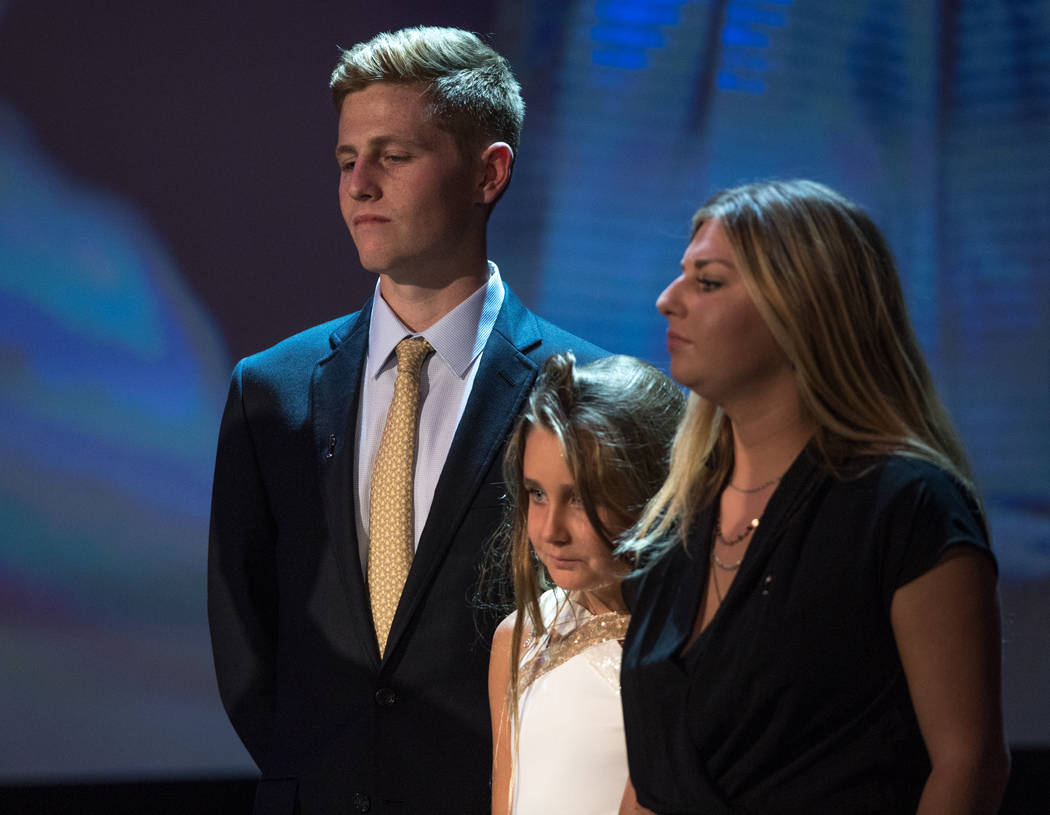 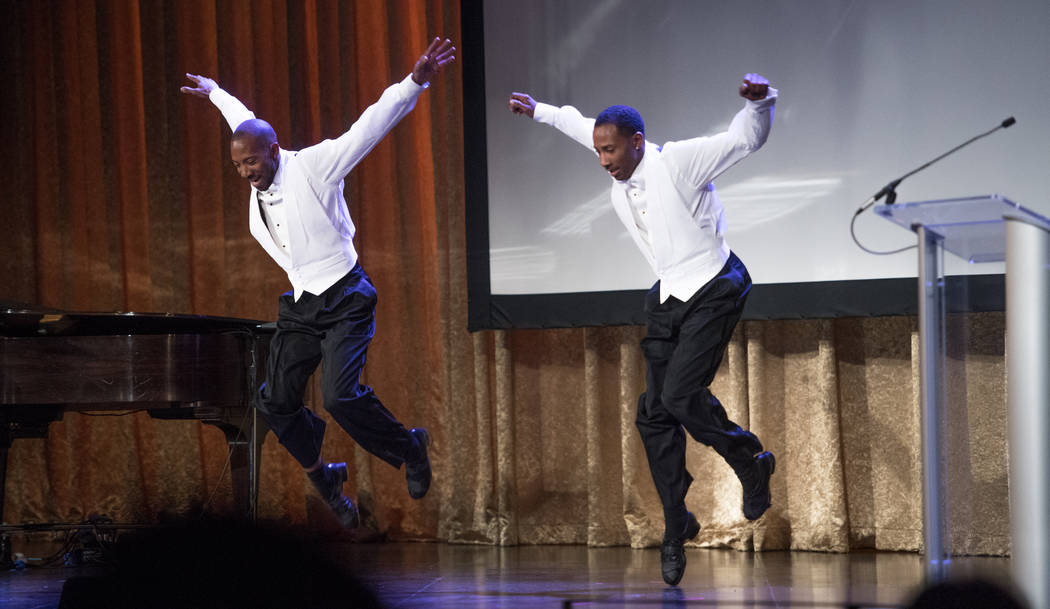 Sean and John Scott of "Absinthe" perform at Leach's celebration of life at Palazzo Theater on Friday, Sept. 28, 2018. (Tom Donoghue) 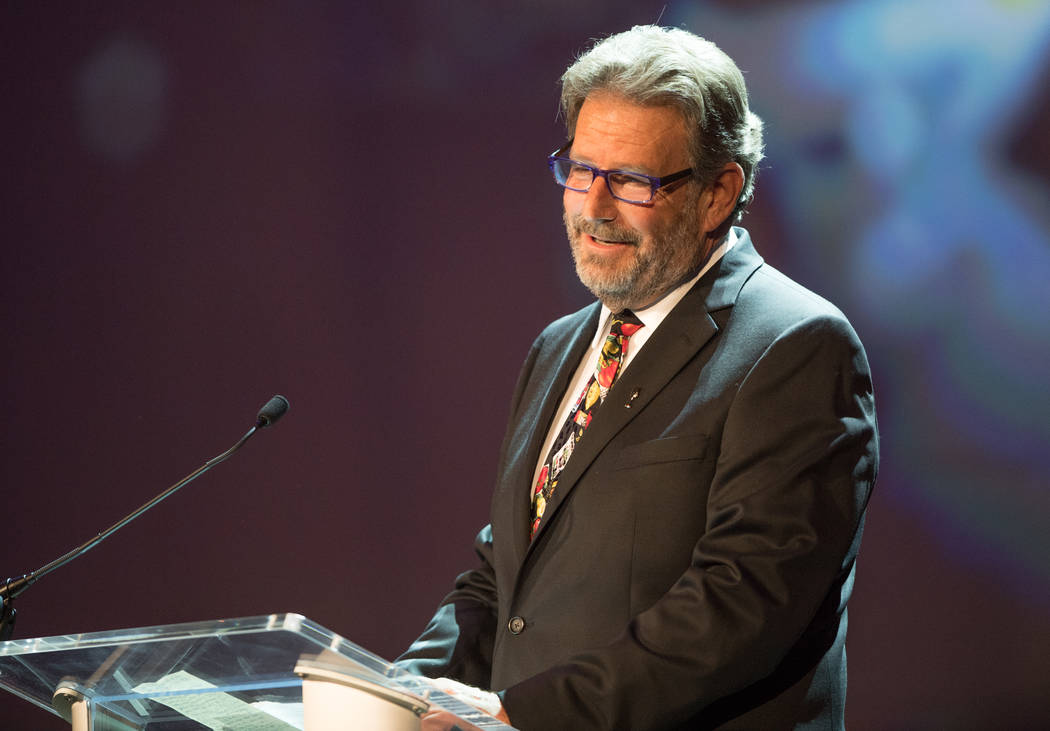 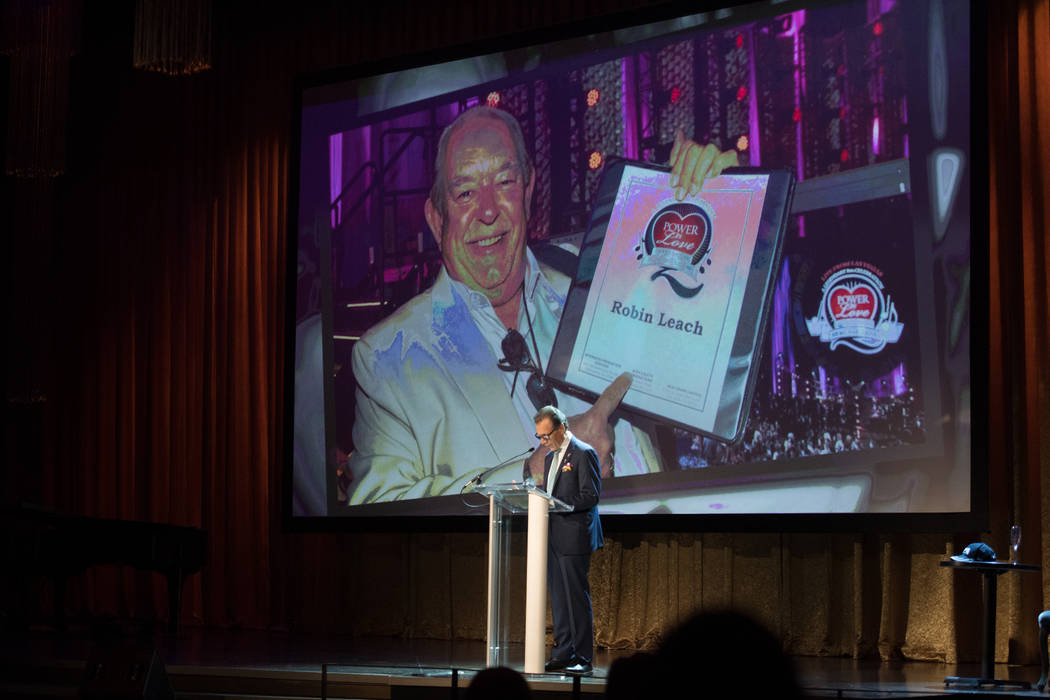 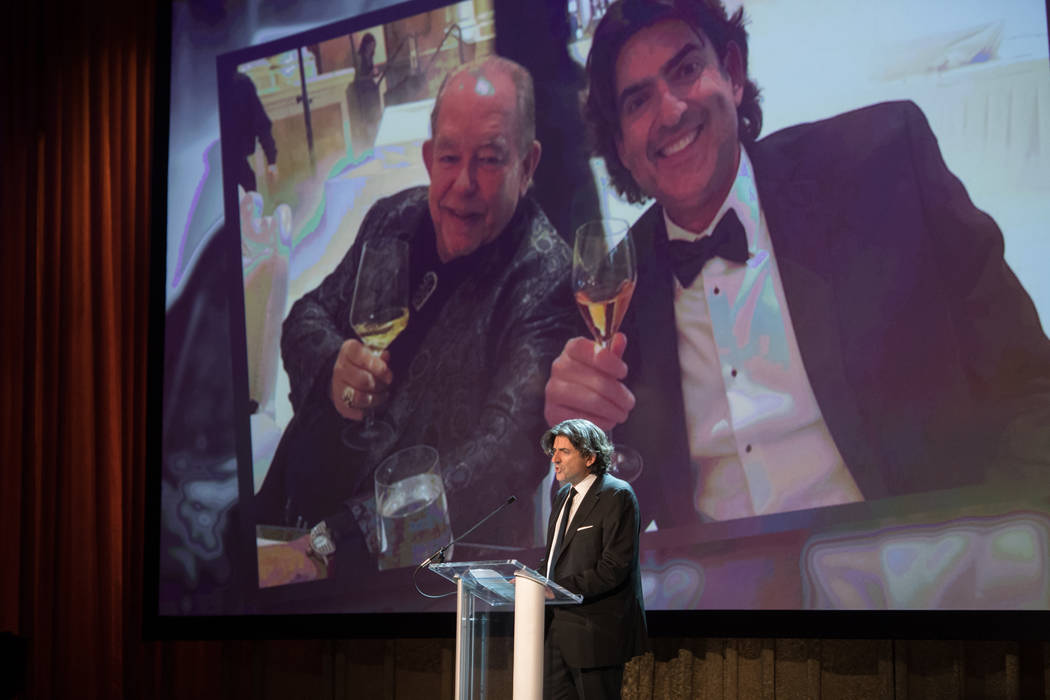 Saville Kellner of Revenue Media and an organizer of Robin Leach's celebration of life is shown onstage at Palazzo Theater on Friday, Sept. 28, 2018. (Tom Donoghue) 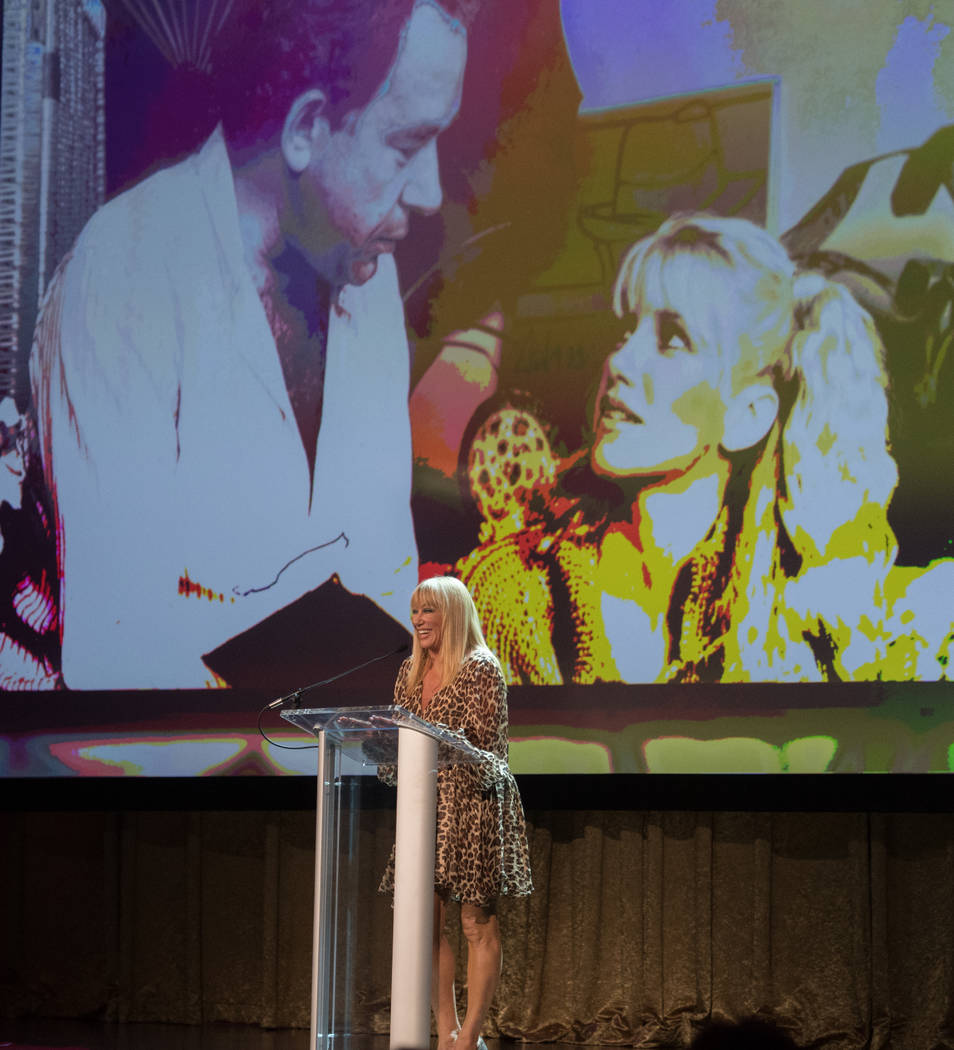 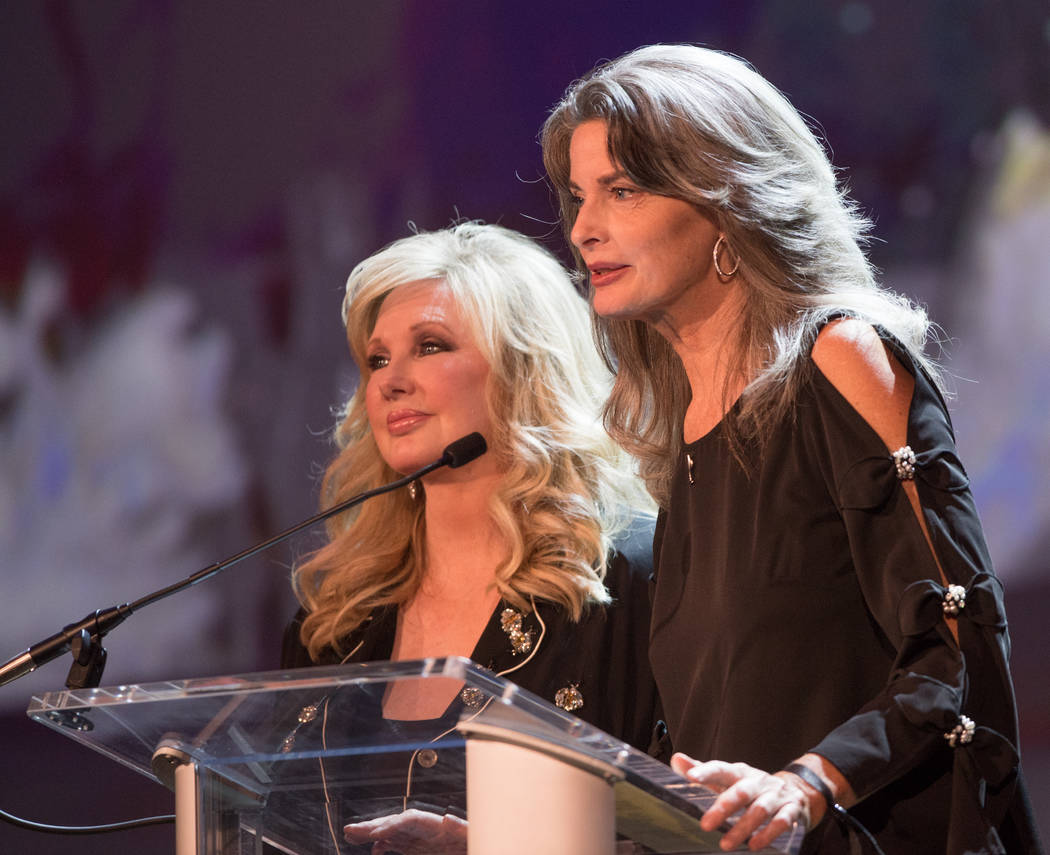 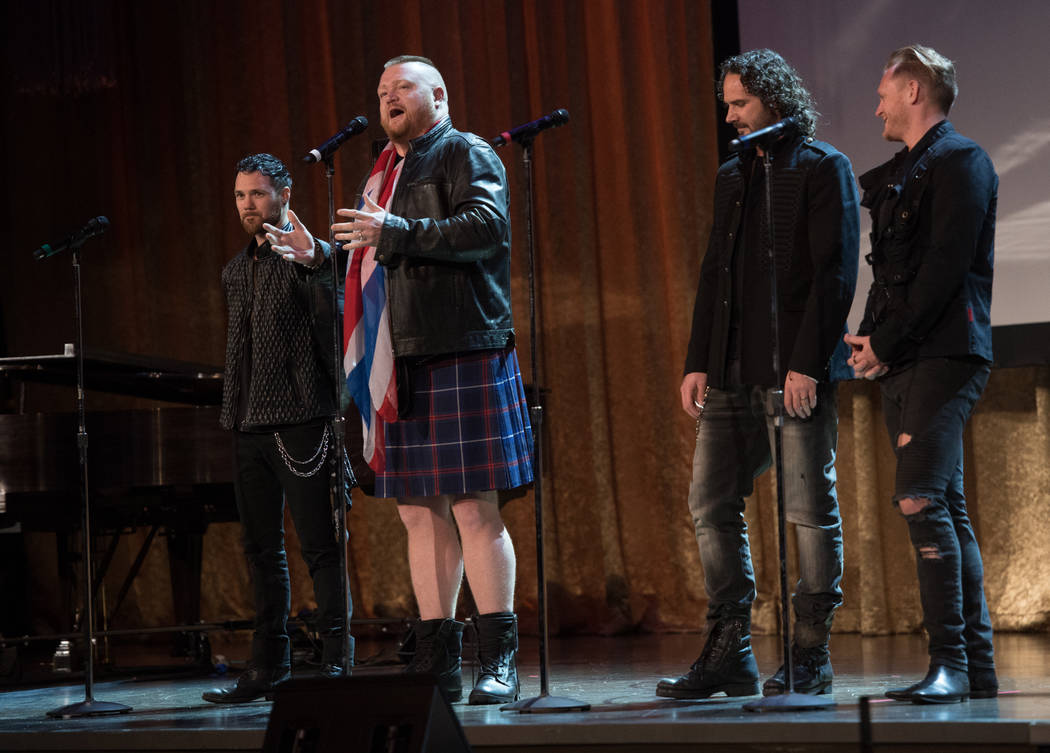 Members of Tenors of Rock of Harrah's Showroom are shown onstage during Robin Leach's celebration of life at Palazzo Theater on Friday, Sept. 28, 2018. (Tom Donoghue) 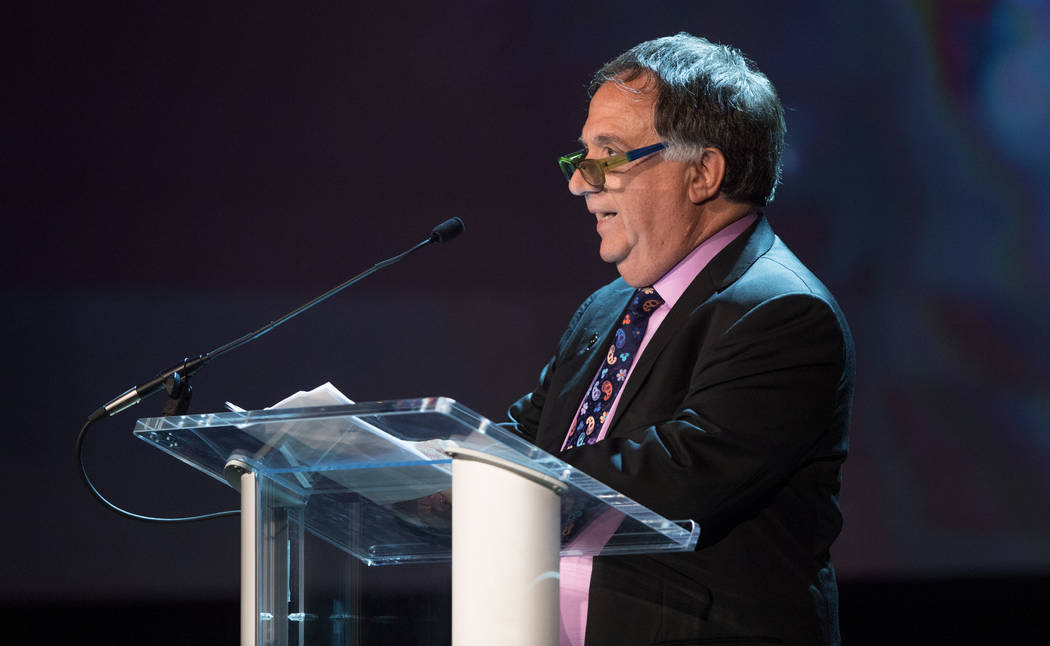 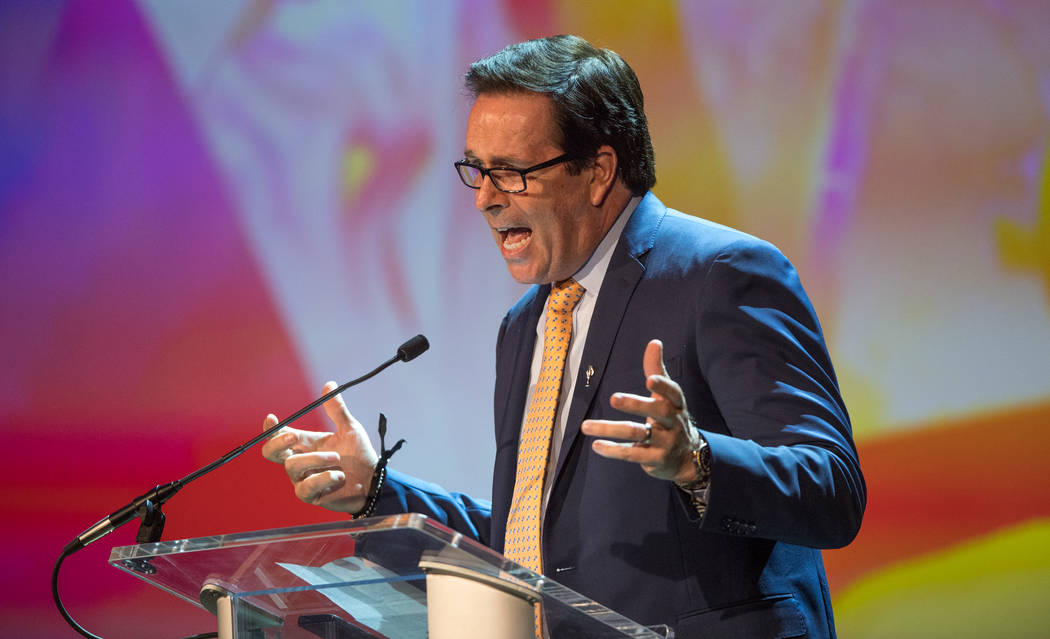 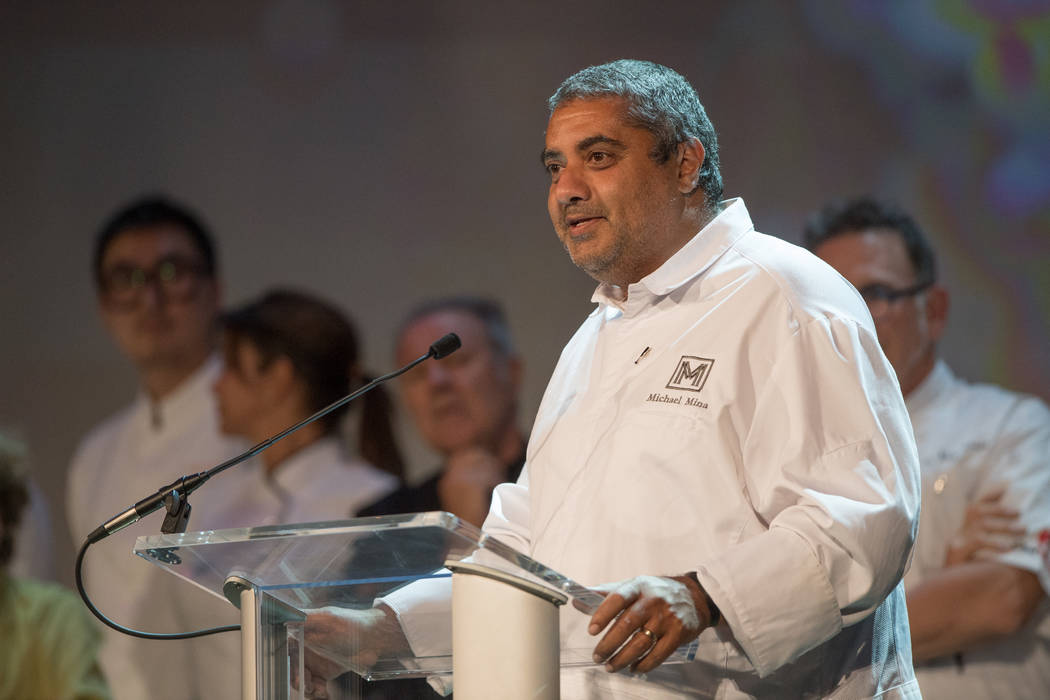 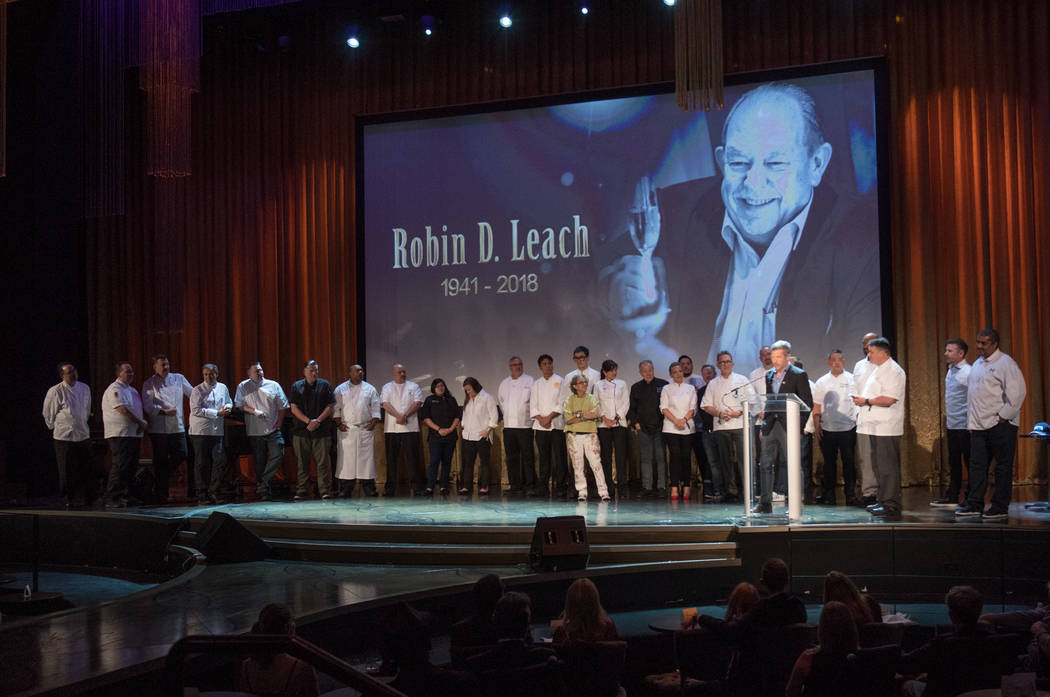 A lineup of star chefs is shown onstage during Robin Leach's celebration of life at Palazzo Theater on Friday, Sept. 28, 2018. (Tom Donoghue) 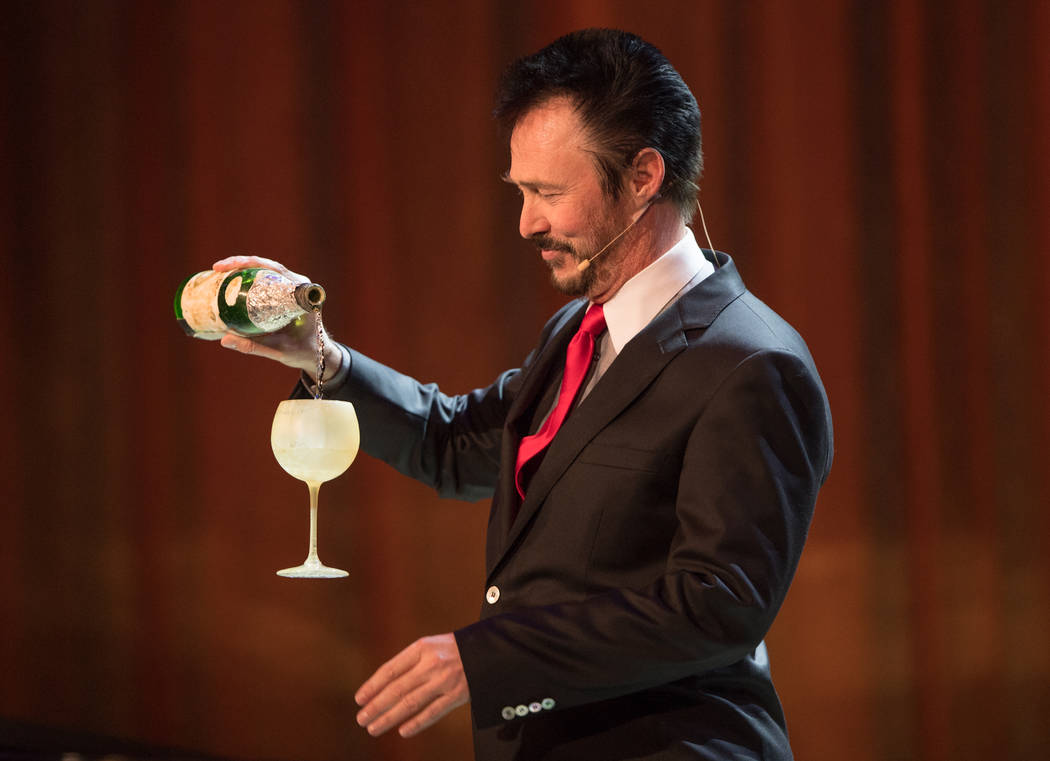 The Gazilloinaire of "Absinthe" at Caesars Palace is shown onstage during Robin Leach's celebration of life at Palazzo Theater on Friday, Sept. 28, 2018. (Tom Donoghue) 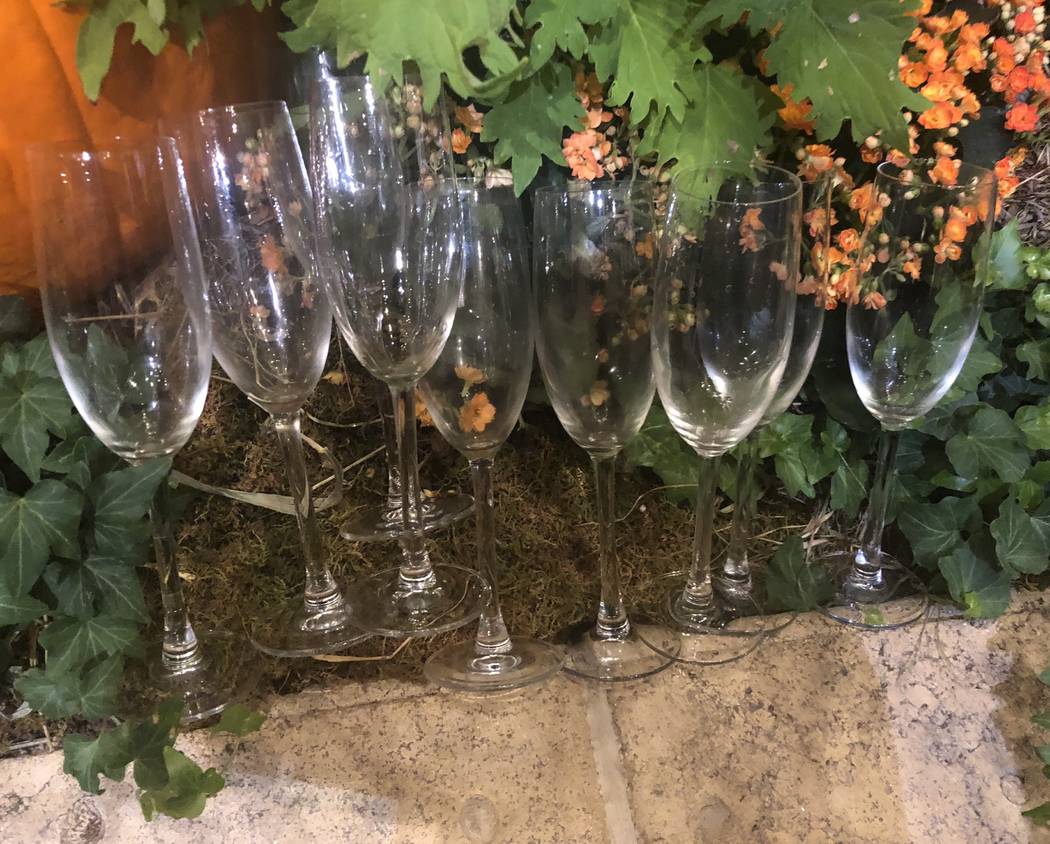 It was the sort of event where you didn’t know whether to laugh or cry.

So we did both.

Robin Leach was honored with a final toast Friday night in a celebration of life at Palazzo Theatre. Robin’s sons, Steve, Rick and Gregg, led a host of speakers that included the celebrity journalist’s superstar friends, including those he met during his nearly two decades in Las Vegas.

The poignant speeches were often dotted with humor, as were the video highlights of Robin’s career (we’d forgotten he’d appeared on “The Arsenio Hall Show” and done Del Monte commercials). Those who knew Robin were convinced the man at the center of the tribute would have laughed along.

Characteristic of the event, dubbed “The Final Episode,” was the opening from Robin’s oldest son, Steven, his father’s leading caregiver over the 10 months beginning with Robin’s stroke in November through his Aug. 24 death in Las Vegas.

Adhering to his family tradition that their patriarch be called by his first name rather than “dad” or “grandpa,” Steve said his father was “a reporter, first and foremost.”

“He had an insatiable appetite for the backstory, taking us into kitchens around the world or a midnight long-tailed boat ride into Burma to meet the owner of a jungle hotel who had graduated from UNLV School of Hospitality,” Steve said from the stage. “He had a love of order, beauty, champagne and food, but above all his family came first. He was brutally honest, a fantastic role model and my best friend. I love you, Robin!”

Shifting his tenor abruptly, Steve introduced the show’s unbilled emcee. “Our host is a man my father admired, was inspired by, who he wanted to be!”— and summoned the Gazillionaire from “Absinthe.” It took Gaz less than 60 seconds to fire off his first F-bomb and insult “all of the fat chefs” seated near the stage who were friends of Robin’s.

Gaz also gave a nod to those “who are going to suffer the most at Robin’s passing — it’s Veuve Clicquot, it’s Cristal, it is Mr. Dom Perignon; it is a very sad day for them.”

Robin’s family and close friends who organized the event sought something their father would have appreciated. They asked Ken Henderson, CEO of Best Agency and a close friend of Robin’s, to handle the task. Henderson drew a familiar laugh from the stage with, “He had stories … And some of you are out there.”

In taking the podium, Gregg Leach said simply, “I will be boring and short. This is a celebration of love, of friendship and family, and to memorialize Robin and his legacy.” Gregg appeared onstage with Robin’s grandkids: 22-year-old fraternal twins Jack and Meg and 9-year-old Gianna.

Rick Leach said the family carried great pride in Robin’s effect on pop culture, through “Lifestyles of the Rich and Famous,” and how he enhanced this country’s knowledge of the culinary culture through the development of Food Network. He noted his father’s “tireless philanthropic efforts” dedicated to Keep Memory Alive and the Lou Ruvo Center for Brain Health, Cleveland Clinic.

“But mostly, we are proud of his kindness and love to me, my brothers and our families,” Rick said. “Whenever we had a difficult issue, he was always available to us. There was not a holiday he didn’t share with his family.”

Robin’s multigenerational reach was evident in such speakers as Morgan Fairchild, Joan Severance and Suzanne Somers. Robin met all of them about four decades ago. Robin had put Somers on the cover of Star magazine — for six issues — when he was editor of that pub.

“ABC owes Robin, because that was what helped push ‘Three’s Company’ past ‘Laverne & Shirley’ and ‘Happy Days’ as the No. 1 show on TV,” said Somers, who also recalled Robin’s one-word review of her cabaret show at Westgate: “Perfect.”

The culinary community turned out in force, with 27 chefs lined up onstage in a show of tribute.

Tom Kaplan, senior managing partner for Wolfgang Puck Fine Dining Group, knew Robin since 1982 and was his neighbor in Las Vegas for 10 years. He recalled that his neighbors were concerned about the possibilities of ribald parties in the neighborhood (Robin, instead, was a courteous neighbor). Kaplan also said the smoked salmon/caviar “Jewish pizza,” now a Spago signature item, was Robin’s idea.

Michael Mina talked of the time he worked at a truck stop in Ellensburg, Washington, at age 15. He mailed a letter to Robin in those days and, to his shock, received a response written by the man himself. Mina today is a culinary superstar, inspired by that gesture.

“I said to Michael, ‘He did not say that!’” Burton said, recalling his disbelief. “At that point I had been a professional magician in Las Vegas for a decade, but that was the night I felt like I was really in show business.”

Representing the Vegas entertainment community were vocal groups Human Nature of The Venetian’s Sands Showroom and Tenors of Rock from Harrah’s Showroom, and the twin tappers Sean and John Scott of “Absinthe.” Human Nature sang “People Get Ready,” and the Tenors covered Eric Clapton’s “Tears in Heaven.”

A man who shared Robin’s affection for celebs, Planet Hollywood International CEO Robert Earl, spoke of how he and his kindred spirit from nearly the same place in England would gossip in a Planet Hollywood suite.

“We spent many pleasant evenings chatting away in my suite, with fresh warm chocolate chip cookies and chilled chard at the ready,” Earl said, “and God help me if the temperature of either was wrong.”

Two of Robin’s friends who saw him near the end of his life spoke of their friend’s powerful will and work ethic. Entrepreneur Saville Kellner of Revenue Media Group was distressed to observe Robin losing his famous voice as a result of his stroke, but said, “Robin had the courage the likes of which I haven’t known. It was not about him; it was all about you.”

Michael Severino of Southern Glazer’s Wine and Spirits and the Ruvo Center, who worked with Robin on every Power of Love gala over the years, said, “Robin was an incredibly hard-working journalist.”

It was left to Clint Holmes to close it out with a warmhearted “Hallelujah,” and a post-show toast of the bubbly at The Venetian’s Waterfall Atrium.

A few guests placed their empty champagne glasses in the attraction’s garden. Like the man who was honored, they were left to rest in peace, after a party we won’t soon forget.