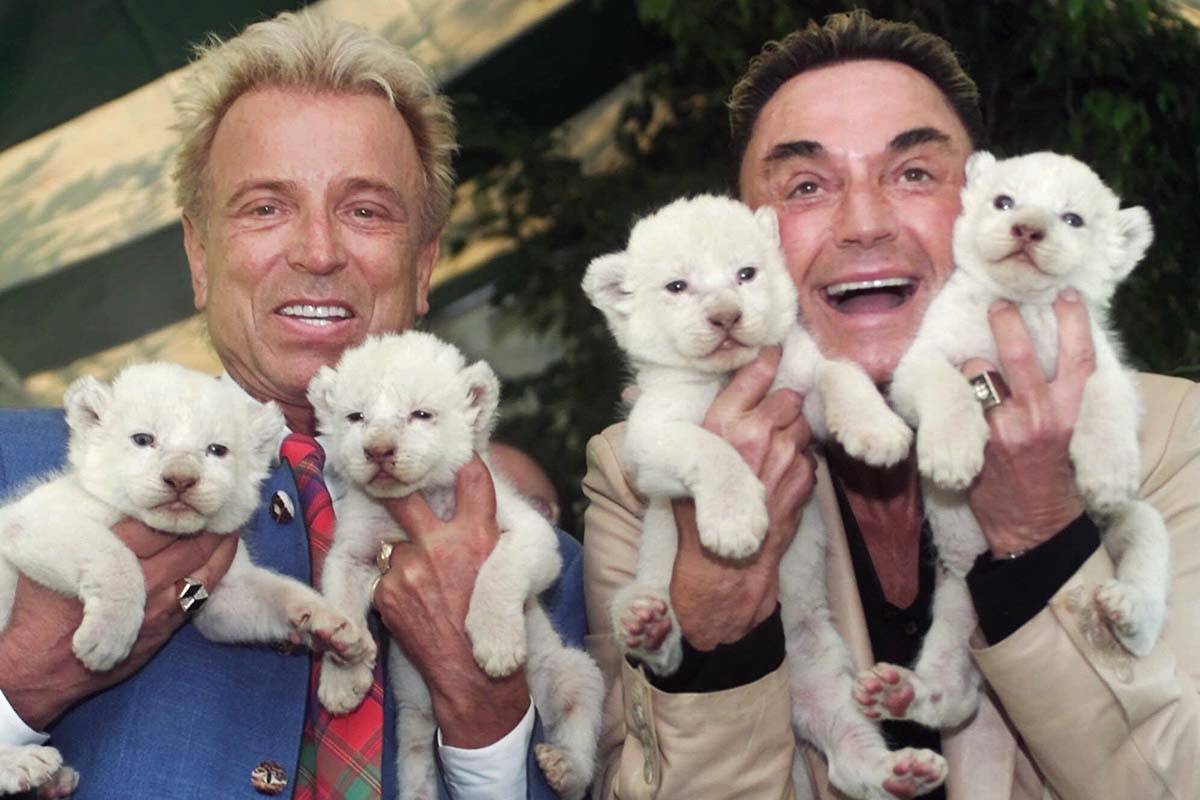 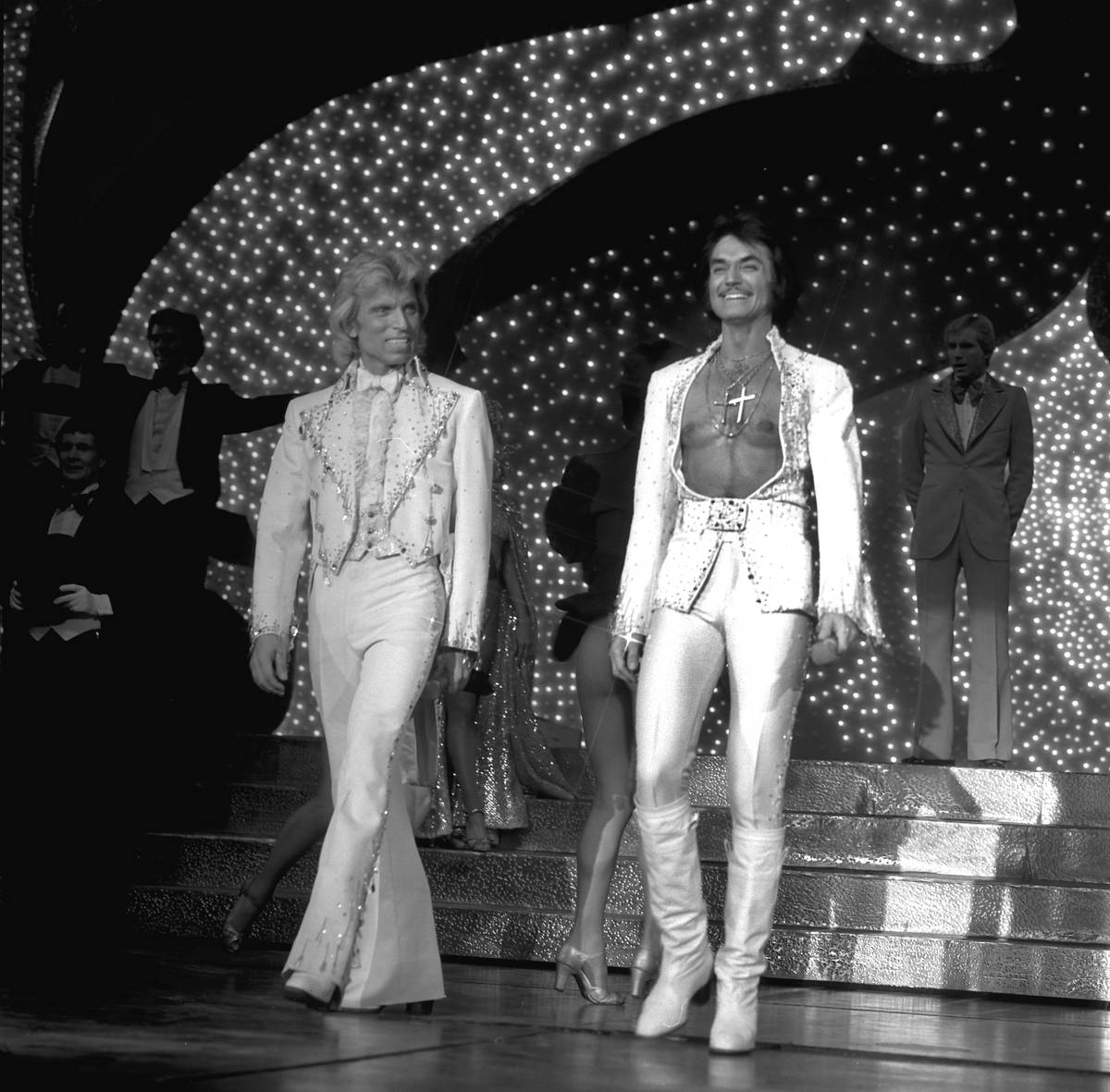 Siegfried Fischbacher, left, and Roy Horn take the stage during their magic show Siegfried & Roy at the Stardust Hotel on Oct. 3, 1980. (Boyd Gaming) 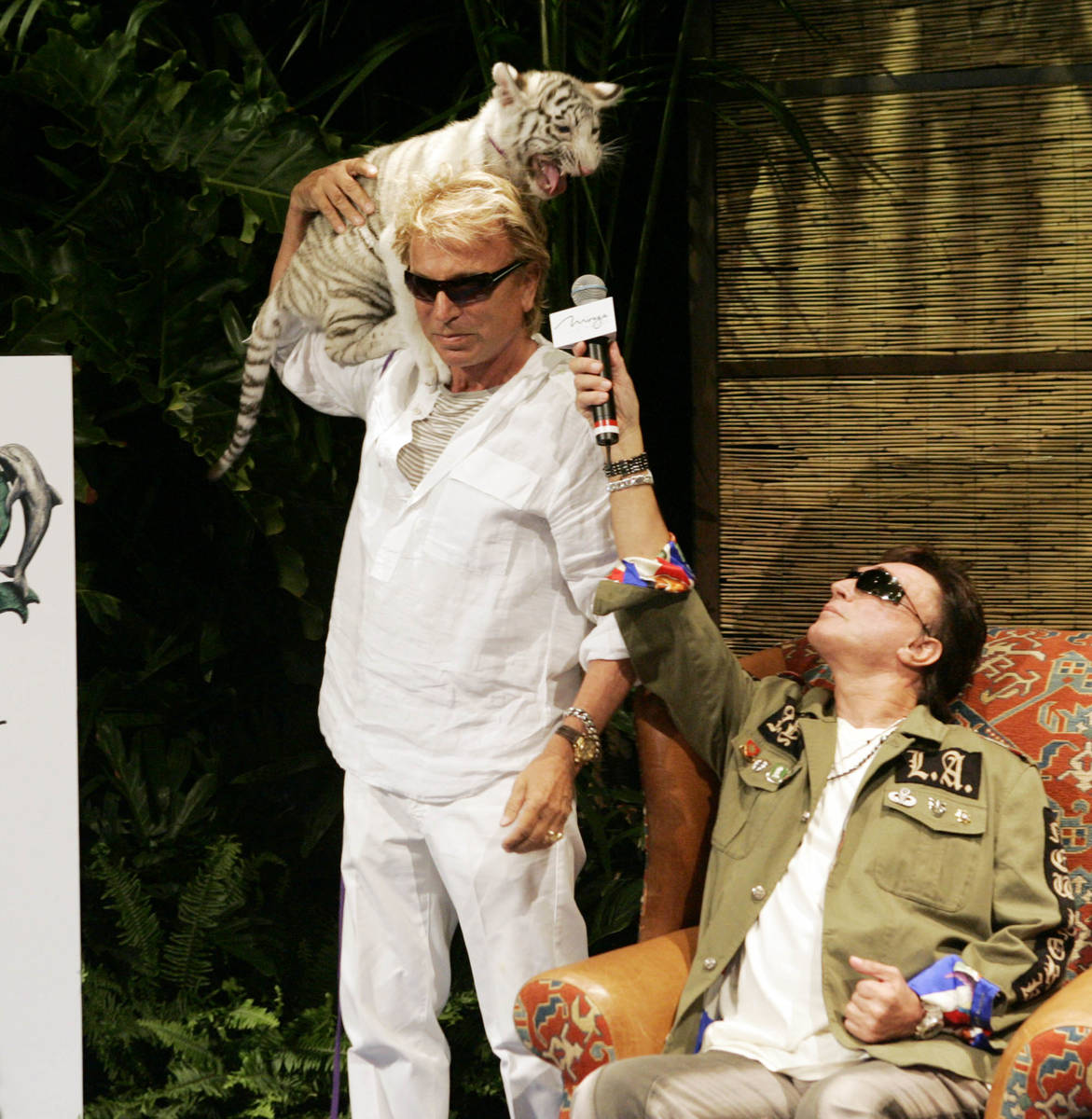 Siegfried Fischbacher, left, holds "Star," a 12-week-old female white tiger, as his show business partner Roy Horn holds a microphone up to the cub to allow members of the media to hear her mew during a press conference at the Mirage hotel-casino on Wednesday July 23, 2008, in Las Vegas. The legendary illusionist duo, who performed under the iconic moniker Siegfried & Roy, held a contest in which elementary school students in the Clark County School District to submitted names for the tiger. (Review-Journal file photo) 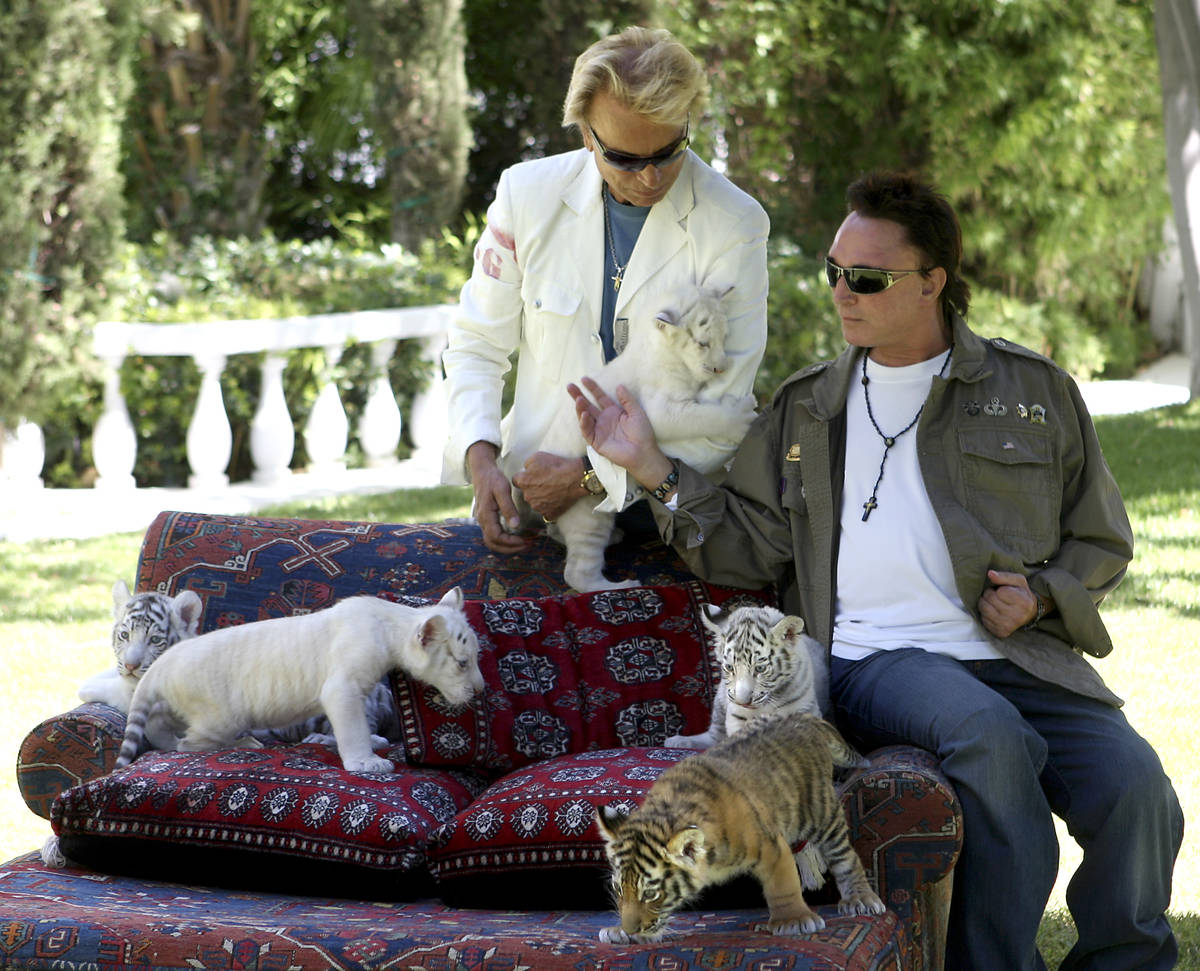 Siegfried Fischbacher, left, stands next to his show business partner Roy Horn as they introducing several tiger cubs to members of the media during a press conference at the home on Thursday, June 12, 2008, in Las Vegas. (Review-Journal file photo) 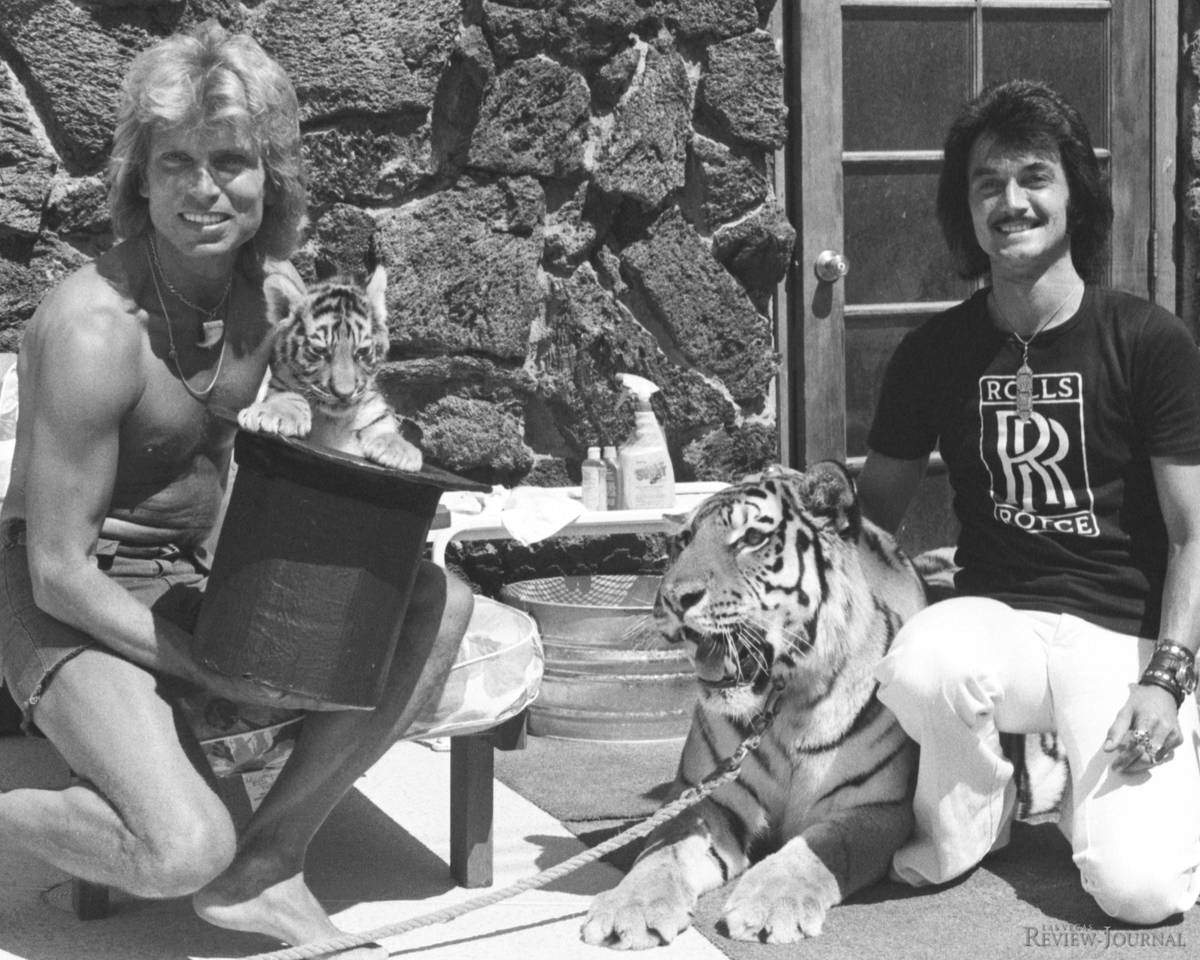 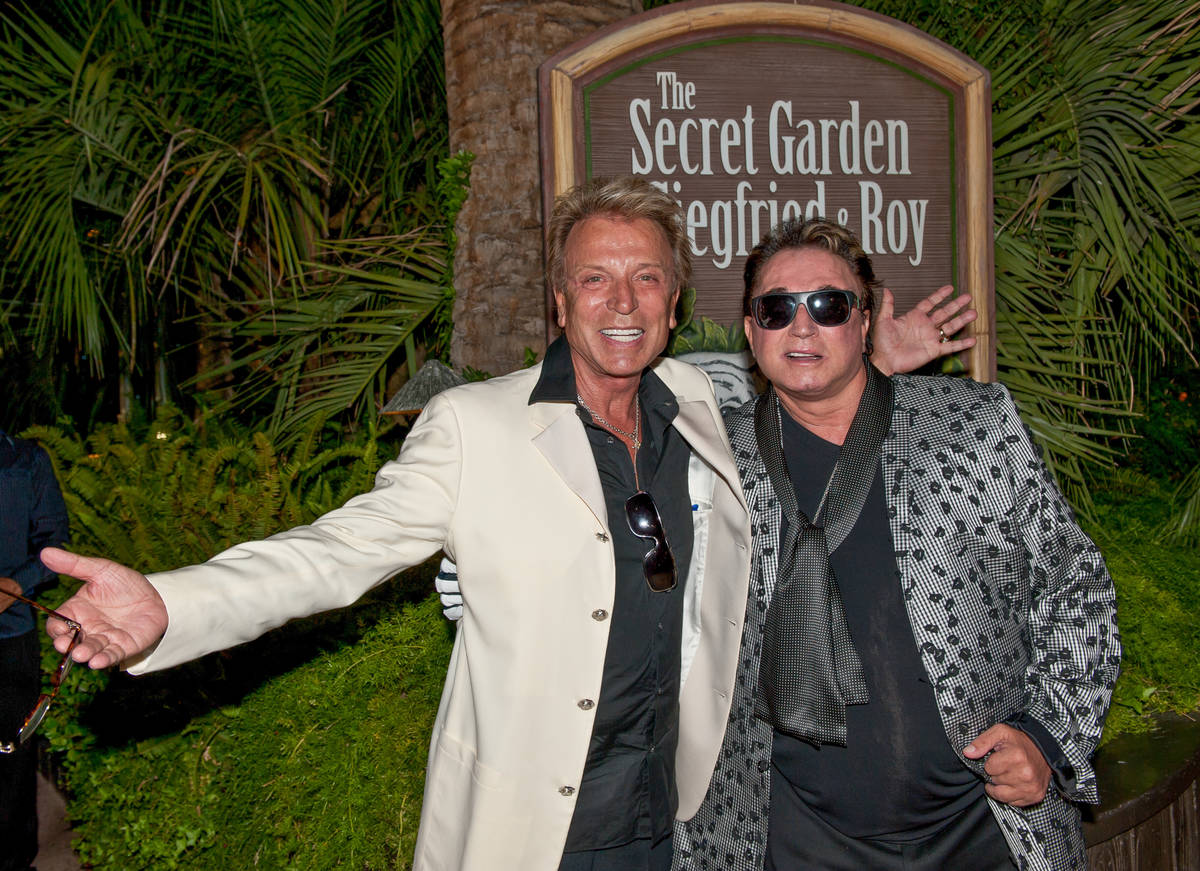 Siegfried & Roy never just showed up to an event. It was always “an entrance,” like a scene in an classic Hollywood movie. Photographers pushing for a shot and flashes everywhere. Spotlights seemed to tail the tinsel-and-tiger guys everywhere.

We experienced this superstar characteristic at the premiere of Cirque du Soleil’s “The Beatles Love” at the Mirage in June 2006. The production, the first Cirque partnership with an outside entertainment partner, was replacing the Siegfried & Roy spectacular.

The blockbuster S&R show closed in October 2003, after Roy’s onstage and life-threatening injuries. He died Friday in Las Vegas of complications because of COVID-19. He was 75.

The debut of “Love” was highly anticipated, to put it mildly. The theater had been dark for nearly three years, and a couple of Beatles were in the house. The red carpet for the premiere was slammed with superstars and media types from around the world. It was electric, and so hot under the lights that night on the Strip.

It was so frenetic that such superstars as Brian Wilson of the Beach Boys and the Eagles’ Joe Walsh easily moved around the scene, perfectly fine not to jump into the fray. But when Siegfried & Roy arrived, they made certain we noticed. There was a heavy push behind the ropes to get close to the duo in their return to the theater. I wound up stepping across the rope, out of bounds actually, to the point where the celebs started their walk.

Siegfried, beaming in a shining white suit, strode past. Roy, in a checked black jacket and loose, red tie, moved by in his motorized scooter. They halted as Paul McCartney followed S&R to the carpet. Suddenly, we had a pileup of legends.

McCartney bent to say hello to Roy, still seated. This wouldn’t do. Roy pushed himself upright with Siegfried grabbing his arm for support. McCartney was cautious, saying, “Roy, Roy, take it easy, man,” in his unmistakable Liverpool accent.

Siegfried responded, in his sturdy German inflection, “No, we stand.” The duo needed to meet Sir Paul, eye to eye.

I recently related that moment to S&R’s venerable manager Bernie Yuman, who said, “I always felt The Beatles were the only ones who could follow Siegfried and Roy into that theater.” It was true, in fact, that night.

The moment underscored what we’d learned about S&R over the decades. They were born showmen, and pure Las Vegas dazzle. They brought the same splash of spectacle to magic that Liberace had delivered to classical music. Magicians were known to make rabbits disappear into top hats; these guys were producing full-grown tigers amid blasts of pyrotechnics.

Penn Jillette said Friday afternoon, just after Roy’s death was announced, that he and Teller used to think they were being humble by arriving to events in jeans and work shirts. By comparison, he said, S&R were the ostentatious ones, parading around in their carefully assembled stage regalia.

“But what we were saying was, ‘I don’t have to do any work, I’ll just show up,’” Jillette says. “And they were in jackets, full hair and makeup. It occurred to me that they were actually working, doing their jobs of being in show business.”

Always in show business. We have appreciated, over time, S&R’s enormous impact on Las Vegas Strip productions. The touring version of their Vegas magic production actually performed in Tokyo and Osaka, Japan, and also Radio City Music Hall just before opening at the Mirage.

This little magic show required four 747s to transport. Two theaters, costing $10 million apiece, were built for the shows in Japan — and dismantled when the duo left. This was some bonafide showbiz power.

But I also recall the quieter moments, the intimacy of the duo’s interactions with fans. In later years Roy emphasized his presence with a tight handshake, and over time had become more forceful in his speech. “Ask me something!” he often said as we met. Siegfried for years has been showing up at the Secret Garden at the Mirage to meet well-wishers. They have been unannounced appearances, where he makes his special S&R-branded coins appear on the arms of kids, and also grown-ups.

I once told Siegfried I had a friend in the hospital, whom I was visiting after talking to him. He grabbed my arm and said, “Please give him this, and tell him to get well soon.” And there was the coin.

About a decade ago I ran into the guys unexpectedly, at the gym, of all places,. I was seated on a bench, sweaty after a workout, and a group appeared from the nearby locker room — immediately I heard Siegfried’s voice. I shouted, “Hey!” and he turned around, smiling. “You are stalking us!”

“The only thing I am stalking is the elliptical,” I said.

The group, a couple of caregivers and Siegfried & Roy, then went off to work on Roy’s rehabilitation. He pushed himself hard, with his loyal partner Siegfried as chief taskmaster. This was not a red-carpet walk, not by a long shot. But whether at the gym, or the theater at the Mirage, displaying resiliency was a part of the job. For Roy Horn, it was a show-business tradition.