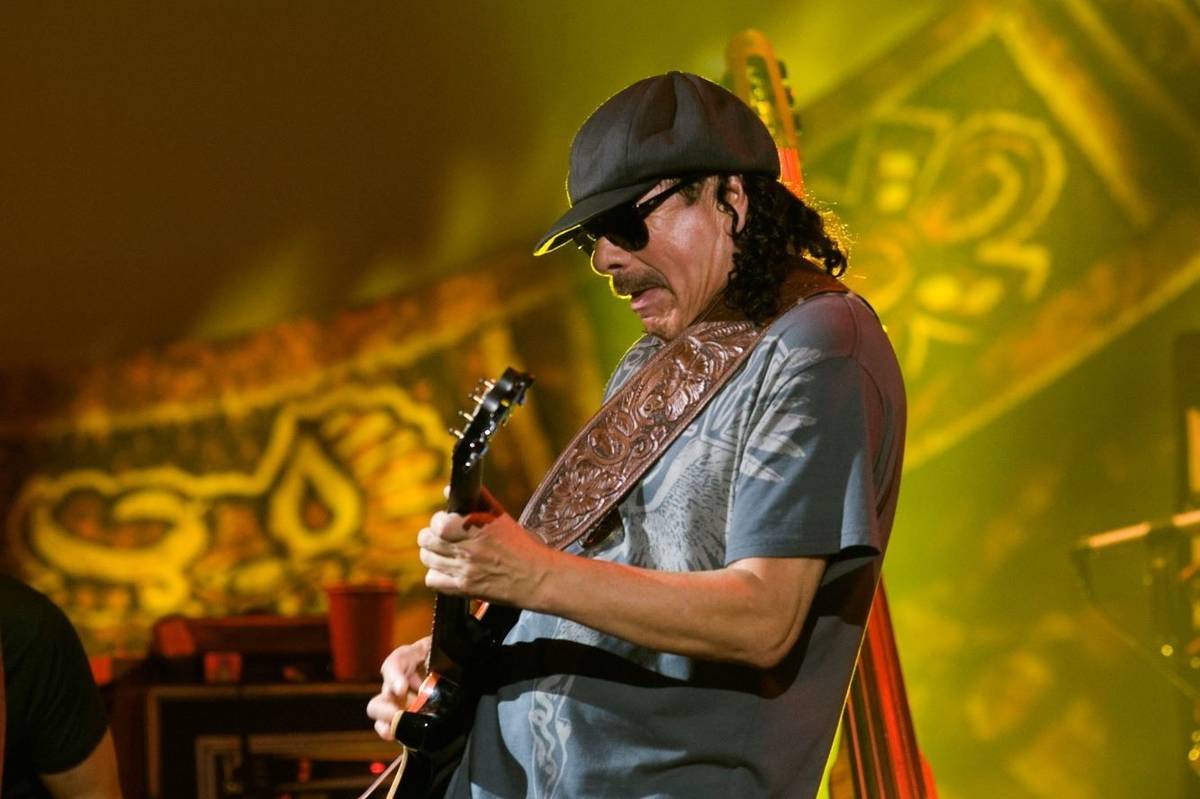 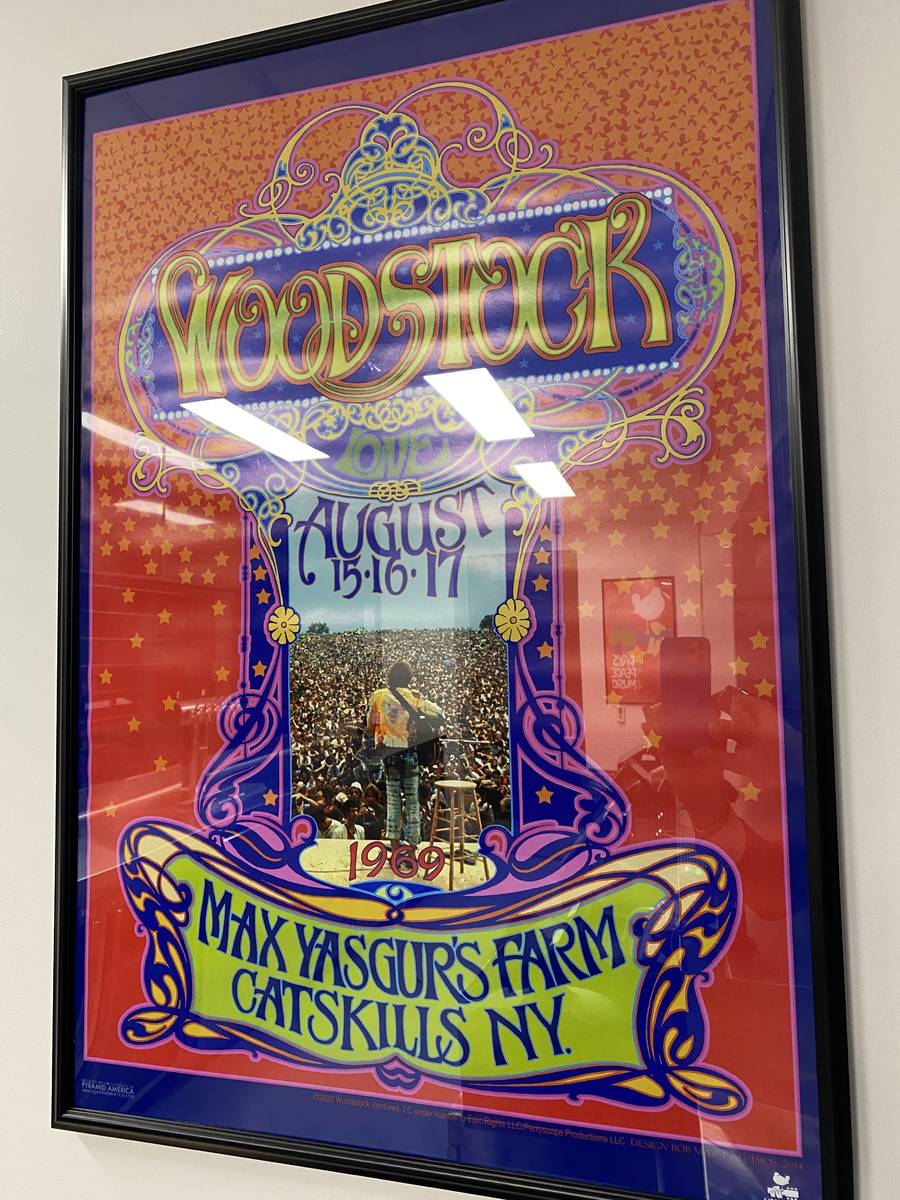 A Woodstock poster is shown at The 1960 bar at Allegiant Stadium on Thursday, April 29, 2021. (John Katsilometes/Las Vegas Review-Journal) @JohnnyKats 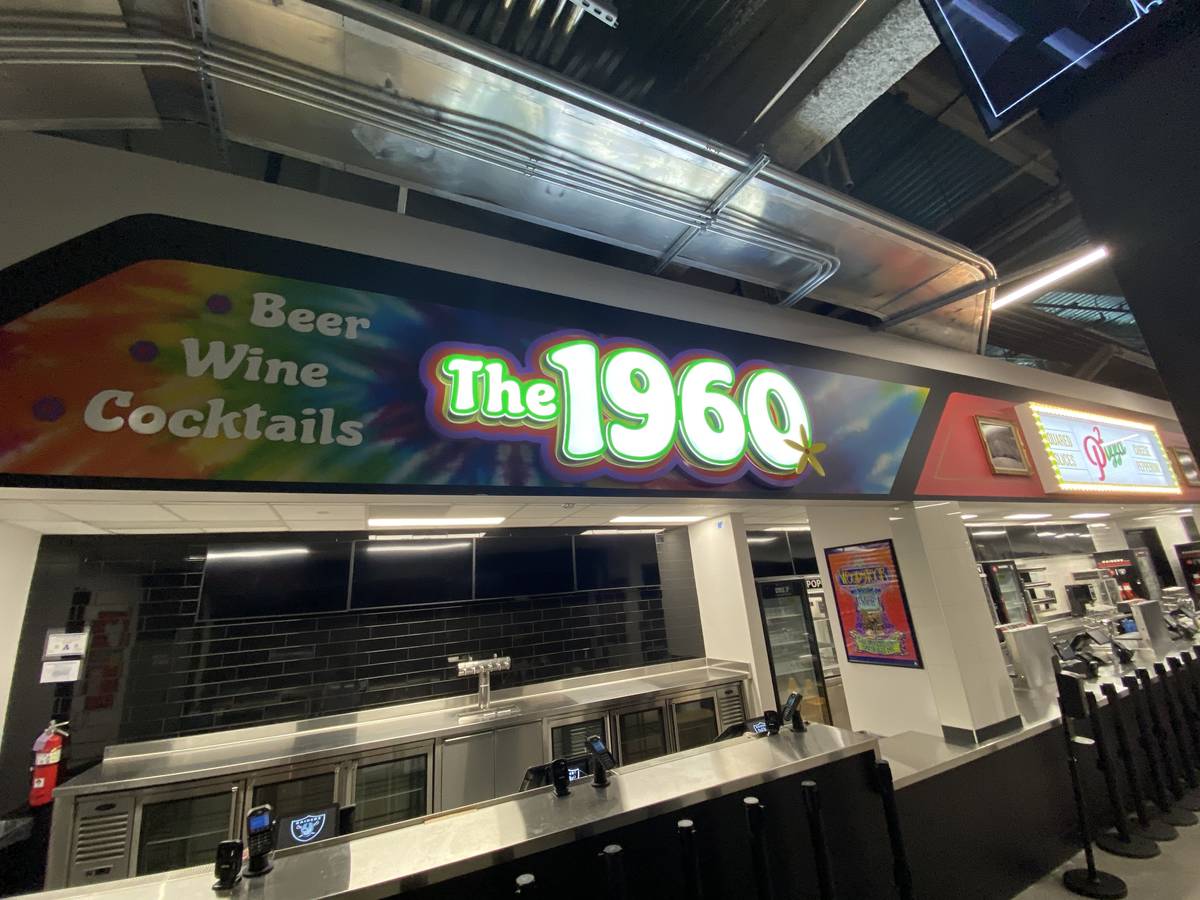 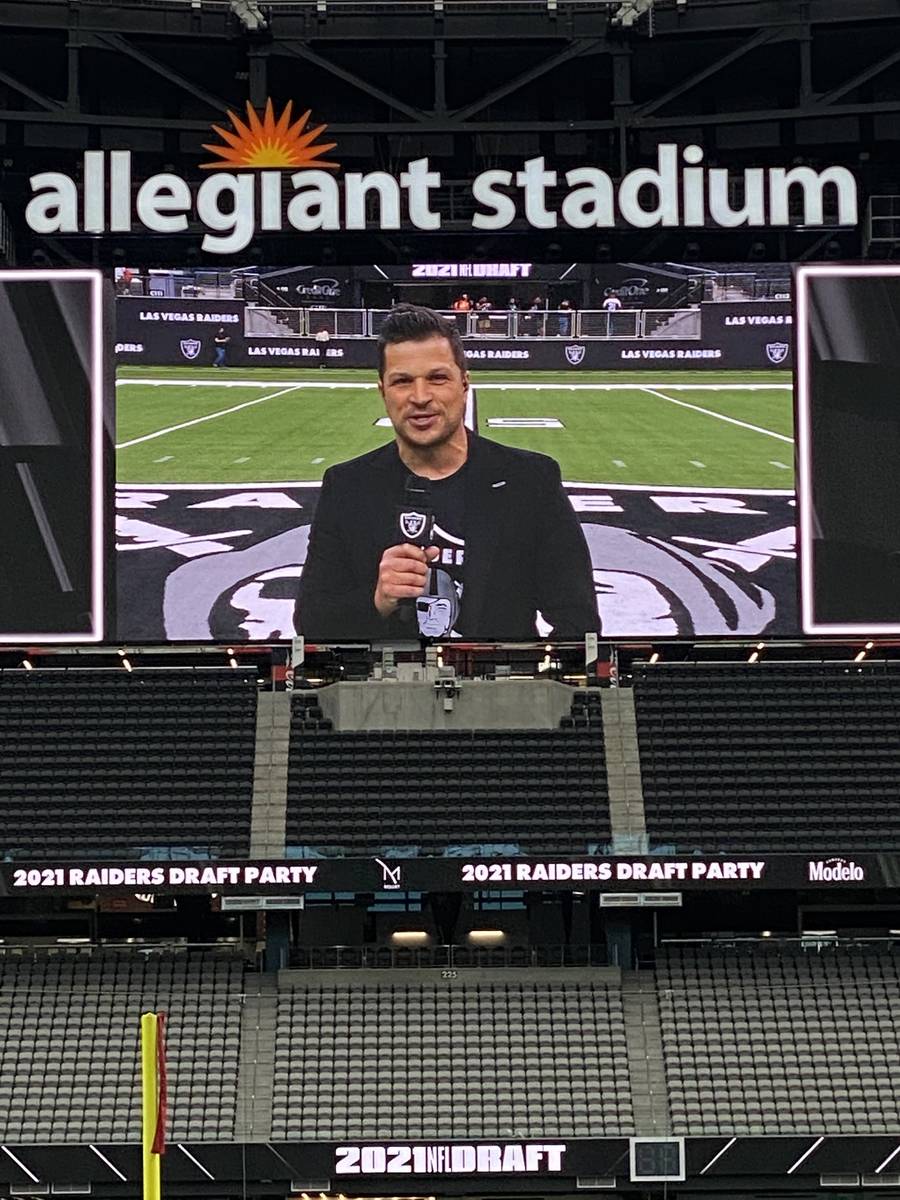 The Kats! Bureau at this writing is in Section 101 of Allegiant Stadium, in the end zone about 60 yards from the base of the Al Davis Memorial Torch. Impressive. But still trying to find the power source.

We have learned here today that peace and love can exist in Raider Nation. The 1960 bar, with its groovy, psychedelic logo and a vintage Woodstock Music Festival poster displayed on the side. And a real Woodstock headliner, Carlos Santana, has been a Raiders fan for nearly 50 years.

The rock legend is similar to the franchise in that he moved to Las Vegas from the Bay Area, though he still has a home there.

Santana says is eager to reunite with the team at Allegiant Stadium. He’d love to play for the Raiders, and we don’t mean cornerback.

”It would be a great honor, you know. I became a Raiders fan in 1973,” Santana said when asked about performing during a Raiders game at Allegiant Stadium. “I realized that the Raiders have this commonality and connection with the street. I don’t know how it is now, but there was a time when people would sell more Raider merchandising than anything because people in the hood, the ghetto, the barrio, the shantytowns, identified with them.”

He made an oblique reference to the Dallas Cowboys, compared to the Raiders.

The Raiderettes walking out to perform on the field for the first time! pic.twitter.com/O5NWv5vPCz

“For some reason there’s America’s Team, and then there’s the Raiders,” he said.

Santana has not been inside Allegiant Stadium yet. But he is friends with Raiders owner Mark Davis, who has said he wants Santana to rock the stadium at halftime, pre-game or both when the place is filled.

Santana would be up for a full classic-rock revival in Allegiant. He mentioned the 2016 San Francisco Fest at AT&T Park, home of the San Francisco Giants. This would be a concert with a unifying vibe.

“It’s not out of the realm of possibilities,” Santana said. “We did a thing like that a while back with Tower of Power, Doobie Brothers, Steve Miller, Santana and Journey. We did that about three or four years ago, so we can put a new spectacle, a new event, in there.

“With everything happening, with division, separation and feat, We need to bring this to America. The thing that usually unites us is music.”

In a pre-draft news conference at the back of Section 101, Raiders President Marc Badain noted Garth Brooks’ mobility, in terms of scheduling, as the first full-house act at Allegiant Stadium. Brooks’ sold-out show is set for July 10. The concert swiftly sold 65,000 tickets, then was twice bumped back.

“It’s been postponed twice, last August, when we thought it would be the first event,” Badain said. “But it is the first large-scale event here, and we have a UNLV game leading into our pre-season games in August.” He’s going to be with Brooks in July.

The Raiders preseason schedule will be released May 12. The first football game scheduled for full-capacity is UNLV-Eastern Washington on Sept. 2.

Mark Shunock is the Las Vegas Raiders’ in-stadium announcer, making his first appearance in that role Thursday. Shunock will be throwing a charge into the crowd (when there is one) in the same way he rattles T-Mobile Arena for Vegas Golden Knights fans. We remember meeting Shunock as Lonny in “Rock of Ages” at The Venetian nearly nine years ago. He excites the space in the same way he excites The Space.

Worth the hype and grooving with great zeal, the Raiderettes dance team made their debut at the team’s draft party Thursday at Allegiant Stadium. For posterity, know that Def Leppard’s “Pour Some Sugar On Me” was the lid-lifting number.