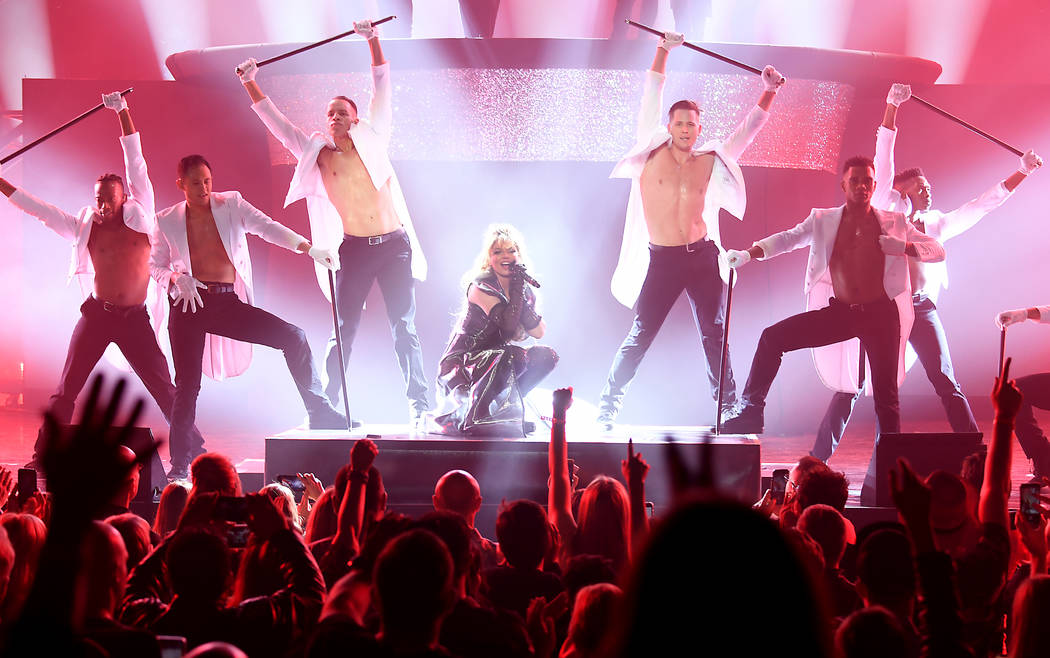 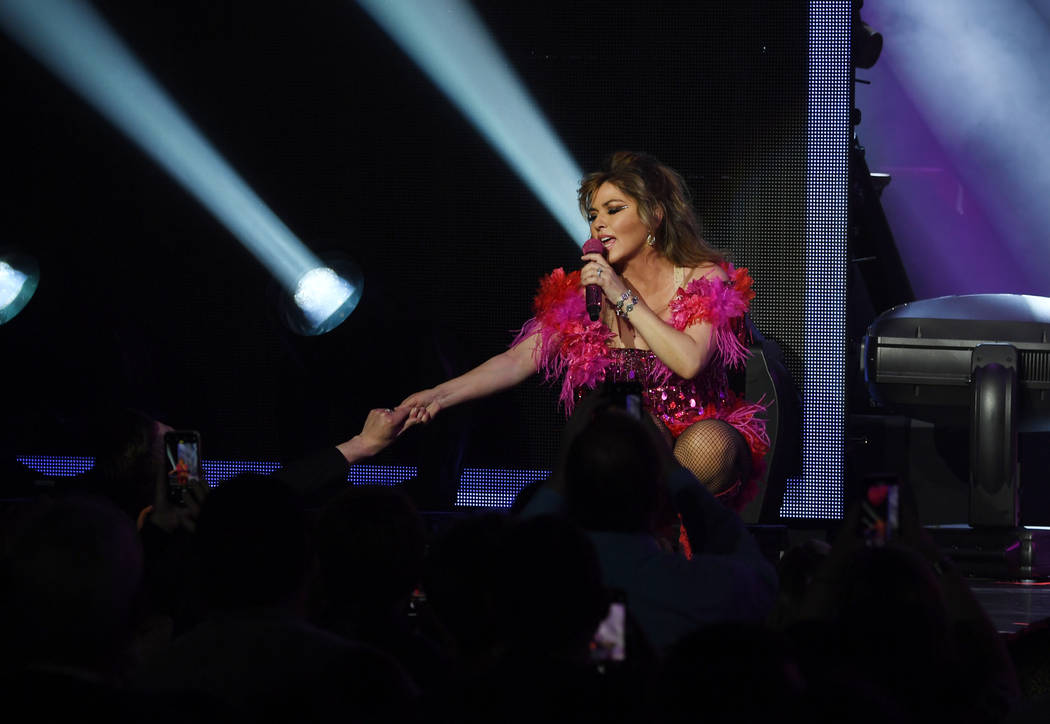 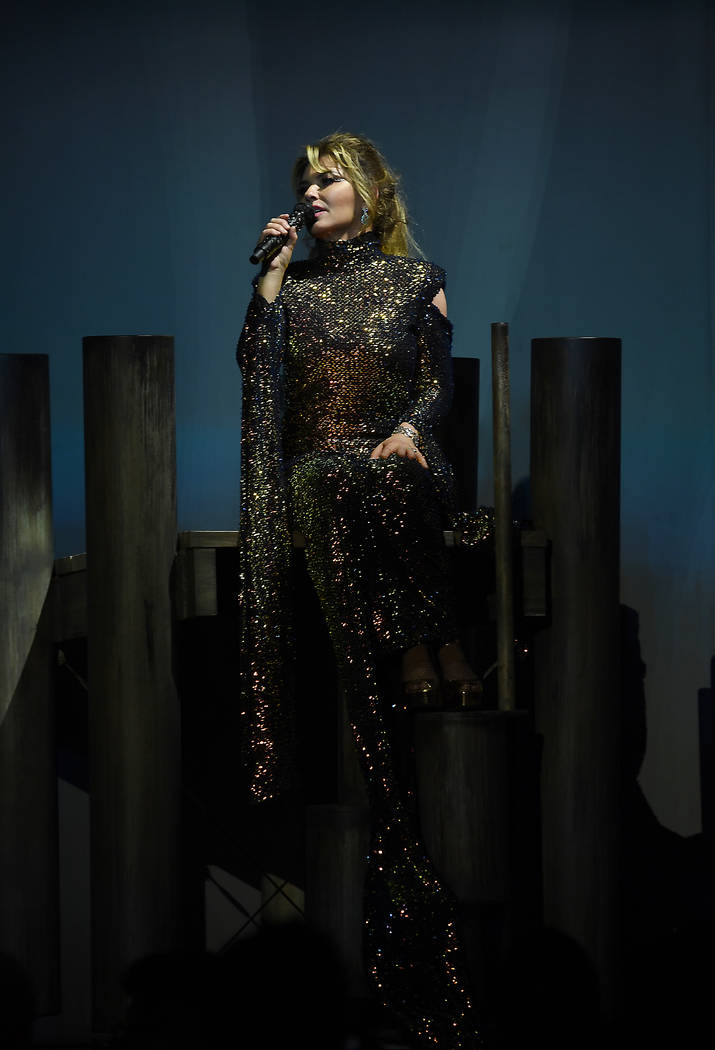 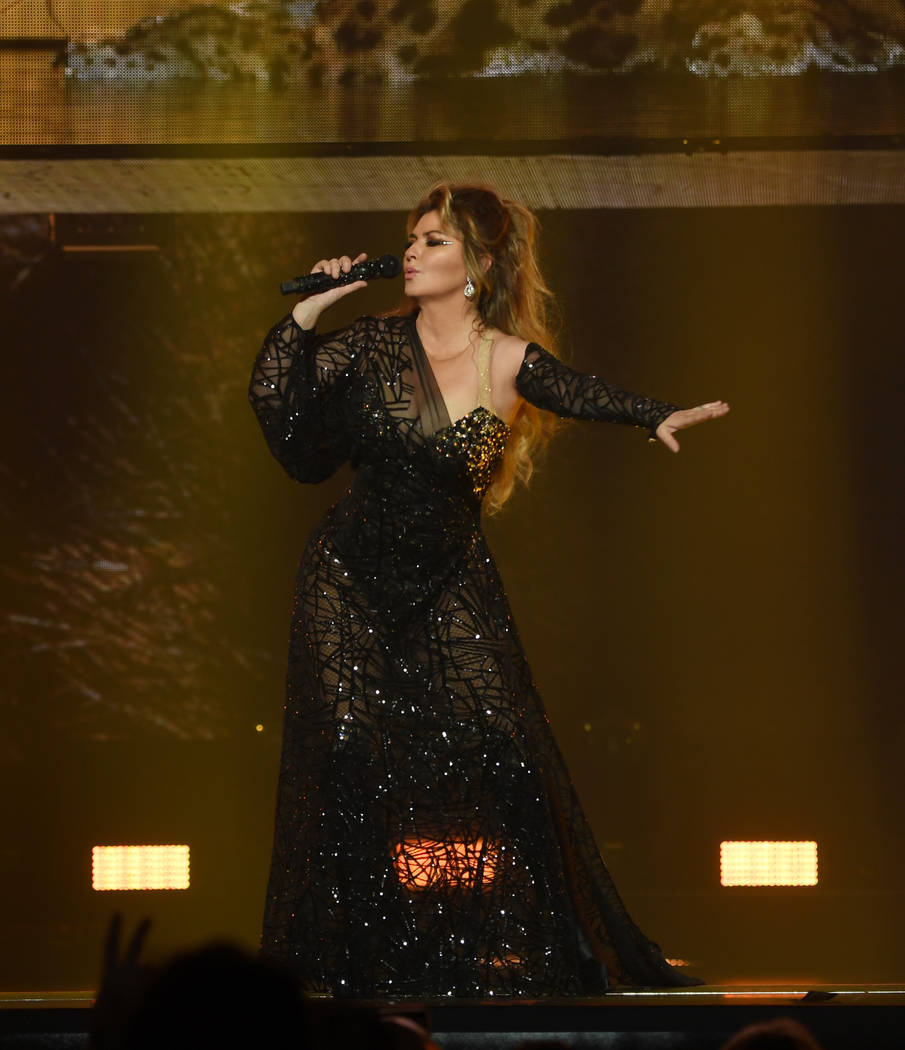 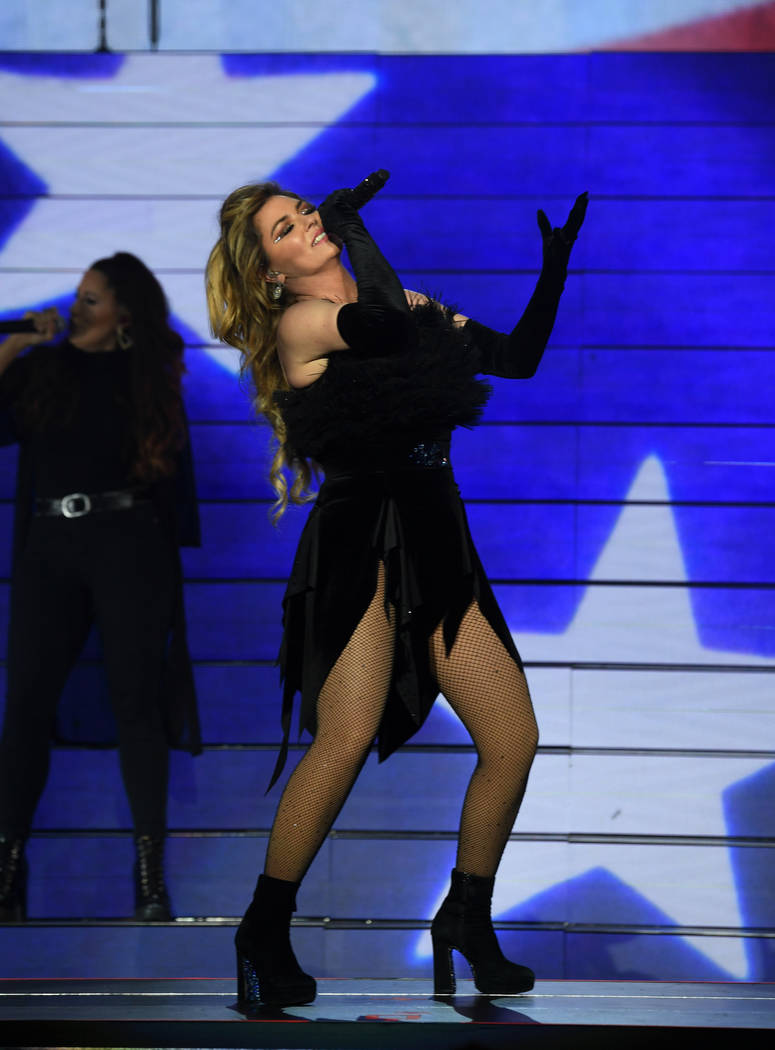 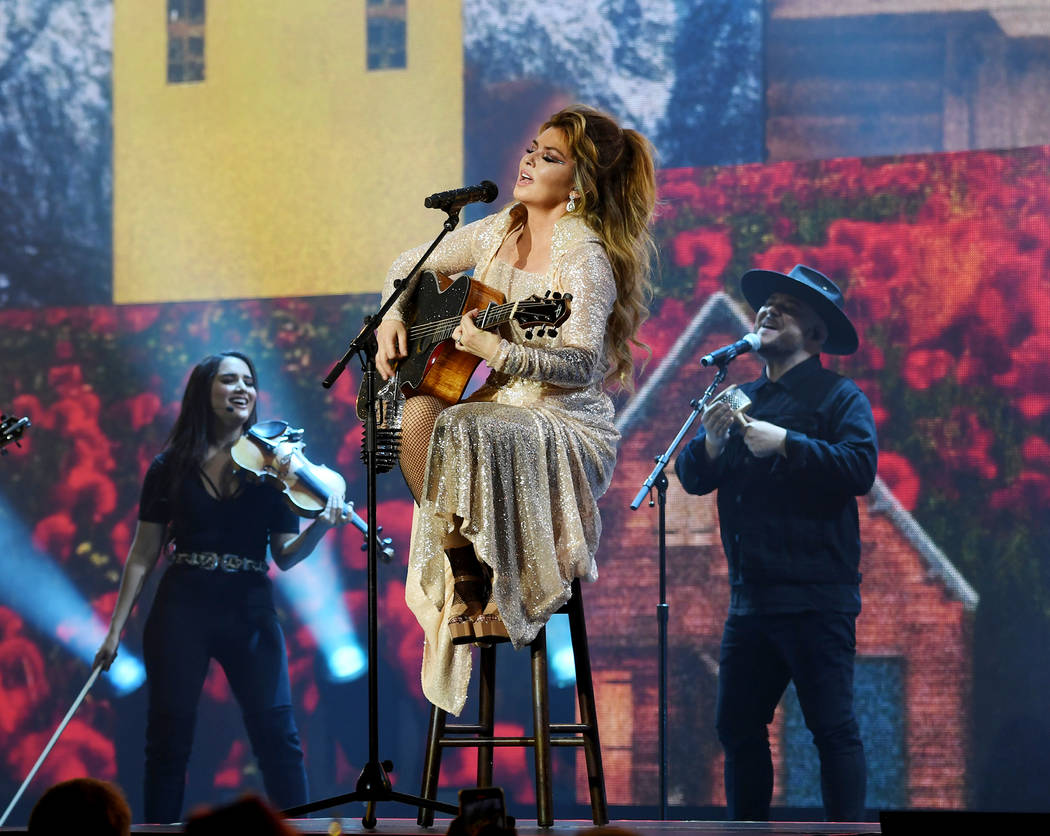 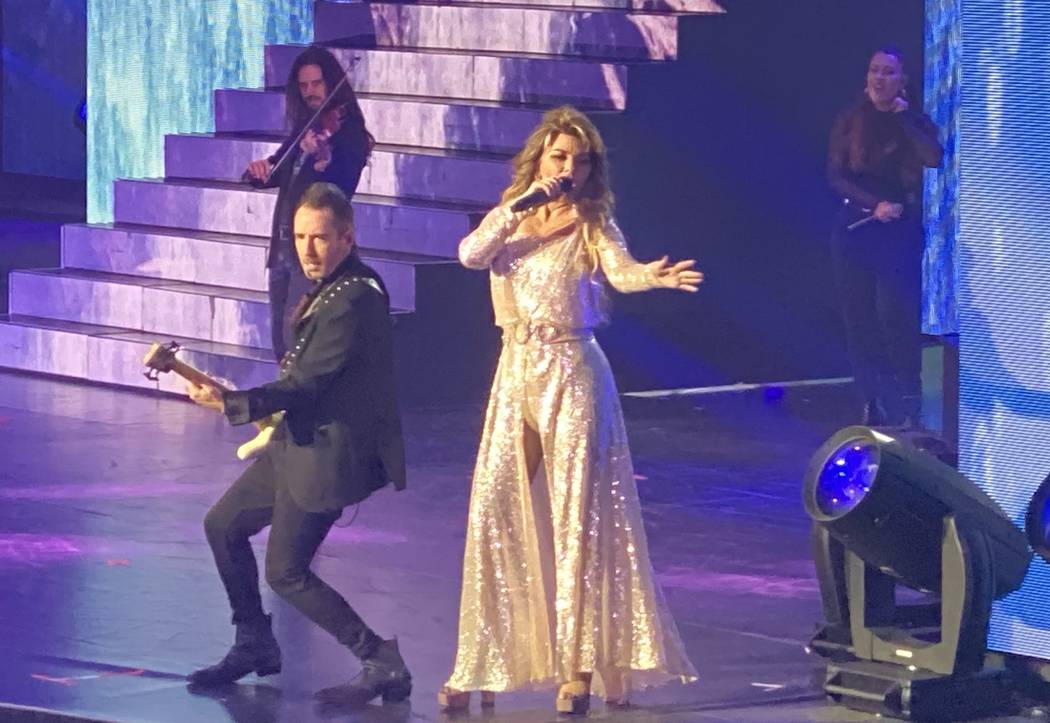 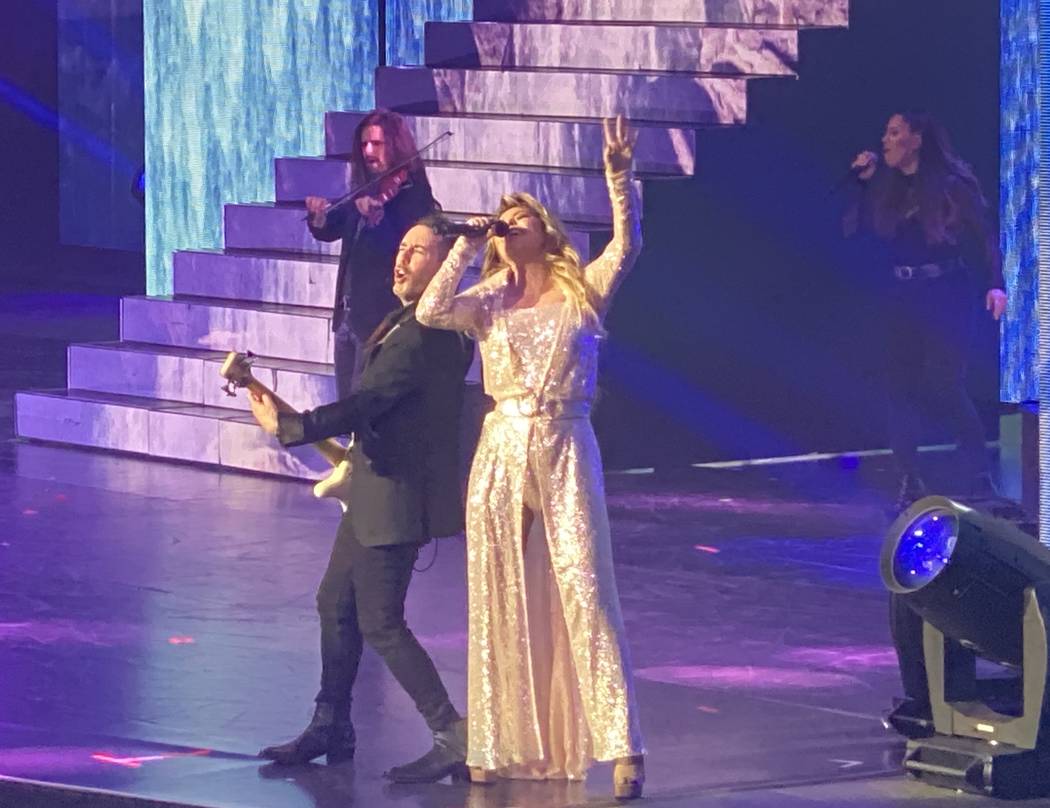 How’s this going to go down? Shania Twain will tell you.

“You can stand during this show,” Twain told her full-house crowd at Zappos Theater on Saturday night. “Get your butts up and out of your seats. This is a party.”

So simple. With equal measures of confidence and comfort, Twain opened her “Let’s Go!” residency this weekend at the Planet Hollywood theater.

The show illustrates Twain’s seemingly seamless range as an artist. While it’s common for music artists to reinvent themselves over the course of a career, Twain manages it between numbers.

She opens with a song indicative of her rock-country attitude, “Rock This Country,” ascending down a red-carpeted staircase, the American flag flying across the LED screens and flames firing from the stage. Twain’s octet of backing dancers, who give the show additional Vegas panache, spend much of the show shirtless and wearing assorted vests.

Given Twain’s Canadian heritage, these gents could be known as the Thunder From Up North.

Stylish video and lighting, and also good use of #wand. @shaniatwain @zappostheater @phvegas

Soon, she’s seated on the fully stocked bar at the Twain Saloon, casually imbibing from a sparkly sippy cup, not knowing if the clear beverage is gin or vodka. “I prefer champagne,” she says. “I’ll drink it through a straw. I need to conserve my lipstick!”

As the creative director of this show, Twain has promised to push the limits of a Vegas residency. It’s a tall order, given the investment and imagination in the ongoing Gwen Stefani and Christina Aguilera productions. But Twain did her groundwork, landing on Zappos Theater specifically because of its party atmosphere (including its standing pit at the front of the stage) and “gentle rake” that allows her to look her fans at close to eye level.

As a producer, Twain relishes such ode-to-Vegas video elements as tumbling dice and spinning slot reels, with fake cash showering the crowd at the jackpot moment. She swaps out her costumes six times — a full golden gown is especially eye-popping — without sacrificing the show’s crisp pace. At one point, the backing dancers wear a similar style of LED-trimmed suits used in “Michael Jackson One” at Mandalay Bay.

The set list covered the span of Shania’s career, a musical serpentine through “Up!” “That Don’t Impress Me Much,” “Any Man of Mine,” and “Forever and for Always.” She nodded to her most recent release, 2017’s “Now,” with the title track and “Life’s About To Get Good.” Click here for the full set list.

Twain dials it down to introduce her pet pooch, Melody, who reclines on a lounge and (metaphorically) gobbles up the scenery. The moment hints to Twain’s “Still The One” show at the Colosseum from 2012-2014, when she invited a horse onstage to sing the show’s title number.

Twain also invited a quartet of fans onstage for a saloon dance. Later, she corralled a couple to a candle-lit table for “From This Moment On.” Twain ends in a flourish, and not bothering with an encore, for “Man! I Feel Like A Woman!” in an all-black ensemble replete with a top hat as her dancers wore white tux jackets and matching hats. Formal and casual, all at once.

Twain showed her ease onstage throughout, at one point using a magic wand to flip away the hair falling into her face (the use of the prop might or might not have been inspired by her friendship with Carrot Top).

Midway through the show, she joked that she had began her recording career at age 8, or “22 years ago!”

She laughed, saying, “I failed math! I failed math twice, actually. I did graduate eventually. But it doesn’t matter now!”

True. For Shania Twain and Las Vegas, it all adds up.