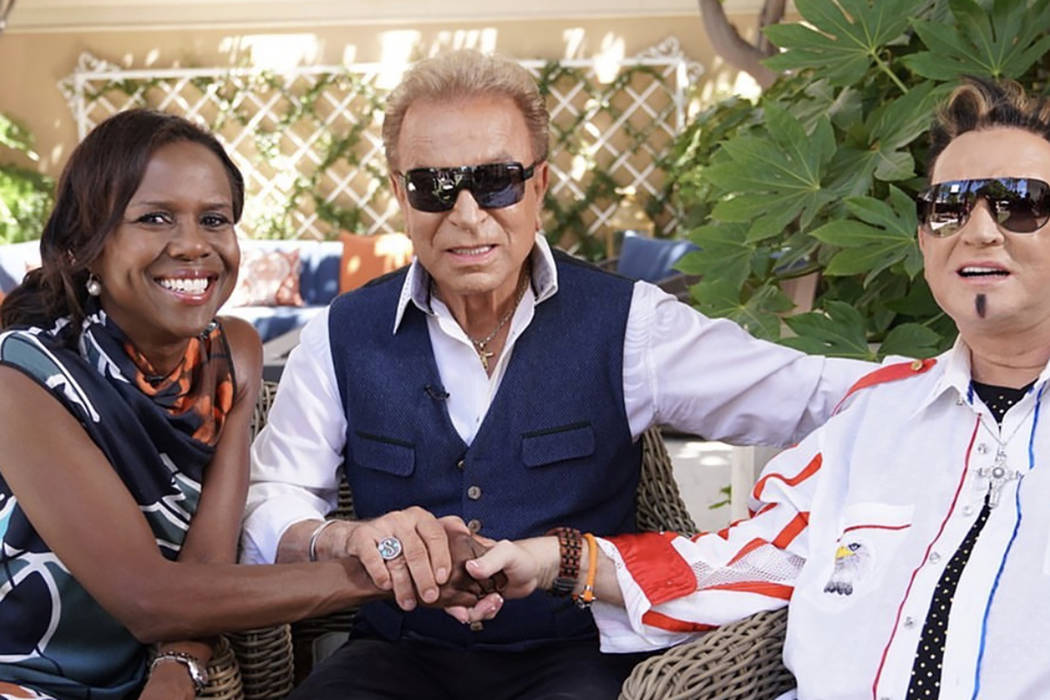 Siegfried and Roy meet with "Good Morning America's" Deborah Roberts at the Secret Garden at the Mirage on August 4, 2019. (Kirvin Doak Communications) 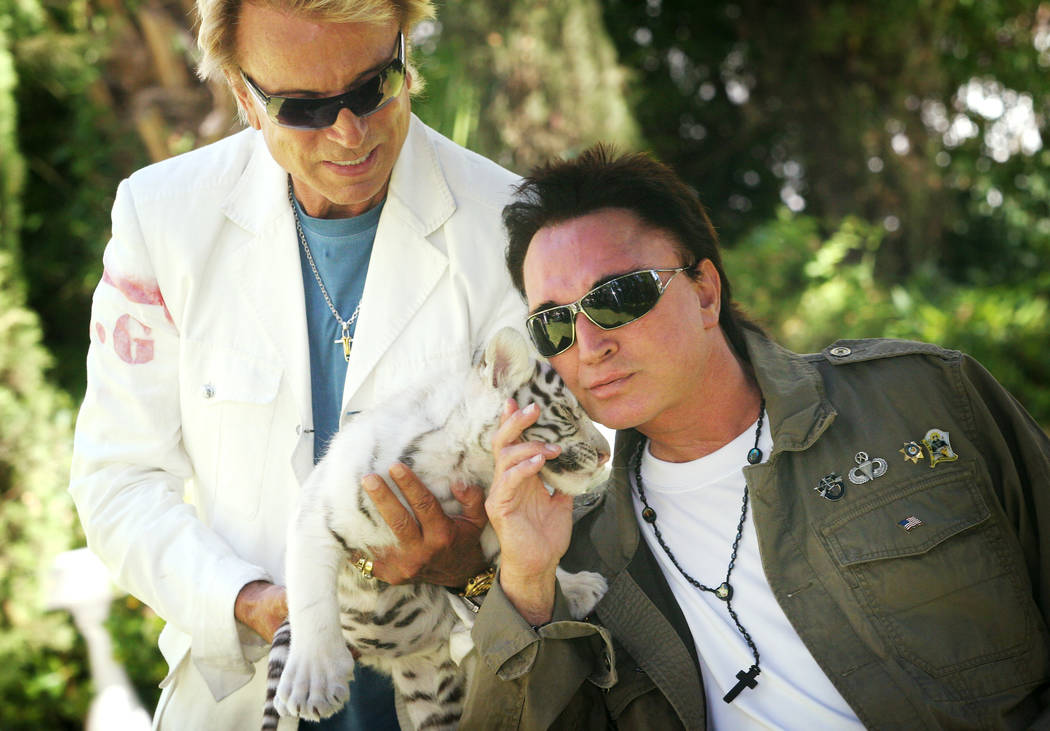 Siegfried Fischbacher, left, stands next to his show business partner Roy Horn as they introducing one of their tiger cubs to members of the media during a press conference at the home on Thursday, June 12, 2008, in Las Vegas. (Jason Bean/Las Vegas Review-Journal) 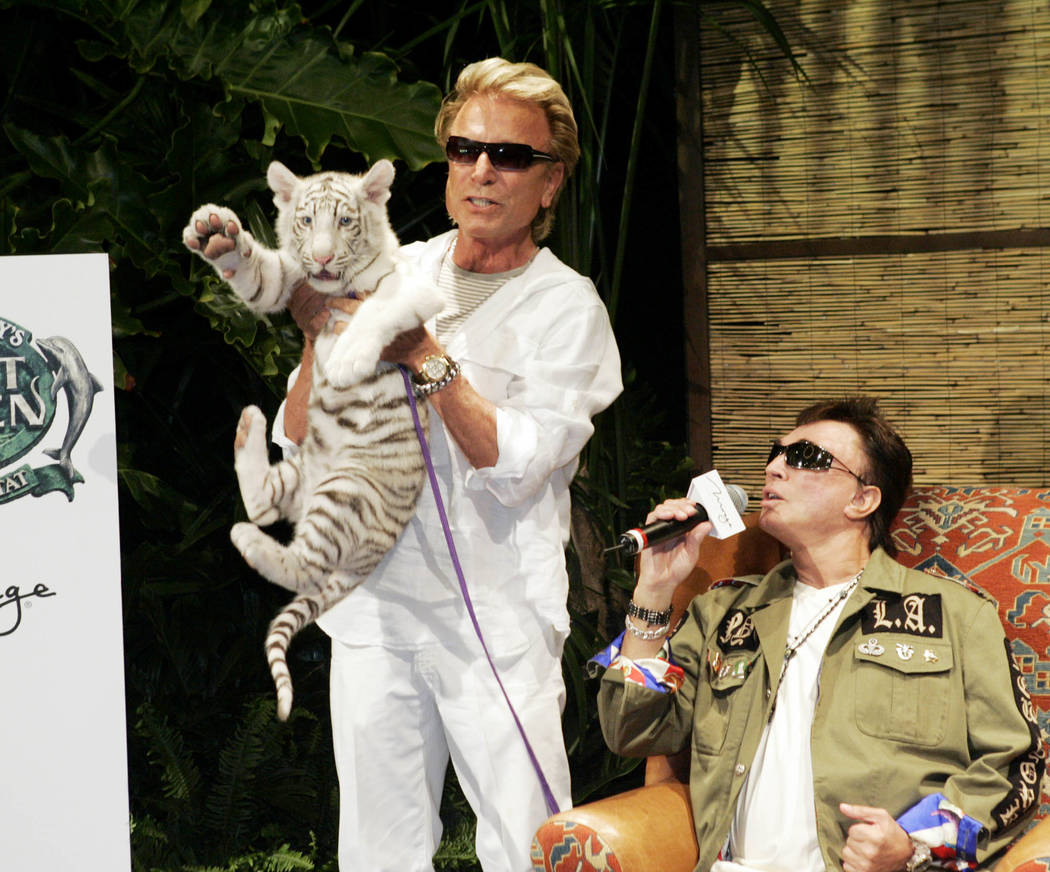 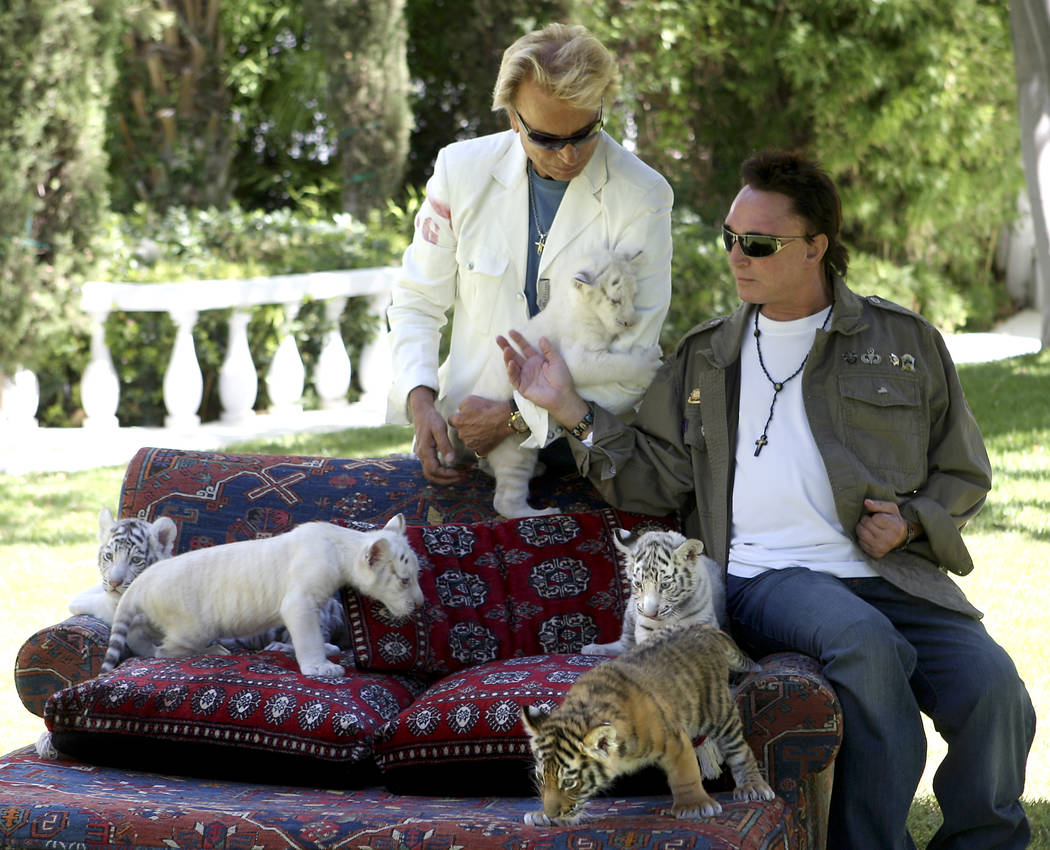 Siegfried Fischbacher, left, stands next to his show business partner Roy Horn as they introducing several tiger cubs to members of the media during a press conference at the home on Thursday, June 12, 2008, in Las Vegas. (John Gurzinski/Las Vegas Review-Journal) 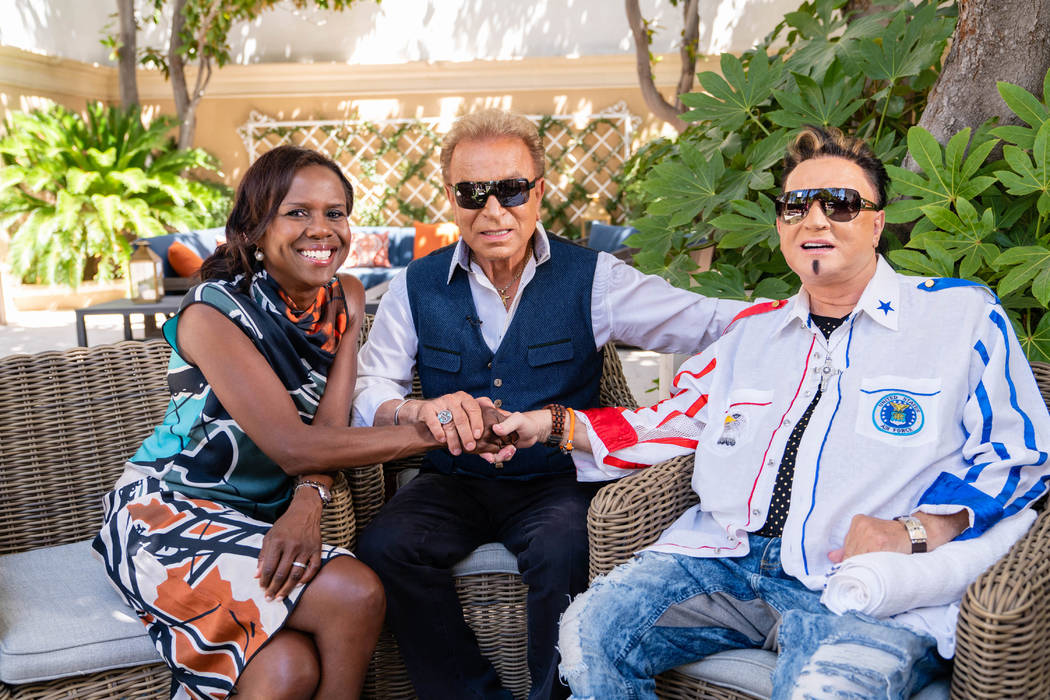 During a weekend reunion of many of their cast members over the decades, Siegfried and Roy have dismissed the account of the trainer who has claimed Roy Horn’s actions led to the incident that led to the end of the show.

Siegfried and Roy were interviewed by “Good Morning America’s” Deborah Roberts on Sunday at the Secret Garden at the Mirage. The first segment of that session aired Tuesday morning on the ABC program. A longer version, to include sit-down sessions with such confidants as the show’s “Evil Queen” Lynette Chappell, airs in September on “20/20.”

In March, former animal handler Chris Lawrence told Hollywood Reporter that Horn’s mishandling of the 400-pound white tiger Mantecore triggered the assault on the legendary entertainer on Oct. 3, 2003. Horn nearly died after the incident, the record-show was closed immediately, and the performer has been rehabilitating ever since.

The duo have long said Horn suffered a stroke onstage and the big cat dragged him away as a protective act. Horn fell, “Then Mantecore went on top of him. And he looked around,” Siegfried said on “Good Morning America,” reiterating the same version of the story the duo have told for years.

Mantecore then clamped on Horn’s shoulder and neck and dragged him from the stage. The duo have steadfastly called the episode an “accident,” eschewing “attack” or “mauling.”

As for Lawrence’s account that a weakening relationship between Horn and the white tigers led to the incident, Siegfried told Roberts he has “no idea” why the ex-employee told his story. Lawrence has suffered from PTSD since the event, though he does keep S&R mementos in his home in Orlando, Fla.

“He had problems with his life anyway,” Siegfried said of Lawrence in the taped interview. It was ABC’s first sit-down with the duo since they reunited for a last onstage appearance in February 2009 at the Keep Memory Alive Power of Love gala at the Bellagio.

Siegfried and Roy were the focus of three events over the weekend, drawing more than 160 former cast members of their headlining show at the Frontier, their tour of Japan and run at the Mirage. Friday the crew met for cocktails at the Italian American Club, Saturday it was a formal event at Ron DeCar’s Event Center, and Sunday was the party at the Mirage.

The cast members recalled the dozens of dancers hired in the show, and the grand scale of S&R’s production in their Las Vegas heyday. Their 10-month tour of Japan in 1987, highlighted by an elephant act, required four 747s to transport the full stage operation.

Todd Dougall worked with the duo since 1969 when they were a side act in “Lido de Paris” at the Stardust. “They were doing big illusions in Las Vegas like nobody had ever seen before,” said Dougall, who moved with the duo to their first headlining show, “Beyond Belief,” at the Frontier in 1981.

“We had the largest tent ever for a production show, and it was a big challenge for our crew to deal with a show like this,” Dougall said. “I used to tell my crew that they are perfectionists, for sure, and maybe to a fault, But the entire production was their lives, and it was everything they wanted to do from the time they got off the ship in America. Because of that perfectionism, they had great success.”

Bette Gaines-Snyder was a dancer from the Frontier, to the Japan tour, to the Mirage.

“My favorite part of being in the show was playing the Witch Doctor’s Wife, a role just for the you,” I got to be one-on-one with Siegfried, I got to bring the elephant back. I got to play that role at the Mirage, which was a great experience with the animatronic dragon and all these elements designed just for you.”

Wayne Murphey was company manager and vice-president of operations on the S&R show at the Mirage, working for Feld Entertainment, the show’s producers.

“The scope of the show was ground-breaking in so many different ways,” Murphey said. “They broke ground with a high ticket price and making money with that high ticket prices. You sat there in a room that cost $50 million to build out, watching a show that made a lot of money. The technology we had was unbelievable, the scale was incredible — we had 56 dancers in the show at the Mirage. Siegfried and Roy changed the way you looked at shows in Las Vegas.