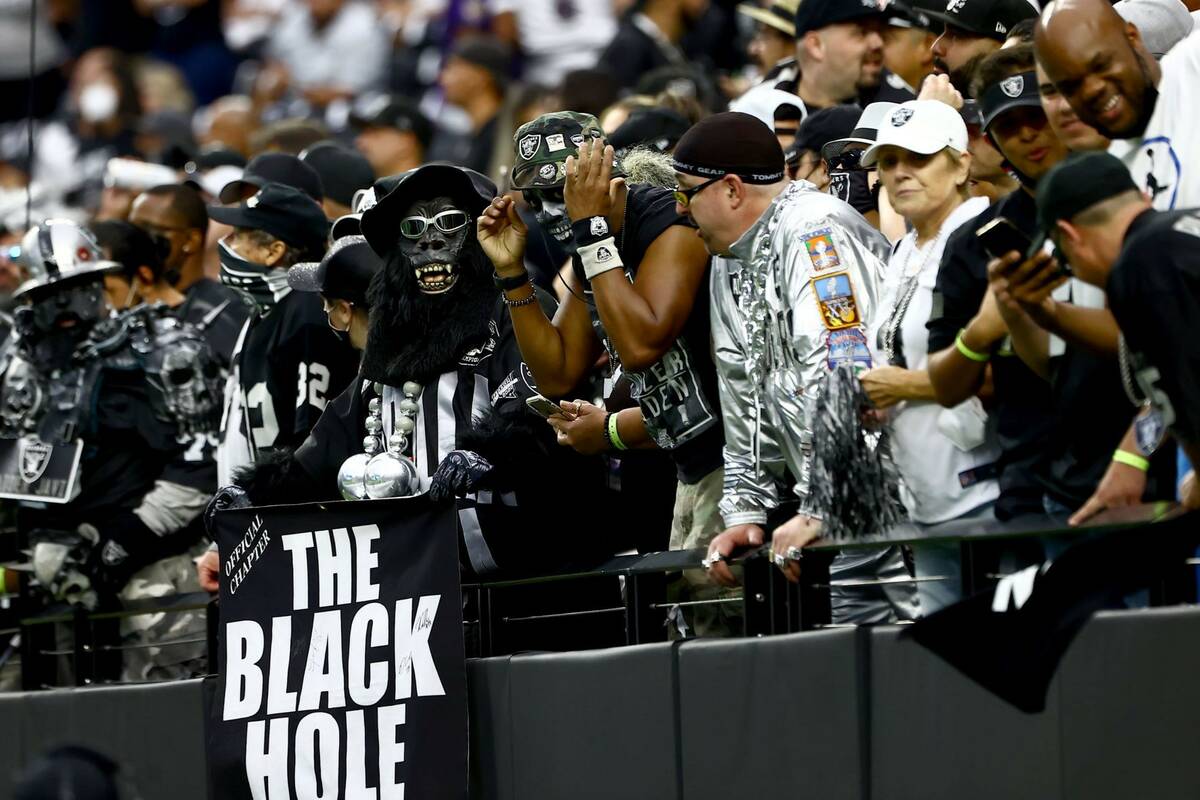 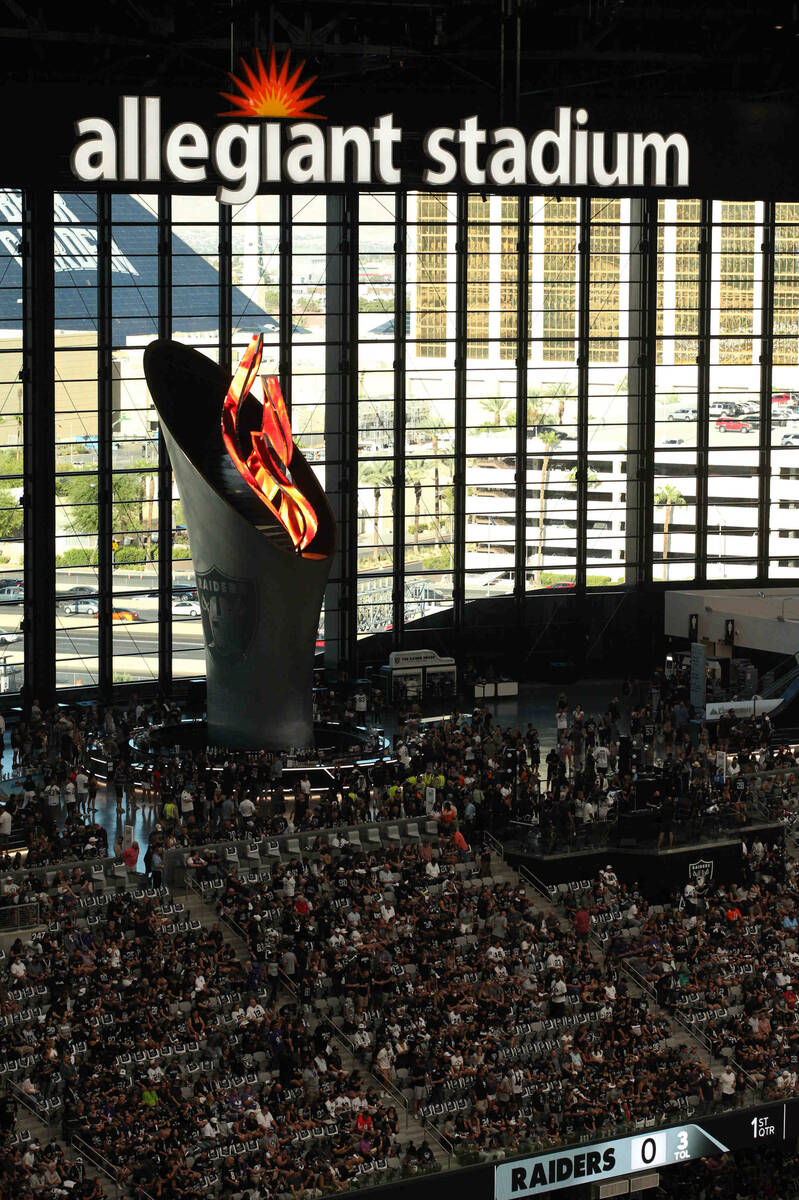 It was about time for “Monday Night Football.” But Nevada Gov. Steve Sisolak was looking to a Super Bowl Sunday in the not-so-distant future.

“To have the first Monday night game of the year in Las Vegas is huge, in terms of how many people it brings and the exposure across the country,” Sisolak said prior to Monday night’s Raiders-Ravens season opener at Allegiant Stadium. “And you will see a Super Bowl here within a couple of years. There is definitely no doubt in my mind, and the exposure that the state and Las Vegas get will be immeasurable. It will be unbelievable.”

The Raiders beat the Ravens in an overtime thriller.

Now we have it. Drink it up. These #Vegas pro sports teams know how to open a show. What a night. @Raiders #RjNow @reviewjournal #Raidernation #Raiders @AllegiantStadm pic.twitter.com/9FE00sxFHh

The city’s relationship from even a decade ago has turned upside-down. Sisolak remembers well the days when the NFL wouldn’t even allow a Las Vegas commercial to air during the Super Bowl.

“They wouldn’t even take our ads,” Sisolak recalled. “Now, we’re going to have a game here tonight, which is a great feeling.”

Sisolak also referred to the crush of fans of opposing teams taking up seats at Allegiant Stadium. Away from the game, they are not the enemy. They are, by definition, tourists.

“We root for the Las Vegas Raiders, but the teams that come in here have a lot of fans who aren’t just here for the game, they are here for everything else Las Vegas has to offer,” Sisolak said. “They are extending their stays, they’re staying in our hotel rooms, putting heads in beds, as we like to call it. They are spending their money here, and that’s a good thing.”

Sisolak was at the game as a fan, or in “civilian” mode, wearing a black Raiders golf shirt and black slacks. He has yet to take on a formal, ceremonial function at Allegiant Stadium since the Raiders have been running at full capacity. Former Gov. Brian Sandoval, now president of University of Nevada, Reno, lit the Al Davis Memorial Torch just before kickoff.

But Sisolak was originally deep in talks to bring the Raiders to Las Vegas dating to his days on the Clark County Commission.

“I look back on the meetings we had at the Stan Fulton Building on the UNLV campus, and talking about whether this would even be a possibility,” Sisolak said. “We went through an awful lot to get here. I was nervous, but I wasn’t skeptical. (Raiders owner) Mark Davis just kept his head down and kept moving forward. The construction workers deserve so much of the credit for finishing this project.”

Sisolak allowed the stadium’s ingress and egress concerns. But he was quick to add that such concerns are widespread for new facilities.

“There are always challenges with parking and traffic, but I’ve been to stadiums all over the country, and every stadium presents its own unique challenges, whether it’s parking, whether it’s traffic, whether it’s foot traffic,” Sisolak said.”Downtown areas could have congestion. They picked a good location, and I think that you’re gonna see this area develop around here a lot more as time goes by in terms of a district with food and dining and taverns. It’s going to be nice.”

Sandoval swept into town for his ceremonial moment. As governor, he signed the bill that authorized the stadium’s funding.

A talented politician with an innate ability to work a room, Sandoval was asked if he has ruled out another run for public office.

“Yes. I mean, right now, I’m loving my job, and I’m focused on it,” said Sandoval, who held office from 2010-2018. “Hopefully I’ll continue to serve the university as long as they’ll have me. We have over 21,000 students, and I enjoy helping them on their life’s journey to become whoever they want to be. For me, it continues to be public service.”

The first NFL game Sandoval ever attended was the Oakland Raiders’ 24-21 victory over the New England Patriots at the Oakland Coliseum in December 1976. The Raiders went on to beat the Minnesota Vikings 32-14 in Super Bowl XI. He was a student at Little Flower School in Reno.

“I’m dating myself, but I just remember we were down in the Bay Area for a basketball tournament, and eighth-grade coach was able to arrange tickets,” Sandoval said. “I know I went to one other Raider game, too, so my NFL games are the Oakland Raiders and now the Las Vegas Raiders.”

*Ice Cube and Too Short turned up at halftime for a run through “Raider Colors,” their new release also featuring Rayven Justice and DJ Nina 9. The song is a tribute to the Raiders’ history through Oakland, L.A., back to Oakland and now Vegas.

*Cube sported a No. 21 Cliff Branch jersey. So did Carlos Santana, in his preseason performance three weeks ago. Branch and Davis were very close friends, leading to speculation that every halftime performer would wear that number. But we’re reliably told that, thus far, it’s a coincidence.

*Gladys Knight sang the national anthem, then sat next to Davis for a time during the game. The entertainment legend said, “For them to think of me for such an important moment in their history is so amazing … I’m so grateful to have been a part of this.”

*Superstar DJ and longtime Vegas resident headliner Steve Aoki performed during the pregame, with the teams announced by the ever-demure (cough) Bruce Buffer. The announcer’s jacket, a happy mess of silver and black, should be displayed somewhere in Allegiant Stadium.

*Lil Jon continues to build a second career as a fan of Vegas professional sports teams. A consistent presence at Vegas Golden Knights games, the rap star was featured in a quick quiz of who was shouting, “Go Raiders!” Fortunately, he was physically present — and holding a shot of something — to scream at the crowd.

*Astute Vegas entertainment observers noted Rockie Brown’s first appearance with David Perrico’s Raiders House Band at Allegiant Stadium. A killer singer, Brown has established an inspired recording career with her partner, Jason Tanzer. She also fronts Velvet Elvis (which also features Tanzer, on guitar) on the Fremont Street Experience, and is a swing in “Sexxy” at Larry Flint’s Hustler Club. Mark Pardy (The Jets, “Bat Out of Hell” on Broadway, and the late, great “World’s Greatest Rock Show”) was on drums, and Mat Schumer (baritone sax) also for the first time at Allegiant.

*The 40-minute pregame performance has become a thing with Perrico’s band. We are suggesting a name for the area behind the stage, at the base of the torch. Like, the Torch Club or Club Raider or something. The place was slammed, groovers plentiful, on Monday night.

We discovered a Nevada elected official is a shareholder for the Green Bay Packers: Sisolak, who is originally from Milwaukee.

“That’s how they finance their stadium. I have one share,” Sisolak said. “I think it was $399, versus $599 and you can have your certificate framed. I have no voting rights, but they send me a report every year.”