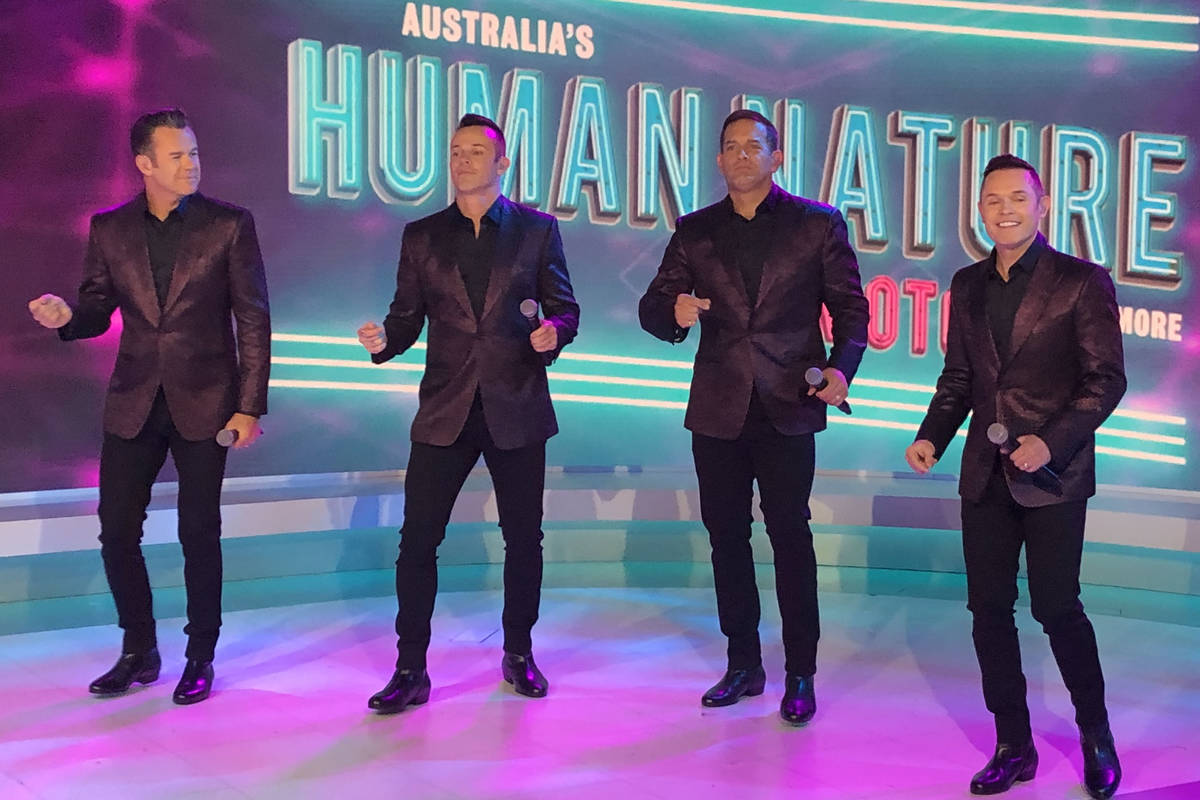 Sometimes you can’t win for losing. Or for singing and dancing, either.

The country’s favored foursome of Andrew and Michael Tierney, Toby Allen and Phil Burton drew a healthy crowd that was seated just hours before a midnight mask mandate went into affect in the state of North South Wales.

Absent the mandate, most in the crowd went without the masks. Australian media seized on the images of that audience. We note that none of the blowback about the performance suggested Human Nature itself was responsible for their fans’ behavior.

Regardless, one attendee, identified as Ian, was quoted in the publication The Australian, “Mate it was jam packed in the auditorium there wasn’t a spare seat in the house there was no distancing between people inside, you were touching elbows with the person next to you who you didn’t know.” He added, “I wore a mask so I felt reasonably happy about that part of it.”

The Australian headline on that story, which also referenced a large wedding in the reason, called out, “Coronavirus Australia: Anger at packed Human Nature concert, Sydney wedding with 700 guests.”

More explosive, from Daily Mail Australia, “Shocking footage shows hundreds of Sydneysiders packed into a concert just hours before masks became mandatory — and hardly any have their faces covered.” (and I hadn’t known the term for a Sydney resident was Sydneysider.)

On the day of the show, New South Wales reported 19 new COVID cases in a region that had effectively suppressed the virus. The Sydney Coliseum Theatre told Daily Mail Australia that it impressed upon audience members to wear a mask even though it was not mandatory at the time.

‘We strongly recommend masks are worn by any patron 12 years and over. If you do not have one, masks can be purchased at any of our bars for a nominal fee,” officials wrote in an e-mail to ticket holders.

Two shows in Human Nature’s tour were cancelled for the pandemic. The group also was booked at Adelaide’s Bonython Park on Friday, and Melbourne’s Sidney Myer Music Bowl on Saturday. Those shows were spiked because of border closures in the country.

Theater operator Richard Errington said the venue was within its seating requirements. “The theatre was not full, the capacity was just under 2,000 and there was just over 1,200,” he told the Australian. “We’ve been approved for 75 per cent seated capacity which must be ticketed and seated.”

The band still is a top draw in their homeland, of course, and had closed a monthlong tour before which all four members quarantined for two weeks. Allen was later ordered to quarantine after an exposure on a flight. He missed two performances.

“We love our fans,” Andrew Tierney said in a text, after returning to Vegas on Wednesday morning. “Now we’re back, we are looking into future plans for Vegas and beyond for HN.”

In those plans are a return to the stage in Vegas, the venue and even lineup to be determined (Burton has moved back to Sydney). Human Nature also plans a return to Australia in August. Those dates remain on the books, despite fans’ conduct last weekend. As Andrew Tierney said, “Nothing has changed at this stage.”