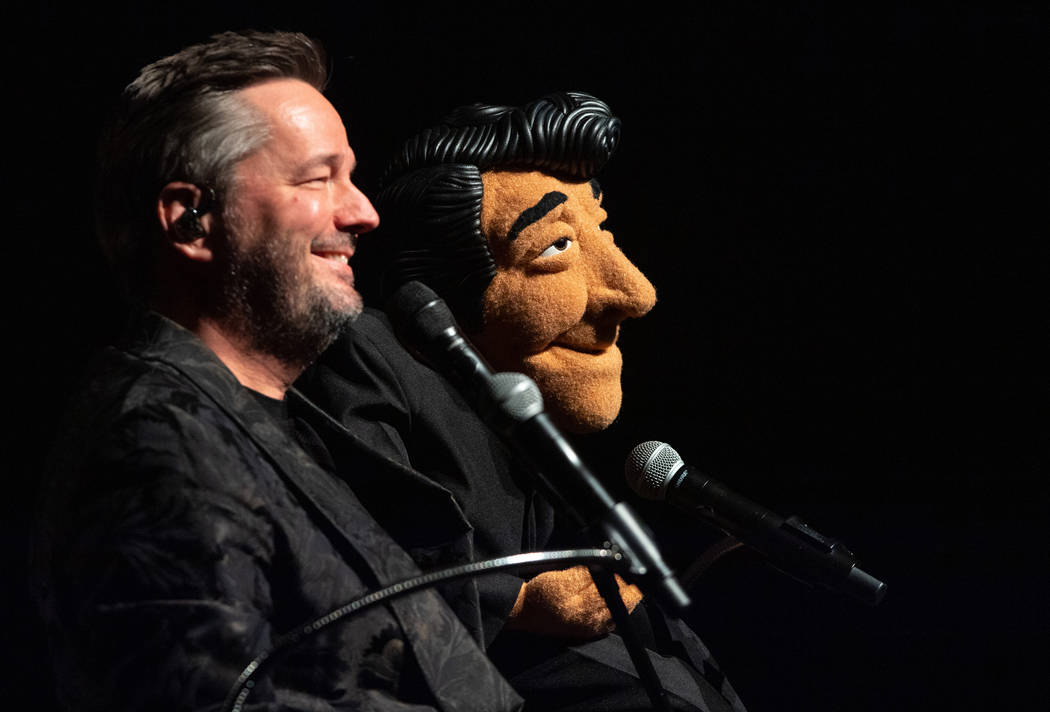 Terry Fator performs with his Dean Martin puppet, part of his show, “An Evening With the Stars,” at The Mirage. (Tom Donoghue) 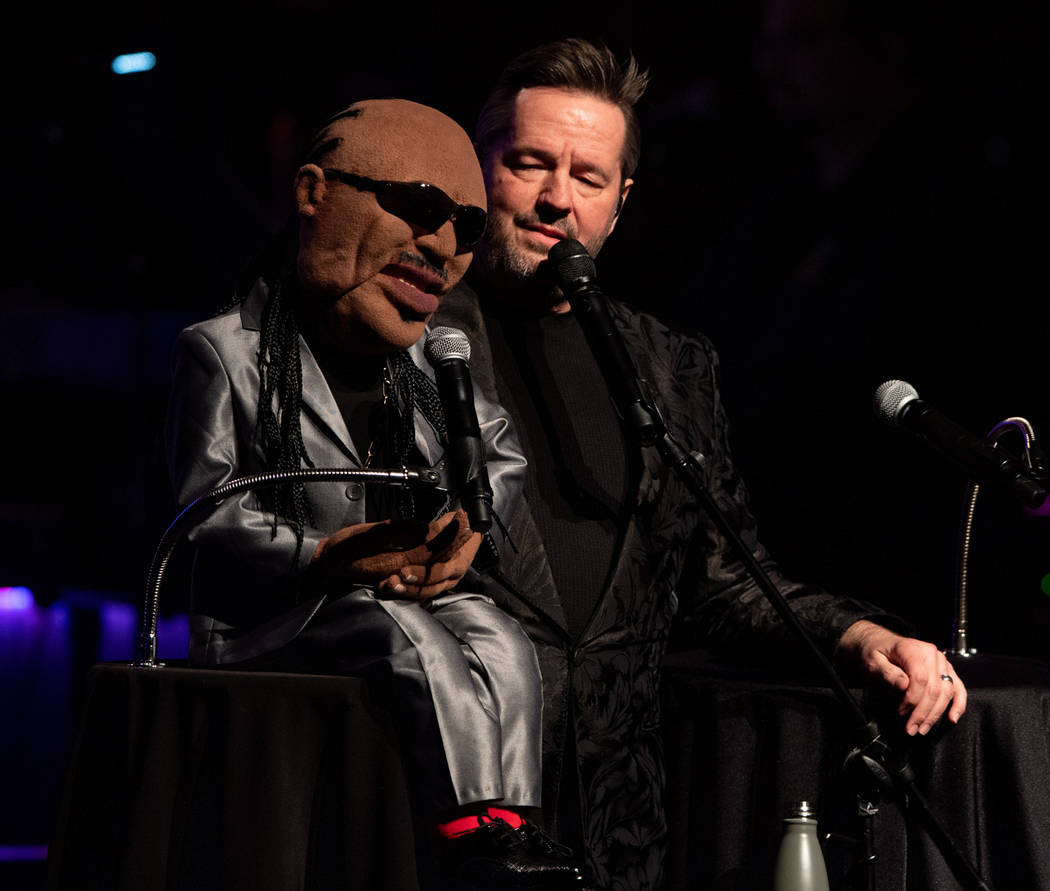 Terry Fator performs with his Stevie Wonder puppet, part of his show, “An Evening With the Stars,” at The Mirage. (Tom Donoghue) 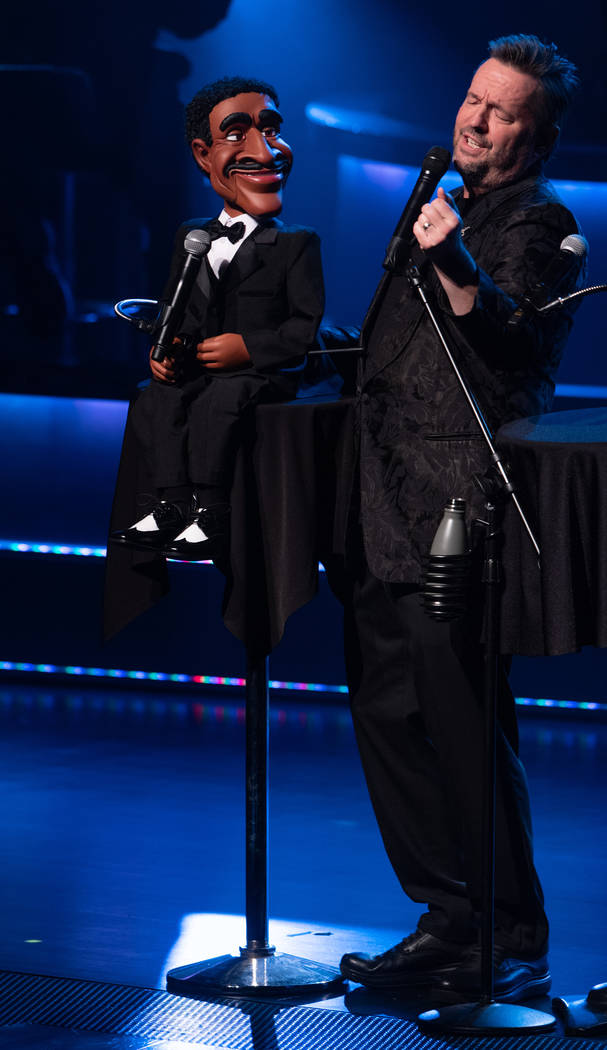 Terry Fator performs with his Sammy Davis Jr. puppet, part of his show, “An Evening With the Stars,” at The Mirage. (Tom Donoghue)

Terry Fator has built a hit show by throwing his voice. But even he can’t simulate an entire band.

Thus, for the past 10-plus years, Fator has famously enlisted A-plus musicians to perform behind him in his stage show at the theater named for him at The Mirage. That is about to change, as Fator is cutting his band effective the end of this month.

Those who were let go, and are now on the market, are highly regarded musicians on the Vegas scene: drummer John Wackerman, trumpet player Tom De Libero, guitarist Jim Buck sax player Steve Dawson and bassist Donnie Castleman. The show will continue with ace keyboardist and Fator’s road sidekick Bill Zappia performing the backing music along with recorded tracks.

Fator, who this spring celebrated his 10th anniversary at The Mirage, told those players the news Thursday night. The band has been part of Fator’s act since Day 1. The musicians have supplied the soundtrack to Elvis impersonator Maynard T. Tompkins and the duets between David Bowie and Bing Crosby and Paul McCartney and Michael Jackson.

Fator, characteristically confident and optimistic, said in a text, “We are trying a new feel and look to the show. Things move fast now, and Bill Zappia has worked so well for my road show that we thought we’d try it for the Vegas show. I’m totally revamping the Christmas show as well. Lots of amazing stuff happening.”

Fator is traveling for a set of road dates beginning Saturday in Tulsa, Okla. He returns to The Mirage on Aug. 26 for the first of the band’s final four performances.

The musicians reportedly took the news with a mix of sadness and happy reflection for a decade-long run. Buck, a well-known musician and part of the Lon Bronson Band, said, “It is sad, but I am so grateful to have been on the same stage for 10 years with some really good people.”

Such moves as cutting live musicians are an indication a show is also cutting costs to survive a drop in ticket sales. Historically, shows like “Peep Show” at Planet Hollywood and “Tenors of Rock” at Harrah’s Showroom trimmed musicians when sales softened.

Also, Fator’s show has turned up on ticket-broker sites such as House Seats and Fillaseat, which offer seats at no cost for select shows for those paying a subscription fee. As recently as Sunday, two longtime House Seats subscribers said Fator’s show has “very rarely” been listed over the years on that site.

As a mitigating factor, many headliners fill venues through House Seats as the market for live entertainment has become tighter for ticket sales. But those same headliners have been reticent to cut musicians, as losing live performers does not typically improve the quality of a show.

Fator, of course, has been the unique headliner that has hired a band when his ventriloquial contemporaries use tracks or don’t use music at all. It’s been a luxury he’s always been able to afford until, apparently, now.