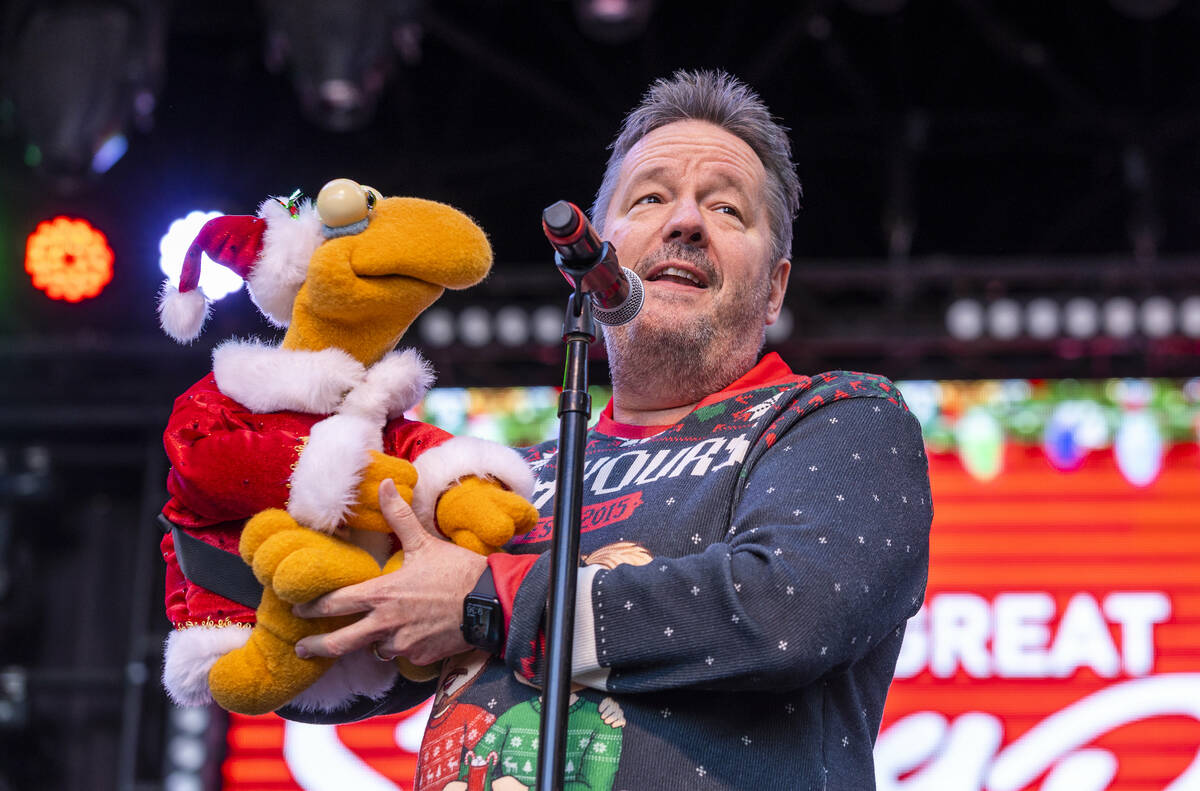 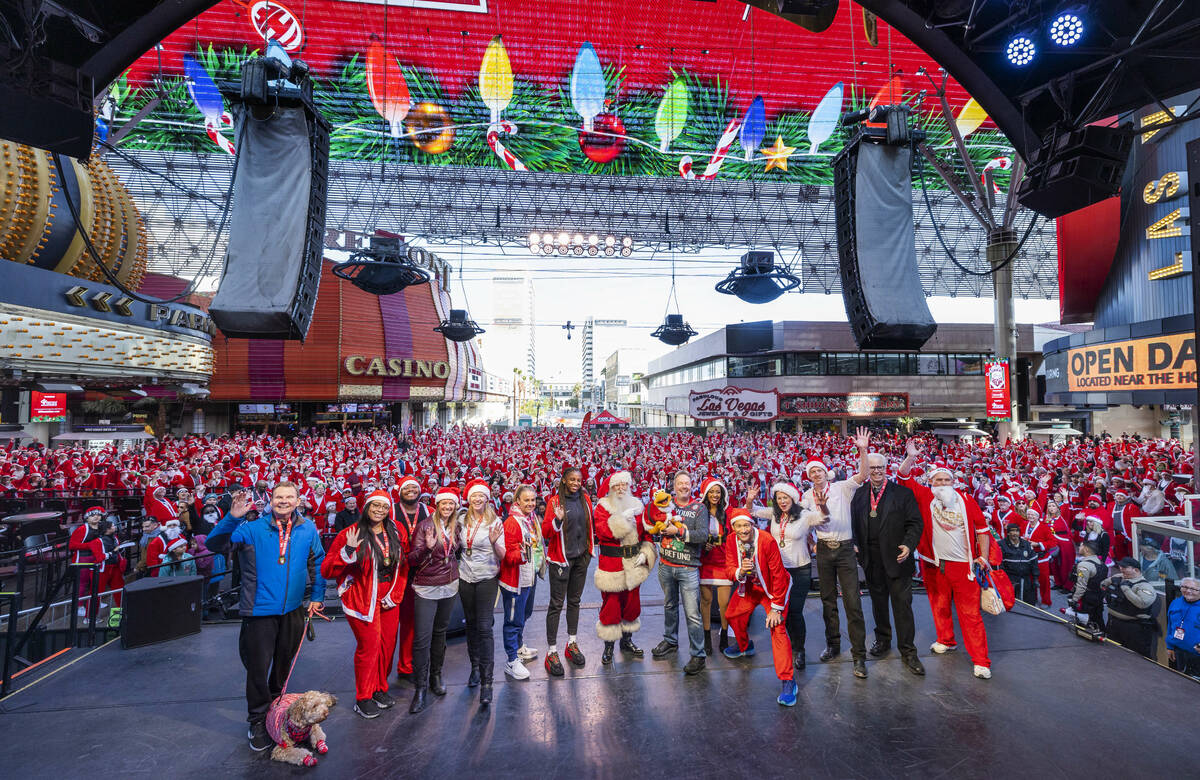 Invited guests and performers gather for a photo with the crowd during the pre-race entertainment at the Fremont Street Experience for the 18th Annual Great Santa Run in Downtown Las Vegas to benefit Opportunity Village on Saturday, Dec. 3, 2022, in Las Vegas. Fator is the Grand Marshal of the 5k course. (L.E. Baskow/Las Vegas Review-Journal) @Left_Eye_Images 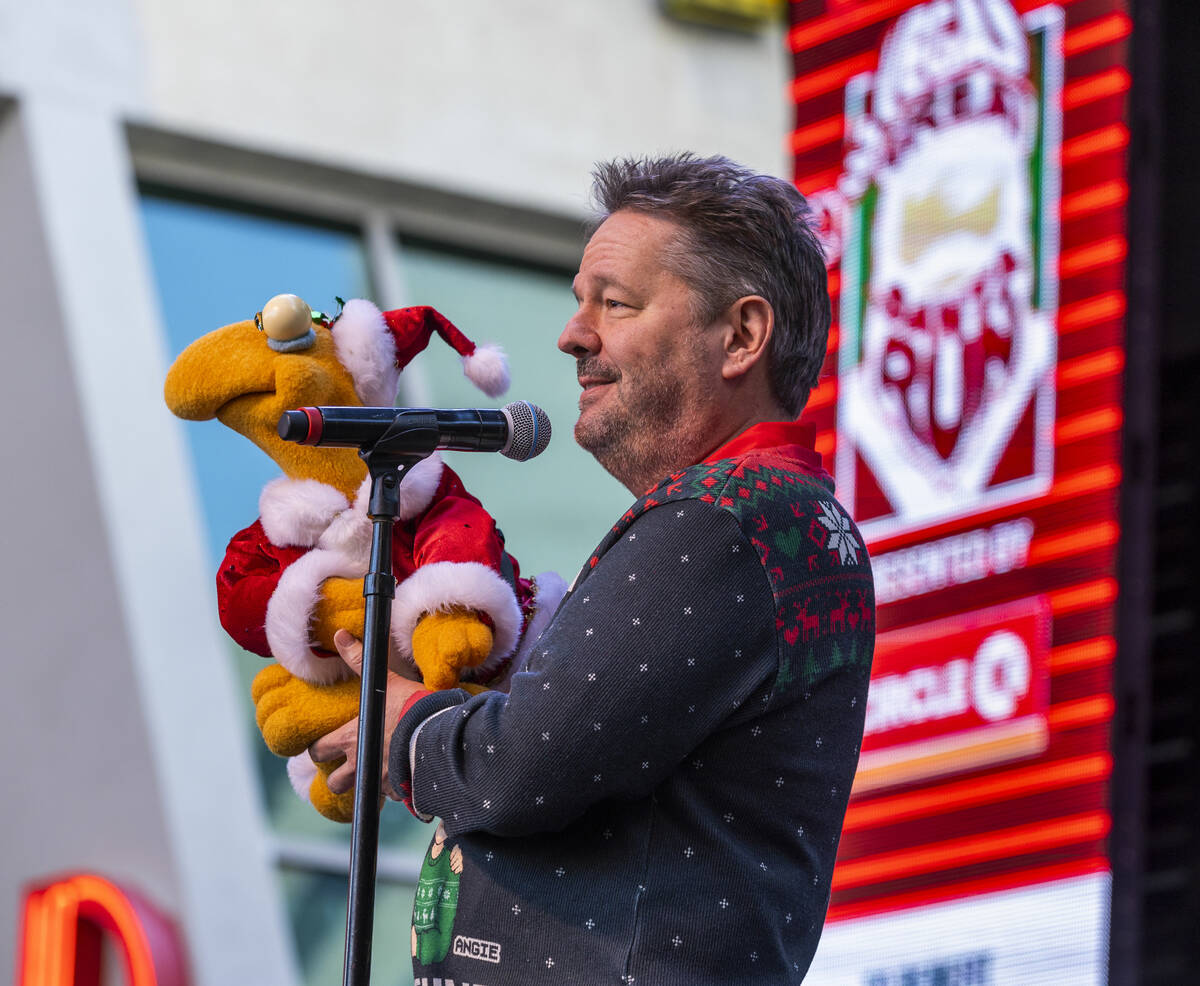 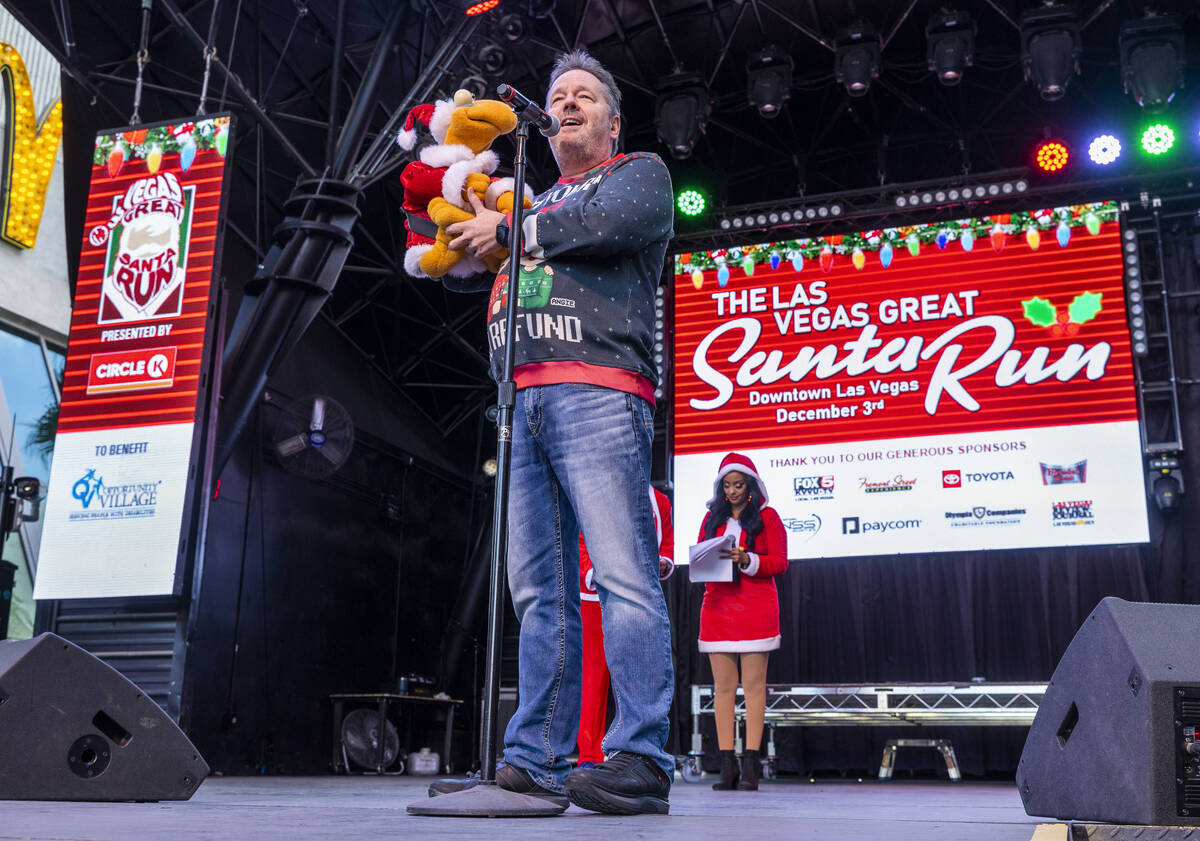 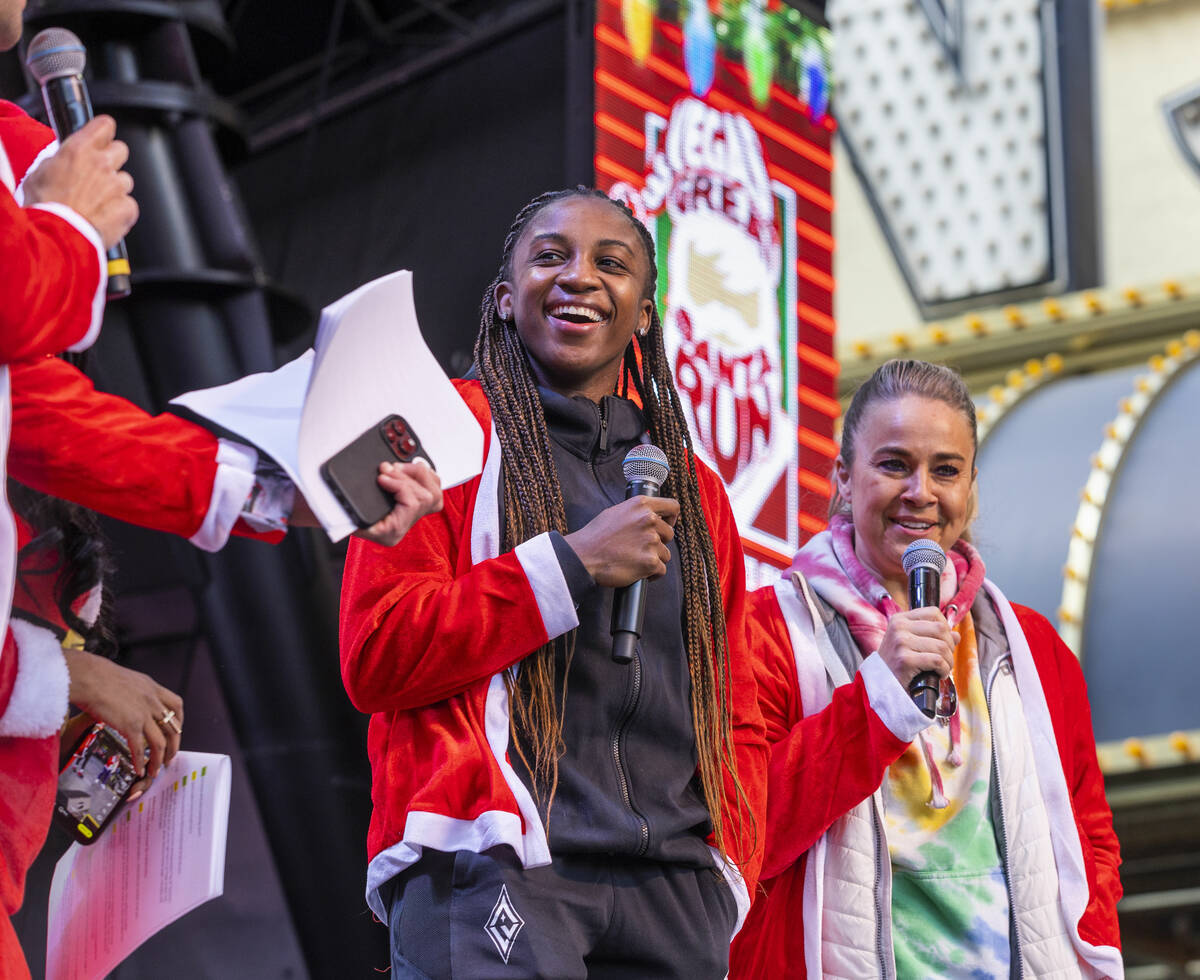 Terry Fator is celebrating Christmas in Vegas, again, alongside his wife, Angie. The couple wear matching, customized holiday sweaters reading, “I’m Yours. No Refund. Est. 2015,” and are shown in cartoon character form across the front.

Fator also revives “The Little Drummer Boy” duet with his Bing Crosby and David Bowie figures. Whether or not ventriloquism is your thing, nobody does what Fator does in his Vegas stage show. The Christmas production runs through Dec. 27, and is at 5 p.m. that day, so the Fators can jet to Greece for a deserved respite.

Fator’s disposition is unshakably sunny, especially this Christmas season. The ventriloquial star is returning to where it all started, “America’s Got Talent: All Stars” starting Jan. 2. Simon Cowell will both executive produce and judge the new show, along with “AGT’s” Howie Mandel and Heidi Klum. Terry Crews hosts.

And Fator, who had exhausted his audience at the theater once named for him at The Mirage, will actually outlive that resort. The Mirage will be relegated to history as its converted to Hard Rock Las Vegas over the next two-plus years.

Meantime, Fator has no plans to go anywhere and is actually tailoring his show for the long term at New York-New York.

“That’s a really funny thought, and I hadn’t even thought of that,” Fator says backstage at the Opportunity Village Great Santa Run, which he co-emceed with Aces coach Becky Hammon. “You know, The Mirage was such a, an amazing thing to happen because it happened exactly at the right time. Had I been on “AGT” the year before, or the year after, it never would have happened.”

Fator opened at The Mirage in March 2009, two years after winning season 2 of “AGT.” The pieces fell into place as Danny Gans left the hotel for the Wynn, while Fator was coming off a sold-out limited engagement at then-Las Vegas Hilton.

Fator’s success has made him a favorite of Cowell, who holds Fator’s long-running stage show as an example of what “AGT” can deliver to the Strip. Cowell has since co-produced “America’s Got Talent — Live!” at Luxor.

Fator is a proud “AGT” alum, and has made several return appearances to the show over the years. But only as a performer, not as a contestant. The “All-Stars” format brings in past champions and series favorites from “AGT” series all over the world.

Fator has been invited to return as a competitor, but notes that his former management team batted back the offer. This time, Fator heard directly from Cowell.

“When he reached out, I said I absolutely want to do it,” Fator says. “But I did not do it to compete. I do not care about the competition at all.”

Then why are we playing?

“I want to start going international, I wold love to do a two-week or European tour, to Australia and Japan,” Fator says. “I want to go Australia, and I would love to go to Japan. That is why I added my Paul McCartney, Elton John, Frank Sinatra and Michael Jackson puppets. They are known around the world.”

Fator is working around his New York-New York schedule. He’s committed to the 400-seat Liberty Loft, long-term. “I’m really still trying to figure out the best way to embrace the space,” Fator says. “It just doesn’t feel like a fit yet, so I’ve started coming up with some really good ideas. When we’re ready to put them in, it’s going to be really, really cool.”

Hammon attended her first Great Santa Run. The Aces are once more taking their position at community events. The team was also well-represented at the Opportunity Village Camelot gala last month. The Aces open on the road — twice — before returning to Michelob Ultra Arena for their home opener May 27.

Star center A’ja Wilson questioned the team’s early schedule on social media last week, asking, “How the hell the champs play on the road the first couple of games of the season?” The Aces’ season opener is at the Seattle Storm, whom Vegas vanquished in the WNBA playoff semifinals.

“Of course, we would like to open at home, but that’s the way it goes. Every every team goes through different things,” Hammon said. “And you know what? I kind of like my team not that happy. They play better when they’re a little ticked off.”

Hammon has adopted a phrase for the Aces’ run to repeat as champs. “Rinse and repeat.”

Friday was nuts — nuts, I tell you! beginning with the Barry Manilow show at 4 p.m. at Westgate’s International Theater, where Joey Melotti played keys. That was the first of two shows as Manilow made up for missing Thursdays’s performance because of an irregular heartbeat.

Then I caught David Perrico’s Pop Strings Orchestra at Myron’s at the Smith Center, where more than 40 musicians and singers took the stage. A venue record. One special guest singer was ex-Raider offensive tackle Henry Lawrence, aka “The Killer,” a three-time Super Bowl champ.

Then I caught Steph Payne and Melotti at Bootlegger Bistro for their 10 p.m.-1 a.m. show. Melotti performed three times Friday (the two Manilow shows and at Bootlegger). And, none other than Lawrence was again one of the guest singers. We can’t be stopped, I tell you.