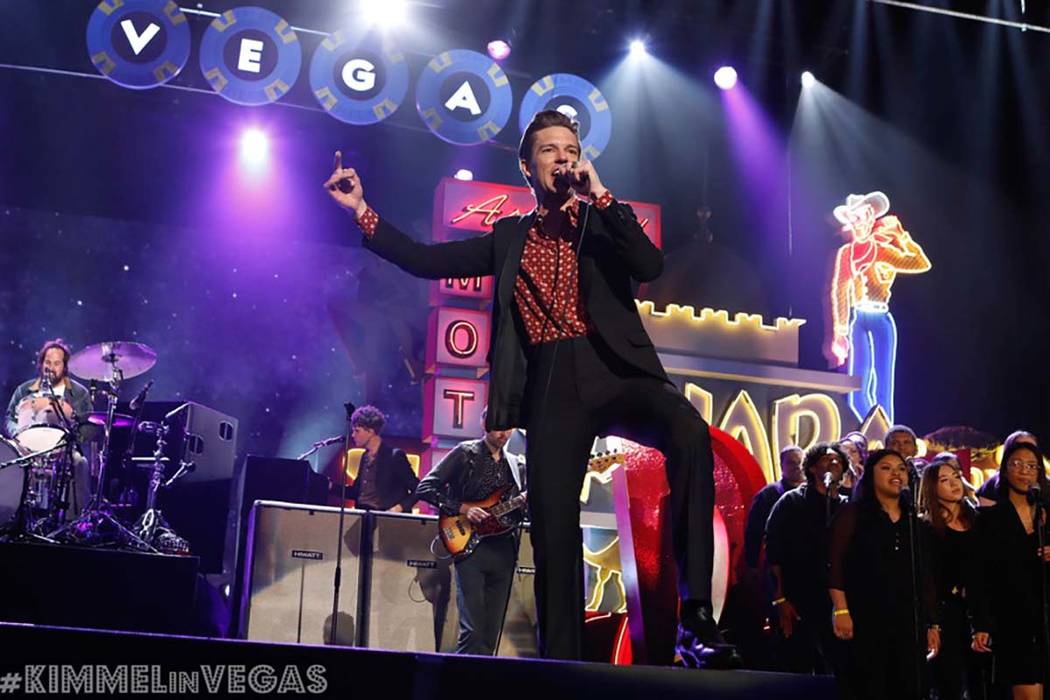 The Killers perform on “Jimmy Kimmel Live!” on Monday, April 1, 2019, in Las Vegas. The late-night TV show is broadcasting from Zappos Theater at Planet Hollywood on the Las Vegas Strip this week. (Robert Loud) 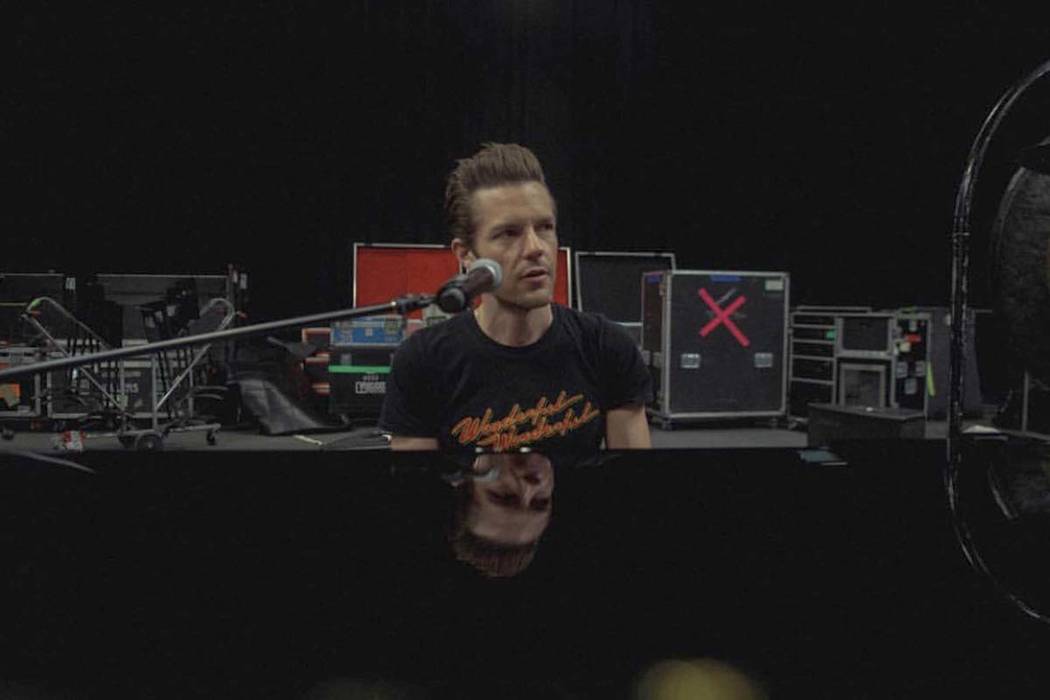 He wasn’t exactly a club DJ, but Brandon Flowers remembers spinning years ago at a mall on the Las Vegas Strip.

Maybe you remember the place. The front man of the Killers does.

“I was a food runner, and a host,” Flowers says, having just finished rehearsing for the band’s appearance tonight on ABC’s “Jimmy Kimmel Live!” at Zappos Theater, which was once Aladdin Theater for the Performing Arts. “It was for about seven months, right after high school. I wasn’t old enough to be a server, but it was a great job.”

This is us rehearsing for tonight, yesterday. #jimmykimmellive

Josef’s is immortalized as the first business to play Killers’ music, the restaurant’s staff serving as the first audience.

“We played our first demo while I was working there,” Flowers says. “I remember putting it in for the chefs and all the other workers. It actually went over pretty well.”

“Mr. Brightside,” “Under The Gun” and “Desperate” were those songs. Of course, “Brightside” took off as one of the the band’s signature anthem.

“It’s definitely the song people gravitate toward,” Flowers says. “It has some sort of weird staying power.”

The Killers’ connection to the property is shared by drummer Ronnie Vannucci, who drove a pedi-cab around Desert Passage.

The band rehearsed its latest single, “Land of The Free,” “All These Things That I’ve Done” and “The Man” off its latest album, “Wonderful Wonderful,” for Monday night’s show. They have also been working on their upcoming album for about five months and are prepping for one of the biggest performances of its career, at Woodstock 50 in August.

The Killers are in the Day 1 lineup with House of Blues headliner and Woodstock original headliner Carlos Santana.

Unexpectedly, The Killers bonded with another iconic artist during today’s “Kimmel” rehearsals. In what initially seemed like an April Fool’s Day prank, they were asked if they could learn James Taylor’s “Carolina On My Mind.”

Taylor, scheduled to open his residency at the Colosseum at Caesars Palace on April 17, was slotted for Tuesday’s show, but fell ill Monday and can’t perform.

The band played a terrific version of the song, good enough to record if they need a cover tune for their next album (they’ve spent the past five months working on the release).

The version recorded today will be performed on Tuesday night’s episode.

“We played that song once, a piece of it, once in North Carolina,” Flowers says. “It’s an honor to play it. It’s a privilege, it’s a classic song but (laughs) I still have some work to do to learn all the lyrics.”

The Killers and Kimmel gave a nod to their respective high schools, with members of the choirs from Chaparral High (where Flowers went to school) and Clark (for Kimmel and Vannucci) joining the band’s performance tonight.

He also brought in the showgirls from “Vegas! The Show” at Saxe Theater at Miracle Mile Shops, just down the mall a spot from Blondie’s — formerly Josef’s.

“Hey, tonight this place is the center of the universe,” Vannucci says. “I’m 20 years old again.”

Kimmel also featured the Killers in August of 2017, capturing a performance from a temporary amphitheater at the entrance of Caesars Palace.

Though still aligned with Las Vegas, Flowers and his wife, Tana, sold their Rancho Circle home about a year ago and have moved to Park City, Utah.

But similar to Kimmel, he always carries some Vegas swagger wherever he goes.

“You can’t shake it. Vegas stays with you,” Flowers says. “Jimmy has taken a shine to us, and we’re fans of his, being from Las Vegas has pulled us together.”

Vannucci, showing off his linguistic dexterity , says, “We definitely have a shared umbilicus with him for a long time, being from Las Vegas. As Vegas gets bigger and bigger, we still share a kinship, and that is cool.”