The Nevada Room is shutting down 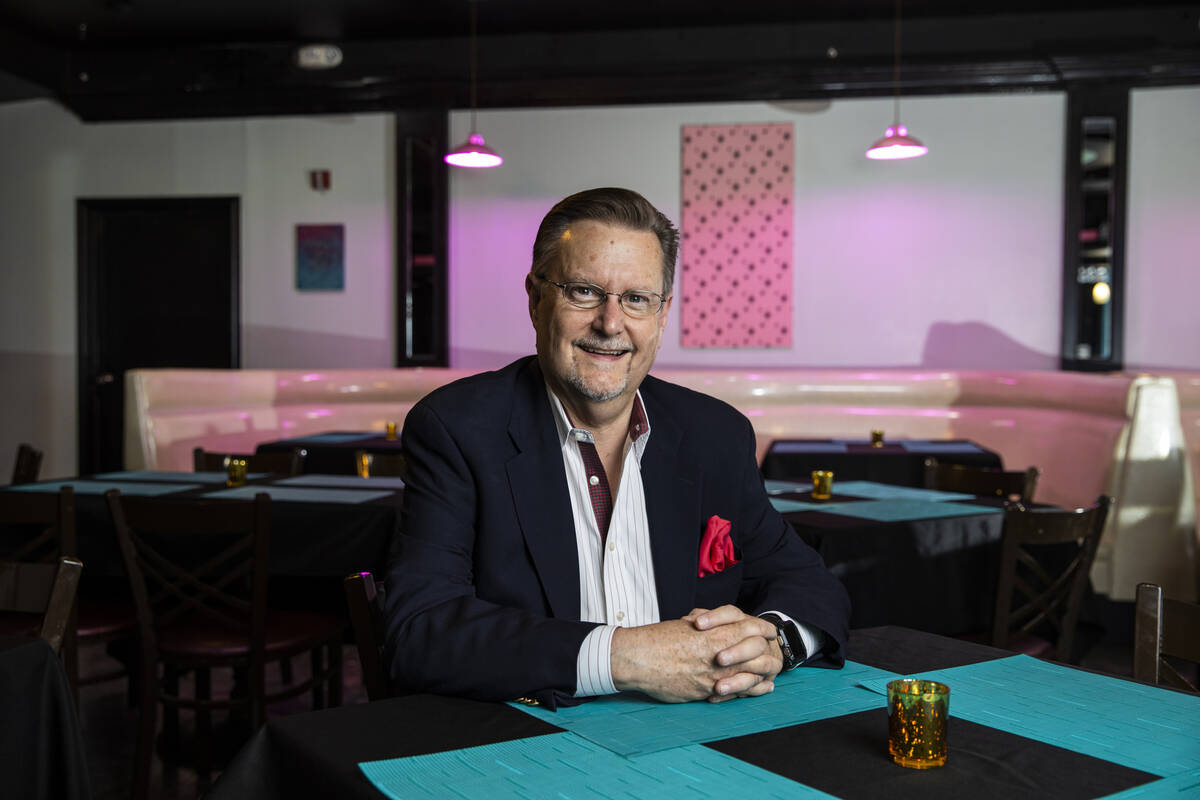 Tom Michel, president of The Nevada Room, poses for a portrait at the venue at Commercial Center in Las Vegas on Tuesday, May 11, 2021. (Chase Stevens/Las Vegas Review-Journal) @csstevensphoto 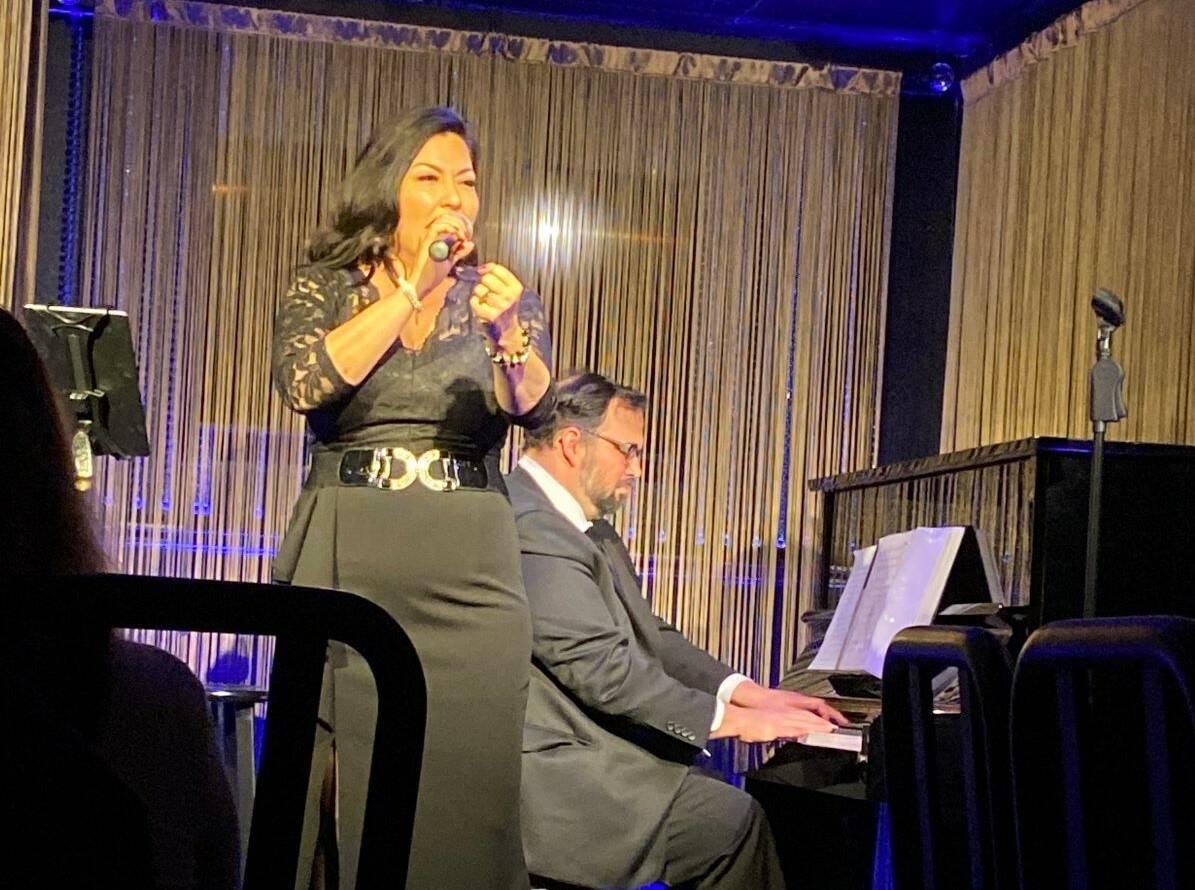 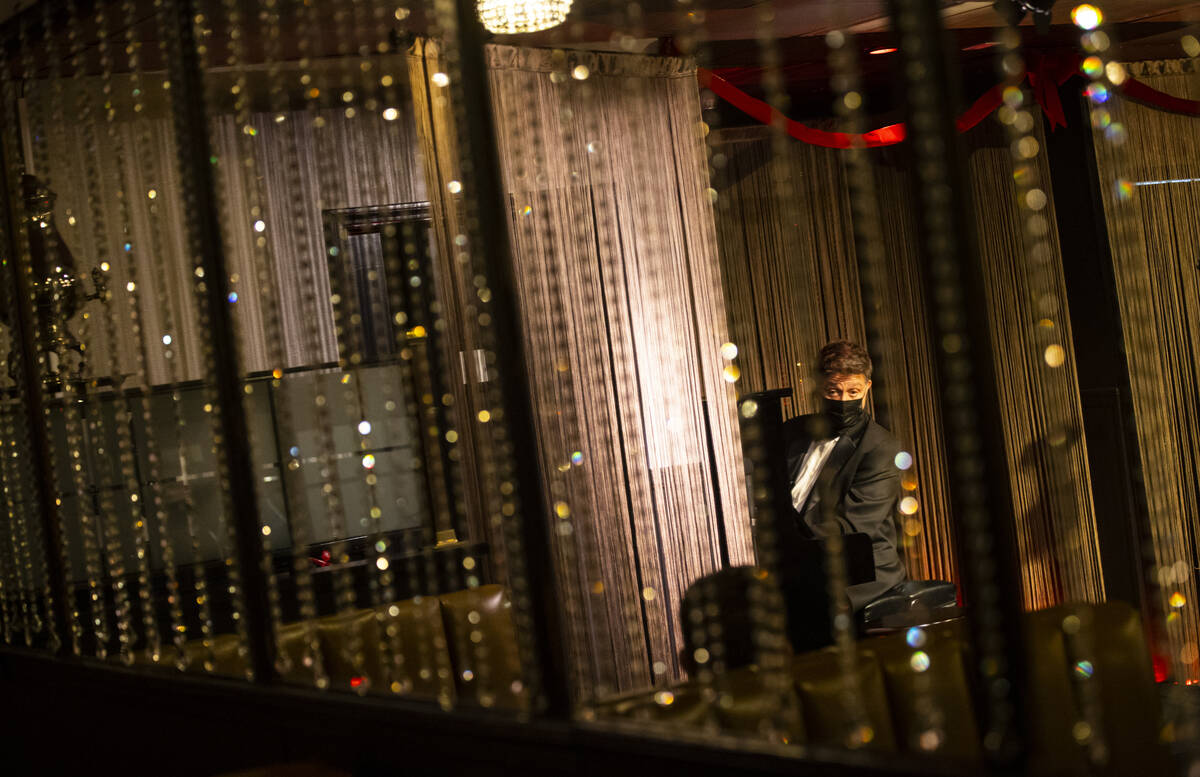 Keith Thompson plays piano during rehearsal for "A Vegas Room Christmas" at The Vegas Room in the Commercial Center off Sahara Avenue near Maryland Parkway in Las Vegas on Tuesday, Dec. 1, 2020. (Chase Stevens/Las Vegas Review-Journal) @csstevensphoto 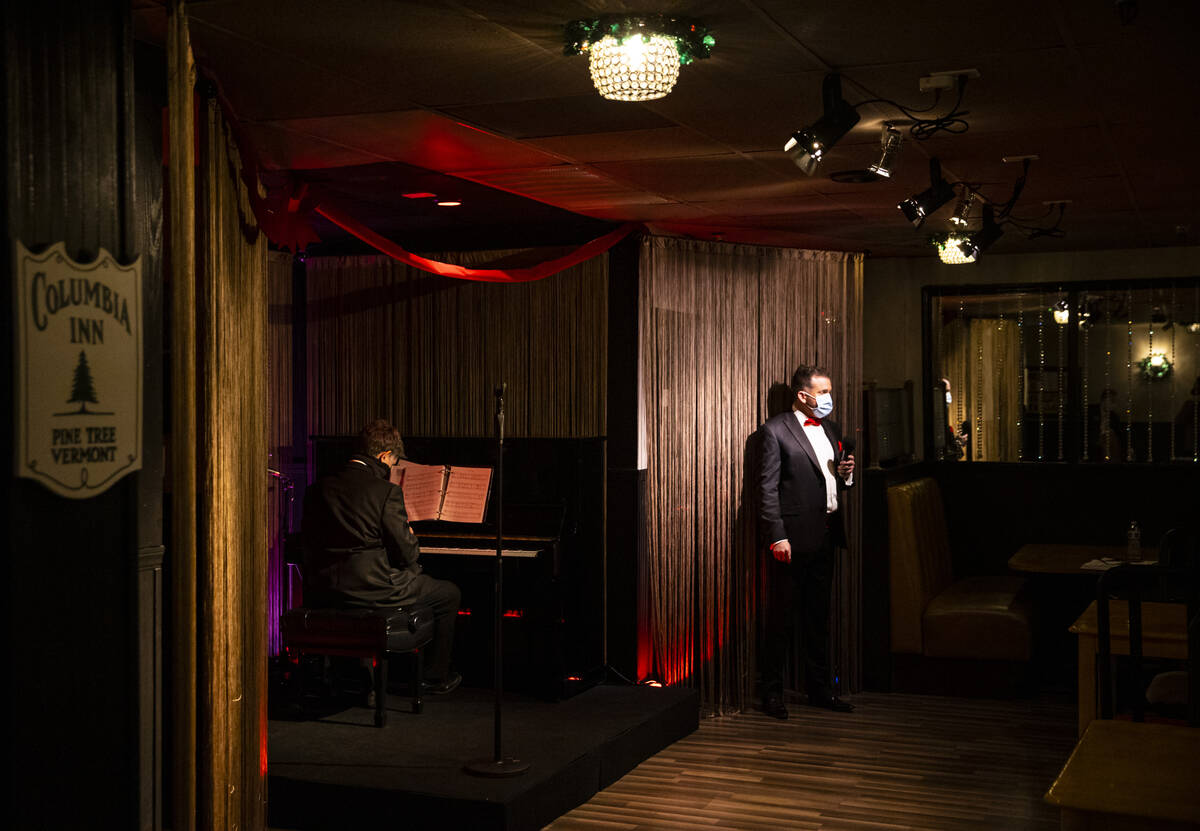 Sam Holder, right, prepares to perform during rehearsal for "A Vegas Room Christmas" at The Vegas Room in the Commercial Center off Sahara Avenue near Maryland Parkway in Las Vegas on Tuesday, Dec. 1, 2020. (Chase Stevens/Las Vegas Review-Journal) @csstevensphoto 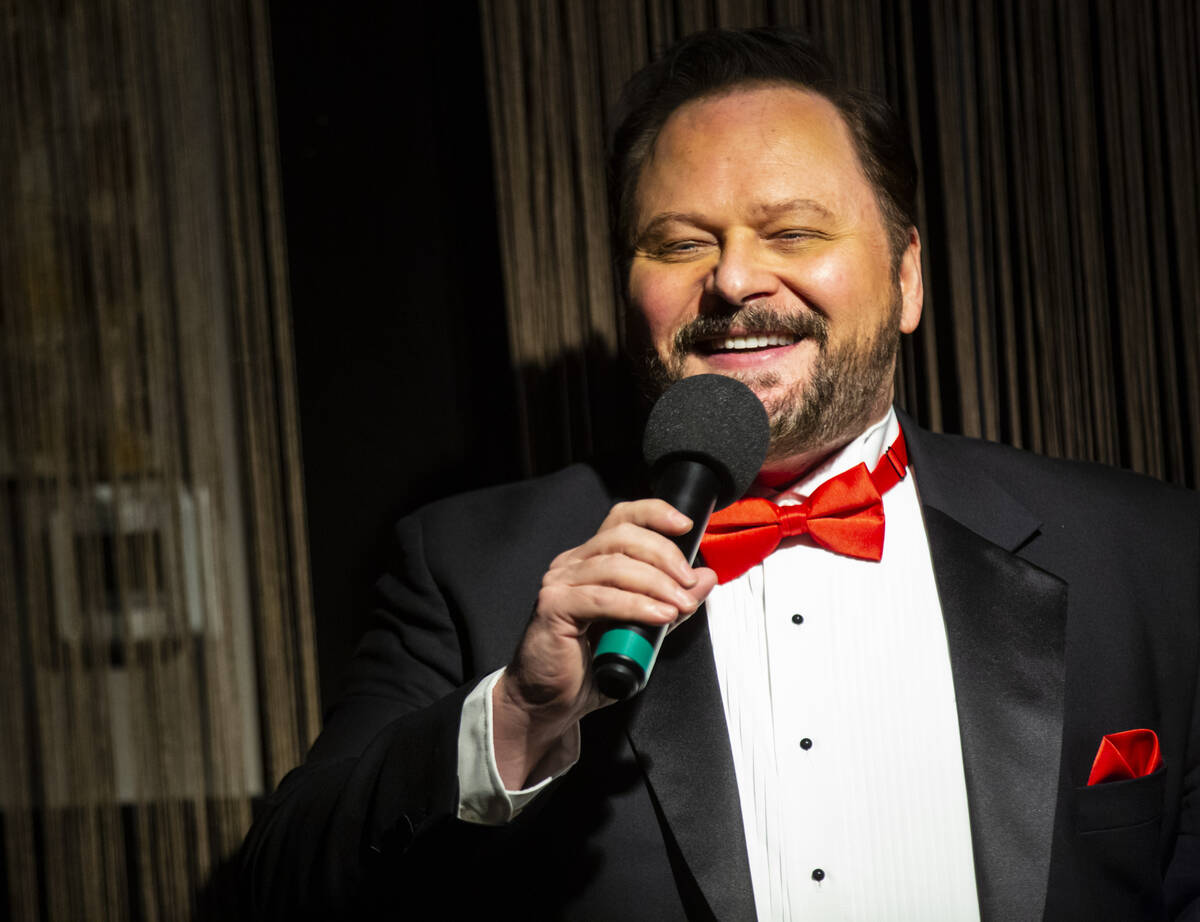 Randal Keith performs during rehearsal for "A Vegas Room Christmas" at The Vegas Room in the Commercial Center off Sahara Avenue near Maryland Parkway in Las Vegas on Tuesday, Dec. 1, 2020. (Chase Stevens/Las Vegas Review-Journal) @csstevensphoto 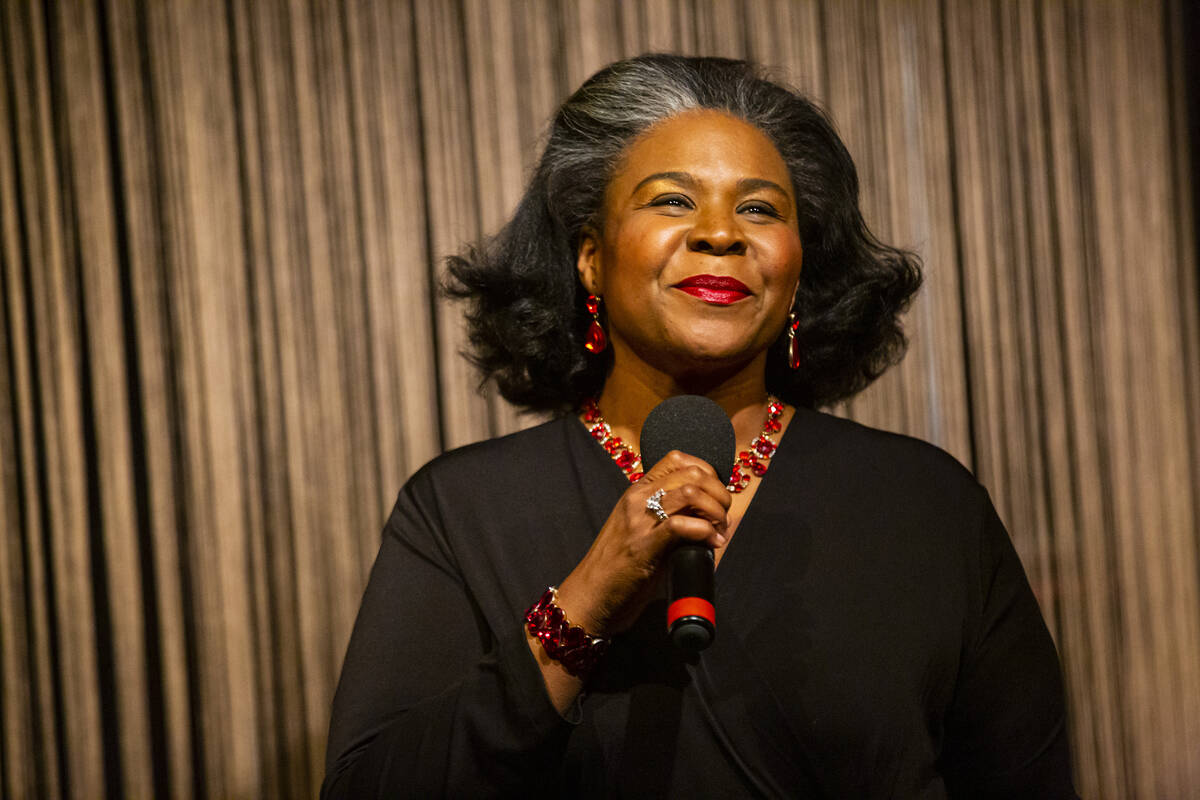 Amanda King performs during rehearsal for "A Vegas Room Christmas" at The Vegas Room in the Commercial Center off Sahara Avenue near Maryland Parkway in Las Vegas on Tuesday, Dec. 1, 2020. (Chase Stevens/Las Vegas Review-Journal) @csstevensphoto 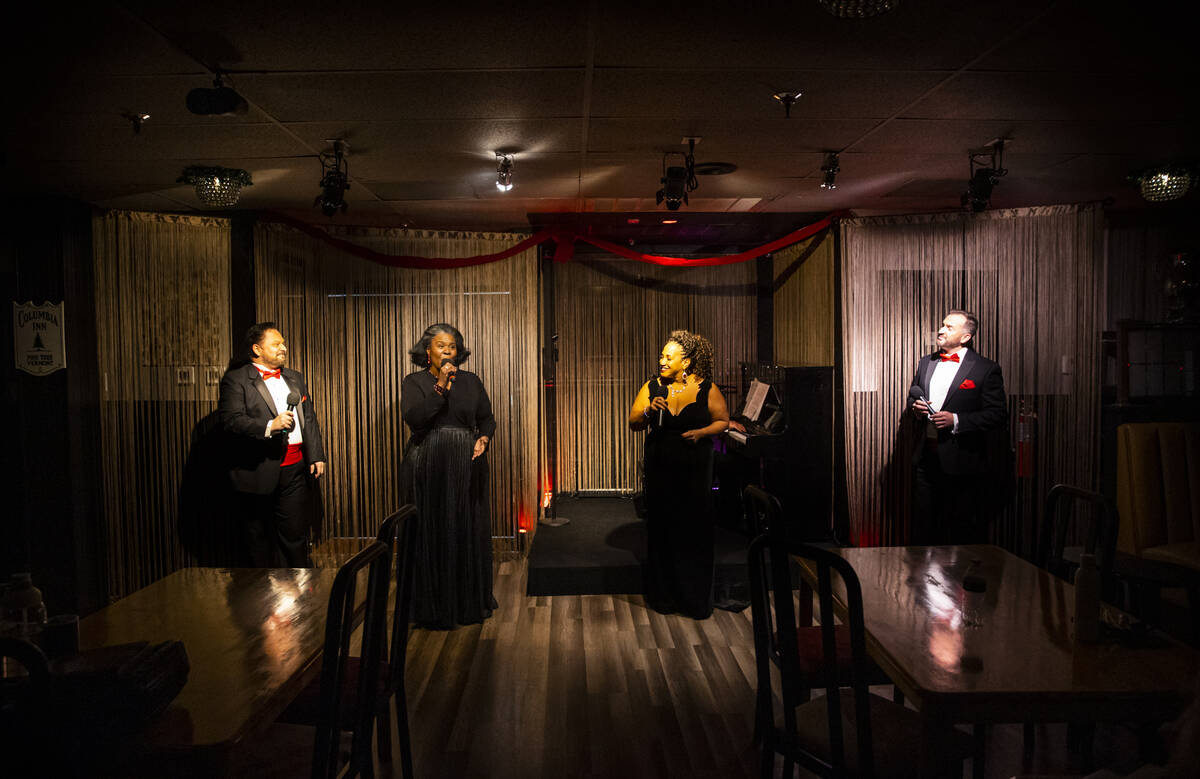 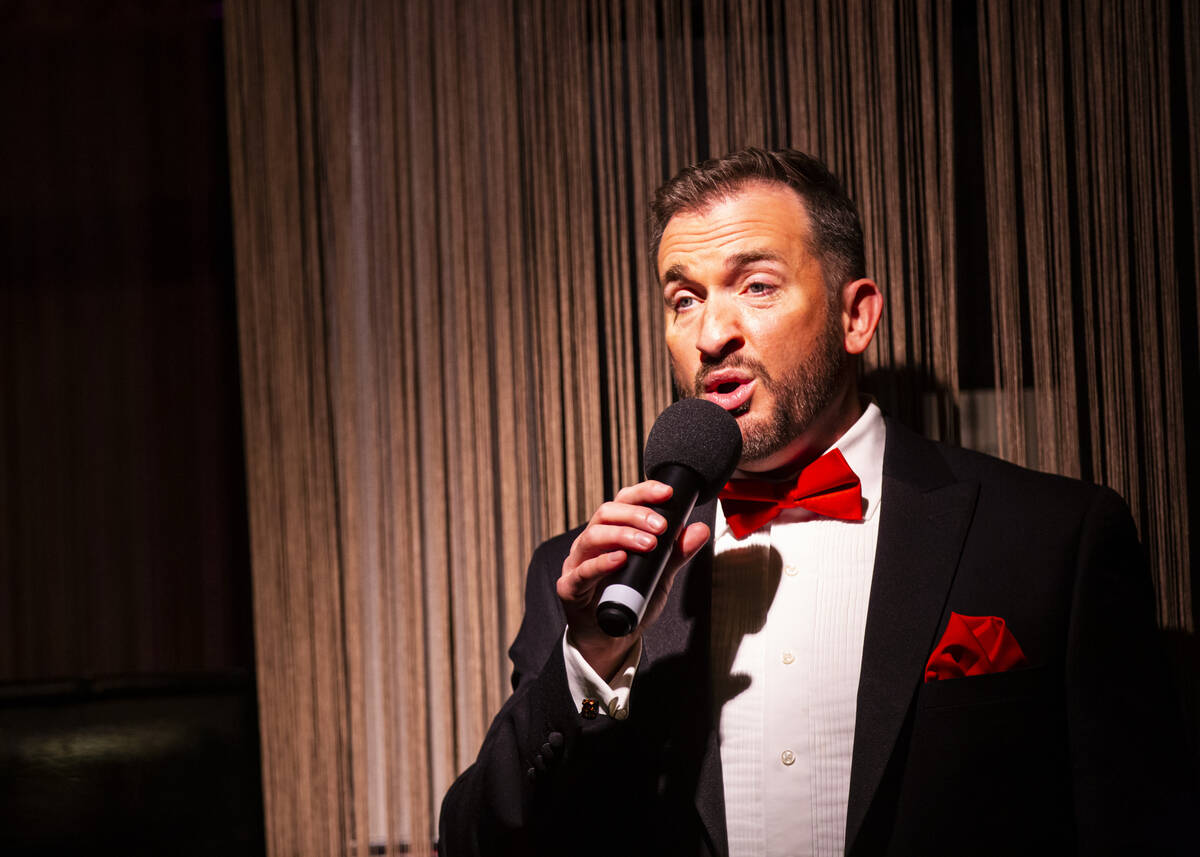 Sam Holder performs during rehearsal for "A Vegas Room Christmas" at The Vegas Room in the Commercial Center off Sahara Avenue near Maryland Parkway in Las Vegas on Tuesday, Dec. 1, 2020. (Chase Stevens/Las Vegas Review-Journal) @csstevensphoto 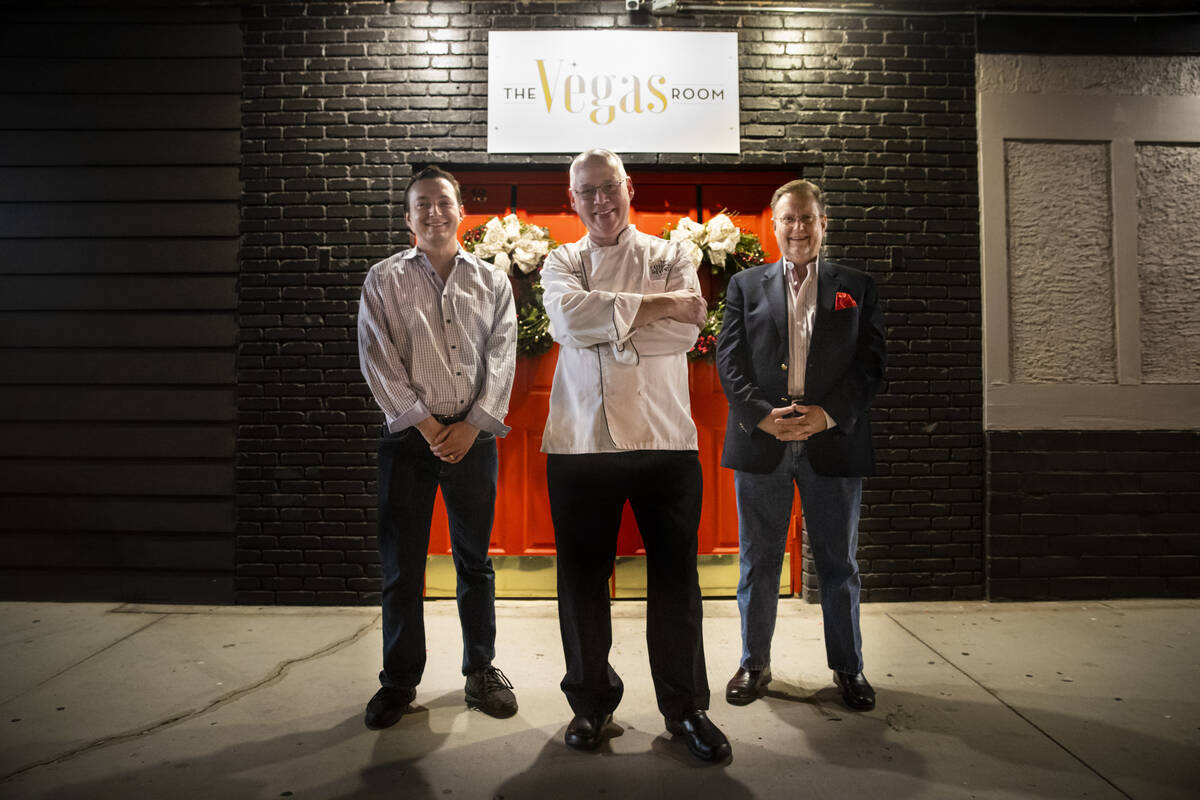 David James Robinson, chef and owner of The Vegas Room, poses for a portrait with Sean Stephenson, left, and Tom Michel before the opening of "A Vegas Room Christmas" at The Vegas Room in the Commercial Center off Sahara Avenue near Maryland Parkway in Las Vegas on Tuesday, Dec. 1, 2020. (Chase Stevens/Las Vegas Review-Journal) @csstevensphoto

The Vegas Room put on shows when hardly anyone else could, during the COVID shutdown. Its sister venue, The Nevada Room, provided a suitable stage for entertainers seeking to present new projects.

But neither could survive the widespread reopening of theaters and showrooms on and off the Strip. As those houses opened, their business suffered. So it is that on Aug. 20, the noble adventure at the historic Commercial Center on East Sahara will fall dark.

“We have a revenue model that is like three legs on a stool,” Tom Michel, co-founder of the venues with his partner, chef David James Robinson, said Monday during a chat at the adjacent Vickie’s Diner. “We had ticket revenue, food revenue, liquor revenue. What’s happening now, no matter what kind of pushing we do, is ticketing revenue is just not where it needs to be.”

The venue wound up becoming reliant upon House Seats and Fillaseat to generate audiences. And even adjusting the dinner price from, say, $24.95 to $27.95 could rankle customers who were loyal, but also cost-conscious.

“I loved what we did. I am proud of it,” he said while picking over a veggie omelet. “I am so happy right now. We have left a great legacy, and now we get to have some time off to travel and see some shows.”

The Vegas Room opened just a week before the pandemic shutdown, the first week of March 2020. But by the summer, the onetime Korean restaurant was holding cabaret-style shows as “ambient” (remember that term) entertainment. In May 2021, The Nevada Room opened its Piano Bar Bistro with its regular programming, and by the fall of last year the larger Nevada Room Showroom had launched.

Kelly Clinton-Holmes “Sit In” variety show anchored the Showroom, a boon to the club operators. Clinton-Holmes delivered terrific music/comedy performances and also tapped into her vast network of celebrity friends.

In one memorable night, Clinton-Holmes danced it up and performed sketches with Bubba Knight, an original member of Gladys Knight and the Pips. The co-star that night was Elisa Fiorillo, Prince’s backing singer in The New Power Generation days. One of many terrific experiences in the off-Strip haven.

“Right now, I’m just thinking of all the magic and wonderful evenings we had there,” Clinton-Holmes said. “Whenever we’d finish a show, I’d tell Tom and Chef David, ‘This is my favorite place.’ When I saw it, I fell in love with it. I am really going to miss it.”

The room served as something of a COVID reopening revival for Clinton-Holmes, now entertainment director and headliner at The Stirling Club.

Over its brief history, headliners at The Nevada Room Showroom included such icons as Rich Little (who had just debuted The Nevada Room’s onstage interview series Thursday) and Pete Barbutti. The great Motown-style act The Next Movement celebrated its 50th anniversary this year at The Nevada Room.

Among the shows coming up in the venue’s closing run is “Comedy Tonight!” starring Kathleen Dunbar and Jay Hollingsworth on Tuesday, the club’s “Radio Theatre Presents The Corporation (An ’80s Salute) on Aug. 5; The Mike Field Jazz Quintet on Aug. 6, and Clinton-Holmes’ final three performances each Thursday through Aug. 18.

Robinson (himself a musical-theater performer) heads up “Just a Song Before I Go: A Musical Tribute” on Aug. 10. The finale is “Tony Arias — The Show to End All Shows!” on Aug. 20.

But it is not the end of the clubs’ influence. The rooms have served as “an incubator of talent,” as Michel says, with stellar performances of new concepts from a bevy of talented entertainers, including Ruby Lewis, Michelle Johnson, Christine Shebeck, Janien Valentine, Lannie Counts, Jimmy Hopper, the Doo Wop Kings with the Swing It Girls, and many other Vegas artists. Keith Thompson hosted a weekly piano night in the Piano Bar Bistro, further expanding the venue’s talent roster.

Now, all these performers who headlined the venue need to find a few new playgrounds. Fortunately, Myron’s at the Smith Center, The Space and Notoriety Live are still busy booking great Vegas talent. But another club, Mosaic on the Strip, has also shut down, the first week of July. It, too, was a pandemic success story that closed (in this case pulling the plug amid operational issues, and a lease that was about to expire).

Michel says he plans to remain in Las Vegas, drawing from his experience in entertainment marketing. Michel is a former MTV and AMC marketing strategist, and was with Nevada Ballet Theatre before he and Robinson took on The Vegas Room challenge.

We will hear from Michel again, soon, in Las Vegas, even as the future of The Vegas Room and Nevada Room buildings is in doubt.

Michel drew from a well-known Broadway show to coalesce his feelings.

“It’s like ‘For Now,’ from Avenue Q,” the Vegas entertainment visionary said. “Nothing lasts. Life goes on, full of surprises.”

A Cool Hang is in the offing with Stoney’s North 40, moving into Santa Fe Station, likely by January. This is all part of the hotel’s widespread renovation, including Chrome Showroom. Huge market in that neighborhood.

A show that has exceeded expectations is the topless, circus-fashioned “Rouge” at The Strat Theater. I’ve seen a full dress rehearsal and opening night, enjoying the latter far more than the former. But some very discriminate Vegas entertainment types have caught the show recently and are raving about it. Now I’m hearing an international version of the show is under development, with Vegas entertainment pros directing.

Overall, the lineup in that venue is solid, rotating the LED-trimmed dance show “Illuminate,” Banachek’s “Mind Games” mentalist production (celebrating its one-year anniversary this week week), and beguiling magician Xavier Mortimer. And we need to ask, “Sammy? You out there?” awaiting a return of the Red Rocker Sammy Hagar this winter.

CHA Hall of Famer Kenny Davidsen is tinkling the ivories — tinkling, I tell you! — at Don’t Tell Mama’s at Neonopolis 8 p.m. on Wednesdays and Saturdays. Closing at 2:30 a.m. on Wednesdays, 3:30 a.m. Saturdays. Stay for the whole show. I dare you. No cover, ever, at Mama’s. No more pizza, though. The Little Oven That Could is also a pandemic casualty.