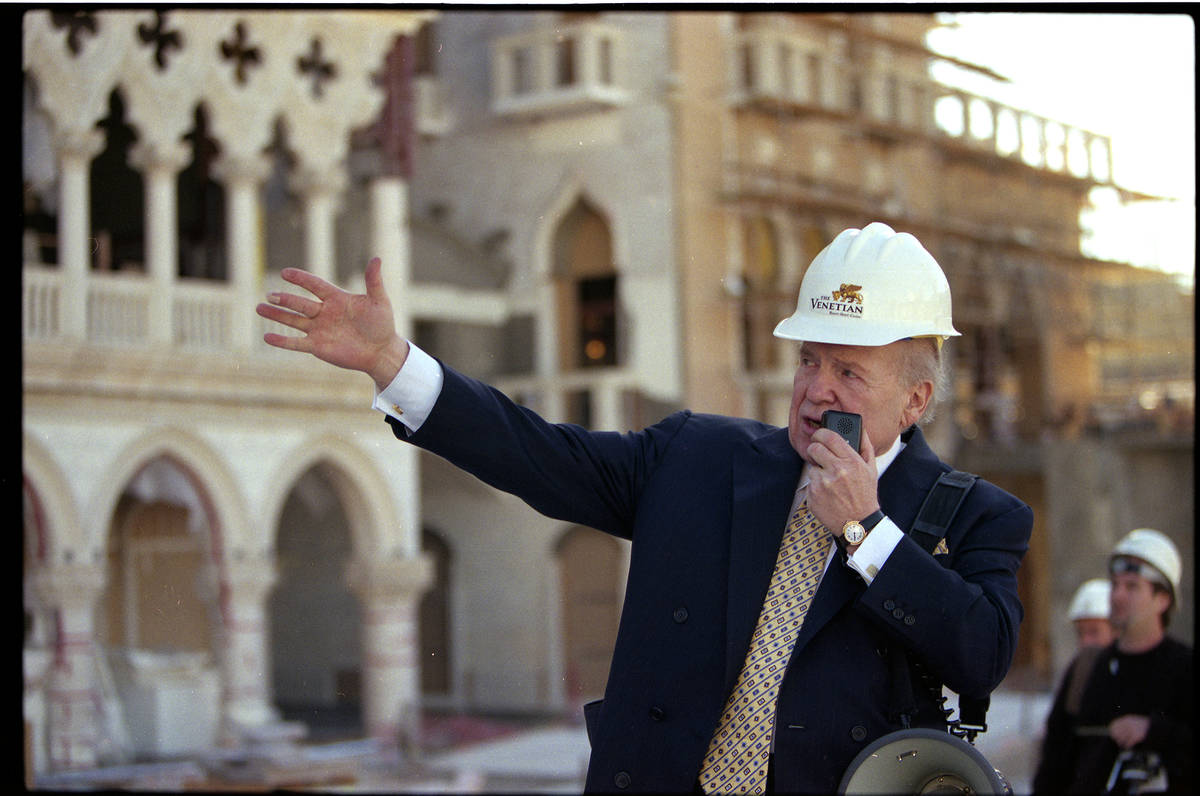 Las Vegas Sands Inc. Chairman and CEO Sheldon Adelson leads media on a tour of The Venetian construction site in 1999 prior to the Strip resort’s opening. (Las Vegas Review-Journal file) 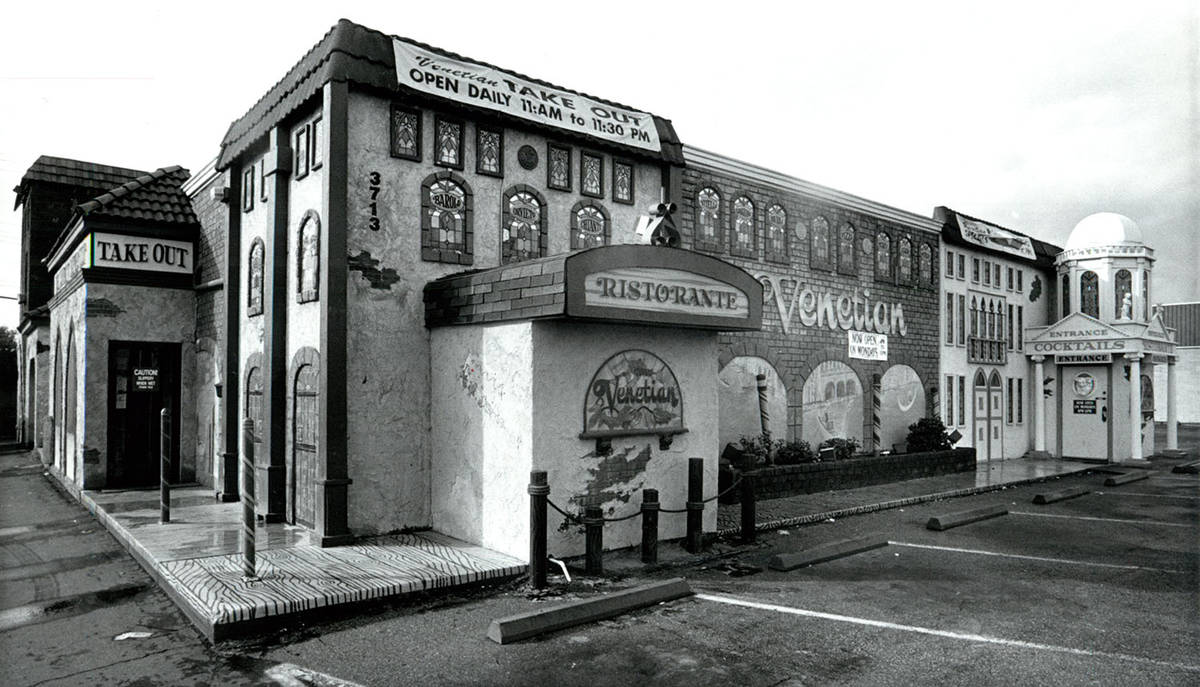 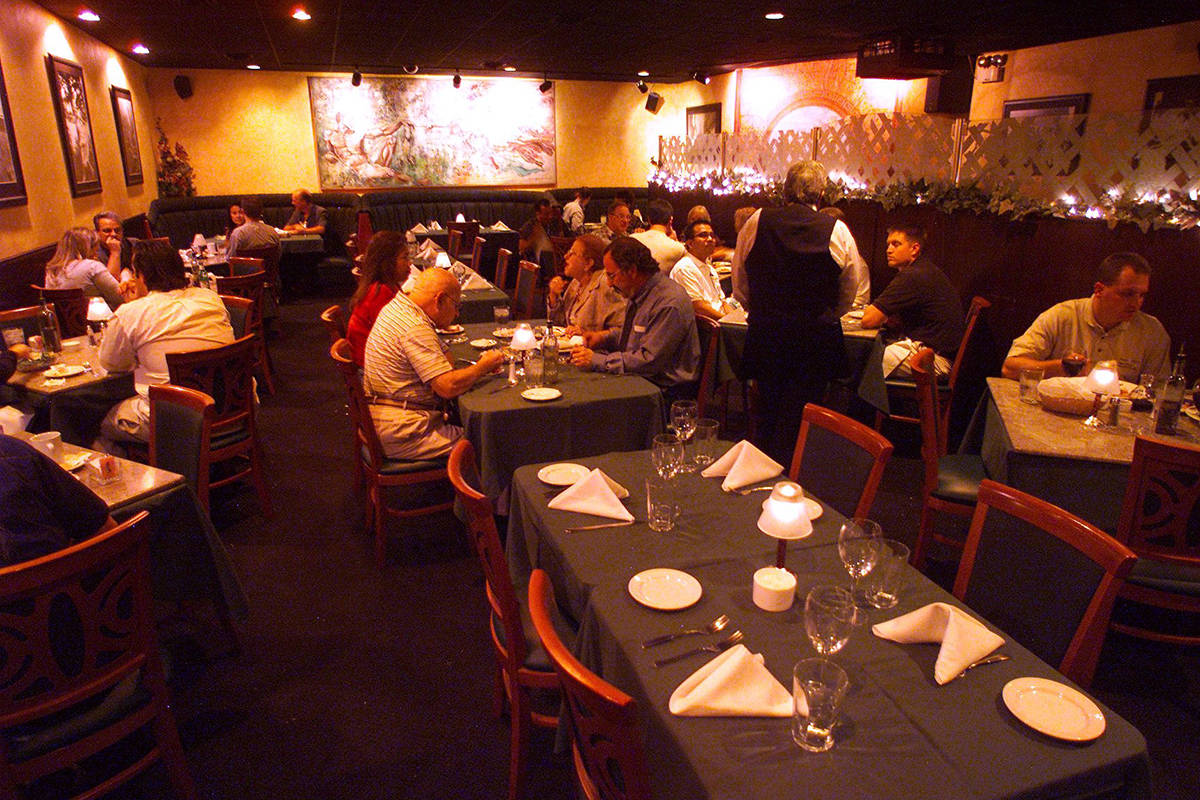 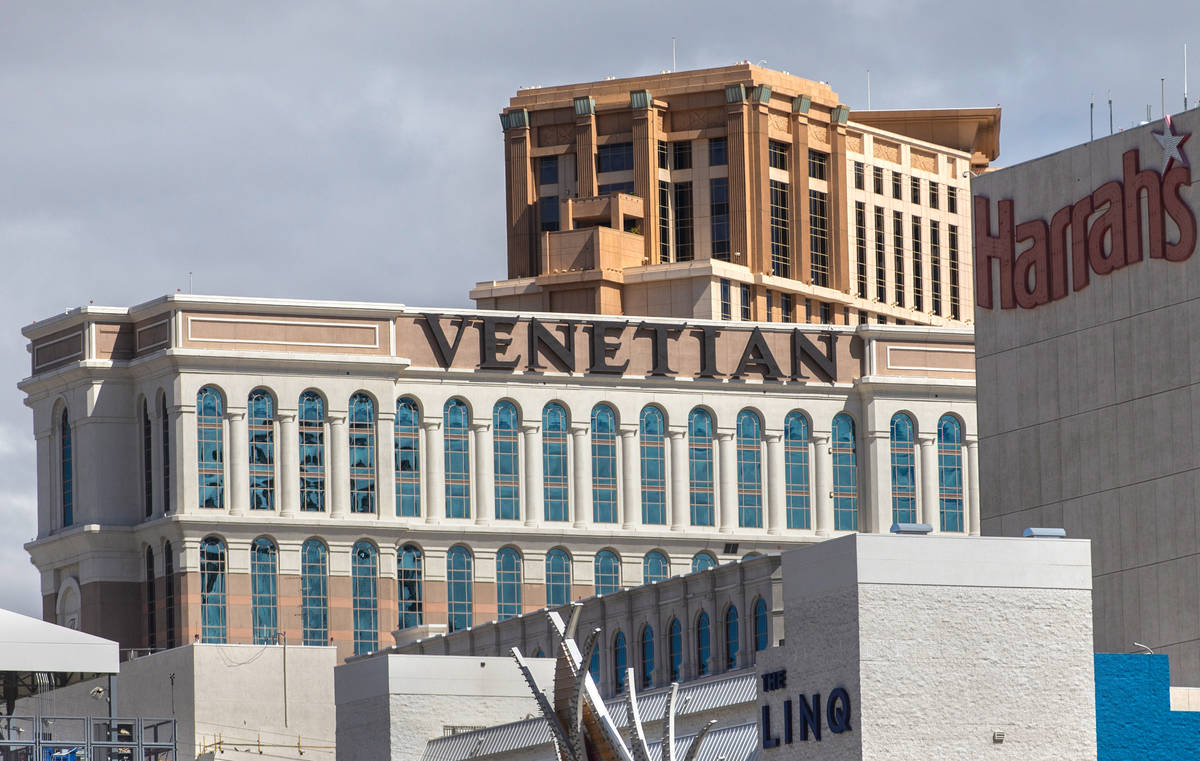 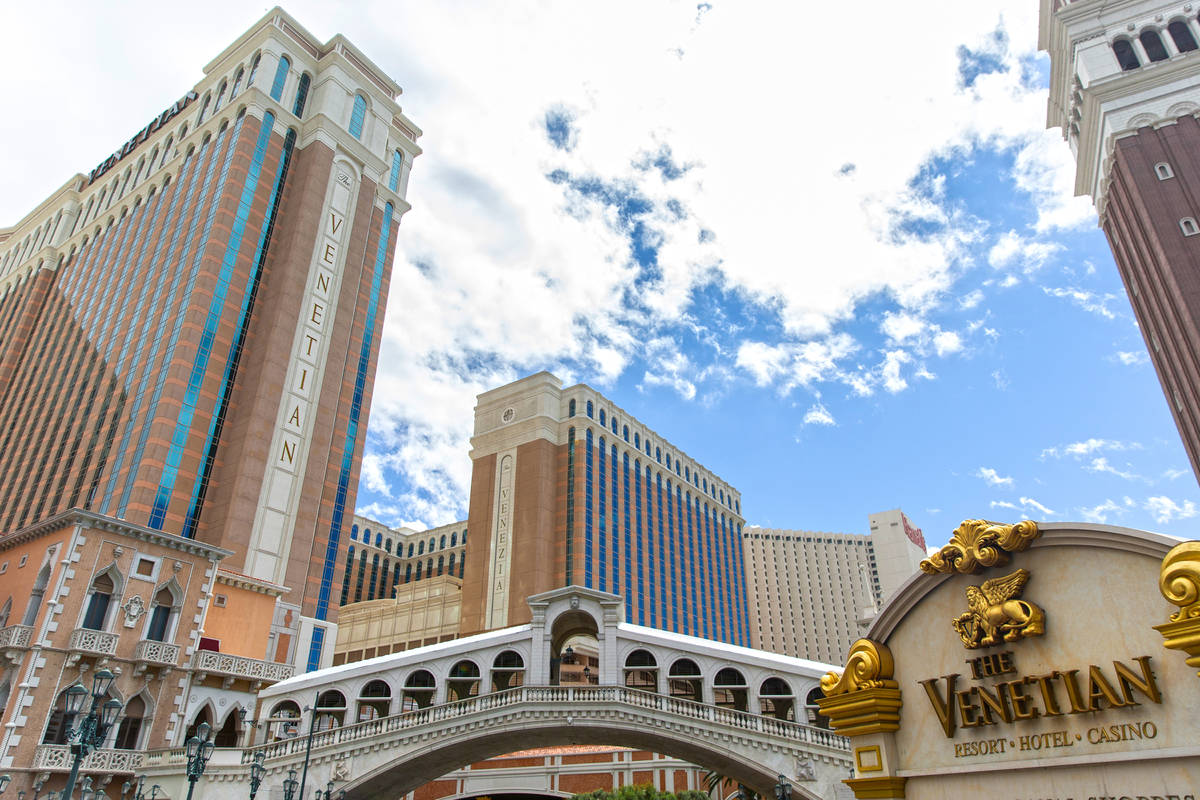 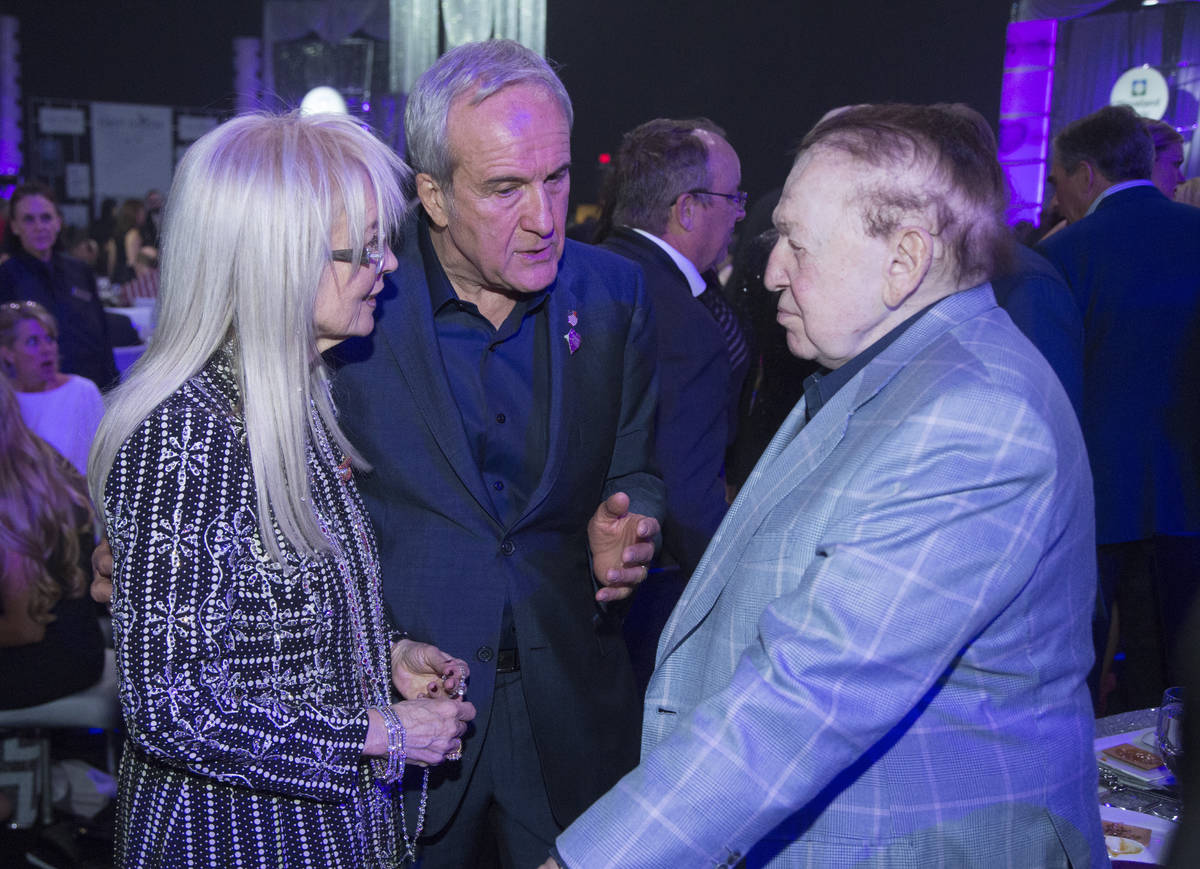 Over the decades, vintage Vegas and contemporary Vegas have been represented by a single title, Venetian.

The Venetian Ristorante, established by Lou Ruvo, was for generations a popular dinner hang on the corner of Sahara Avenue and Valley View Boulevard. The Ruvos opened the restaurant downtown in the 1950s, moving to Sahara and Jones in ’66.

The Venetian resort opened on the Strip in 1999, towering over the parcel where the legendary Sands once stood.

The cozy Venetian Ristorante held its name, even as the groundbreaking resort opened amid ample fanfare and boasting a lavish Italian design. Two Venetians, operated by two prominent Las Vegas families. This was no coincidence.

Lou Ruvo’s son, Larry Ruvo, related how the two shared the name after Sheldon Adelson’s passing on Monday night. The younger Ruvo had operated the Venetian Ristorante (started with Al and Maria Perry, Angie — Maria’s sister — and Lou Ruvo) for years, full-time after his father’s death in 1994. Soon after, in about 1995, Larry Ruvo took a call from his cousin Lorraine Hunt, who was a Clark County Commissioner.

Hunt told Ruvo about plans she’d just reviewed for a fancy new resort on the Strip, to be called The Venetian. Ruvo saw this as a moment of consequence. He had attorney Pete Bernhard send a letter to Adelson’s reps explaining that he held the trademark to the Venetian name in Las Vegas.

Ruvo soon heard from Las Vegas Sands exec Rob Goldstein, requesting a meeting to discuss this name. “I met with Rob and explained my family had owned the rights to the name Venetian for 40 years, and that my family had to be given something for the name,” Ruvo said Tuesday, reviving a tale in his book, “The Venetian Memories,” issued in 2009 to celebrate his mother, Angie’s, 85th birthday. “Rob thought that was fair and arranged for me to meet Sheldon.”

The two conferred in a construction trailer on The Venetian (resort) site. “First thing Sheldon said was, ‘I’ve checked you out,’ ” said Ruvo, who founded the Cleveland Clinic Lou Ruvo Center for Brain Health in honor of his father. “He said some very complimentary things about me and my family. I told him I’d checked him out, too, and told him he had the reputation of being a little difficult, but my dad said never to judge a book by it’s cover.”

After 45 minutes of chat, Adelson asked Ruvo how much he wanted for the Venetian name. Ruvo responded by setting a baseline value, referring to Steve Wynn’s $750,000 payment to the Mirage Motel for use of “Mirage.”

“No,” Ruvo said. He countered with … nothing.

“I told him, ‘If you’re coming in to Las Vegas to create a lot of jobs for people, I want only that you make my family proud with the name,’” Ruvo said. “My father would have raised me wrong if I were to hold you up for a million or two million dollars when you’re doing something this positive for the community.”

Adelson stood, and grabbed his small desk calendar. “He got very animated and said, ‘Do you understand that I’m the son of a Boston cab driver, and nobody has every given me anything for nothing?’ ” Ruvo said. “I said, ‘Well, mark down this day on that calendar, because you’ll never hear from me again about this, nor will there be any lawsuits for using the name Venetian.”

True, the Venetian name lived on at the restaurant for a few years even after the Ruvos’ ownership. The business was then Slanted Clam, for a short time, and for the past decade has been Herbs & Rye.

The Ruvos and Adelsons were friendly from that Venetian conversation forward. When Adelson became the first resort owner to provide mini-bars in guest rooms, he sought Ruvo, a high-ranking executive with Southern Glazer’s Wine and Spirits of Nevada, to help fill his inventory.

Ruvo has been especially moved by the Adelsons’ philanthropic passion. The family founded the Adelson Educational Campus and the Dr. Miriam and Sheldon G. Adelson Clinic for Drug Abuse Treatment & Research; and have long supported philanthropic efforts internationally, particularly in Israel.

“It’s a sad day for Las Vegas, a sad day for Israel, a sad day for the charitable world, and a sad day for my family,” Ruvo said. “He is a man I truly, truly respected and admired. His charity work will be his legacy. Sheldon Adelson should have a statue on the Strip. He was that extraordinary.”