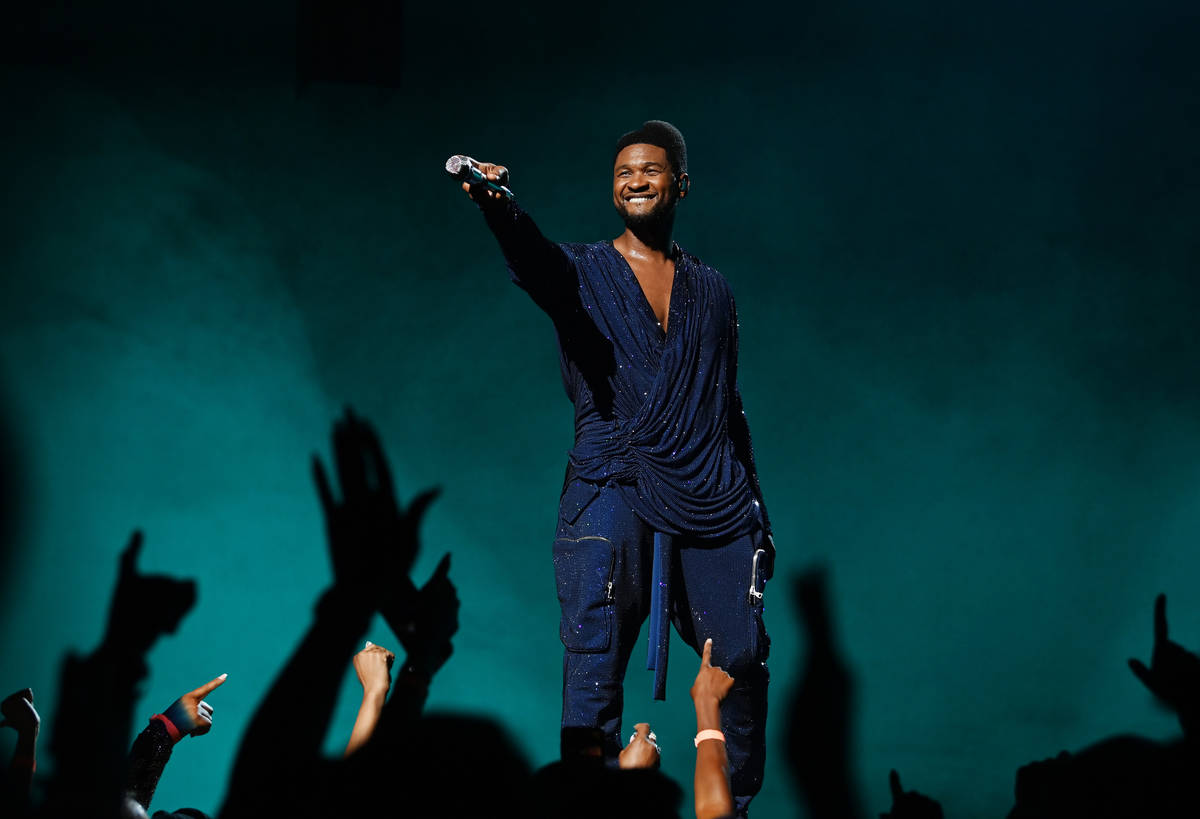 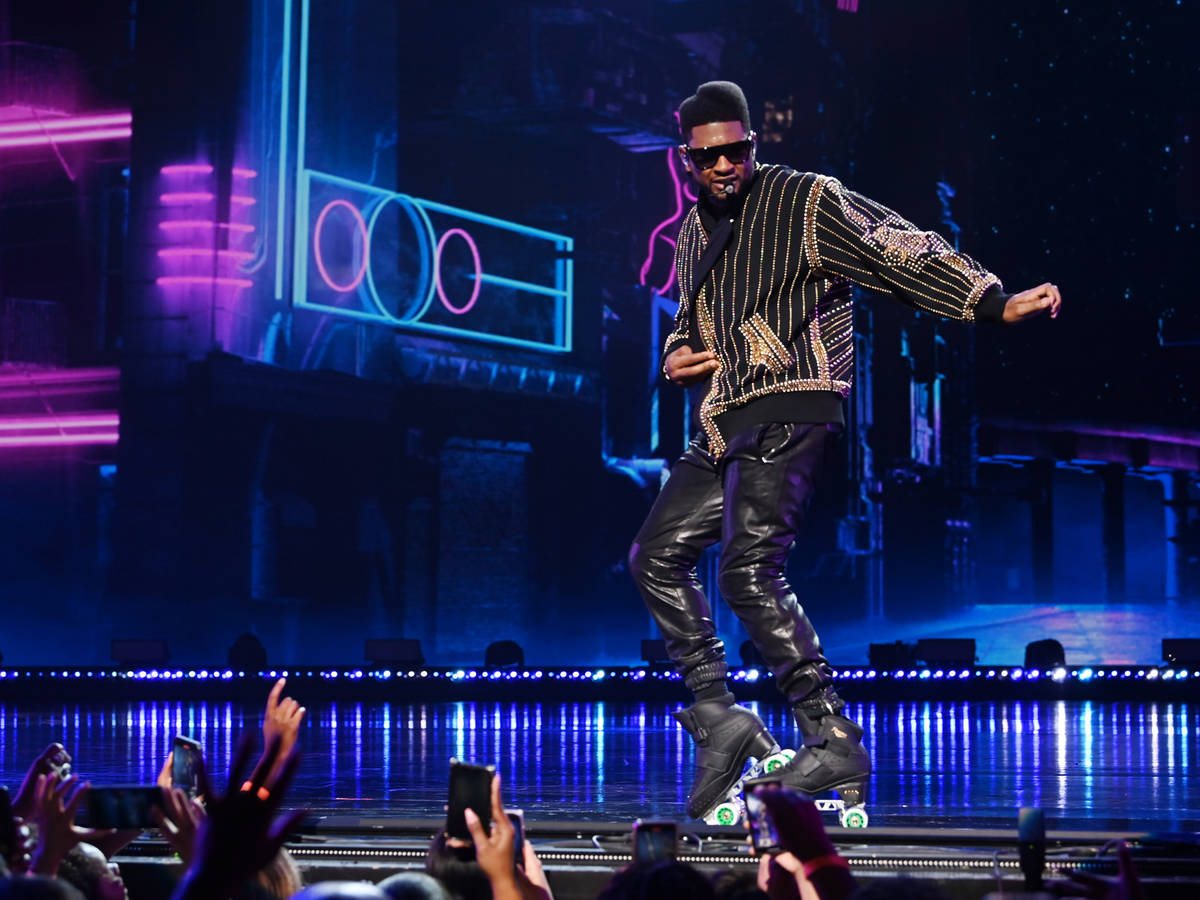 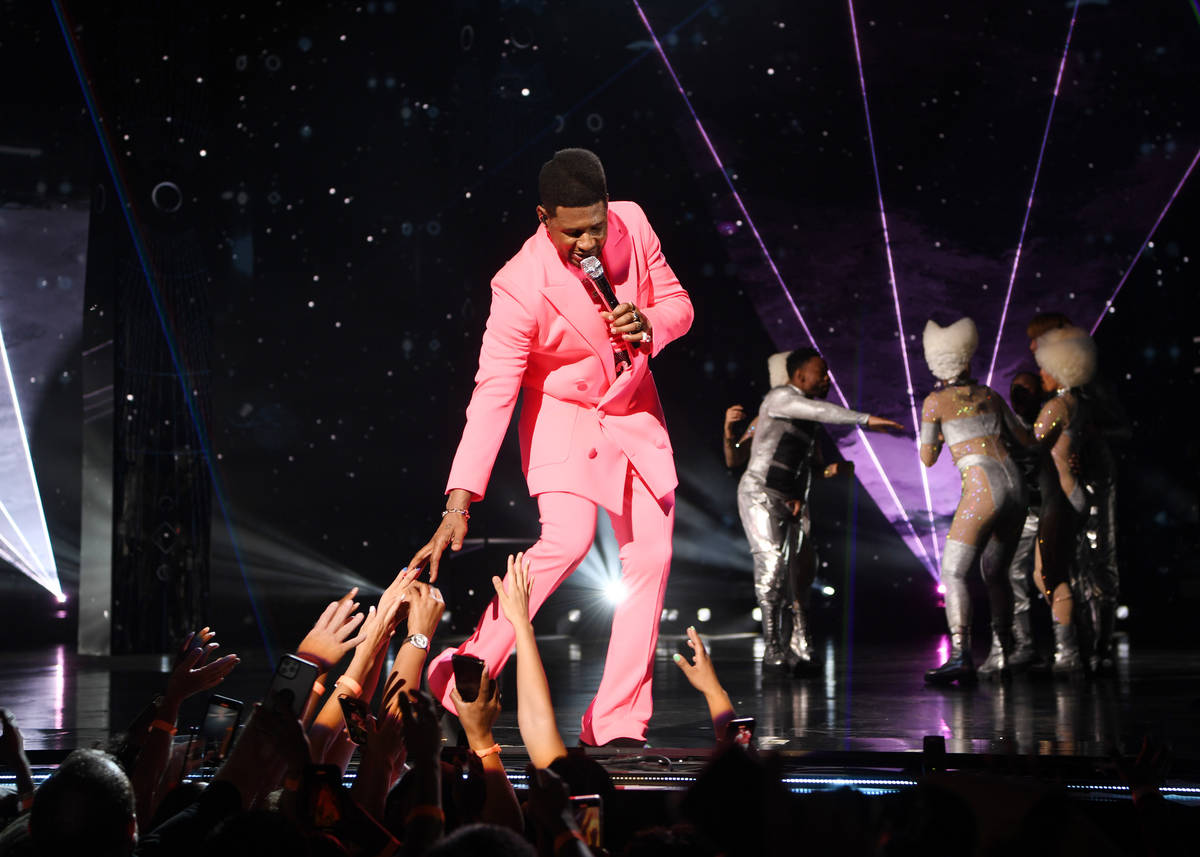 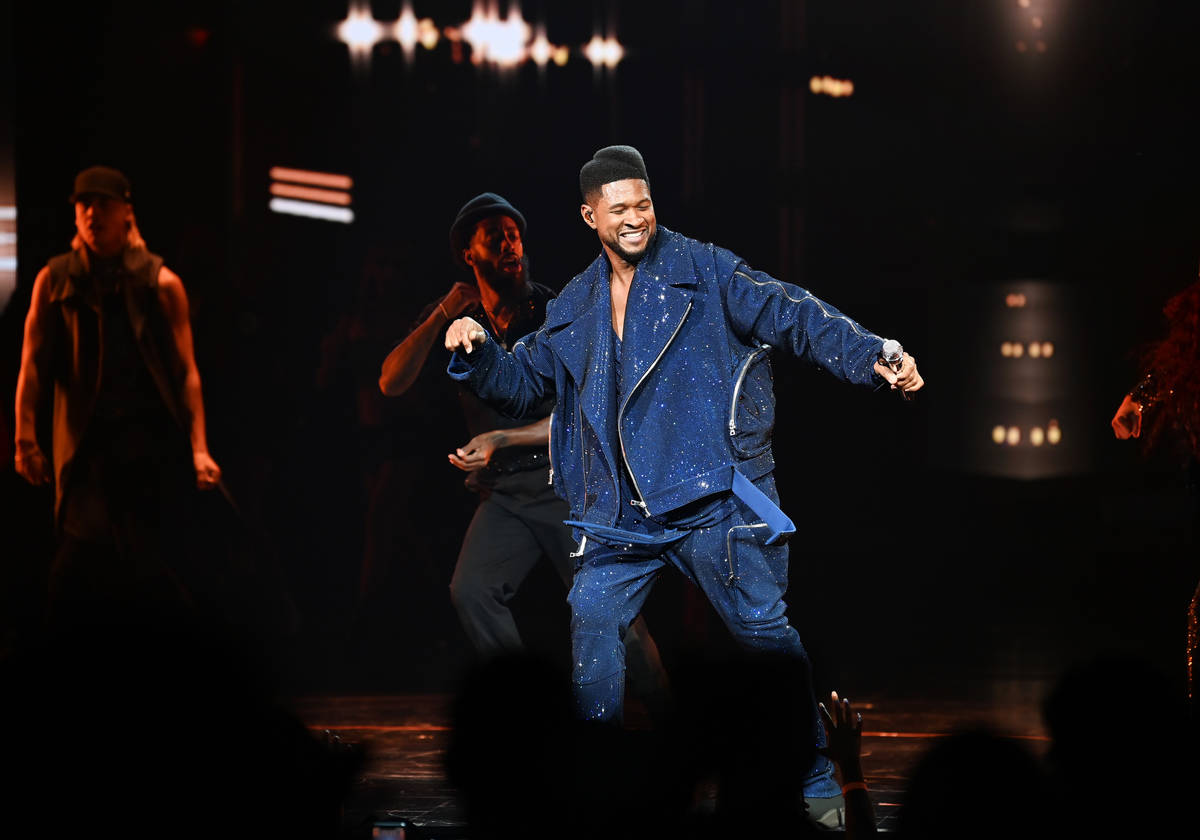 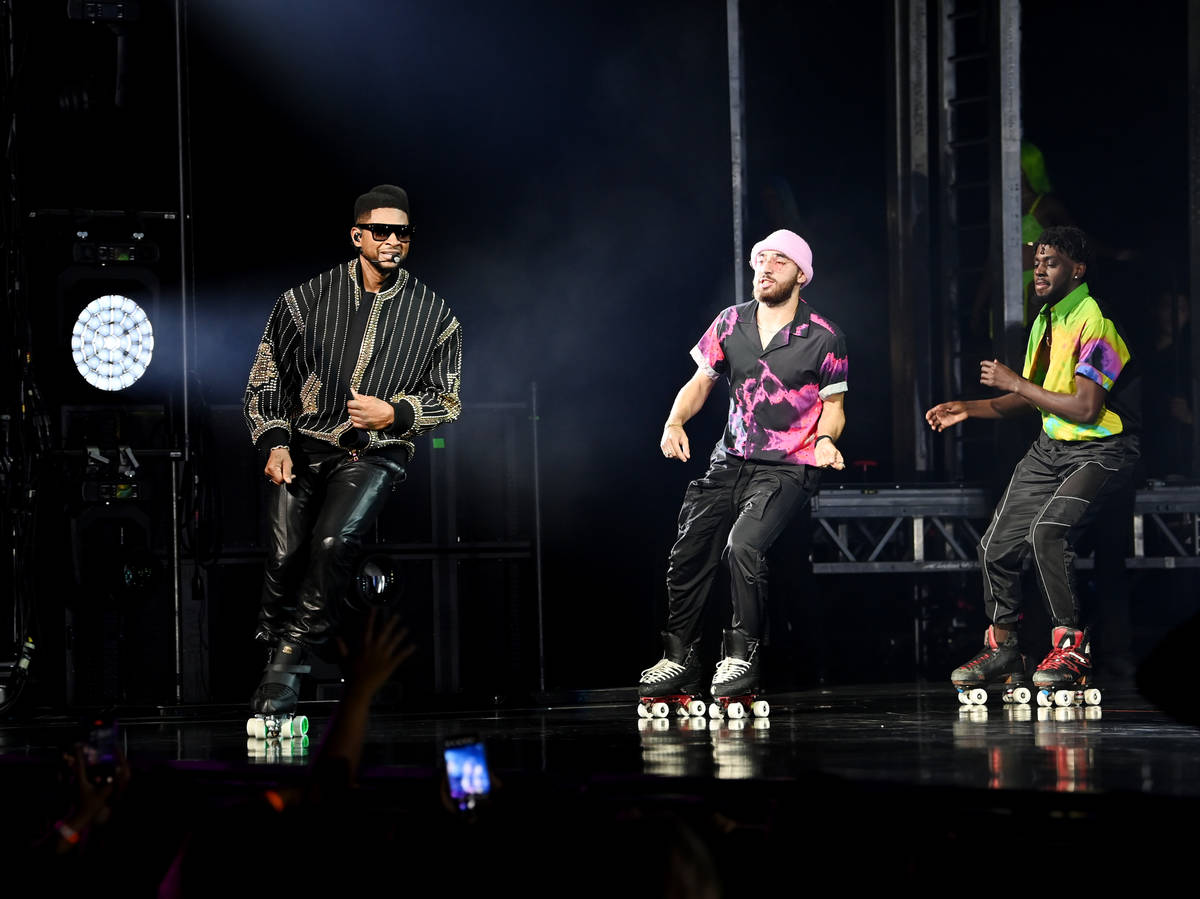 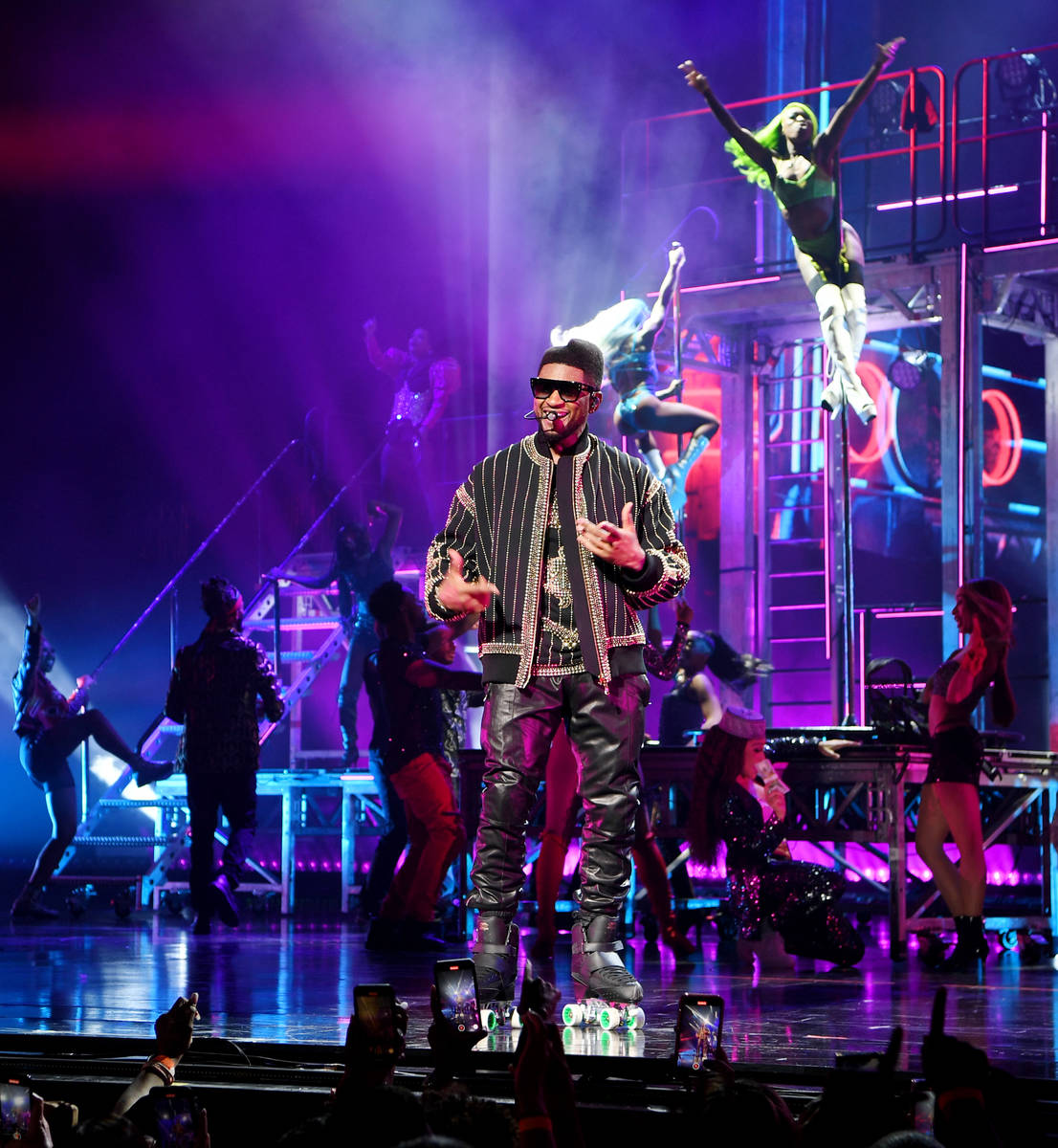 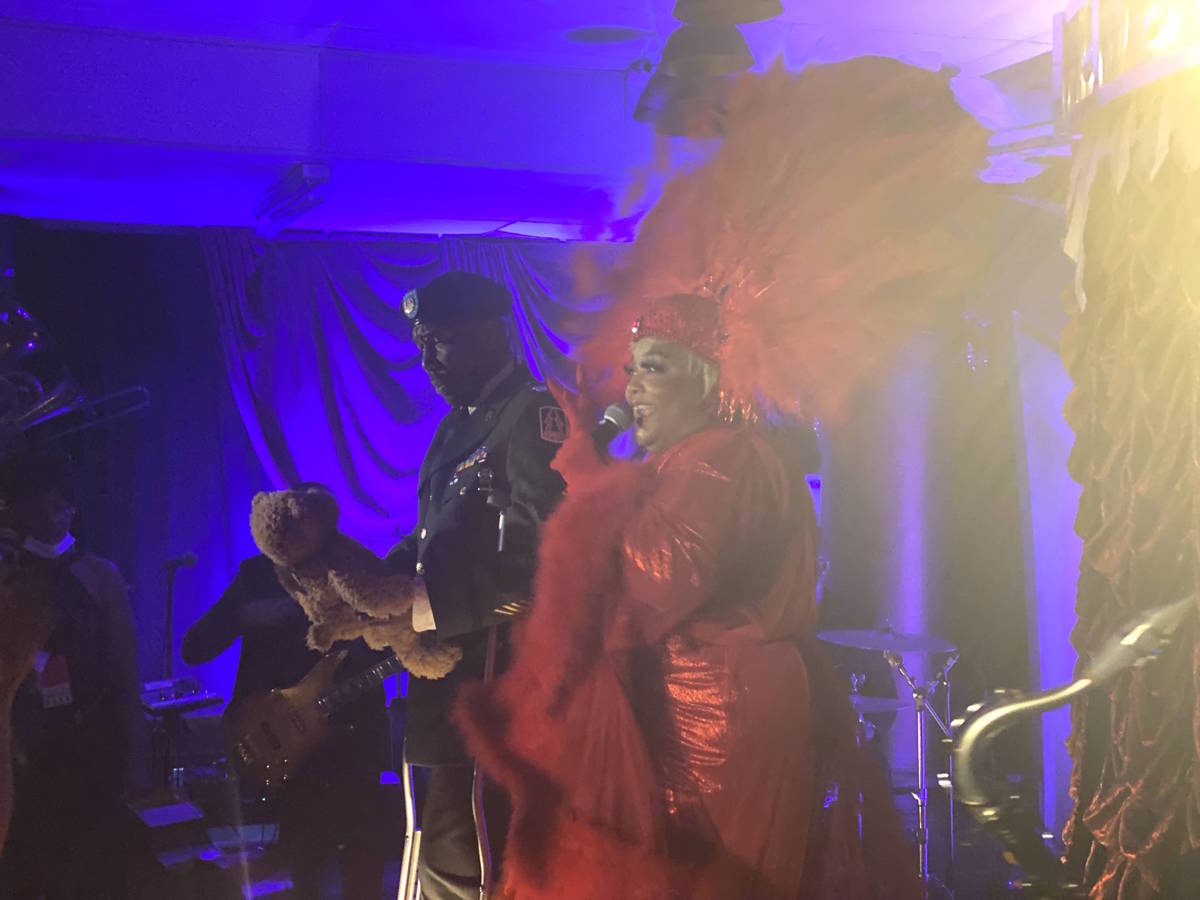 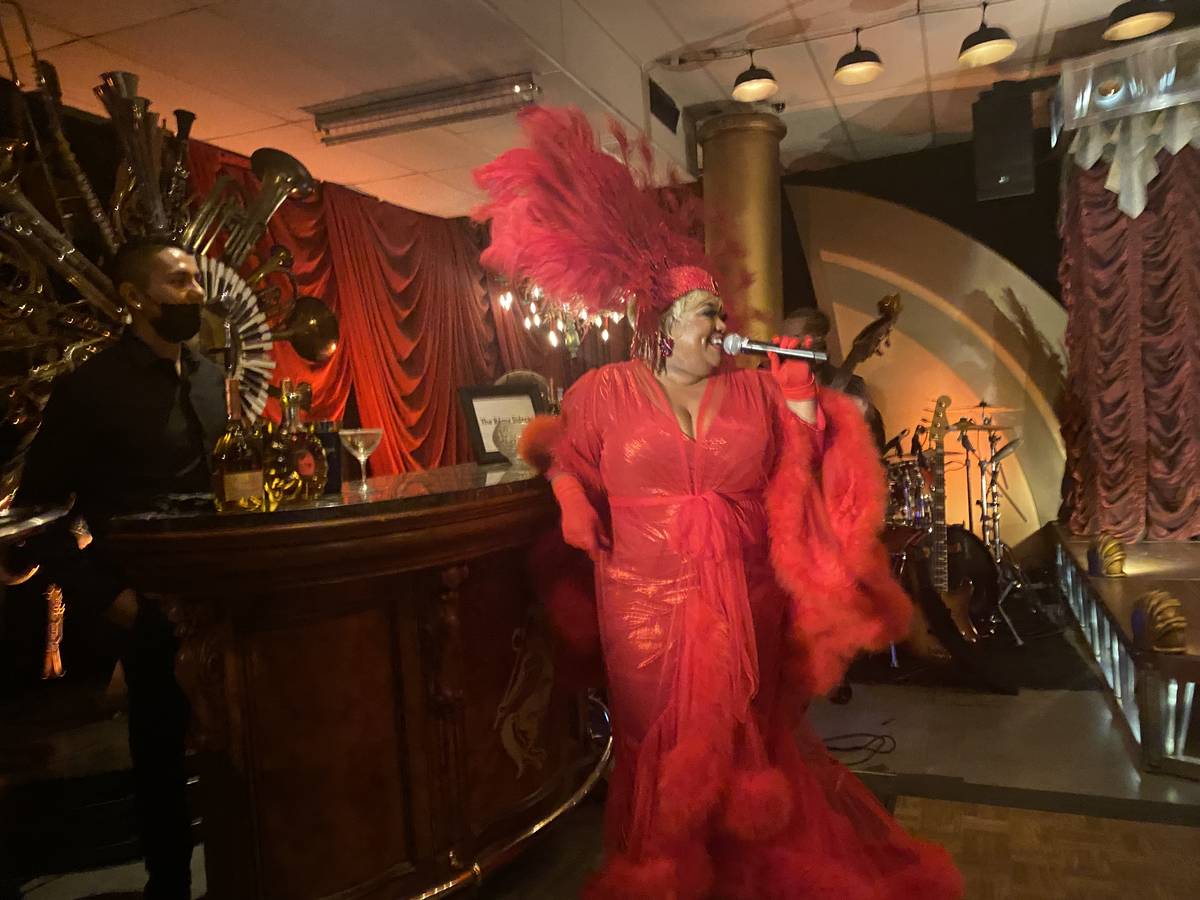 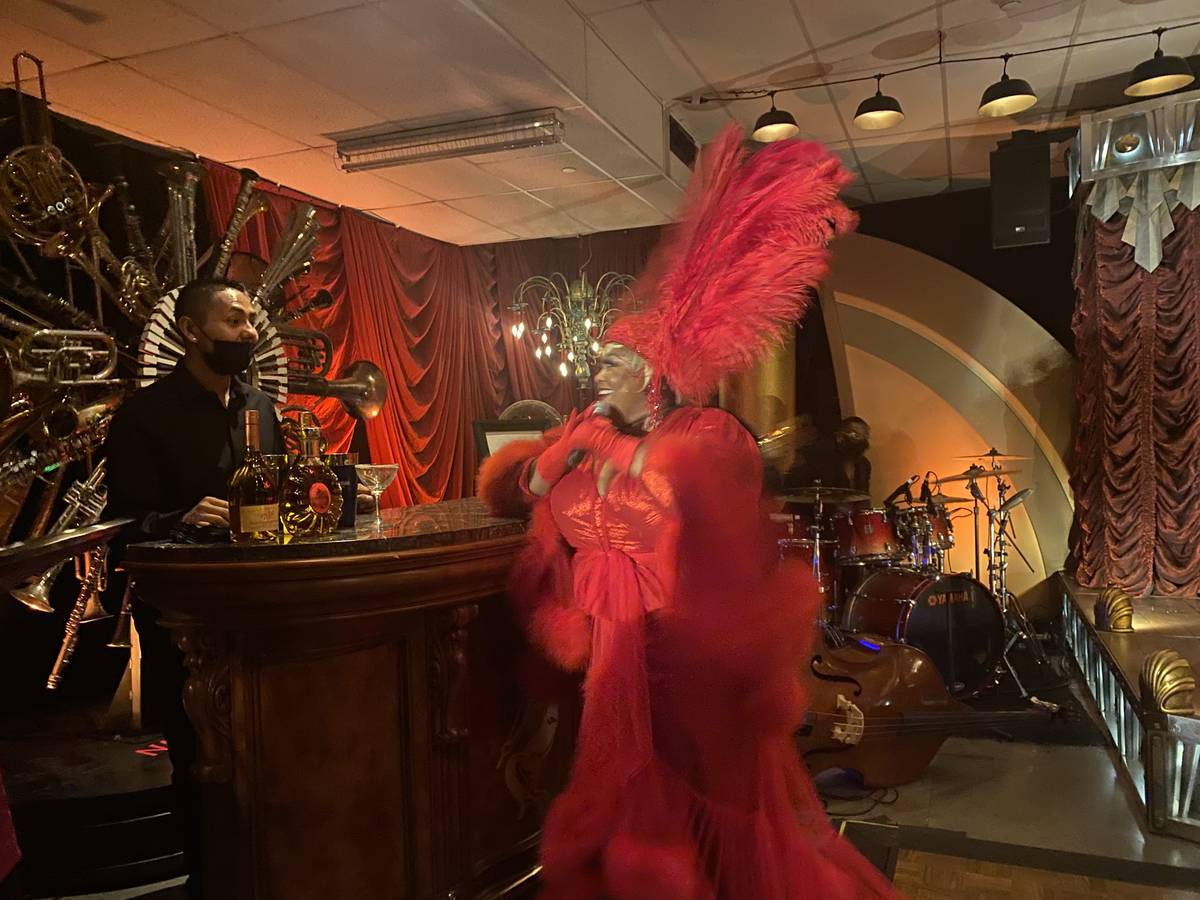 Deep into Usher’s show at The Colosseum at Caesars Palace, the set rains with “Ushbucks,” the superstar’s counterfeit cash that looks and feels so very real.

So much of this artificial money litters the stage that a leaf blower is brought out to clean the floor. It’s an inspired moment — the height of showmanship. The star not only has developed his own customized cash stash, but has so much of it that he requires landscaping equipment to sweep it out of the way.

Usher’s Colosseum residency, which opened Friday night, is peppered with such deft moments. We have powerful lights and sound, two dozen dancers and a two-story set piece that seems structurally permanent.

But we also watch, equal parts amazed and bemused, at the star on roller skates. There is a smoking aerial pole dance by a “Bad Girl” during the song of that name, and even a quasi-erotic number with the headliner grinding on the mic stand.

The R&B superstar is performing 14 shows through Aug. 14 and four more in December to close the year. The performance features fan faves “”U Don’t Have To Call,” “Love In This Club,” “Climax,” “Nice & Slow,” Yeah!,” “My Boo” and “Confessions Part II.”

But the show is not simply a recitation of Usher’s hits. All smiles and style, he arrives in a glitzy, rhinestone-laden suit, dancing through an entrance used by ticket-holders. Immediately, he peppers his first numbers, “My Way” and “Caught Up,” with two dozen backing dancers.

The commitment to dance is welcome, generously returning a large-scale type of entertainment that Vegas has mostly ditched over the past generation. It helps that Usher himself doesn’t miss a step, as proficient as his dance team.

The musicianship, though, is reduced to a pair of percussionists and a keyboardist. Still, The Colosseum erupts with sound, a reminder of its audio overhaul and the venue’s refresh from a couple of years ago.

The show’s signature set is a two-story scene that is reported to be an homage to the Atlanta strip club Magic City. The rollout is as dizzying as the star’s several costume changes. Not since Cher played here have we seen such an enthusiastic swapping of attire. Usher’s shimmering silver suit; studded black short-sleeve shirt with matching ball cap; and show-closing, hot-pink ensemble were favorites.

Ushers performance, the first at The Colosseum since its reopening, seemed steeped in destiny. Entertainment observers in Las Vegas were wondering if it would even come off as originally planned, given pandemic uncertainties.

It’s unclear if protocols will be adjusted at The Colosseum. But the Usher production team — along with staff from Caesars Entertainment and promoter Live Nation — still brought a mind-blowing spectacle to the stage in the middle of a public health crisis.

At the end of the show, Usher brought out the entire stage team.

“It means so much to me, just to get back to the thing I loved most, which is performing for you,” he told the audience. “Yes, yes — it’s been so good that I don’t want to close the curtain.”

The show also closed out with the requisite blasting of confetti — yet more “Ushbucks” (don’t try to use them at the tables, kids). The bills were a fitting souvenir of a night when a star performer returned to the stage, and paid it forward.

Show before the show

Usher’s preshow plays out much like a second production itself. This is the Backstory presentation. You’re told to follow the Yellow Brick Road to this downstairs haunt, filled with themed rooms envisioned by Usher himself.

On Friday, I caught Club Ush, which feels as if you took the defunct supper club Rose. Rabbit. Lie. and dropped it to the bowels of Caesars Palace. Even Skye Dee Miles and members of her backing band rock the place, with hired-gun dancers performing undercover, scrambling to the dance floor between the musicians and cocktail tables.

As a capper, the wonderful Eric Jordan Young — portraying Usher’s late, estranged father Usher Raymond III — arrives onstage, dressed in military garb and holding a teddy bear. There is a backstory to this Backstory, about how the superstar son attempted to reconnect with his father.

Also spotted in this mix, in some sort of creative capacity, is Majestic Theater founder and Vegas arts community leader Troy Heard.

That scene spills through a curtained-off, outdoor street-dance segment just off the Forum Shops at Caesars’ lower-level valet. There is more to this event — much more (a strip club, a futuristic enclave called Ush Land) — starring about 30 actors, musicians and dancers.

The Backstory is for those holding VIP tickets, paired with Usher’s performance. But this inspired preshow event could stand on its own even outside Usher’s production at The Colosseum. It’s wild.