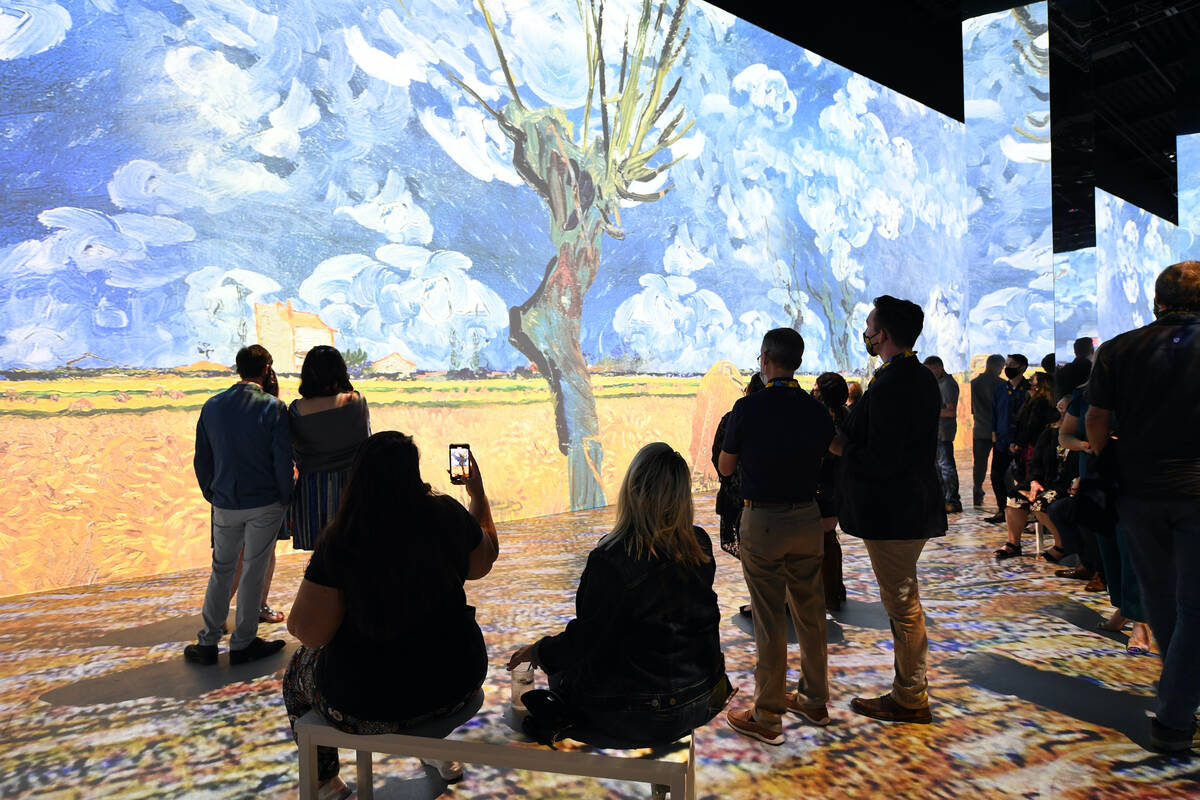 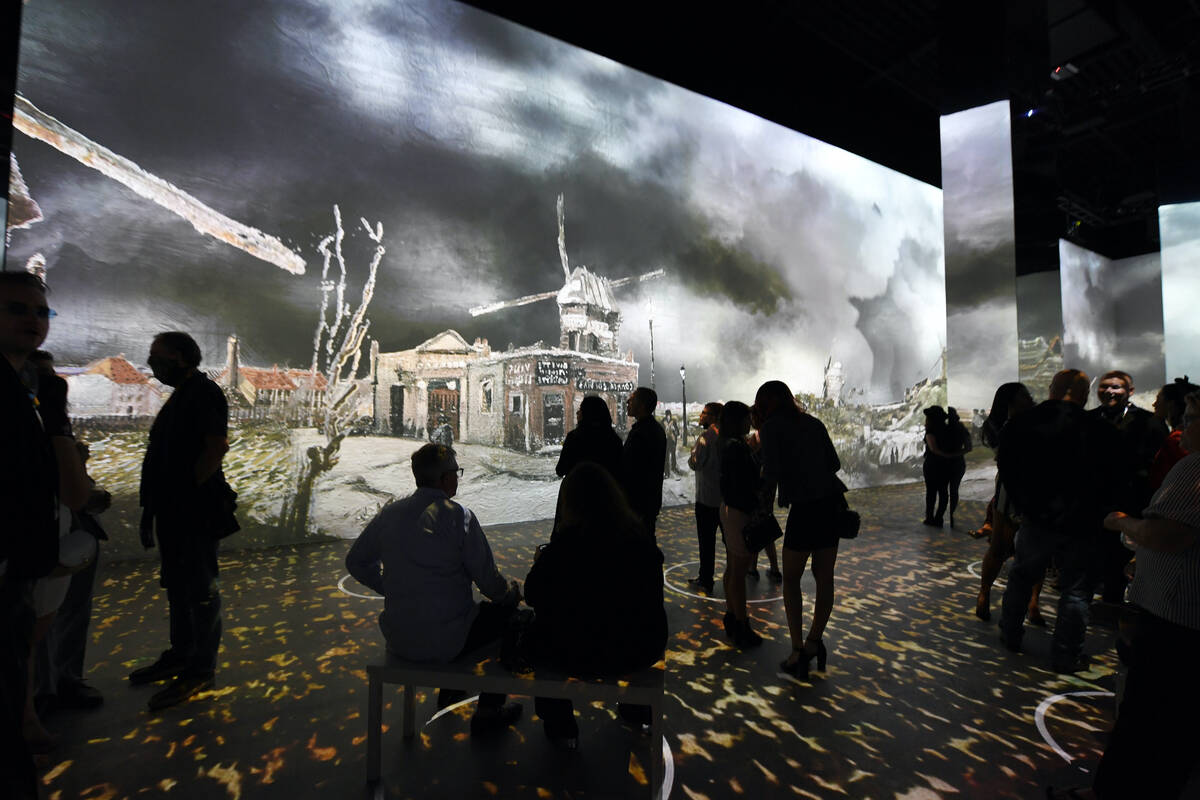 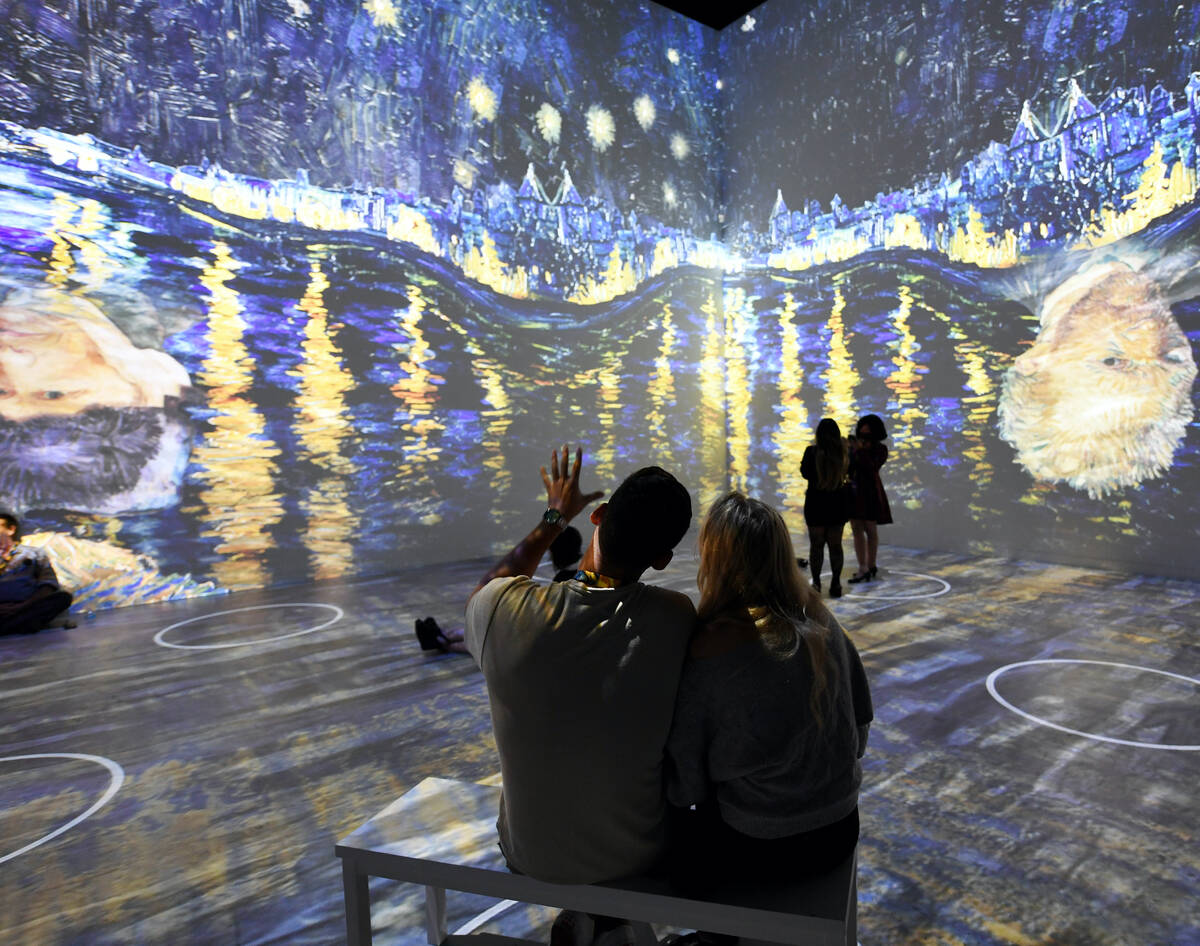 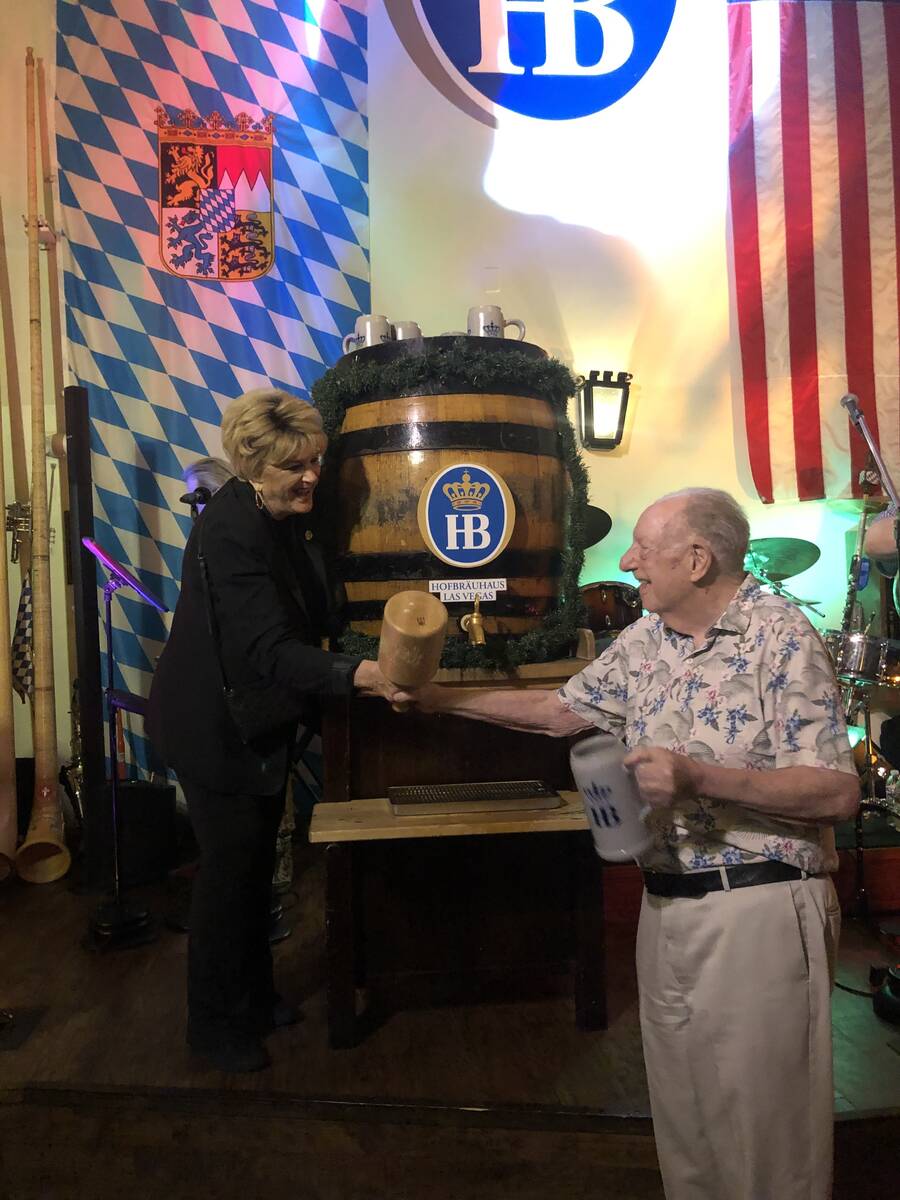 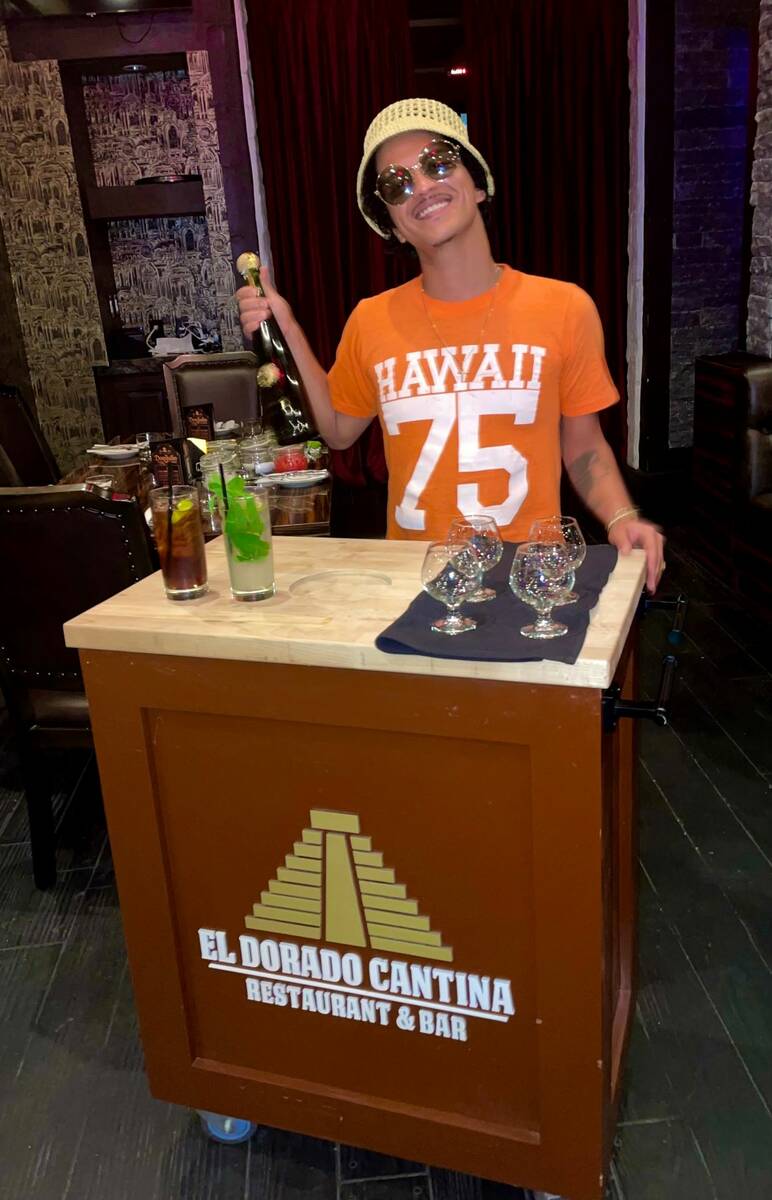 Wilder-Fury III isn’t the only slugfest in Las Vegas this weekend. The big bout in the arts world is Van Gogh vs. Van Gogh: The Brush-Off.

“Immersive Van Gogh” has opened at the Shops at Crystals, a grand venue in the previously unoccupied space on retail center’s top level. This is an artistically moving experience, featuring the works of the tormented Dutch artist who committed suicide at 37. The images are drawn from such famous works as “Sunflowers,” “Irises,” “The Potato Eaters,” “Starry Night,” and “The Bedroom.”

These paintings spill artfully around the room,slowly, liquid-like. The effect is trippy, cathartic, “Yellow Submarine”-esque. It’s a bit dizzying to observe such images as sunflowers, clouds and the artist’s famed self-portrait slowly floating by. It’s a different sort of escape room.

But we can’t escape the artistic happenstance that there are two such immersive exhibits now running in Vegas.

“Immersive Van Gogh” is actually the second Van Gogh exhibit to open in Las Vegas (though it was actually the first to be announced). Similarly, “Van Gogh: The Immersive Experience” has been running since April at The Portal at Area15. That attraction was due to close before the “Immersive Van Gogh” show opened, but has been extended through Oct. 19. The two shows will run concurrently until that date.

The Crystals venue is open from without question the more long-term attraction. It will be operating through March, announced during Thursday’s preview party. Hours are 11 a.m.-10 p.m. (information is at immersivevangogh.com).

Apart from Vegas, the two shows have also been cross-booked in New York, Houston and Dallas. “Immersive Van Gogh” producers say the “Van Gogh: The Immersive Experience” followed the leader, tapping into existing popularity from the original exhibit in Paris, which ran for February 2019-January 2020.

The Area15 exhibit’s creative team says they have planned independently. They contend their plans for Vegas were made far in advance of the “Immersive Van Gogh” opening. The show also offers a virtual-reality option, providing the goggles, so it’s a double-VR effect.

The Van Gogh works are original works are part of public domain. There is no umbrella licensing body for Van Gogh’s work, and thus no trademark infringement concerns. Consequently, “Immersive Van Gogh” is staged in 20 U.S. cities.

The Crystals exhibit brings Las Vegas credentials with Corey Ross, who is also co-producer of “Extravaganza” and “Potted Potter” at Bally’s, and “Wow!” at the Rio. Also, Massimiliano Siccardi, routinely referred as “the Steven Spielberg of immersive installation art shows,” is a lead creative mind in the project.

Massimiliano has video-mapped the venue’s walls, floors, columns and pillars. The circles on the floor are for social distancing, but if Thursday’s opening is any indication, they are mostly ignored. Composer Luca Longobardi and art director Vittorio Guidotti have also created immersive art exhibits in Europe, and the investment is clearly intended to be long-term.

For comparisons between the Van Gogh show leaving Vegas and the one, coming in, the Crystals attraction covers about 30,000 square feet, while The Portal is a little less than 7,000. There is more room to move, and a lot more display territory, at Crystals. The new exhibit can be turned into a late-night club. You could even create a duel entertainment amenity, lace up the roller slakes and wheel around the venue for a private party. Or, host yoga or Pilates classes amid all that artistry.

The organizers might not want to go that far. Maybe such ideas are not respectful of the show’s artistic merit. But when the legendary painter becomes a star on the Strip, anything Goghs.

Column fave Eldorado Cantina at Tivoli Village has launched its nightlife partnership with Bruno Mars and his Selvarey Rum liquor brand. “Latin Night” kicked off Thursday and runs weekly from 9 p.m.-1 a.m. I swept in this week and performed something akin to a cha-cha, reminding in a perfect world I would be taking dance lessons from Derek Hough.

I also said hello to superstar DJ Steve Aoki at the second-level VIP annex. Puro Vicente and Space to Pace had the place jumping. Mars himself stopped in a week and a half ago to pose with his product, which has been in high demand during his shows at Park Theater. We’d be sending photos of this activity on social media, but, you know, the phone thing.

No matter. We here the recording superstar has tentatively planned to be at one of these events. I’ll catch him on the dance floor.

Former Las Vegas Mayor Oscar Goodman returns his dinner series at Oscar’s Steakhouse at the Plaza on Nov. 17. The subject matter is “The Crime of the Century” (meaning last century), the assassination of Judge John Wood. This is an especially delicious topic for Goodman, who defended marijuana kingpin and vaunted Vegas high roller Jimmy Chagra in that case. Cocktail hour is 6 p.m., dinner at 7, hit plazahotelcasio.com for details.

The Foundation for Assisting Seniors holds its second annual gala at 6 p.m. Oct. 16 at M Resort. Vegas crooner Mark OToole is the showman. Yours truly is honorary chair. We’ve gotten to know the folks at FAS over the past few months, and visited their facility in Anthem in Henderson.

We have learned that the facility owns more than 3,100 pieces of what is termed “durable” medical equipment (more than 260 manual wheelchairs, about 30 scooters, more than 150 hospital beds, 350 walkers). Equipment ranges power chairs, power scooters, power lift chairs, to Hoyer Lifts, canes and crutches. The Foundation is run by volunteer staff, supported by donations and sponsorships.

The Oct. 16 program includes dinner and a live performance, auctions live and silent. FAS provides assistance on a per-call basis, very simple and organic, for a growing need.

Juice on the loose

The Soul Juice Band, headed up by the great front man David Tatlock, is the featured Las Vegas artist at Tuesday night’s Golden Knights home opener at T-Mobile Arena. The band’s latest single, “Brand New Day,” will be played for the capacity crowd of more than 18,000. This is on the same day the single streams on all digital platform. The hits aren’t limited to the ice, music fans.

May the spirit of wailin’ Van Halen live for eternity. The rock experience that is Jeff Duncan’s “EddieFest Vegas,” a tribute to the late Eddie Van Halen, is set for 9 p.m. (doors at 8 p.m.) Saturday at Danny Koker’s Count’s Vamp’d club on 6750 w. Sahara Ave.