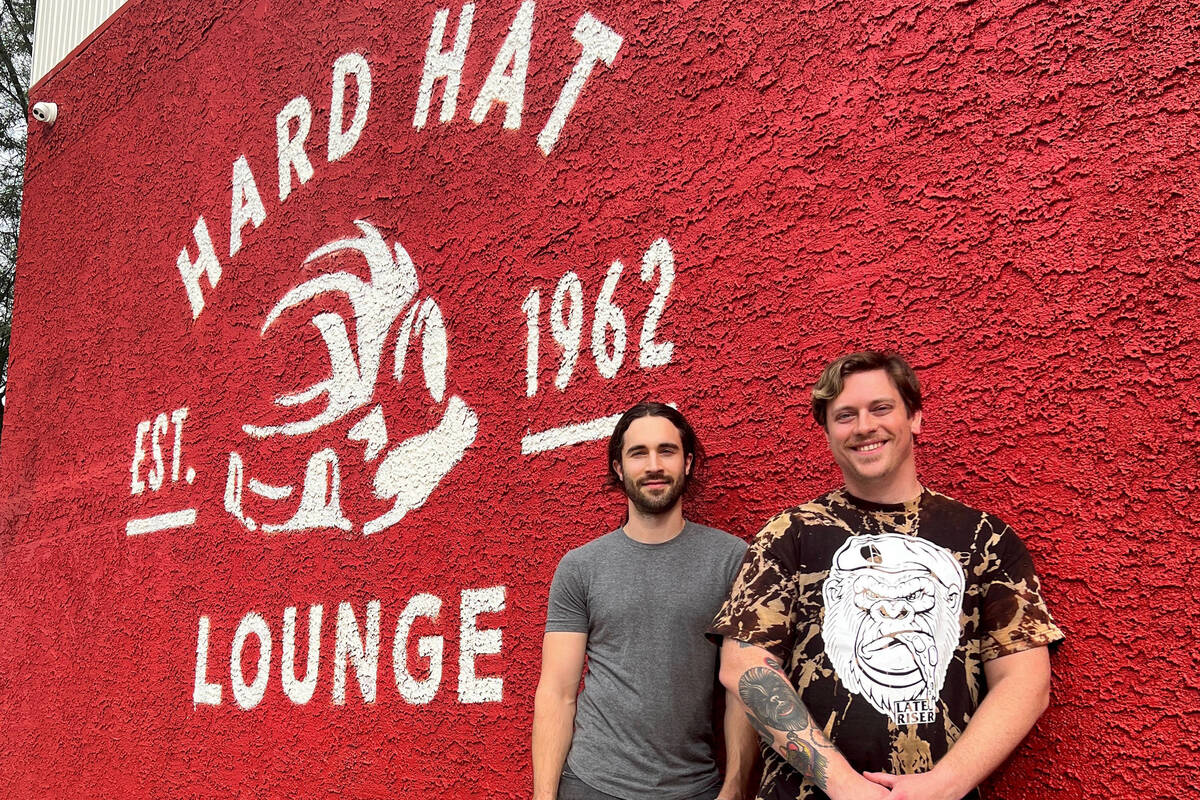 Frankie Sidoris, left, and Robby Cunningham are partners in the legendary Hard Hat Lounge, which opened in 1962 in Las Vegas. (Hard Hat Lounge) 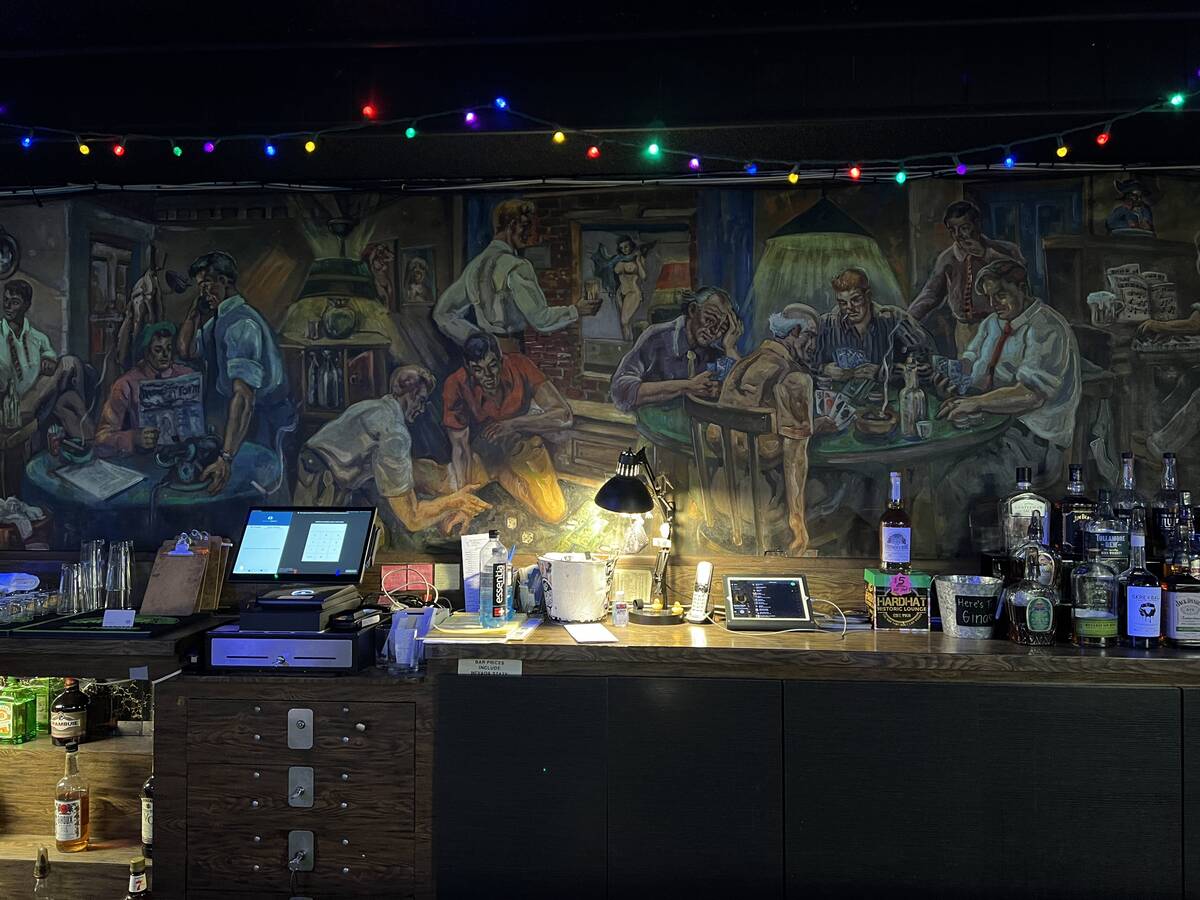 A look at the mural behind the bar at Hard Hat Lounge, which has been purchased by Las Vegas rock musician Frankie Sidoris and Robby Cunningham of Guerilla Pizza. The famous tavern opened in 1962 in Las Vegas. As legend has it, a club regular created the painting the year Hard Hat opened to settle a bar tab. (Kevin Cannon/Las Vegas Review-Journal) @KMCannonPhoto 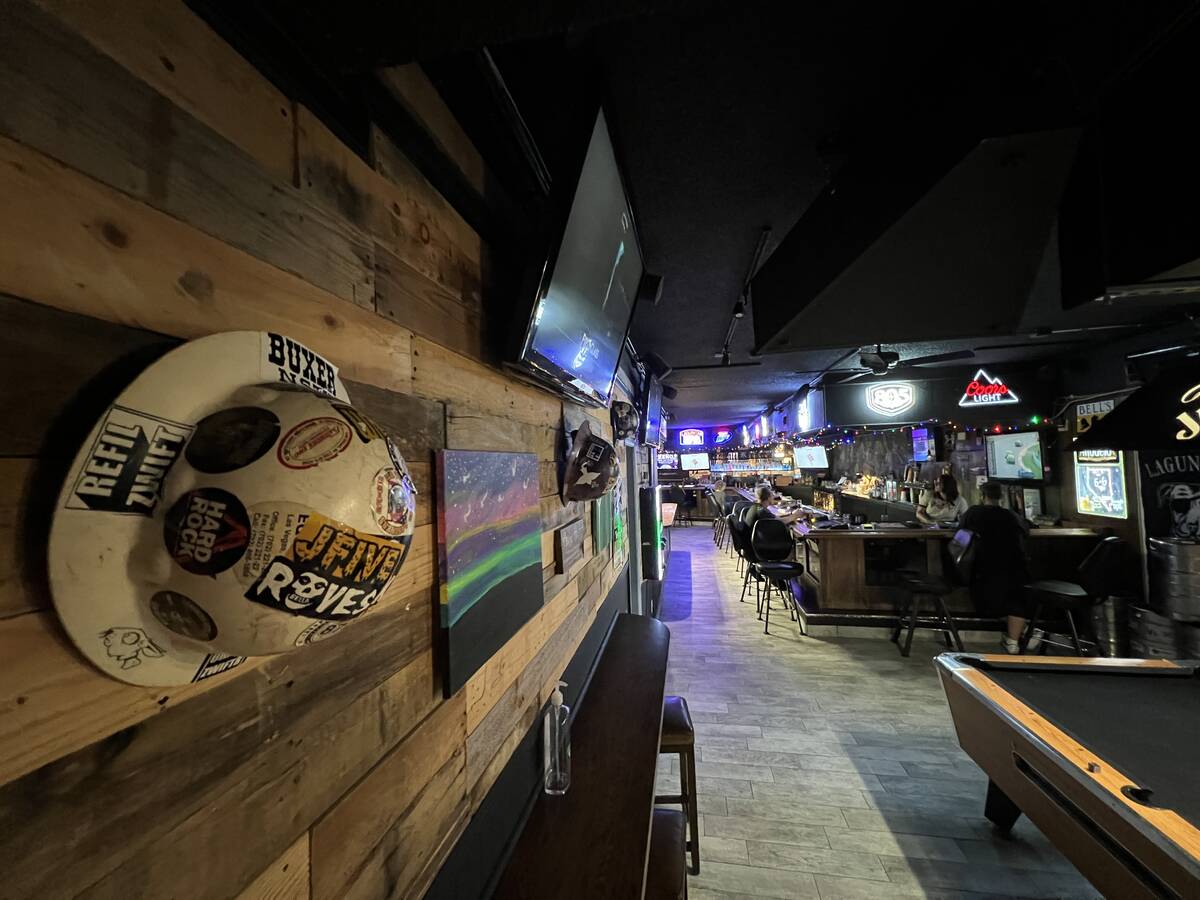 A look inside Hard Hat Lounge, which has been purchased by Las Vegas rock musician Frankie Sidoris and Robby Cunningham of Guerilla Pizza. The famous tavern opened in 1962 in Las Vegas. (Kevin Cannon/Las Vegas Review-Journal) @KMCannonPhoto

It’s sort of amazing the place wasn’t demolished over the years, given the city’s propensity for leveling its history. But since opening as a diner in 1962, the stoic Hard Hat Lounge at 1675 Industrial Road has meant business. Especially for locals.

The Hard Hat is in a rarefied category. Only Atomic Liquors, which opened in downtown Las Vegas in 1952, pre-dates the cozy tavern. Dino’s Lounge opened in ‘62, too.

It’s appropriate, then, the Hard Hat has been taken over by a hard-rocking Las Vegas native, Frankie Sidoris, and partner Robby Cunningham of Guerilla Pizza. The guys seized the keys Aug. 30. Monday is a special-hours, soft opening from 5 p.m.-2 a.m. Then hours shift to 11 a.m.-2 p.m. weekdays, 11 a.m.-3 p.m. Fridays and Saturdays, 11 a.m.-2 a.m. Sundays. All those closing times are fluid, depending on business.

Sidoris and Cunningham are renovating the space, starting with a fresh coat of paint, saving the mural painted on the main bar wall in 1962. The story is, the work was hand-painted by Frank and Vicky Bowers, who were Hard Hat regulars. The painting was to pay off Frank’s bar tab.

Drinks are being properly slung, with pizza served by by Cunningham’s company, which celebrates its second anniversary Oct. 1. Expect a formal opening in mid-October.

Eventually, Hard Hat will showcase a regular schedule of live music, karaoke, an open-mic night, and an industry night. Entertainment is being planned for the indoor and outdoor stages, where the guys are also planning a series of guest-star bartenders, canvassing the Vegas entertainment and sports scenes.

“We’re going to have all sorts of events,” Sidoris says. It will take about 10 months for approval from the Gaming Board to allow gambling in the club. “So that means we’re just going to own and operate just as a regular bar and a pizza place until we get that approval.”

Sidoris and Cunningham had been talking for months about partnering in a club since Cunningham got to Las Vegas. “Robby was presented this opportunity, and he came to me and just said, ‘What about buying the Hard Hat?’ And it made sense.”

Cunningham says, “I am beyond excited to be taking over one of the oldest, coolest dive bars in the entire city of Las Vegas.” He and Sidoris have become close friends since Cunningham arrived in town. They have strengthened the bond in acquiring the Hard Hat.

Sidoris’s is a uniquely Las Vegas success story. He’s the son of Angela Stabile, who has co-founded Stabile Productions with her husband, Matt Stabile, and is also an original “Crazy Girl” at Riviera. Sidoris’s father is local casino icon Frank Sidoris, who works as a pit boss at Resorts World.

Sidoris is also a wildly talented guitarist who has alternately performed with Slash Ft. Myles Kennedy and The Conspirators and Wolfgang Van Halen’s Mammoth WVH. That crew was actually the first rock band to ever play Allegiant Stadium when they opened for Guns N’ Roses in August 2021.

But for now, Sidoris is preoccupied with reviving this famous tavern.

“This is a lot of work, but we are excited,” he says. “It’s fulfilling a dream. We are ready to go full blast.”

How we start it: @Imaginedragons, a long way from The Pub at Monte Carlo … @AllegiantStadm #RJnow @reviewjournal pic.twitter.com/RrhUk3UuPW

Cirque has performed to the music of The Beatles, Michael Jackson and Elvis in Las Vegas. But they had not performed onstage in a show at Allegiant Stadium until Saturday, when members of “Love” and “Mystere” surprised the crowd during Imagine Dragons’ epic homecoming performance. Members of both troupes danced, spun and soared through “Sharks.”

Both shows are off this week in “extended darks.” Cirque President Eric Grilly came up with the idea of showcasing the artists. PR rep Ann Paladie contacted the band on Aug. 23. Under artistic director Tim Smith’s direction, the number came together in about a week. That sounds like not a lot of time, and it isn’t, unless you’re Cirque.

Imagine Dragons front man Dan Reynolds thanked all the fans who stayed with the band on its long journey to fame. He pointed out the days when Imagine Dragons “played for 50 people at O’Sheas.” That’s a reference to the lounge at the old O’Sheas hotel-casino, which closed in June 2012 as Caesars Entertainment redeveloped that stretch of the Strip. To the band’s credit, 50 was actually a solid crowd at the old O’Sheas. It was the type of crowd that prompted caused other bands to ask, “What’s your secret?”

Get a buzz at McMullan’s

The St. Baldrick’s shave-a-thon returns 11 a.m.-9 p.m. Saturday at McMullan’s Irish Pub, where the campaign started 16 years ago. Yours truly and Enoch Augustus Scott of “Zombie Burlesque” are again co-hosting from 3 p.m.-4 p.m. The event will livestream at mcmullansirishpub.com, where donations are accepted and where you can find additional information.

The McMullan’s event has moved to September, to serve as the midpoint between the shave-a-thons around the city at New York-New York and other locations. The shift to September was made necessary by the pandemic shutdown. Co-hosts Lynn and Brian McMullan have decided to keep the event in September, with the others returning to March.

McMullan’s Irish Pub is also celebrating its 20th anniversary this year. The McMullans initiated St. Baldrick’s events in Las Vegas to honor their daughter Kyra, who died of a brain tumor in 1997. She was 2 1/2 years old. Those who participate in the McMullan’s shave-a-thons are encouraged to wear red shoes, to show solidarity in Kyra’s memory.

Sax great (and CHA frequenter) Jimmy Carpenter celebrates his album-release party for “The Louisiana Record” from 10 p.m.-2 a.m. Friday at the original Sand Dollar Lounge at Polaris and Spring Mountain Road. Carpenter is a monster musician. The scene is creatively fertile, the pizza a must. And no cover.