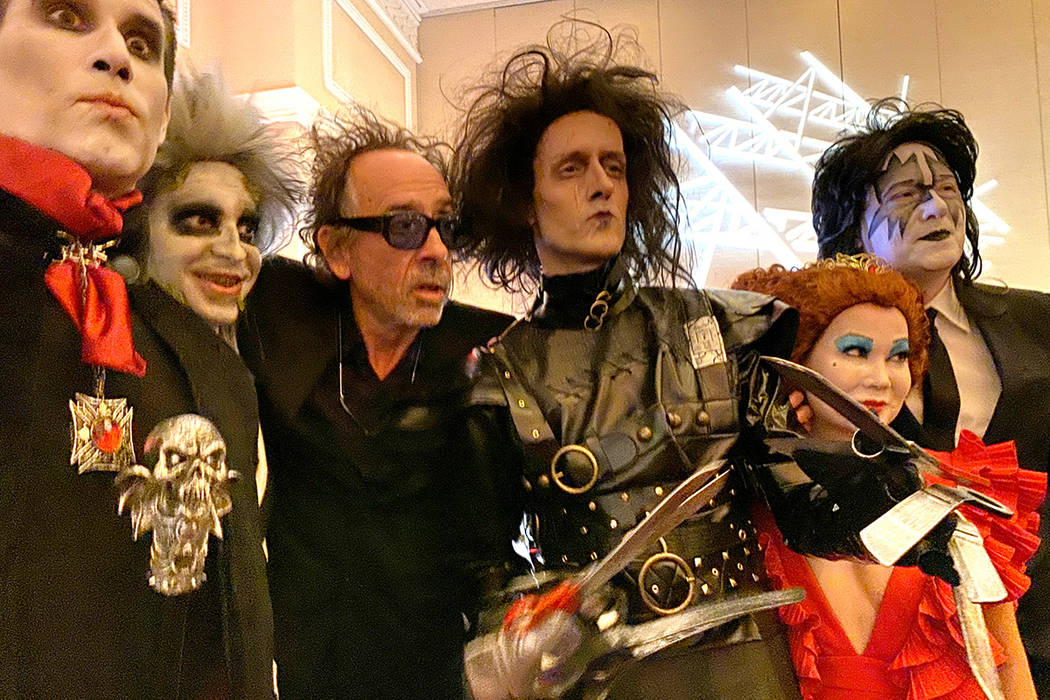 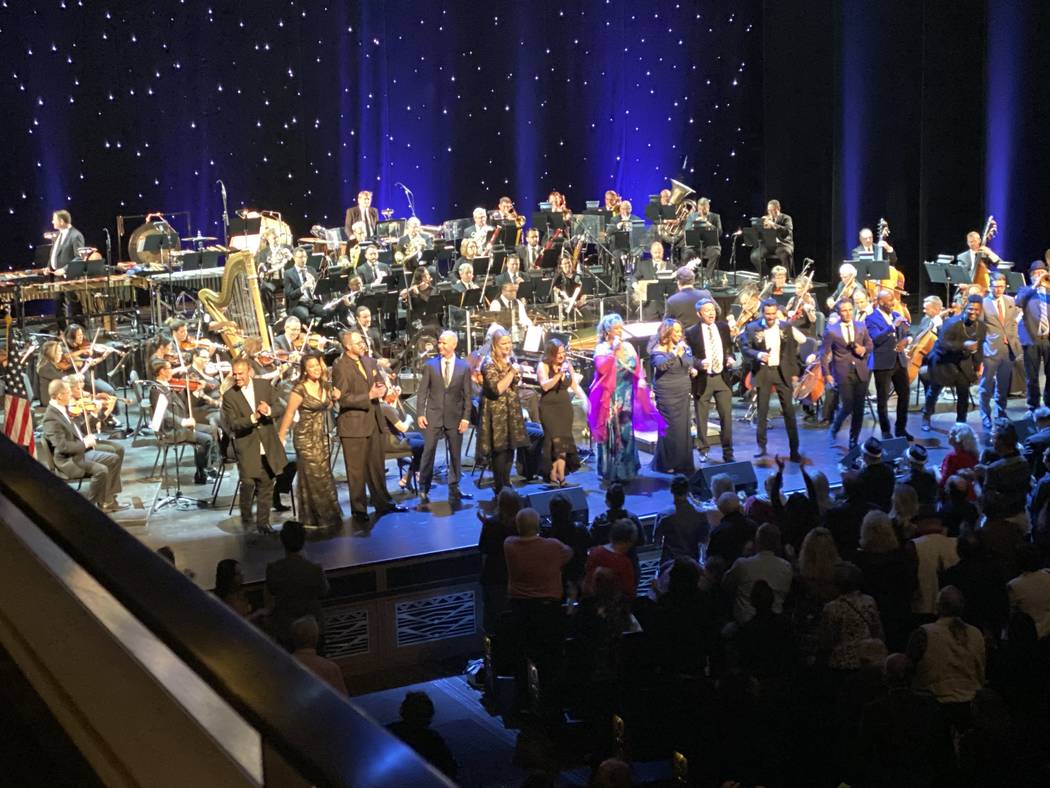 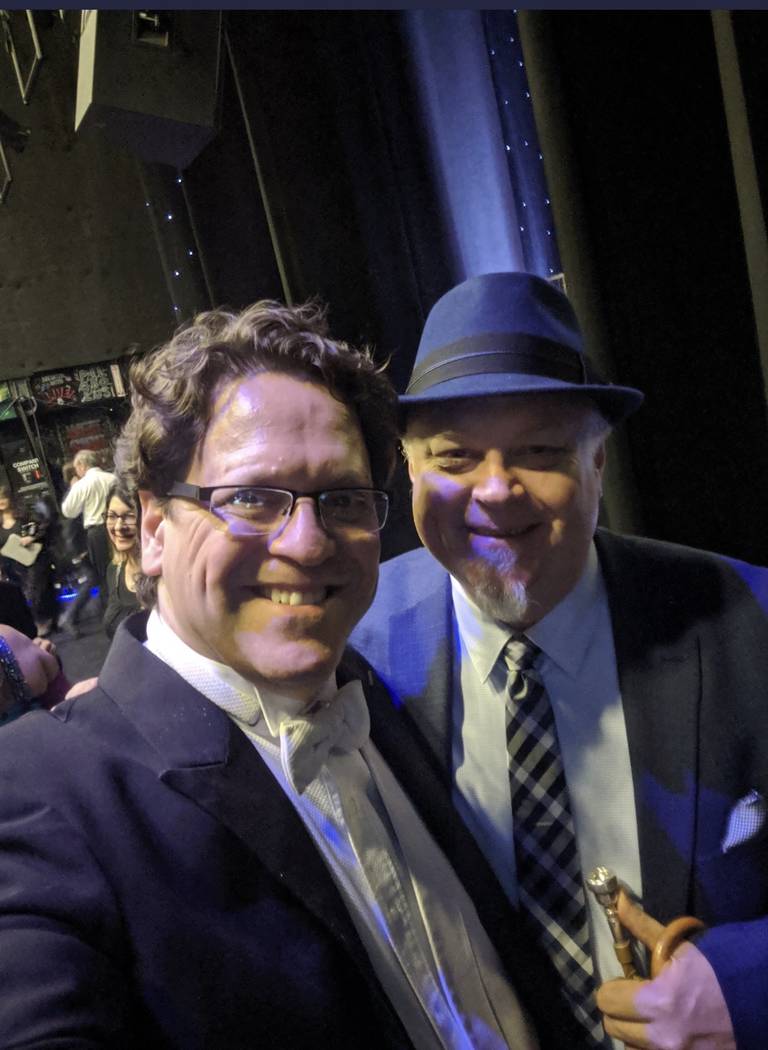 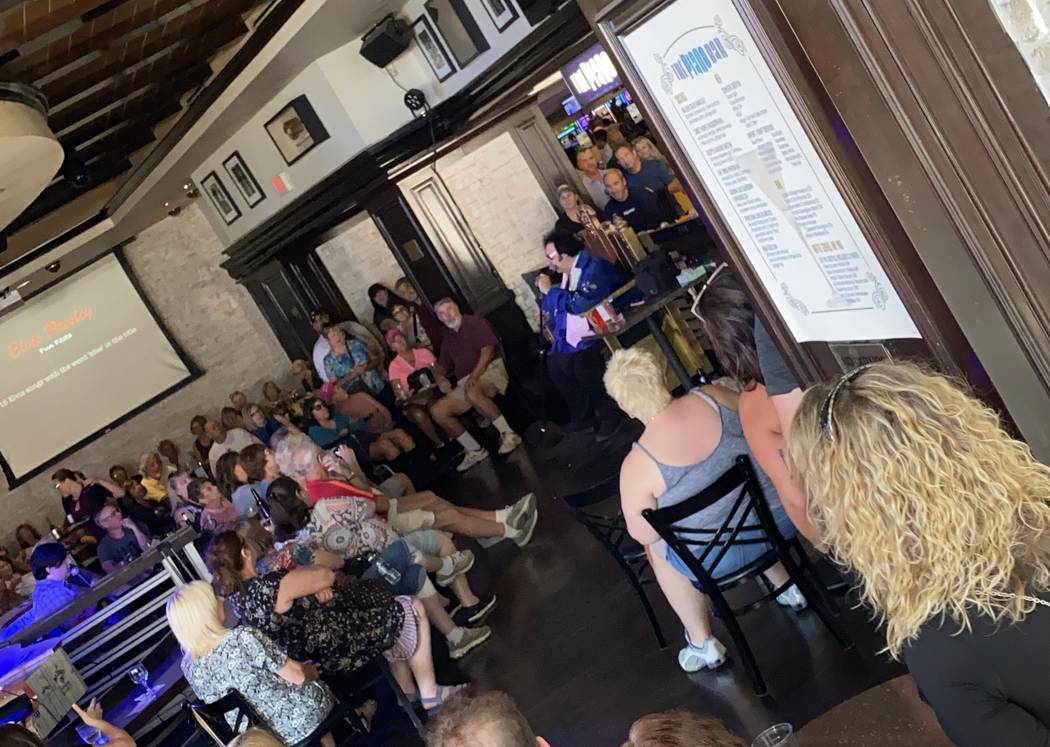 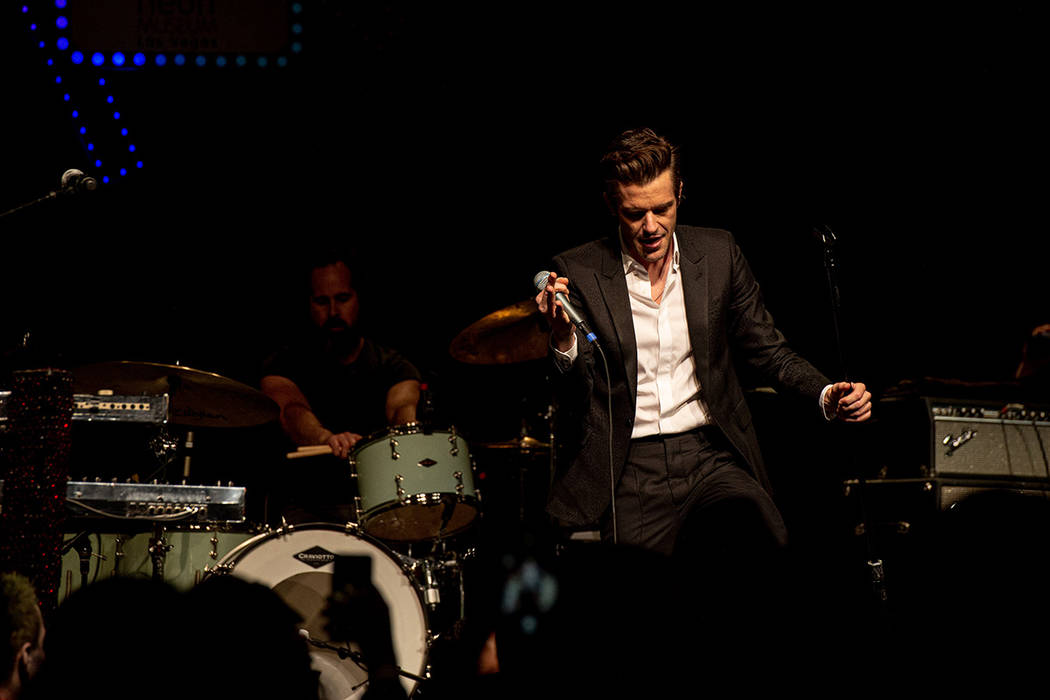 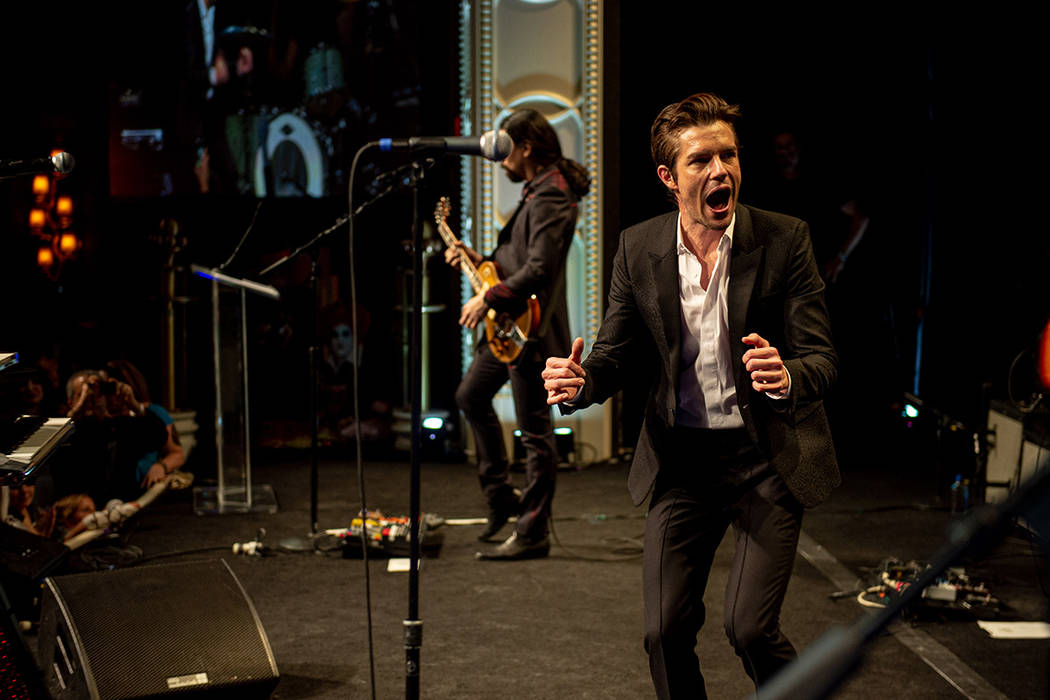 The artistic connection between the Neon Museum’s Boneyard Ball at Wynn Las Vegas and “Very Vegas Showcase” at the Smith Center was, oddly enough, The Killers.

Hollywood film director Tim Burton, whose “Lost Vegas” art exhibit opens Tuesday at Neon Museum, is in a place in life where he can simply say, “I’ll call Brandon,” and arrange for the band to play at Boneyard Ball.

Brandon is Flowers, the Killers’ front man, and the band answered the bell to close the annual charity gala, where Burton was on hand to mark the premier of his Vegas exhibit.

Downtown, at about that moment, Las Vegas Philharmonic Music Director Donato Cabrera was conducting the orchestra during “A Very Vegas Showcase” at Reynolds Hall. The production served as a landmark performance, mixing the best of The Composers Showcase of Las Vegas original selections with the symphony playing the music of such legends as Elvis, Frank Sinatra, Sammy Davis Jr., George Gershwin, Ella Fitzgerald and Duke Ellington.

Cabrera is always open to expanding the Philharmonic’s scope and scale, and has often sought to connect with Las Vegas superstar rock groups —the top tier of The Killers, Imagine Dragons and Panic! At the Disco — for a symphonic performance.

After Saturday night’s show, Cabrera went out of his way to mention, “I really want to expand this idea and work with any of these rock bands, if we can warm them up to the idea.”

As an example such an artistic partnership, Cabrera holds up Metallica’s recurring collaboration with the San Francisco Symphony. The Bay Area artistic forces performed at the inaugural show at Chase Center in San Francisco on Oct. 3. Such a show featuring the Philharmonic and any of those bands would rock Reynolds Hall. I’d not rule out any of the Strip arenas, either, for a symphonic spin through “Mr. Brightside.”

As Cabrera conducted, TCS co-founder Keith Thompson emceed. Among the night’s innumerable highlights: Eric Jordan Young’s performance of “Mr. Bojangles,” Travis Cloer — who played Frankie Valli in “Jersey Boys” in Las Vegas — singing, “Fly Me to the Moon,” appearances by trumpet master Kenny Rampton and rising piano/singing virtuoso Patrick Hogan of the UNLV Jazz Studies program; Michelle Johnson’s rendition of “Embraceable You,” the return of Vita Corimbi Drew (who performed at the very first Composers Showcase in the spring of 2006), and Richard Oberacker’s sampling of his upcoming musical, “Bruce.”

Oberacker in particular has proven the value and appeal of the monthly Composers Showcase series during its 13-year history. He and writing partner Robert Taylor began showcasing music from the musical that would become “Bandstand” at during TCS shows at Myron’s Cabaret Jazz in 2013.

That Broadway musical, uncommon as it originated in Las Vegas, closed in September 2017 at Bernard B. Jacobs Theater after 166 performances. “Bandstand” is going out on a national tour at the end of the month.

Oberacker’s “Bruce,” following a similar developmental arc, tells the story of Steven Spielberg’s 1975 thriller, “Jaws.” Bruce was the name given to the film’s famed mechanical shark, named for Spielberg’s lawyer, Bruce Ramer. Keep track of this one.

Sixty! Marie Osmond celebrated that birthday on Sunday. As a tribute, brothers Alan, Wayne, Merrill and Jay from the original Osmond Brothers group are performing together for the last time on “The Talk” at 2 p.m. Monday on KLAS-TV (Channel 8).

The brothers debuted on the “Andy Williams Show” in 1959, effectively launching the Osmonds’ entertainment fiefdom.

Donny & Marie’s closing show at Flamingo on Nov. 14 is to be the final time any of the original Osmond siblings will appear onstage together. Sixty years is a pretty fair run, for all involved.

Tuesday night’s “Fantasy” 20th anniversary performance is unique as it brings back the show’s vocalist for nine years, Stephanie Sanchez, and her daughter, Shelby Jordan. Both have been in the “Fantasy” family, the rare mother-daughter tandem to have appeared in the same adult revue, though at different times.

Sanchez — in those days known as Stephanie Jordan, and also the nickname “Singer” — fronted the show for nine years ending in 2009. Jordan was a swing in the production in 2018, and is now a full cast member in the Stabile Productions show “X Country” at Harrah’s.

Cirque du Soleil is opening “R.U.N” at Luxor on Oct. 24, a $40 million project that is the company’s seventh Strip production, and first to open in Las Vegas since “Michael Jackson One” premiered at Mandalay Bay in 2013.

But the company has plans — under its corporate umbrella — for the former Bank Nightclub space at Bellagio. Expect a production from The Works Entertainment, founded by Simon Painter and Tim Lawson, under the working title “CaBARet,” to open next spring.

The Works is also the company that has produced “The Naked Magicians,” which this year headlined Brad Garrett’s Comedy Club at MGM Grand; and also “Circus 1903” at Paris Theater in 2017. Cirque acquired The Works in February.

The new show at Bellagio is to feature a cast of 12-15 beautiful people, stationed at a central bar that turns into a stage. Expect specialty acts and a lot of comedy, and also a cool hang afterward.

How about Big Elvis, the esteemed Pete Vallee? He still packs the Piano Bar at Harrah’s in his no-cover-charge showcase. Vallee has been churning out the Presley classics for 22 years in VegasVille, starting with the now-closed Roadhouse bar on Boulder Highway in 1997. Catch him at 2 p.m., 3:30 and 5 p.m., Mondays, Wednesdays and Friday. If you’re in the room, you might be called up to perform “Viva Las Vegas” as “Little Elvis,” even if you are a member of Las Vegas media. …