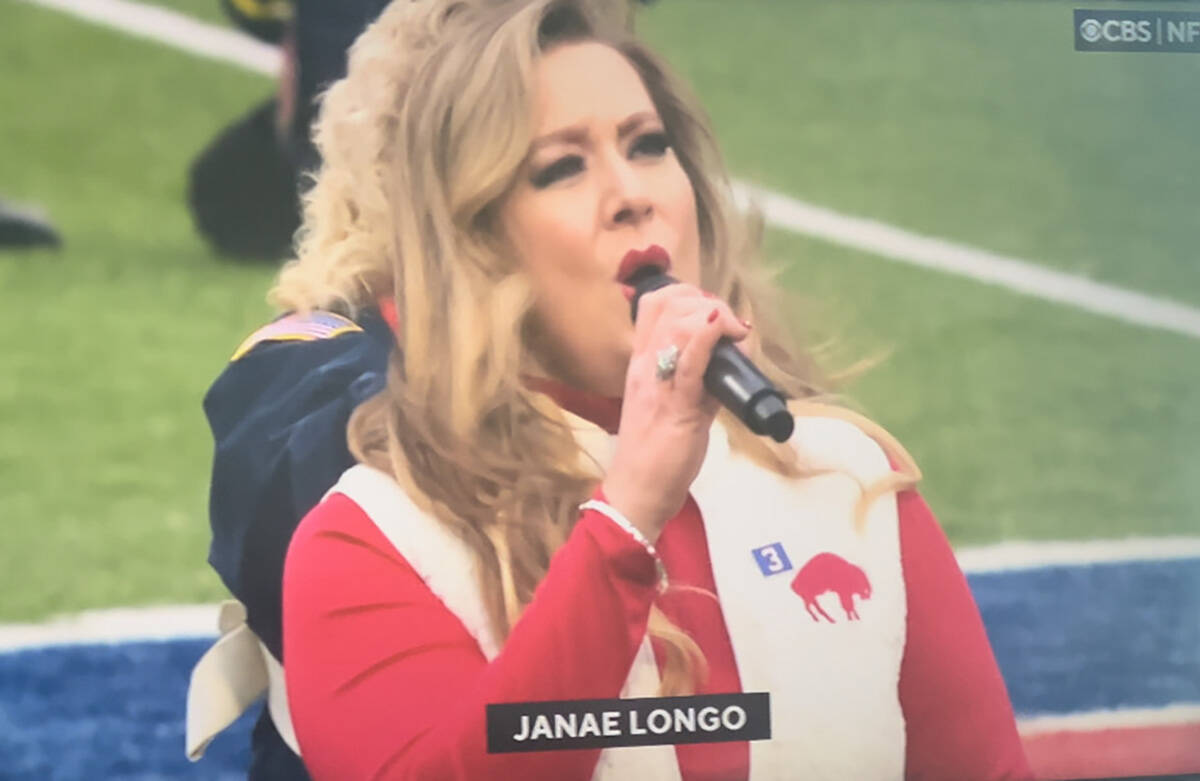 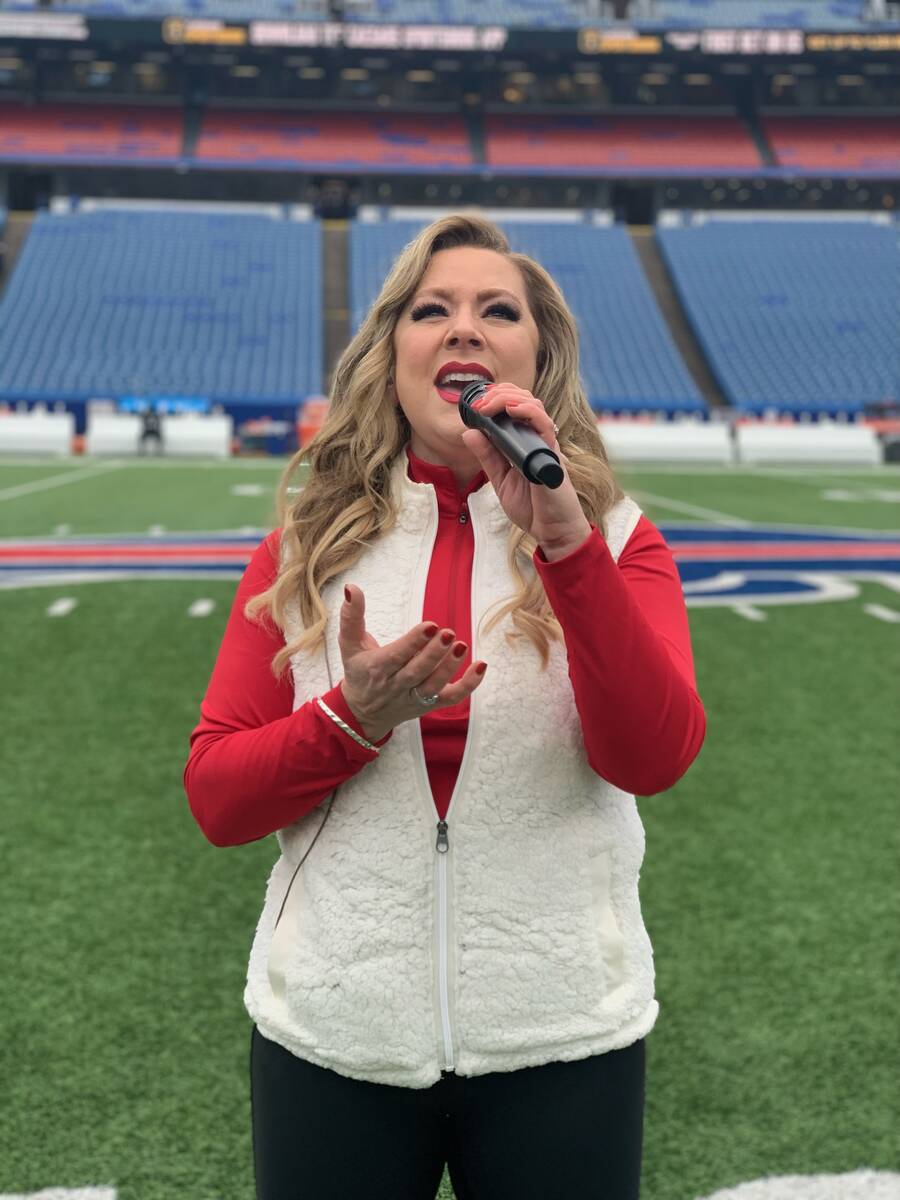 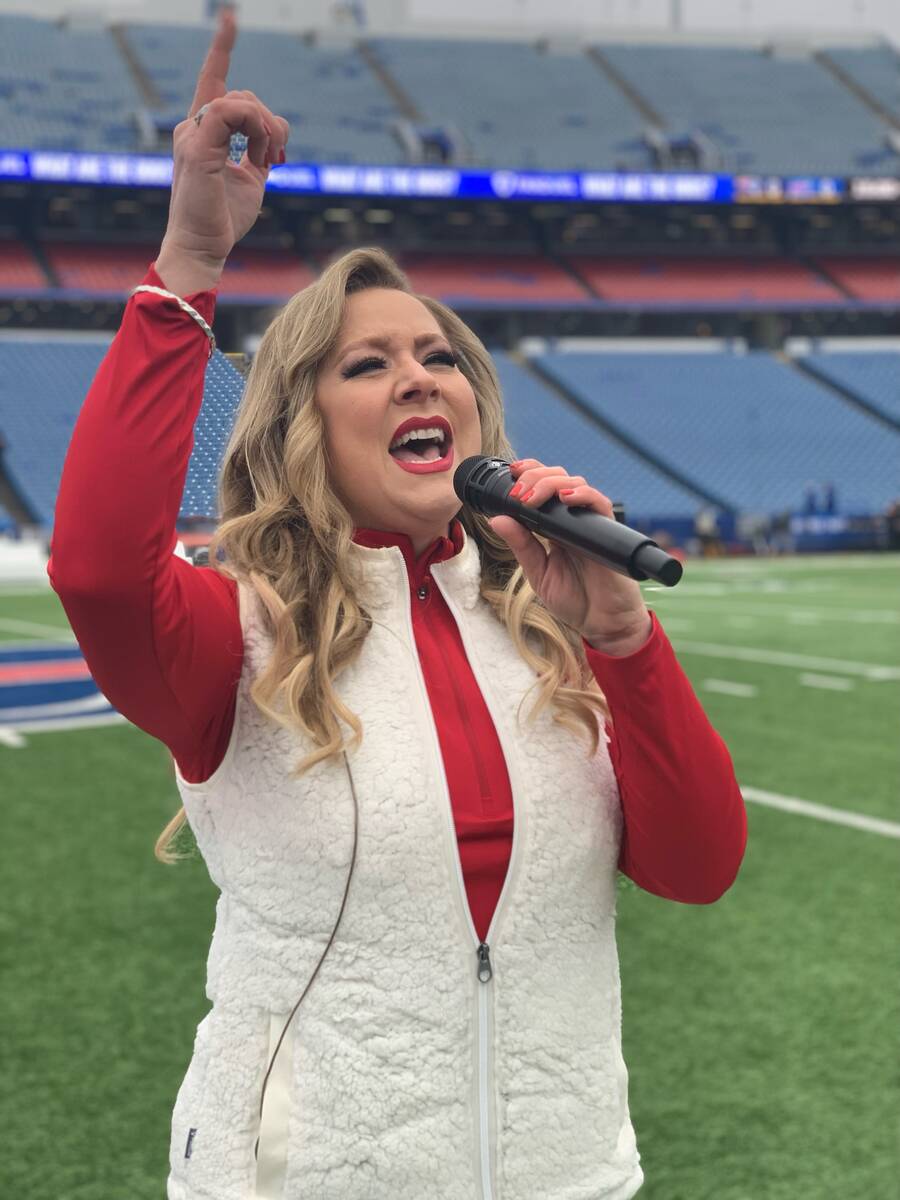 It took an extraordinary national anthem assignment to reunite Janae Longo with her loved ones in Buffalo on Sunday.

“I have my friends and family with me,” Longo said during a phone chat after Sunday’s Bills-Patriots game at Highmark Stadium in Orchard Park, N.Y. “ I am really happy to be home and be a part of it all.”

Longo is a native of the Buffalo area and a singer who portrayed Adele in “Legendary Divas” at the Tropicana from February through Halloween. Prior to the season, she had been asked to sing the anthem at the Bills regular-season finale against the Patriots. The game took on a heavier meaning during the week, when Bills safety Demar Hamlin collapsed during Monday night’s game in Cincinnati.

Fans around the country pulled for Hamlin to recover, with the player’s No. 3 highlighted on NFL playing fields and coaches wearing “Love For Damar 3” T-shirts.

With Hamlin’s inspirational recovery as a backdrop, Longo’s anthem performance made the CBS telecast. Not every anthem during the regular season makes the broadcast, but this one did.

After the roar subsided, Bills head coach Sean McDermott told her, “You did a wonderful job, thank you so much.” The home team beat the rival Pats 35-23. Longo had barely been seated when Nyheim Hines took the opening kickoff 96 yards for a touchdown to give Buffalo a 7-0 lead.

“I turned my back and heard this roar and it was, ‘What happened?’” Longo said. “The place was going nuts. It was our day.”

Longo had expected to be in Buffalo over the holidays, but her flight Dec. 22 was canceled. Instead, she flew out Wednesday, in time to take part in the family tailgate party. “We have wings, Polish sausage, a big flag. we have a lotta great things,” Longo said.

Longo was part of NFL history, given the nationwide interest in the Bills’ return.

“It was a little stressful, I was nervous in the beginning, but then I the joy of singing and doing what I do,” Longo said. “The Bills Mafia has come full-circle.”

Teller is returning to the Penn & Teller show at the Rio on Thursday night. The 74-year-old illusionist has been recovering from open-heart surgery on Sept. 29, and has not been in the show, full-time, since Sept. 25. But he did pop in with Penn Jillette and guest star Michael Carbonaro over the holiday run.

As Teller has been rehabbing, “The Tempest,” the production he and Aaron Posner developed nearly a decade ago is ending its well-received run at Round House Theatre in Bethesda, M.D. on Saturday. That series was extended because of high demand.

“The Tempest,” Shakespeare’s work that invokes ample magic and illusions, premiered in a carnival tent at Symphony Park in 2014. Producers are reviewing options for its next presentation. And, “Penn & Teller: Fool Us” returns to The CW at the end of the month, there is a tour of England in June, and “some TV stuff coming up,” we are told. We’ll be at the Rio for Teller’s return, for starters.

The Raiders continued to place a high priority on their in-game entertainment, the face of a rocky season and the team’s losing record. Ska-alt rock collaboration Sublime With Rome, which is bassist Rome Ramirez of Sublime, and guitarist Eric Wilson, performed the halftime show at Saturday’s season finale against the Chiefs. Singer-songwriter Gavin DeGraw performed the national anthem.

Rich Gannon lit the Al Davis Memorial Torch (or, powered-up the LED effect with the use of the remote). The great QB led the team to Super Bowl XXXVII in 2003, losing 48-21 to the Jon Gruden-led Tampa bay Buccaneers. Gannon is still in good shape, sporting a noble, gray-haired look.

We expect Las Vegas’ own David Perrico and the Raiders House Band to be back at Allegiant Stadium next season. The band has a great locals following, creating a pre-game scene under the Davis torch.

Raiders games can force a difficult call for how to spend a weekend afternoon in Vegas. Saturday afternoon, it was the Chiefs game or “Bugs Bunny At the Symphony” with Las Vegas Philharmonic at the Smith Center. Totally unalike events, like comparing apples and … carrots, I guess.

Swinging back to the topic of improv shows that have closed at The Venetian, “Freestyle Love Supreme” will have run 2 1/2 months when it hauls out Jan. 29. But that show has lasted longer than “Puppet Up,” which closed after six weeks in September 2016.

Resort officials were not interested in a comparison of the two shows. But both arrived with high expectations and famous pedigree. Henson is the son of legendary Muppet creator Jim Henson, And, from here, both deserved a better fate.

Crooner extraordinaire Ryan Baker is at Maxan Jazz Sushi & Jazz from 7 p.m.-10 p.m. Monday. Top talent around the horn with Patrick Hogan on piano, Jess Gopen on drums and Jeff Davis on bass. There is a $25 F&B minimum, per person. Go to maxanjazz.com for info.