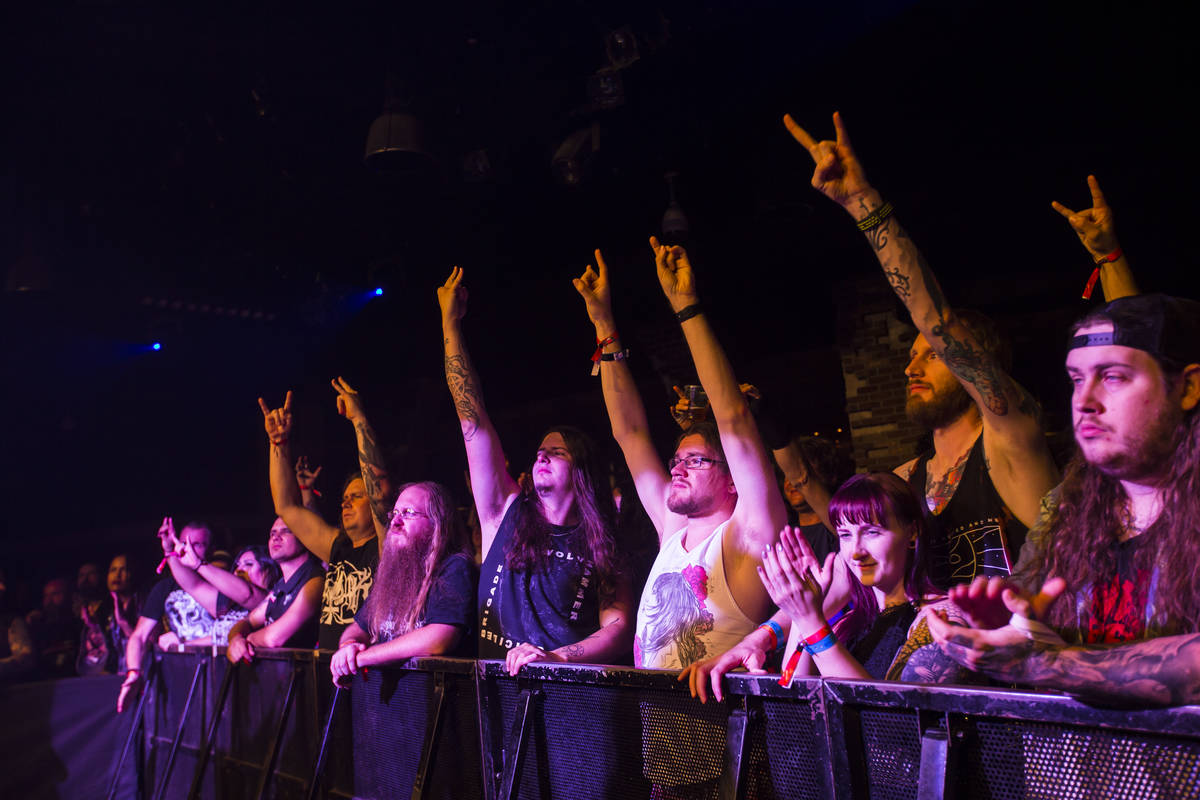 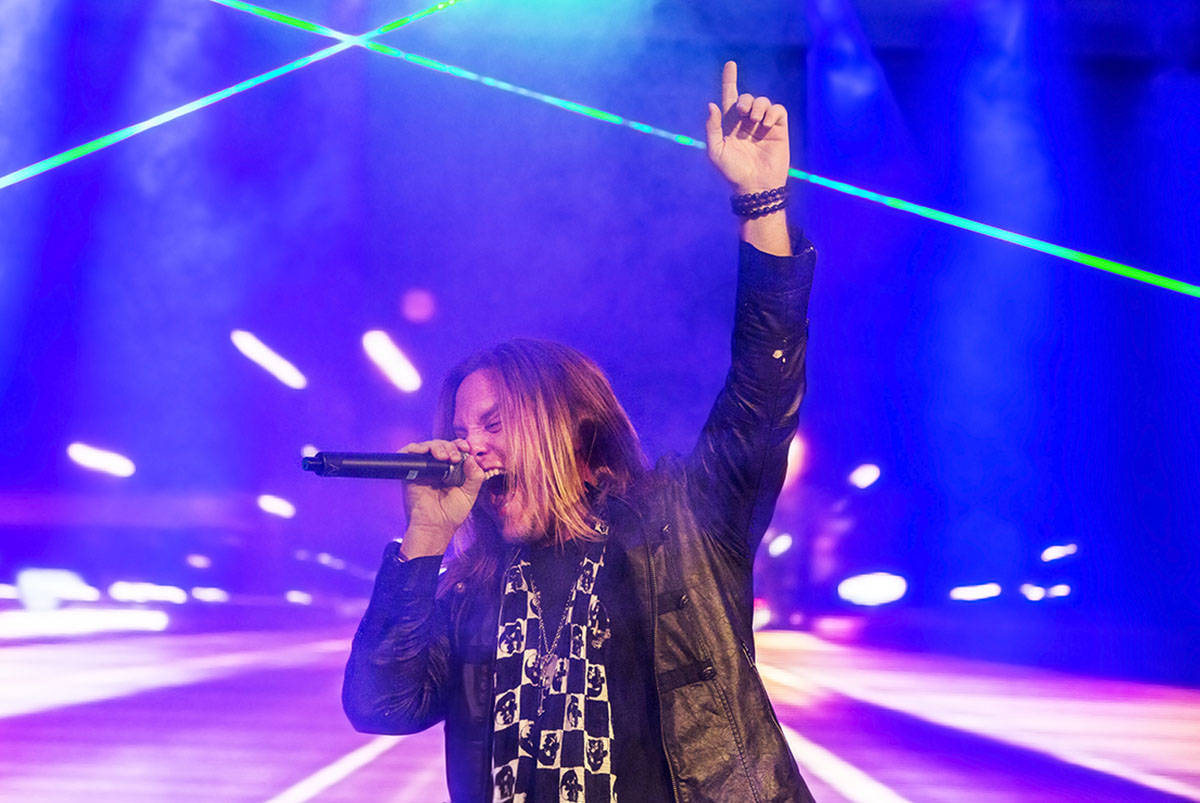 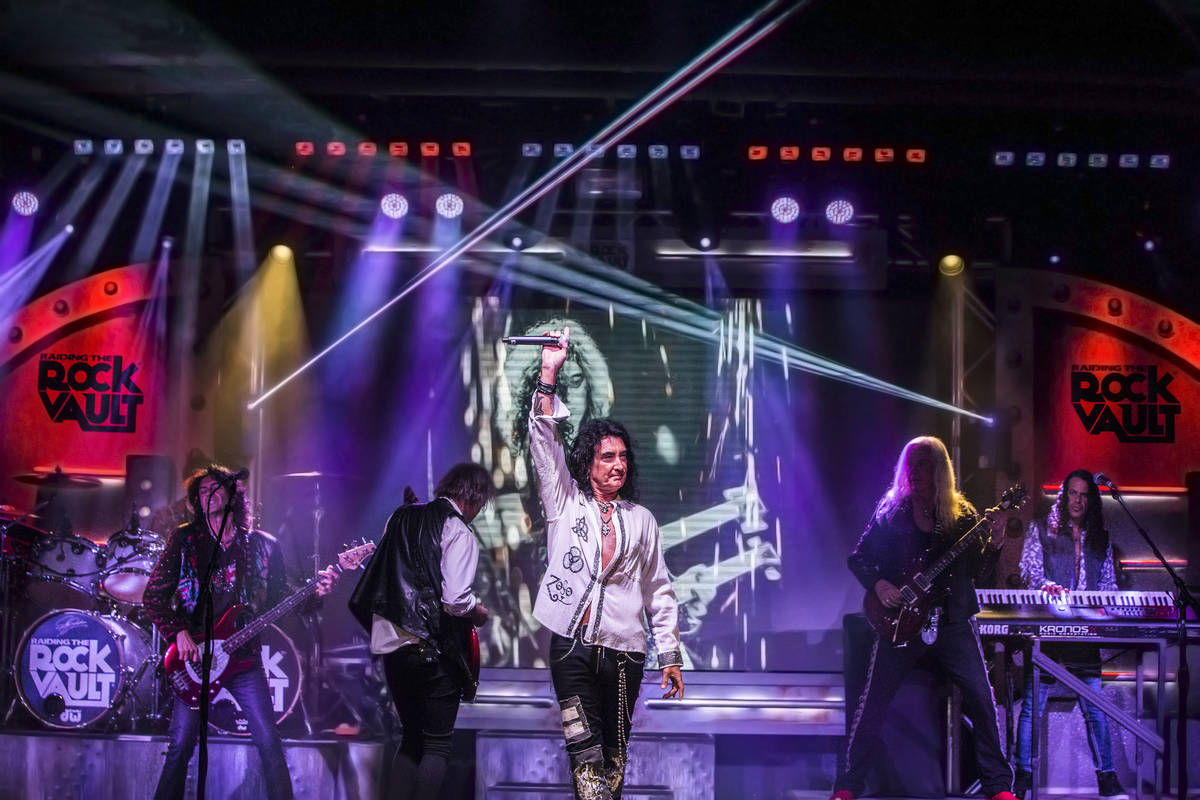 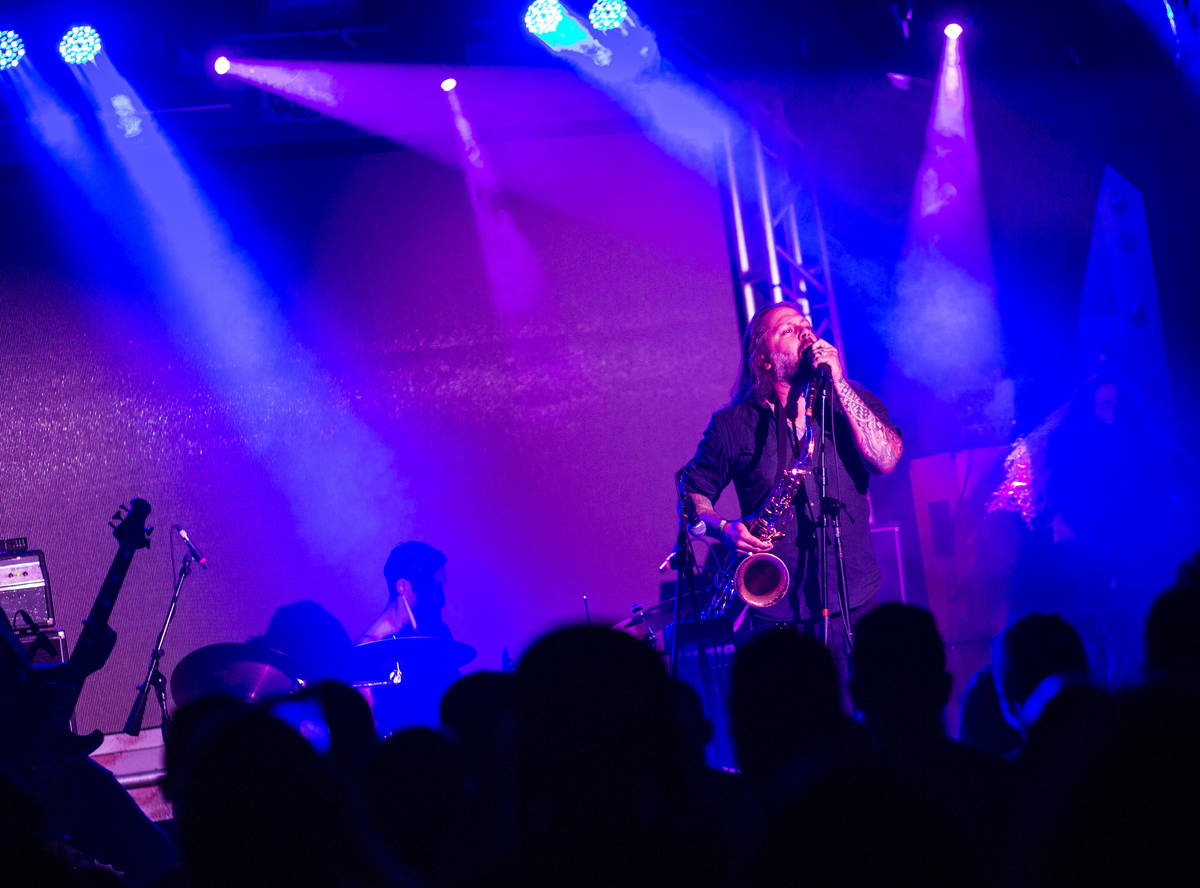 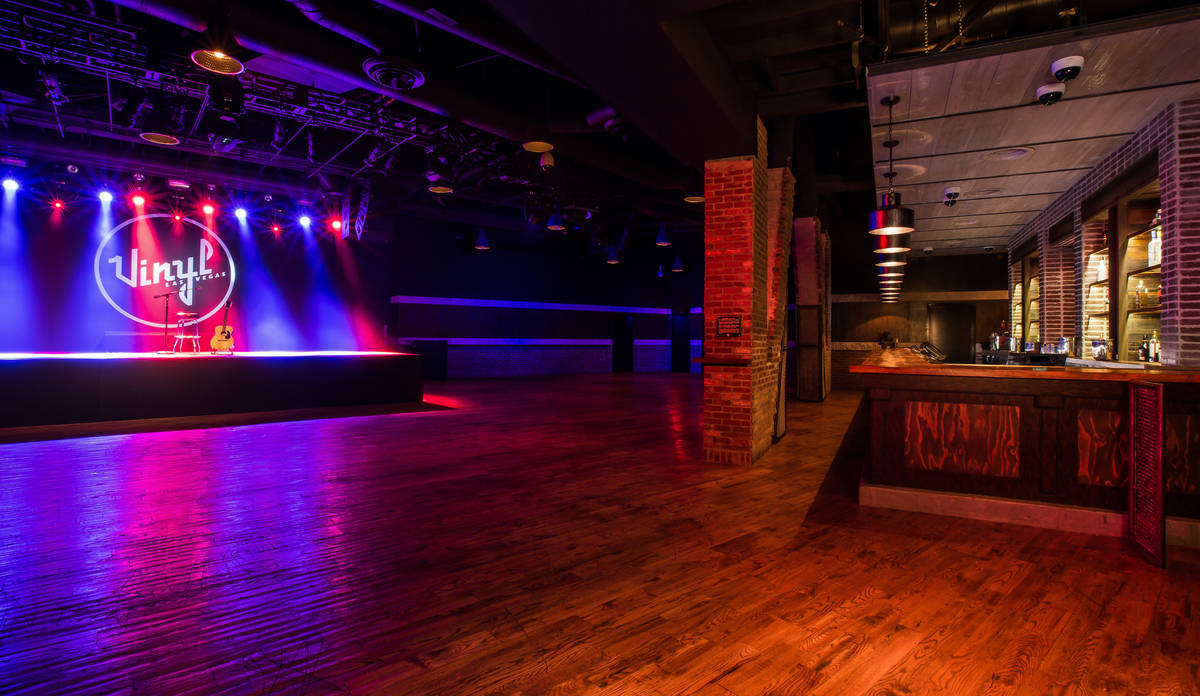 A look at the Vinyl at Hard Rock Hotel, which is turning over to 24 Oxford when the hotel reopens as Virgin Hotels Las Vegas in January 2021. (Erik Kabik)

Vinyl is being rebranded as a store that originally sold vinyl.

The former Hard Rock Hotel live-music club is flipping to 24 Oxford when Virgin Hotels Las Vegas reopens Jan. 15. The name is inspired by the first Virgin Record Store, which opened at that address in London in 1971.

Impress your friends by knowing that the first album ever sold at Virgin Records was “Electronic Meditation” by Tangerine Dream, sold by founder Richard Branson himself.

The change in name might be the most obvious alteration to the 688-capacity venue, which opened in July 2012. Hard Rock Hotel owns the Vinyl title and stamped it on its live-entertainment venue in Lake Tahoe. Virgin Hotels is also renaming The Joint and, along with booking partner AEG Live, is seeking a name sponsor before settling on a title.

The Mondays Dark charity show spent three years in the venue, and the G2E Casino Legends Awards have also held forth at Vinyl.

“Vinyl lays out very nicely, and we’ve thought of repositioning the stage and turning the room around, but those plans were dismissed by the entertainment team,” J.C. Hospitality Chief Operating Officer Gary Scott said in a phone interview Friday. “We’ve had very positive feedback from the artists and agents about how favorably the room is. So we’ll add some new floor finishes, new bar tops, expanding the VIP section, but for the most part it will stay intact.”

J.C. Hospitality heads up Virgin Hotels Las Vegas’ ownership group. The company is investing about $500,000 in the Vinyl revamp, a modest outlay in the hotel’s $200 million renovation.

Other than the 24 Oxford title, the venue is not looking back. Scott said Raiding the Rock Vault, which most recently performed at Rio’s Club 107, would not return to the space. The rocking music production had performed in Las Vegas for seven years at four hotels before the COVID shutdown.

“We had a terrific run with those guys, and they were a good partner that helped fill the space,” Scott said. “But our approach is, we want to really be fresh and new from all aspects of the hotel, and that includes fresh entertainment.”

Scott all but confirmed the club will be home to comedy rather than a live-music artist or band when the hotel reopens. Clay, Tom Green and Steve-O alternately headlined the room over the years.

“When you look at the restrictions we have, comedy makes more the most sense,” Scott said. “We haven’t really pressed on the gas on what we have planned. It won’t be live music when the hotel reopens, but when the restrictions change, we’re really going to focus on live music.”

“We’re really sort of focused on, how do we return to work and how can we return to work in a healthy and safe way for our employees and for our guests,” Grilly said in a recent phone interview. “Are there standards that we can get behind? Right now, I think we are trying to understand the guidelines that the governor has put out, and we are hopeful to be a resource for the governor and other government agencies as they think about what type of protocols are going to be important.”

It is certain Cirque cannot return its Strip residency shows until the capacity restrictions are relaxed, and no responsible individual can predict exactly when that will be. “For us, the 250-seat limit is a fantastic step of moving in the right direction but that’s not financially viable for us to open under that current situation,” Grilly says.

The group is brainstorming ways to safely and efficiently return live entertainment to Las Vegas stages. If it sounds familiar, it should. Las Vegas Events President Pat Christenson has been holding such meetings with a wide-ranging group of venue operators since April under the Vegas Events COVID-19 Committee (VECC) umbrella. Expect the two groups to merge, philosophically if not in fact, as the brainstorming continues.

Frontier Airlines is planning a Vegas-specific marketing campaign. Look for Westgate Cabaret headlining magician Jen Kramer to be front and center in this one. Frontier is a busy, low-cost carrier that operates many flights out of Vegas and is in direct competition with Allegiant Airlines.

The Space hosted a wonderful artist, the guitarist Pavlo Simtikidis, for a live stream on Thursday night. Using simply his first name onstage, Pavlo has hosted several PBS specials and is planning a return to the Space in December. His show was a refreshing mix of Greek, Spanish and Latin flavors, and his band performed expertly and clearly relished their first live performance since Feb. 19. Nice suits, too, gents.

On the topic of the annex on Polaris Avenue and Cavaretta Court, the new art troupe Ballet 120 hosts an evening of dance with four stage premieres and a pair of dance video premieres. Nevada Ballet Theatre dancers Ben Tucker and Emma McGirr founded the company, which features a group of international dancers and music by Gershwin, Tycho and Vegas local composer Rylan Leo Helmuth. The stream is $20, a mere pittance. Go to thespacelv.com.

Drag and a duo

Ken Henderson is building momentum at Notoriety at Neonopolis, and is now talking of hosting a Fat Tuesday showcase of horn bands, along with jazz nights hosted by Clint Holmes. Anne Martinez’s Red Penny Arcade is now playing Fridays in the Robin Leach Theater (this is the theater easy to identify because of the large painting of Robin near the bar). Henderson is also setting up the former Galaxy Theater lobby space as a live venue with intriguing possibilities, including a drag production and also a pairing of Vin A. of Bronx Wanderers and and Jimmy Denning of Tenors of Rock. That room seats 140-150 and is naturally spaced out.

*Look for the Las Vegas Visitors and Convention Authority and Las Vegas Events to roll with an aggressive, Vegas-flavored marketing blitz promoting the National Finals Rodeo’s return to Las Vegas in 2021. This should happen just as this year’s NFR closes in Arlington, Texas.