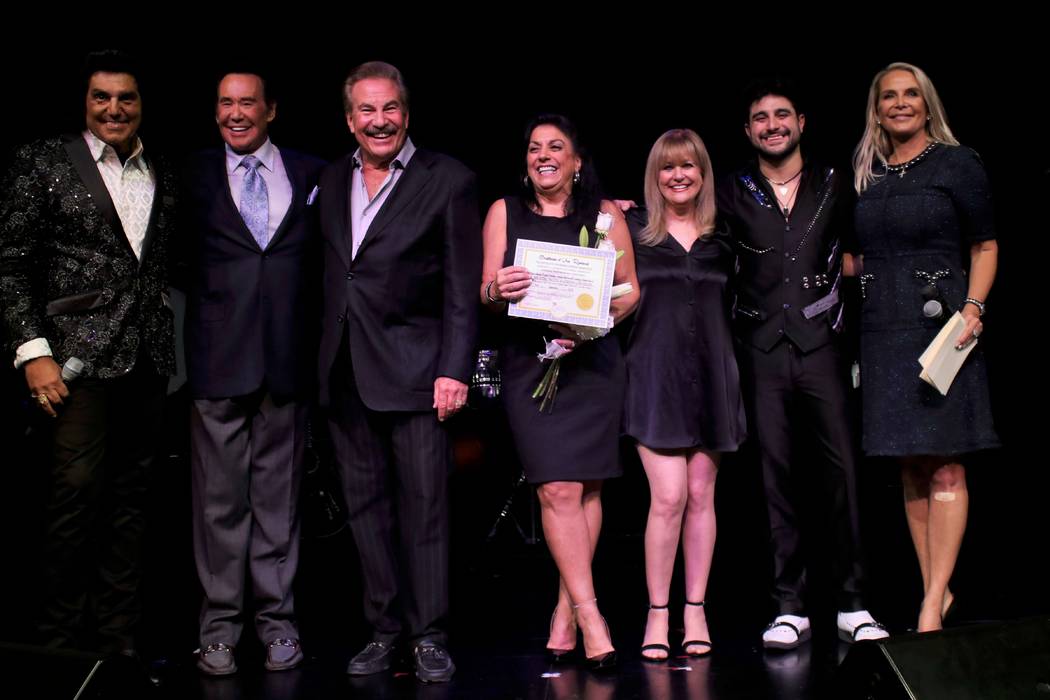 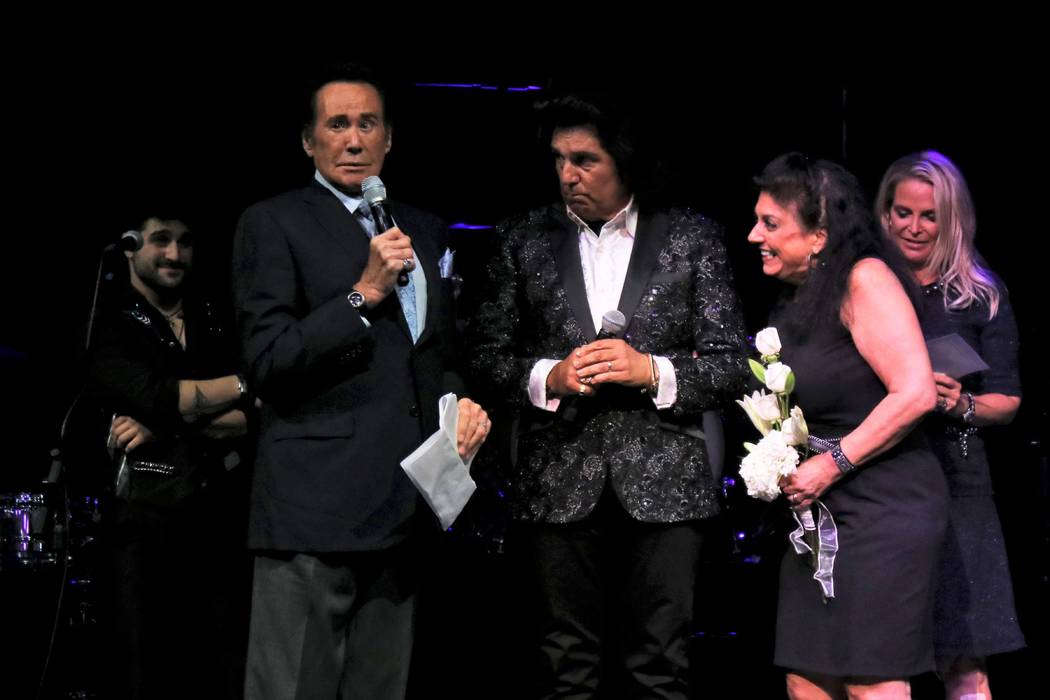 Vinny and Carol Adinolfi renew their vows Thursday with the help of Wayne Newton, left, at Mat Franco Theater at The Linq. (Ira Kuzma) 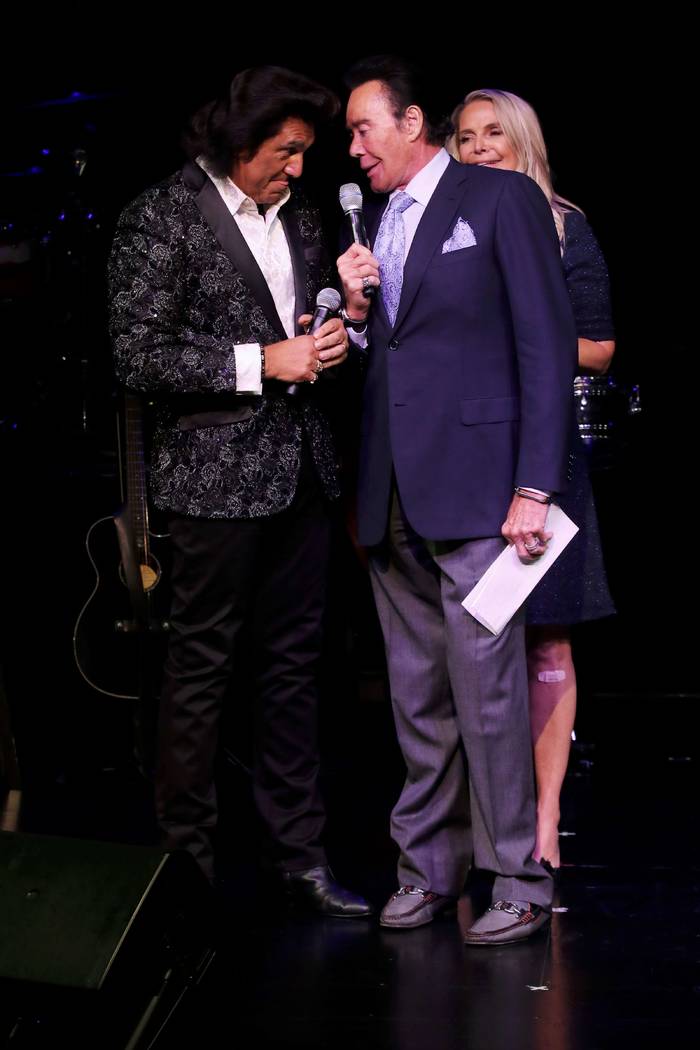 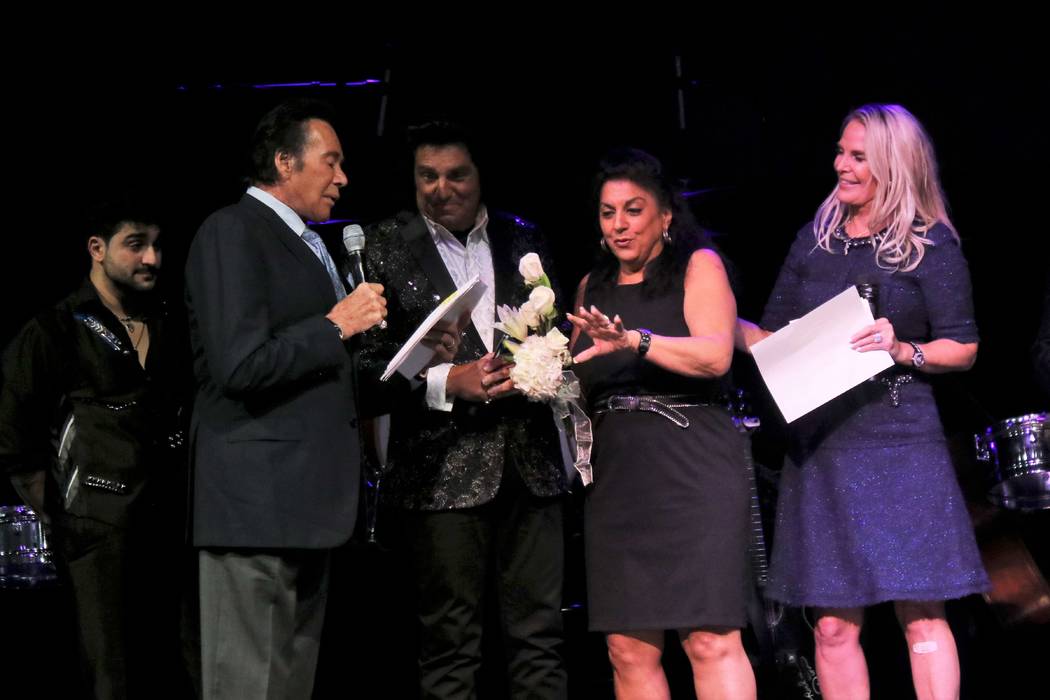 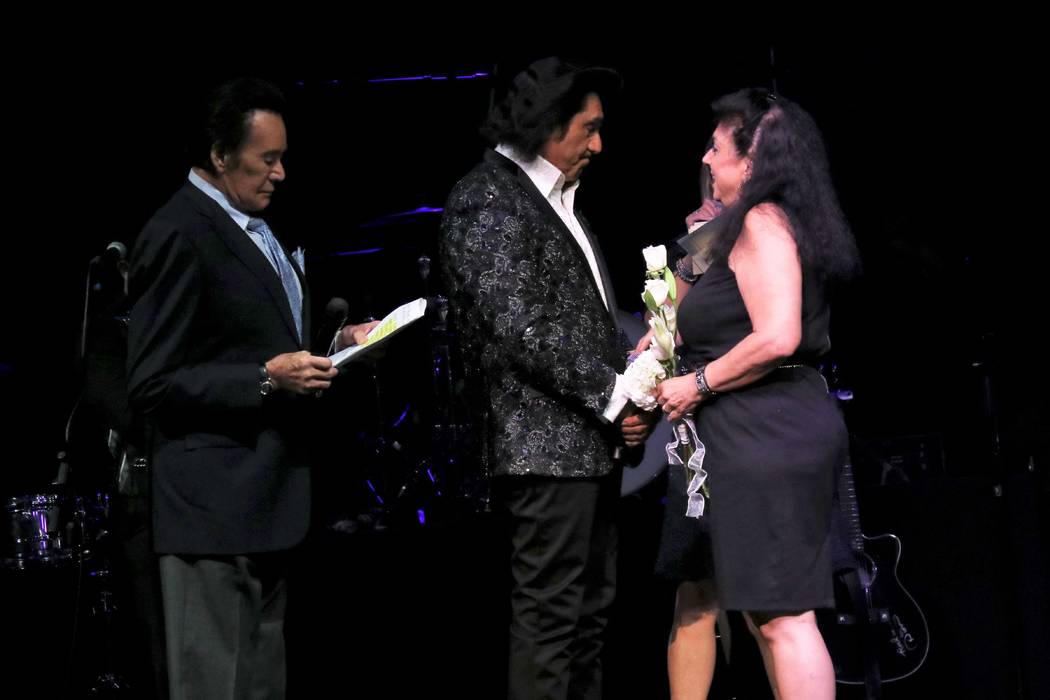 Vinny and Carol Adinolfi renew their vows Thursday with the help of Wayne Newton, left, at Mat Franco Theater at The Linq. (Ira Kuzma)

Vinny Adinolfi plays a game called, “What would Wayne do?” It’s a reference to big decisions, with Wayne Newton in the pivotal role.

As his 36th wedding anniversary approached, Adinolfi wondered how to mark a special moment for his wife, Carol. As Adinolfi, founder of the family rock ‘n’ roll act the Bronx Wanderers, told the crowd at Mat Franco Theater on Monday, “Every time I have to make a decision at home, I ask, ‘What would Wayne do?’”

At that, Newton himself arrived from the wings with a microphone.

“What would Wayne do?” Newton asked as the crowd shouted and applauded. “I think that Wayne would renew his wedding vows.”

Kathleen Newton, Wayne’s wife, also took part in the ceremony, which was certainly unrehearsed (those faltering microphones were one indication). The Adinolfis and Newtons became close when they shared residencies at the former Windows Showroom at Bally’s, which is now The Magic Attic.

Carol had not been told of this plan, which was several days in planning and included an invitation for Vinny’s brother, Richie, to join the band on keyboard. “Carol! You have to come down!” Vinny called toward the back of the theater.

Carol Adinolfi would later say, “Can you believe this? Mr. Las Vegas! But I thought something might have been up when I was walking to the theater and I knew everyone who was lined up for the show!”

The Adinolfis plan to vacation in Maui, where they spent their honeymoon. Vinny is notoriously reluctant to take any nights off — he never missed a performance in two years when the show was at Bally’s. So the couple are due for some down time, some sunshine and a few waves.

“Carol is always telling me I’m not romantic,” Vinny said, grinning. “I think this is pretty romantic.”

Whenever I see Dave Loeb, I’m tempted to say, “Let’s be careful out there.”

That’s because Loeb played the familiar theme to the 1980s drama series “Hill Street Blues,” which opened with Loeb’s performance and also featured the line spoken by Sergeant Phil Esterhaus, played by the late Michael Conrad.

Loeb, a master pianist, leads Jazz Ensemble I. Uli Geissendoerfer, who is a regular performer in Saturday night jazz gigs at the Dispensary Lounge at 2451 E. Tropicana Ave., heads up the Latin Jazz Ensemble segment of the show. The UNLV Jazz Studies Program musicians won three honors this year in the annual DownBeat Magazine Student Music Awards, given out by the country’s largest and most prestigious jazz publication. The program has won 20 such awards since 2010 and is considered by jazz experts as one of the premier programs in the U.S.