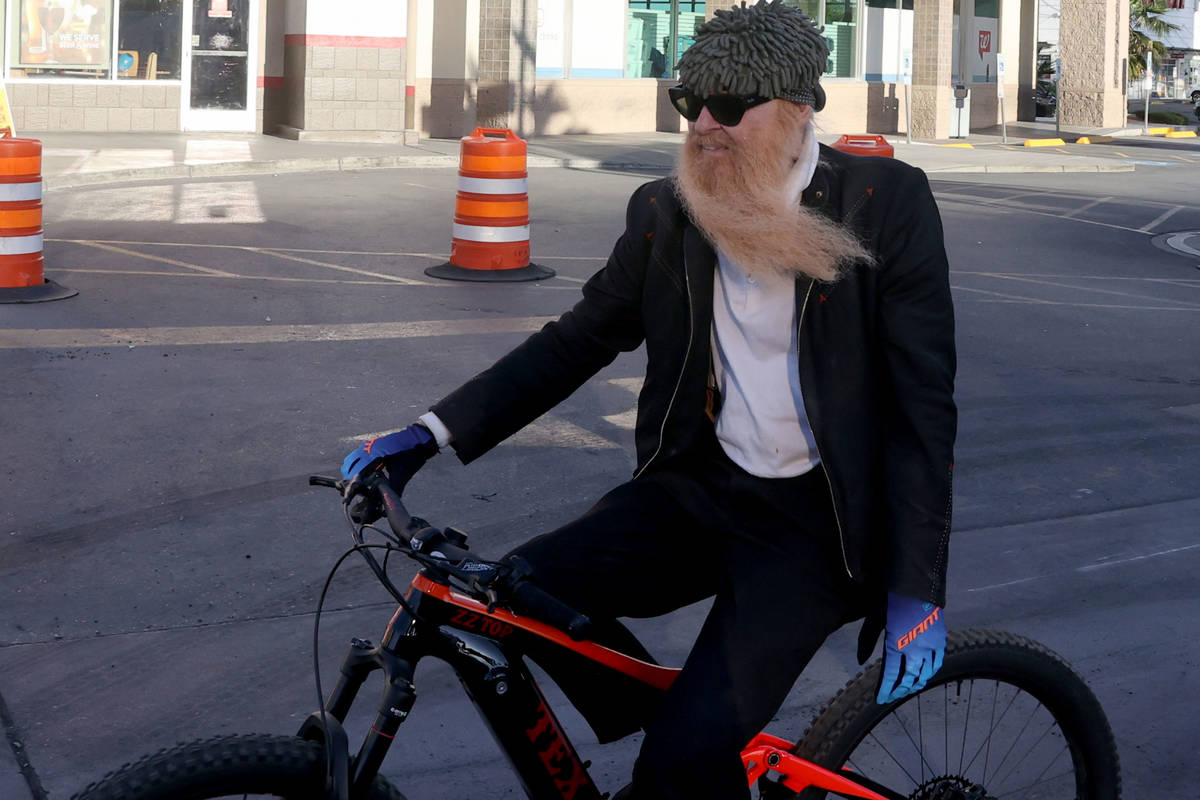 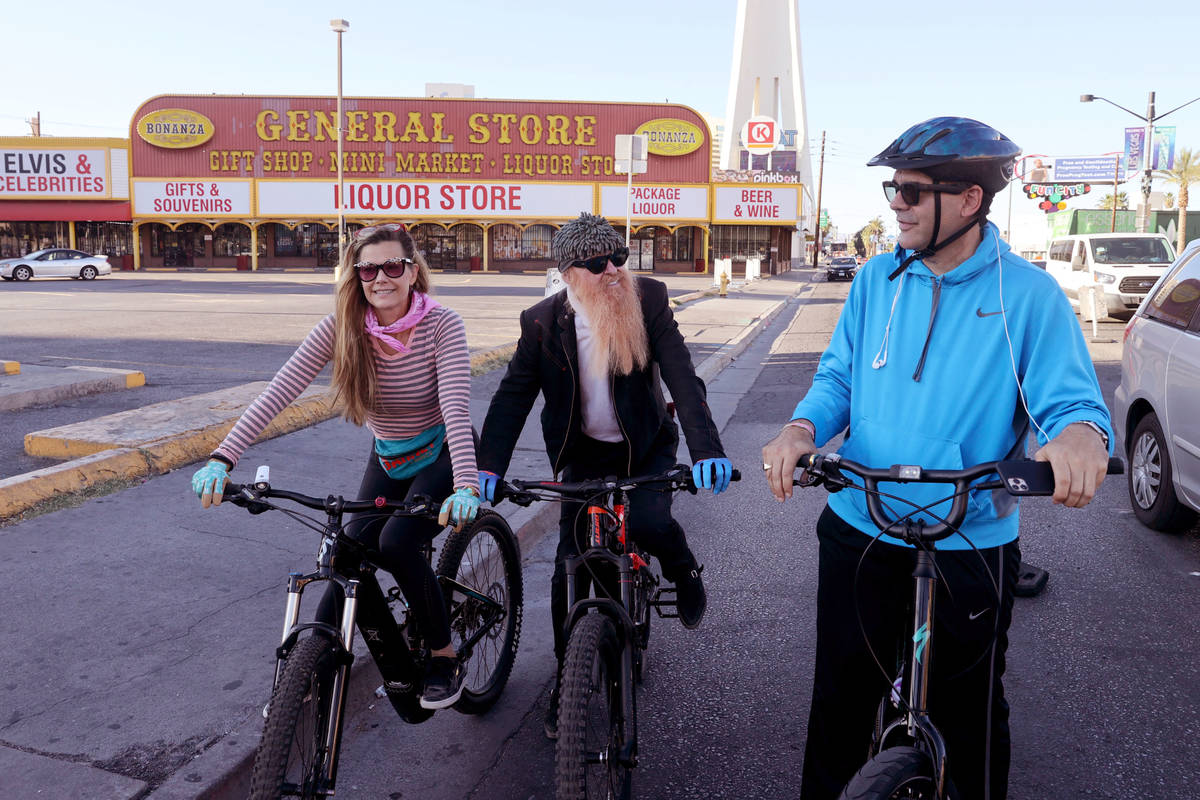 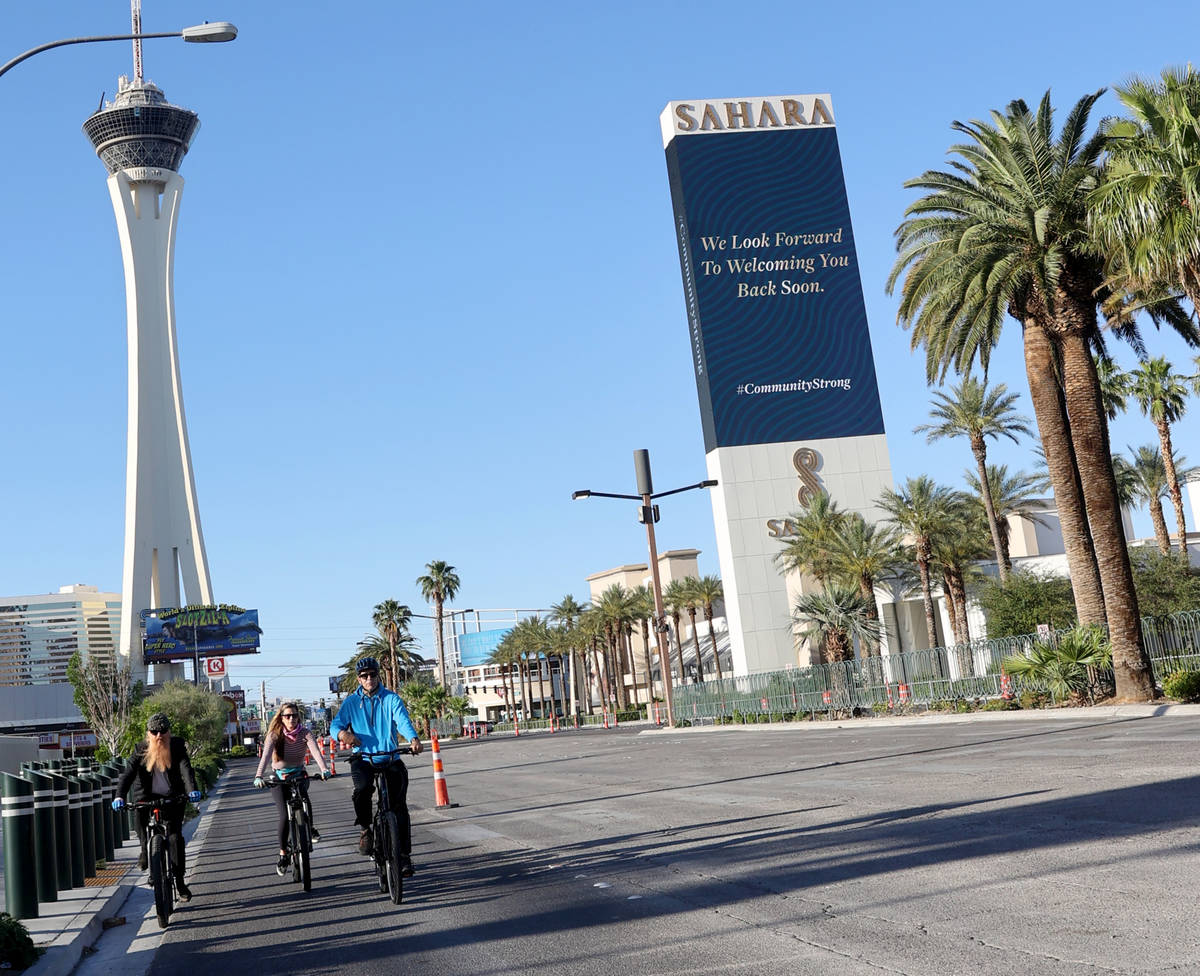 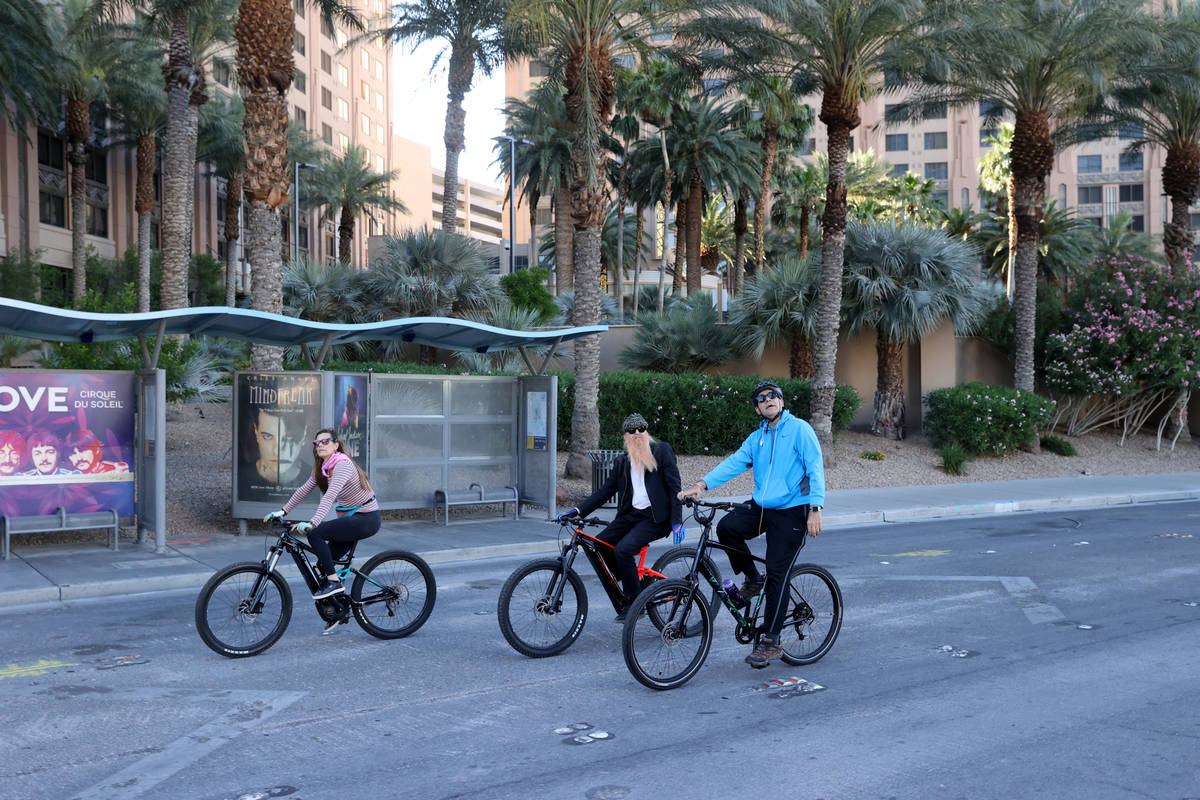 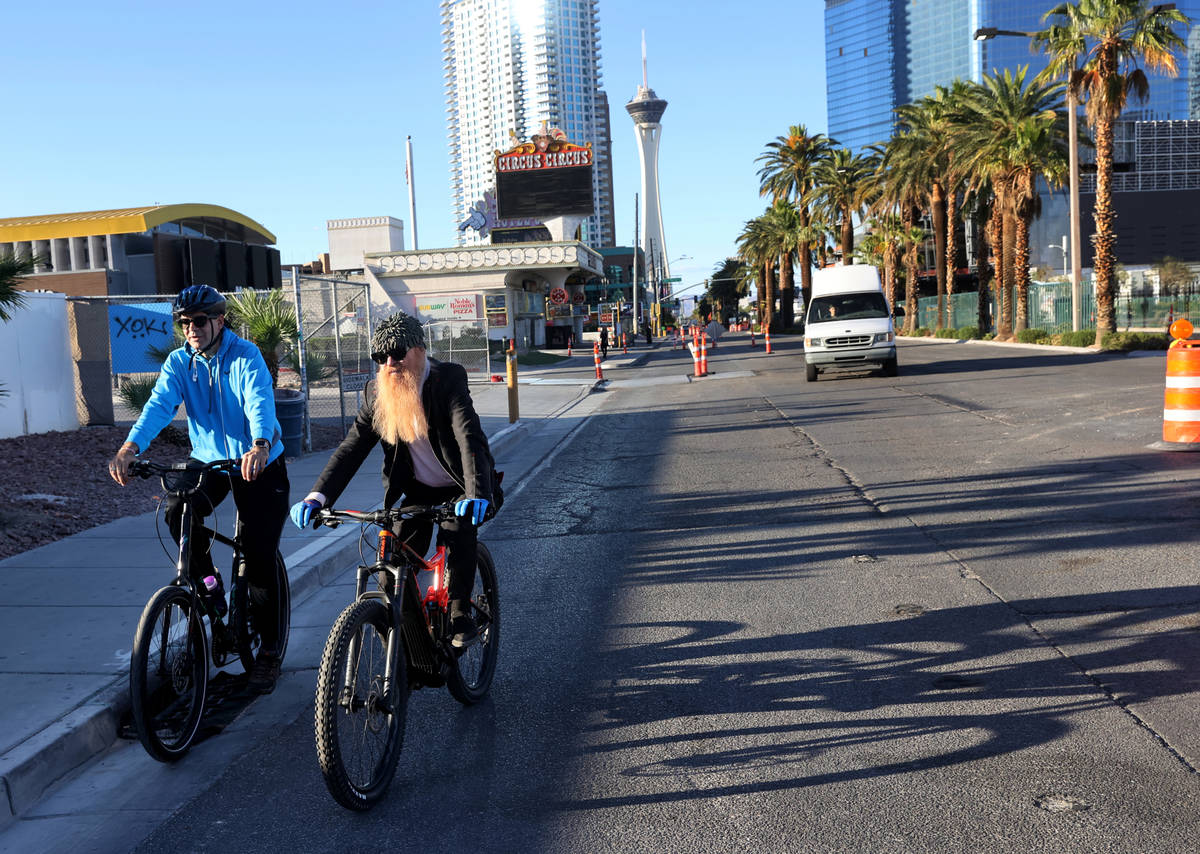 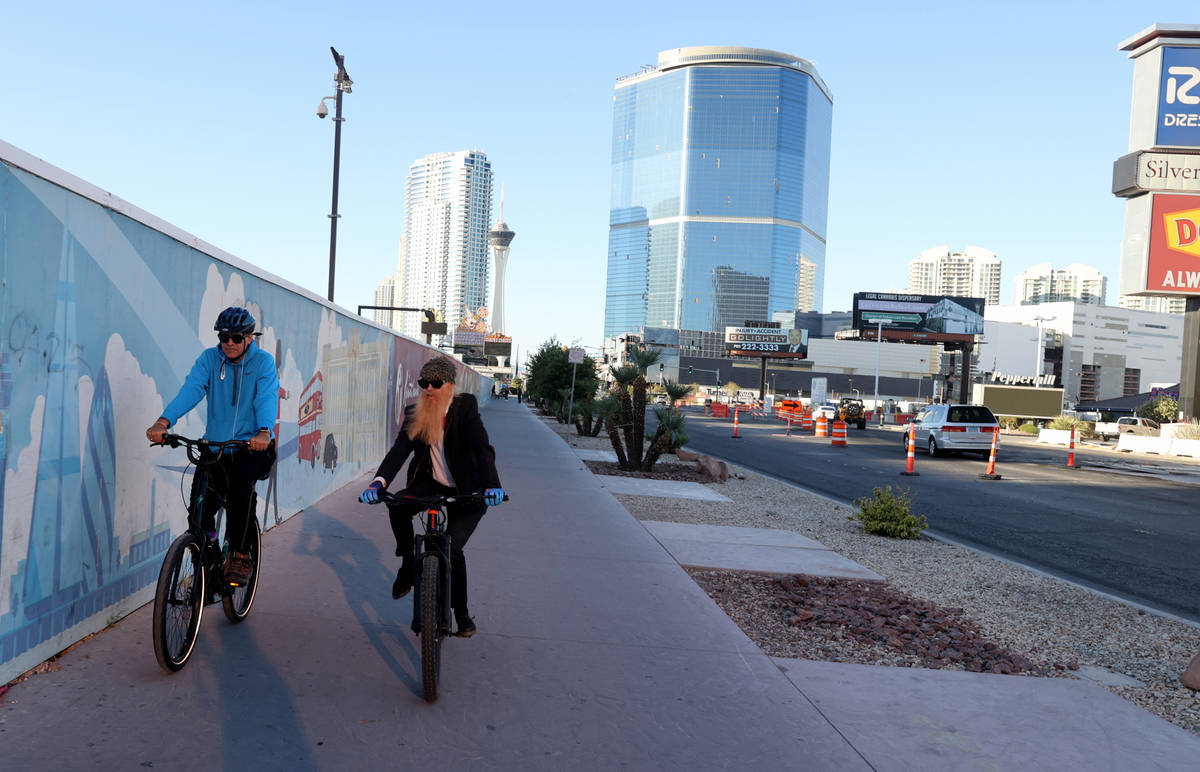 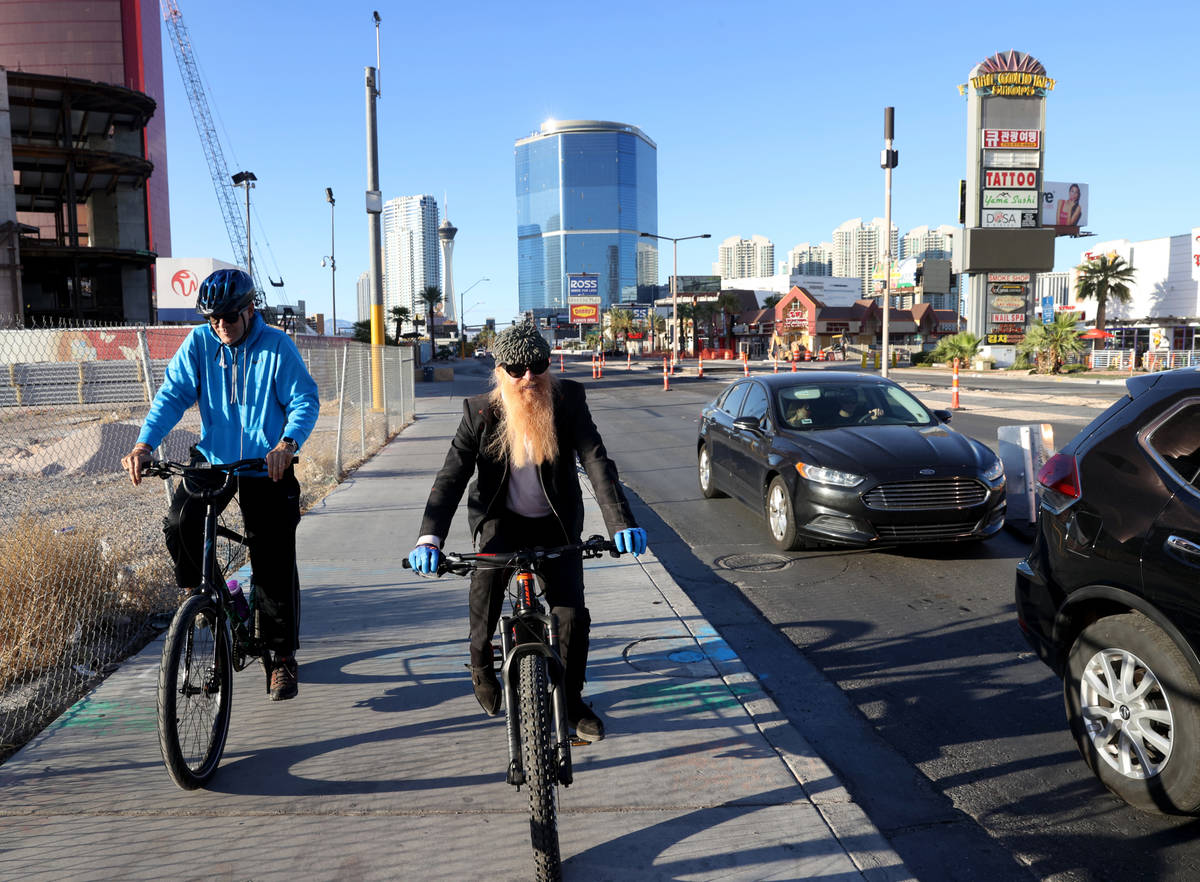 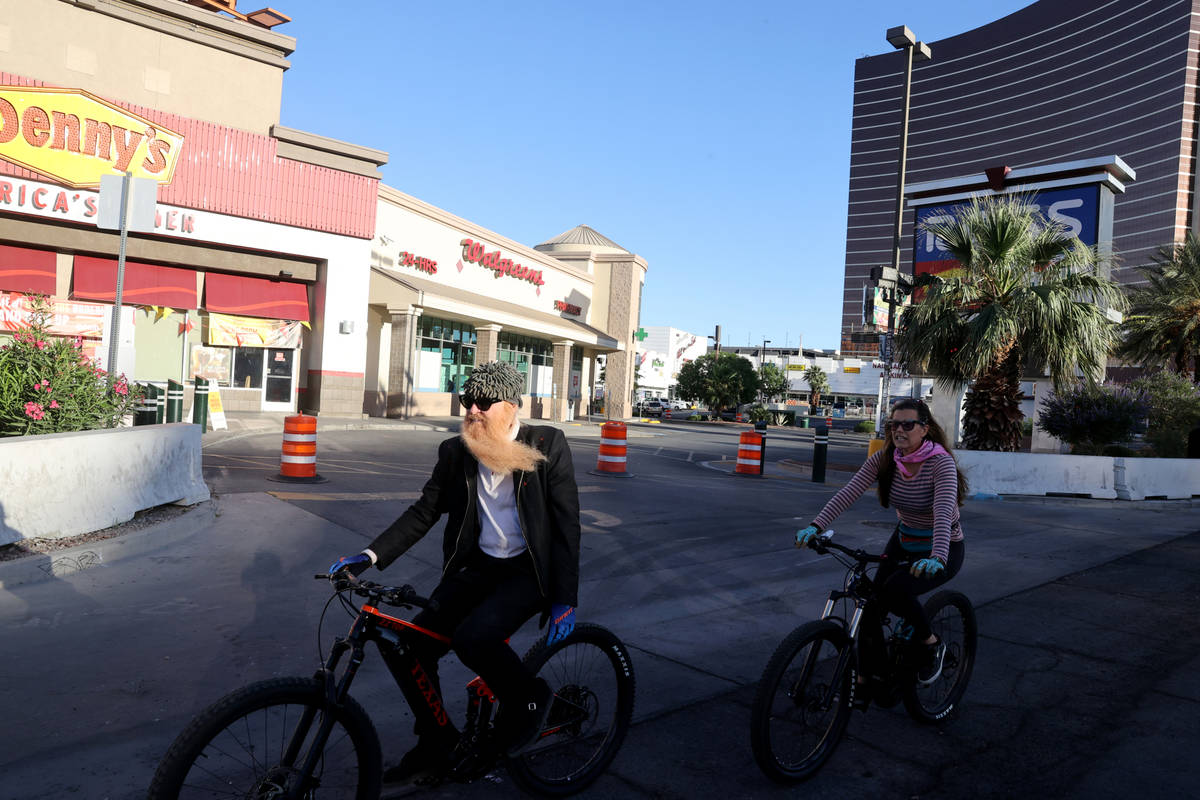 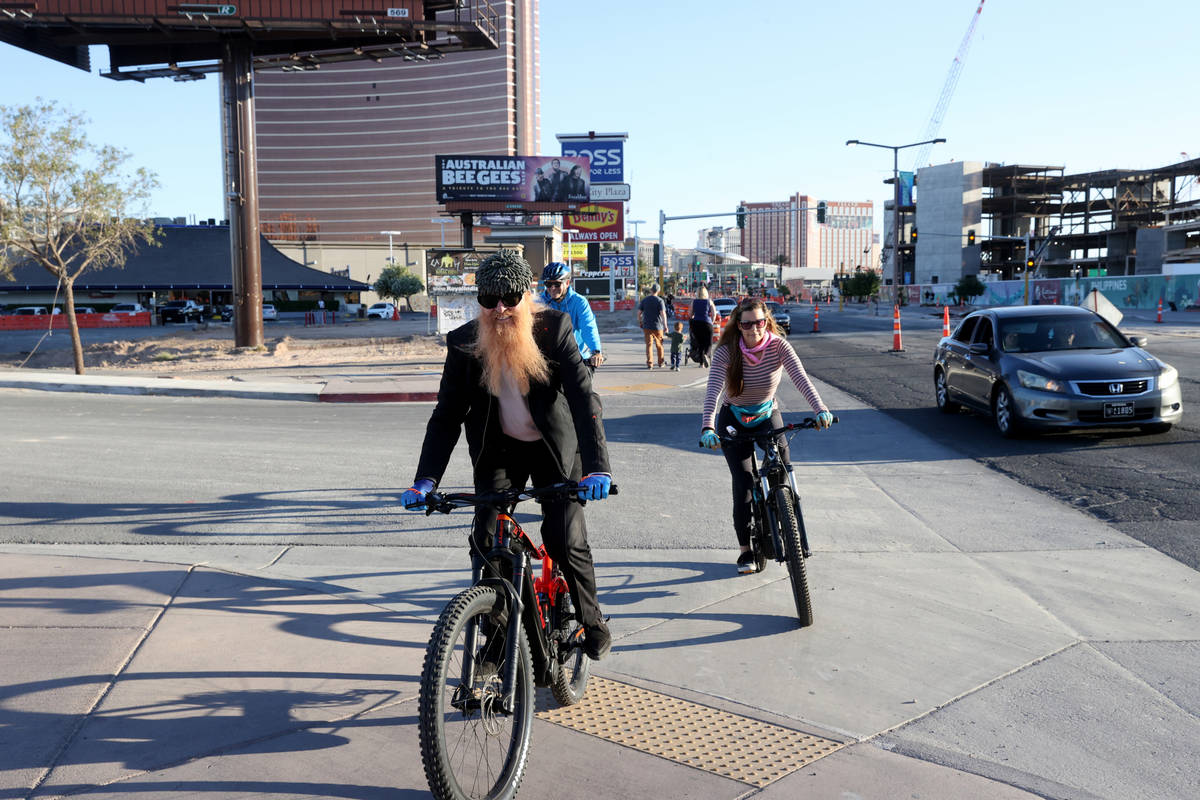 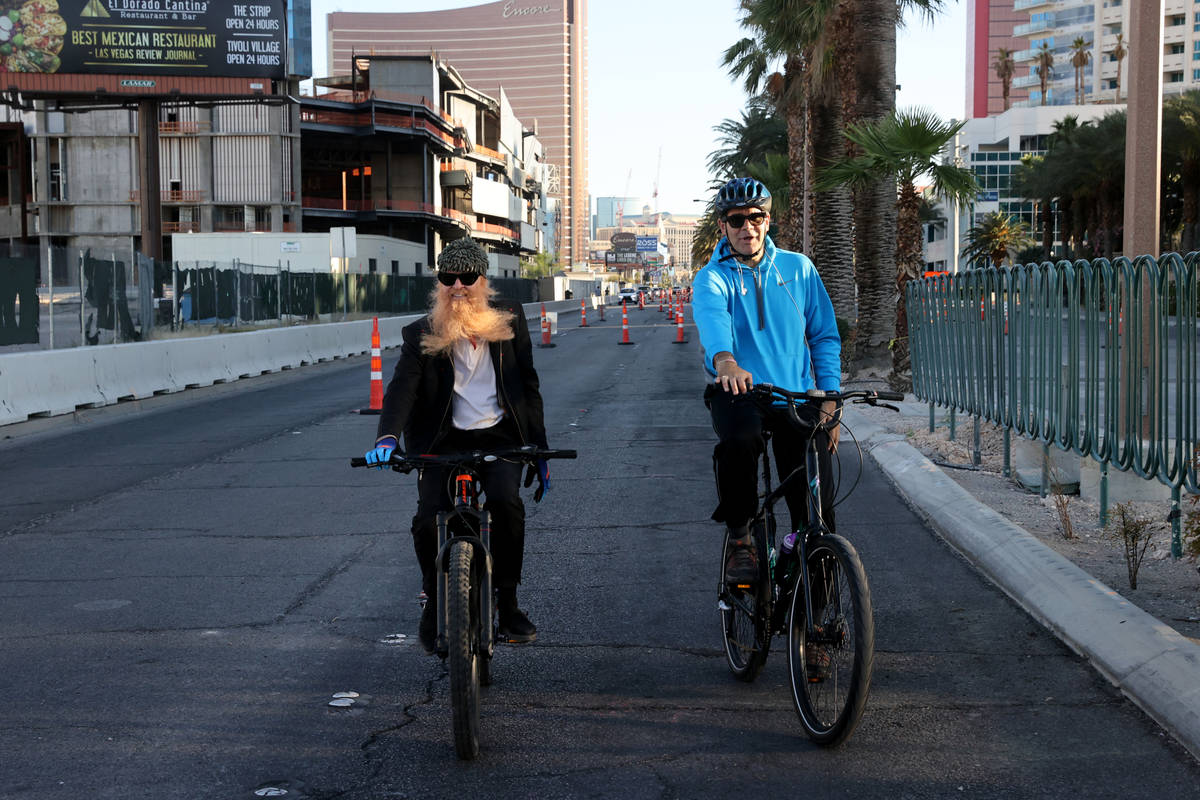 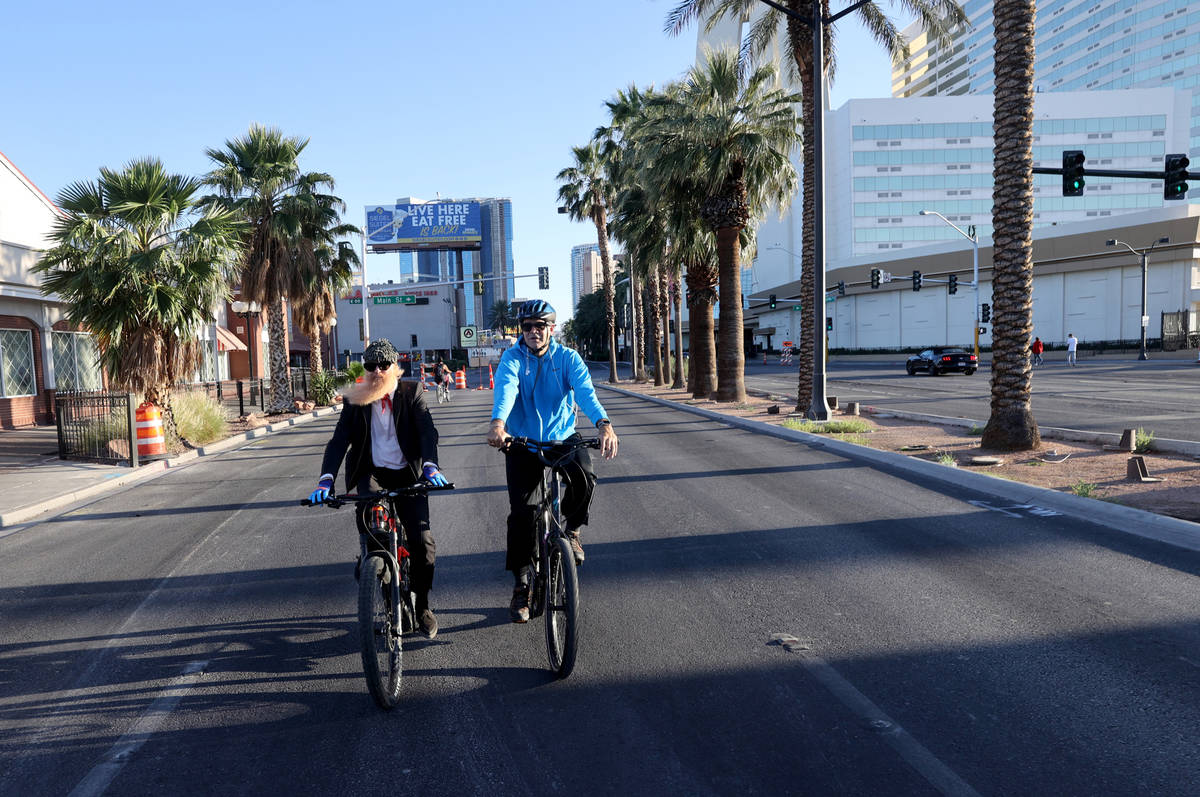 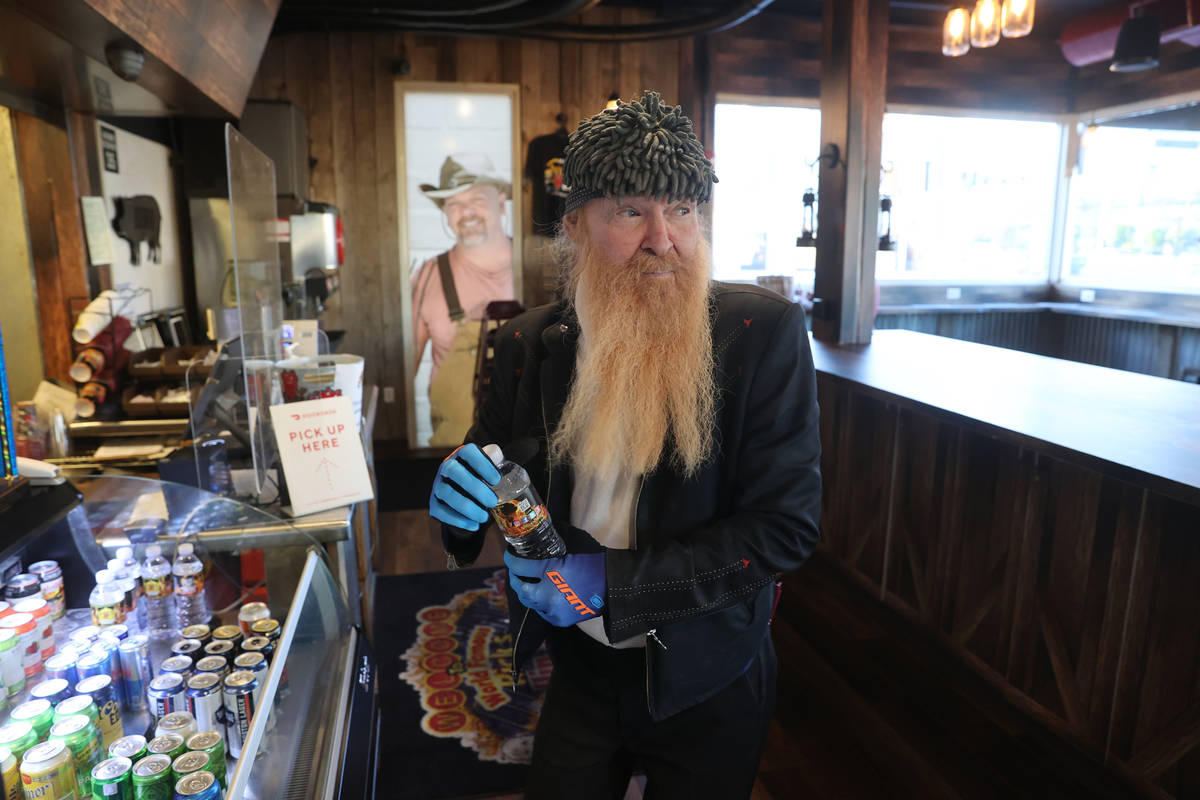 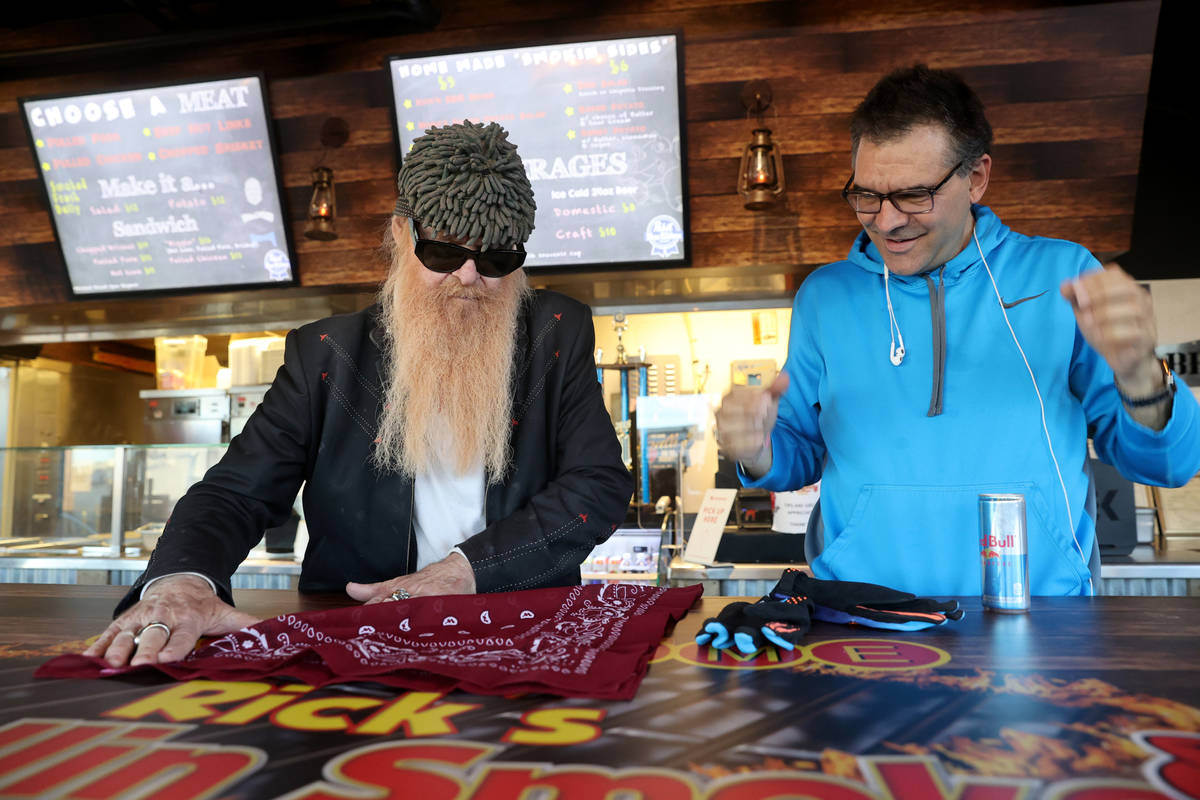 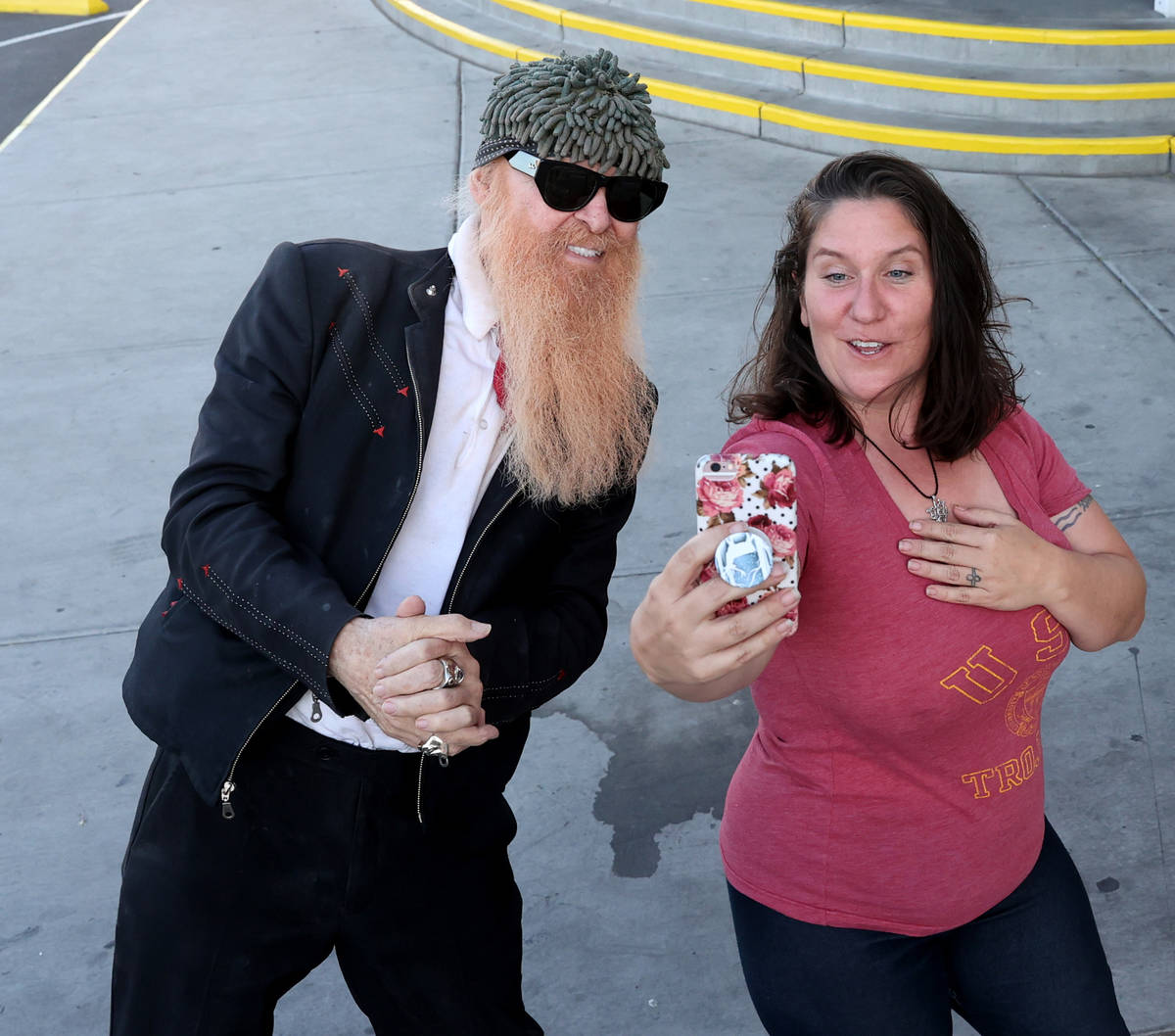 To paraphrase the song: He’s got legs. He knows how to use them.

Gibbons’ is burnt orange with his name and the ZZ Top logo in Western script painted on the frame. A cycle befitting a legend, for sure.

Gibbons has been eager to get out and play two-wheel tourist, so our pedaling trio hit the Las Vegas Strip on Tuesday afternoon and into the evening. I was the third wheel. Gibbons didn’t mind. He’s thrives in a three-person lineup.

We meet at the base of The Strat, with Gibbons and Gilligan biking all the way over from the couple’s home in Rancho Circle. Gibbons beamed behind his famous beard at the opportunity to see the Strip from a bike as opposed to a car. Say, a ’33 Ford Coupe.

“We will not have the chance to do this much longer,” Gibbons says as I meet the legendary guitarist at The Strat. “It’s amazing how much you see when you’re biking, as opposed to driving. I’m glad I’m doing it now.”

Understand that one does not just wake up one day and decide to ride bikes on the Strip with Billy Gibbons. This trip materialized unexpectedly, organically and quickly.

It started Saturday afternoon, as I was at Fashion Show mall waiting to ride with Wayne Newton. That also was a random trip. Mr. Las Vegas himself has taken an interest in bicycling Las Vegas Boulevard as its resorts are in COVID-19 shutdown.

As I waited outside Stripburger, facing Wynn Las Vegas and Encore, it occurred to me to text Gibbons and ask if he had any photos of himself with a face mask. Why I thought to ask him that, at that moment, is inexplicable. Maybe the burger place had played “Sharp Dressed Man” on its loudspeakers and I was subliminally inspired.

A few moments later, Gibbons sent a selfie while wearing his trademark cheap sunglasses, beanie cap and a bandana around his face. I also mentioned that I was about to ride the Strip with Mr. Las Vegas. Gibbons thought that was pretty cool, so afterward we connected again, and decided sometime this week we’d ride the Strip.

I also bought a new bicycle for this adventure — I’d not owned a bike for many years but needed one because of all this sudden bicycle activity. On Tuesday afternoon I hustled to Las Vegas Cycle with my dear friend, RJ photog and bicycling devotee Kevin Cannon, who would shoot this assignment.

The one bike that fit all needs was a Specialized hybrid, which was perfect aside from the fact its paint design is black with neon-green marijuana plants. Yes, it’s a potted cycle. This ride also came with a number plate: 420 (I won’t bother explaining that number’s significance), but regardless, I decided to roll with this CBD-inspired bike.

“That bike, you did the right thing, man,” Gibbons said after his inspection. “It’s awesome, and it’s legal.”

We take off from The Strat on Bob Stupak Avenue, cruising southbound past Sahara Avenue. But our original plan to ride all the way to Tropicana/Excalibur was cut short. Gibbons was eager to swing back to Pawn Plaza at Gold & Silver Pawn, which is on Las Vegas Boulevard a little north of Charleston Boulevard.

Occasionally, motorists and our fellow bikers shout, “ZZ Top!” Folks often refer to Gibbons, his beard waving in the breeze, by the band’s name rather than his own.

At ground level, Gibbons asks about many Strip construction projects in development, pointing toward the latent Las Vegas Festival Grounds and Frontier sites. “What I loved about Las Vegas is it was a real Wild West town,” says the native of Houston. He recalls some old favorites, such the razed Stardust on the imposing Resorts World Las Vegas site, El Rancho Vegas, Frontier and Riviera.

Gibbons is interested in the giant blue effigy on the north side of the Strip — The Drew — and where the Riviera once stood. I mentioned we should have a late-night dinner at the recently reopened Peppermill, as he’d fit in perfectly at the classic-Vegas restaurant.

Gibbons points at the impressive Las Vegas Convention Center on the east side of the Strip, then turns to his right and says of the McDonald’s just north of Circus Circus, “Hey, there’s that McD’s you were telling me about!” He remembers his first trip to Vegas, when his family stayed at the Tropicana soon after it opened in 1957.

“I got to go to the pool!” he recalls. “I was thrilled. They had those great fountains. I thought the place was amazing.”

We wheel around at Fashion Show Drive and pedal all the way back to Rick’s Rollin’ Smoke Barbecue & Tavern at Pawn Plaza. Gibbons is friends with proprietor and “Pawn Stars” creator Rick Harrison and will be featured on an upcoming episode.

Gibbons grabs the group waters (no FizzyWater at this place) and a Red Bull and poses for photos. It’s left to his bicycling partner to answer such questions as, “Is he really ZZ Top?” He’s patient with several customers who luck into this brush with greatness, as Gilligan repeatedly reminds him, “Billy, practice social distancing!” It’s not easy for Gibbons, who is friendly to a fault.

Gibbons tells me he is heading off Sunday to Palm Springs for a few days to record a new album. He’s not at all sure when the ZZ Top residency scheduled for May at The Venetian might return. “I know very little, but we will be ready,” he said. The band’s 50th anniversary is this year.

As we closed the trip, Gibbons pulled out a red handkerchief, folded it and tied it around my neck, saying, “This is if you need a bandana for our next ride.”

That bandana is the same style as the one Gibbons wore around his face in his selfie. Fittingly, this biker gang has come full circle.