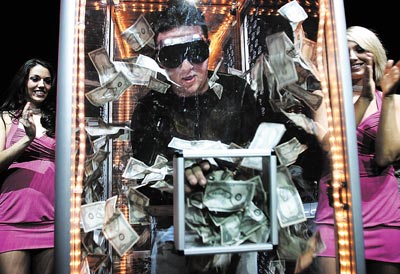 Game shows on the Strip are a lot like news on the Internet: a match made in heaven, until you try to get someone to pay.

But in 2006, "The Price Is Right — Live" at Bally’s overcame skepticism that people would shell out nearly $50 for a live version of the TV institution. "Price" now seems poised to move into a prime-time slot at the Imperial Palace, replacing "Legends in Concert."

That success is balanced by "The $250,000 Ultimate Game Show," which didn’t linger last year even with hosts such as Chuck Woolery. And the jury is still out on "The Real Deal," a recent Venetian arrival that puts a game show patina on poker, letting you play along with big-name pros.

Now comes a test of whether pure greed can sell a game format without a name host or the virtual Americana status of "Price."

"$1,000,000 Vegas Game Show" makes up its own low-tech games, and host Rene Ruiz is familiar only to those who saw him in the same theater as frontman of the a capella troupe Toxic Audio. That leaves one thing — the chance to win stuff — as the draw of this creation by Jeff Gitlin, co-producer of "Tony ‘n’ Tina’s Wedding," which plays afternoons at the V Theater.

But greed was good enough at this show. Audience members knew just how to wave their arms and yell "Show me the money!" when Ruiz prompted, "We need to create a real game show atmosphere out there!"

Ruiz and two leggy assistants look right at home on the set for "V — The Ultimate Variety Show" by TV designer Andy Walmsley. But the games themselves turn out to be far less flashy.

"Lucky Dollar" has three contestants choosing from 12 cards on a display stand: Turning up any of three bad cards will send you back to the audience; the other nine list specific dollar amounts.

Julie from Wyoming amassed a whopping $20 and tried to double it with a spin of a giant wheel. Alas, she landed on a number that cut her win in half.

Later, the display board is trotted out for another, almost identical game, except contestants are trying to match up colored dollar signs. The winner gets to play "Vegas Dream," which is … another easel-type board, where you try to match five symbols to those previously placed and hidden.

The contests are way more "game" than "show." There’s nothing as visual as Cliffhanger, Hole In One or Plinko. But the crowd had fun doing Elvis imitations for one another and watching three blindfolded guys grab for blowing play dough in one of those "money shower" booths. The ultimate winner of that contest also chose to spin the wheel, and also got his stake of $35 cut in half.

The biggest winner of the day was a guy named Bob from Vancouver, B.C., who won an iPod by rolling oversized dice. Another major prize, not claimed this day, was tickets to "Tony ‘n’ Tina’s Wedding." As noted above, those don’t set the producer back a whole lot.

By the time the million-dollar title game rolls around, most of the audience should have figured out that, a) It will be impossible to win and, b) It’s another board with reveal cards. This time, you hope your five picks add up to $1 million.

Gitlin says he has seen several people get four of the five correct numbers to win the million, and that he gave away five Caribbean cruises in the first 13 shows. He says he is rooting for someone to win the big prize because of the publicity value, though that opinion is not shared by his insurer.

No one this day was quite so lucky. "Game Show" might take root as a reward for sitting through time-share pitches, or if Gitlin could perhaps lower the ticket price through imbedded commercials, as the TV games do. But anyone who actually paid $43.49 might wish they had opted for the trained cat show that follows in the theater. Like they say in the casino next door: You pays your money, you takes your chances.