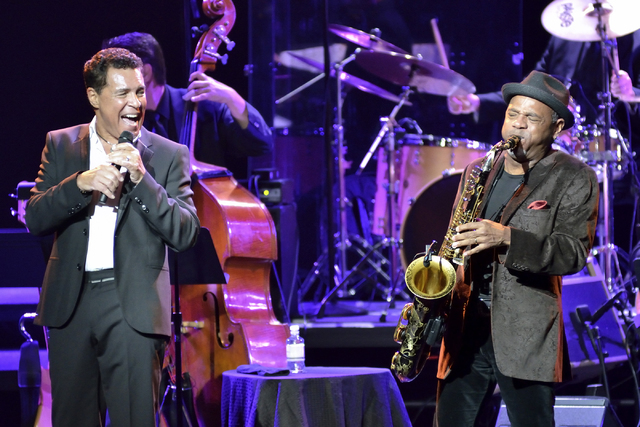 Clint Holmes, left, is returning to the Strip with a new show called “Between the Lines” debuting in the Palazzo on July 16. (Bill Hughes/Las Vegas Review-Journal) 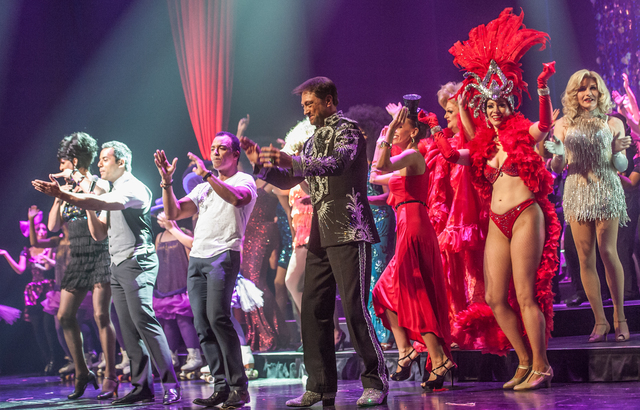 Entertainers perform at the 2013 "Ribbon of Life" event in at The Smith Center for the Performing Arts. (Courtesy)

Ron DeCar was backstage at the Tropicana for the first time in 18 years, remembering days and people gone by.

“It was just strange to see Larry Lee’s office and the dressing rooms,” he says of the Tropicana entertainment director during the years DeCar was a “Folies Bergere” singer.

“I can see all of the dancers there and three or four of them have passed away now along with Larry,” he says. “It’s old home week for me, going back to see a place I lived at for 14 years.”

DeCar and Kathy Shriner are the only people from the very first “Ribbon of Life” benefit for Golden Rainbow who are back for the 30th one Sunday. And it happens to be held at the Tropicana, where DeCar was a dancer for “Folies Bergere” in 1987.

By odd coincidence, the “Folies” resurfaces in two places this weekend. The Nevada State Museum just opened a new exhibit of “Folies” costumes and photographs. But that one will be around until mid-January.

More pressing is the 1 p.m. fundraiser Sunday at the Tropicana. (Tickets are $50 to $200; see troplv.com/ribbonoflife for details). The 30 years become more symbolic when you think about how both the cause and the show itself have changed.

Golden Rainbow is still a nonprofit devoted to housing and financial assistance for those with AIDS and HIV. But the demographic of those affected years ago shifted beyond the gay men originally infected in the show community.

The first benefit came after a “Jubilee” dancer named Chris Carter developed AIDS and was sent off to die in his family’s garage in Los Angeles. “At that time nobody knew anything about what was going on with the disease,” DeCar says.

Family members were “afraid they were going to catch it. They didn’t want to disown him, but at the same time didn’t want him in the house either.”

This was an era of confusion and suspicion. Liberace’s death in February 1987 was treated as a tabloid scandal. Nevada historian Dennis McBride says “Jubilee” had to bring in Dr. Jerry Cade, to explain to the cast how AIDS was and wasn’t transmitted, and that you couldn’t get it from sweat on a stage.

Two of Carter’s friends, Bree Burgess and Peter Todd, launched the Golden Rainbow benefit to make sure other Las Vegas entertainers didn’t meet the same end as Carter. And DeCar says that by 1991, two “Folies” cast members had died.

“It just eviscerated the entertainment here,” says McBride, whose history book, “Out of the Neon Closet: Queer Community in the Silver State,” awaits publication.

If that was the motivation, the shows themselves ended up as something more joyous: A chance to stage numbers from “West Side Story” and “Oklahoma,” and reveal skills not displayed in the feather shows.

“Each year it got better,” says DeCar, who was in 23 of the 30 benefits before starting the weddings and special events center that now carries his name. A dozen production shows made it easy for each cast to organize its own contribution. “It became a rivalry thing between the shows to outdo each other, which then only made the Golden Rainbow show that much better.”

“As a matter of fact,” says Shriner, “I think Steve Wynn got the idea for his ‘Showstoppers’ from Golden Rainbow. One year it was even called ‘Showstoppers.’”

But now, says veteran director Chris Coaley, “only a couple of shows even have dancers.” Golden Rainbow now has individual directors and choreographers assemble talent from wherever they need to find it.

“We had to change,” Coaley says. But the change, he adds, brings the chance to do more original pieces with more dramatic emotional content.

But on Sunday, one last look back. Shriner and Diana Saunders-Bellomo plan to re-create the “Gypsy” song “You Gotta Have a Gimmick” they first did in 1989.

“It’s not the community that we used to have. It’s kind of sad,” Shriner says. “I felt that when I was going to rehearsal. I hadn’t performed in a long time but still you don’t know many people. It’s not a community of performers anymore where everybody knew each other. That’s gone. It’s not that close-knit feeling anymore.” …

Chalk it up to the growth of the “locals” market or Clint Holmes’ longevity as a Las Vegan. But some of us had quit worrying about whether he would ever make it back to the Strip.

After a six-year run at Harrah’s Las Vegas ended in 2006, the versatile entertainer made his name on the New York cabaret scene. And he seemed to have found an ideal situation as the anchor act of Cabaret Jazz, with a monthly berth at The Smith Center for the Performing Arts.

But Holmes is returning to the Strip, with a new show called “Between the Lines” debuting in the Palazzo on July 16. It will run at 10 p.m. as the roommate production of “Baz — Star Crossed Love,” which is set to open June 25.

Holmes doesn’t need to be reminded of the iffiness of casino showrooms. He was part of “Georgia On My Mind,” a Ray Charles tribute at the adjacent Venetian that closed two weeks shy of a scheduled six-week run last fall.

But this one, he says, is “as good a situation as I could hope for. The hotel is completely behind it.” Ken Henderson of the Best Agency will produce, but the venture is not being treated as a rent-paying tenant. “When I was at Harrah’s, if the hotel had not given us time, we would have never found an audience. That’s what this is,” Holmes says.

The show will be about “how music affects us from day one in just about everything we do.” The Palazzo show will be more nailed down than at Cabaret Jazz, which changed themes every month and forced the singer to constantly learn new songs. In the new venture, three or four originals that tell Holmes’ story will be mixed in with covers by everyone from Stevie Wonder to Ed Sheeran.

This weekend’s “Nat Meets Mel” pairing of Holmes and jazz-standards pianist Billy Stritch will be Holmes’ last Cabaret Jazz date for the forseeable future. The Smith Center’s director, Myron Martin, is “first a friend. He’s excited for me,” Holmes says.

“We love Clint and we’ve been rooting for him to get another big gig on the Strip,” Martin confirms. But Martin says the vacant dates in the calendar are easily filled with national bookings.

“It took us a good year to kind of figure (the programming) out, but it’s working beautifully now,” Martin says of booking the venue almost a year out. “The good news is we have this backlog of talent we’ve been trying to bring to Las Vegas, and the Clint dates will help find a space for them.” …

Back to the Palazzo and Holmes’ roommate “Baz.” It’s a mash-up of “Romeo and Juliet,” “The Great Gatsby” and Baz Luhrmann’s “Moulin Rouge,” and as such, one that might have a lot of you going, “Downer classics? On the Strip? Good luck with that.”

But here’s what you don’t know: The troupe behind the show, For the Record, has announced a deal with ABC and Dick Clark Productions to develop For the Record Live productions for the network, feeding the audience discovered for live TV productions such as “The Sound of Music” and “Grease.”

The announcement didn’t say specifically that “Baz” will be one of the TV productions, but the association sure can’t hurt.

The Review-Journal is owned by the family of Sheldon Adelson, chairman and CEO of Las Vegas Sands Corp., which operates The Venetian and Palazzo.