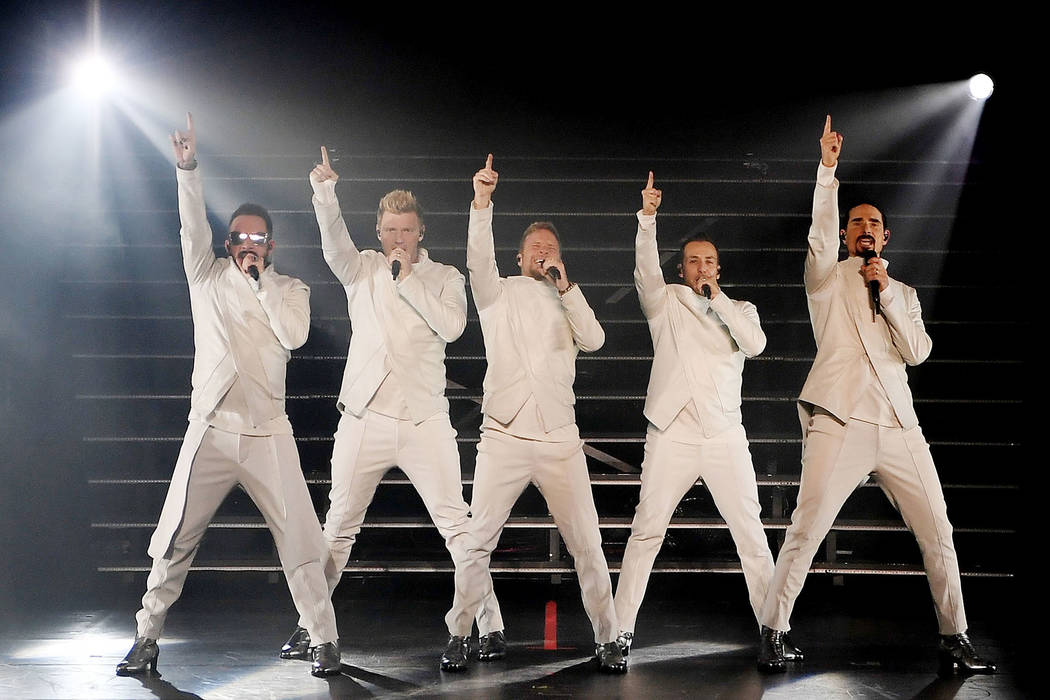 They sing. They dance. And oh, how they point.

The fingers go out right in the middle of “I’ll Never Break Your Heart.” Even if the Backstreet Boys are stationed at the top of a staircase, the finger carries like a laser beam when they sing, “I’d rather die than live without you.”

If you didn’t actually hear grown women ask, “Who? Me? Did he point right at me?” then you heard it in their screams.

But the Backstreet Boys know who got them to Planet Hollywood Resort for a new residency. It’s just a coincidence that “back” is embedded in the name, but no one is really there to look forward.

So “Larger Than Life” is staged like an arena concert. The quintet gets its cardio time on streamlined bleacher stairs filling much of the Planet Hollywood stage, just as 30-something fans remember from their tween years.

They don’t coast down on surfboards like they did in ’99. But they do descend to the stage on five giant cubes — one each for Nick Carter, Howie Dorough, Brian Littrell, A.J. McLean and Kevin Richardson — which stick around as scenic elements and video surfaces.

The Boys carry themselves as men now and can throw out jokes that might have gotten them locked up in 1999: “How many ladies got a hall pass to come spend the night with the Backstreet Boys?” Carter asks, after McLean polls the troops to ask who is “pretty well drunk already? Well, if you’re not, get going.”

Beyond these grown-up jokes, the new show doesn’t try to fix what was never broken: dancing in lockstep to tightly harmonized pop songs, with no Boy hogging the lead vocals for too much of a song.

The question with recurring Las Vegas showcases is always this: Should anyone care now who didn’t care then?

Jennifer Lopez and Pitbull expand the margins of their audience at the same Axis Theater. Backstreet falls more on the Britney Spears side of the fans-only line. But like her, they already have enough fans to fill the place, and they only need to make them happy.

There are no musicians on stage, and even though it sounds pretty “live” for a tracked show, the evening still has the rigid, hit-the-mark quality of the lads in their teen years. The show becomes a ritual almost, with plenty of old photos and videos to cover the change from the white suits to the sparkle jackets.

There are changes, but they don’t beat you over the head with them. A techno-flavored pulse matches the laser intro to “Shape of My Heart.” The Boys themselves pair off with the female half of the 10 dancers for a grown-up ballroom twirl to “Darlin’,” way back from their 1997 debut album.

Then an orchestral interlude leads to an exotic, almost Middle Eastern vibe on “Back to Your Heart,” which lets the lads get their freak on, like a boy-band version of “Kashmir.”

That one energized Littrell to sing another burst of the song even after it ended and to proclaim, “Can you believe we made it? … Is it OK if we have another 24 (years), please?”

No argument from the ticket buyers. And even if it’s only the very end, “Everybody (Backstreet’s Back),” that lets them break loose with the dancers, finally free of geometric formation, there’s reason to celebrate. The show they’ve finished may not power them through the next 24 years, but it’s more than enough for this one.