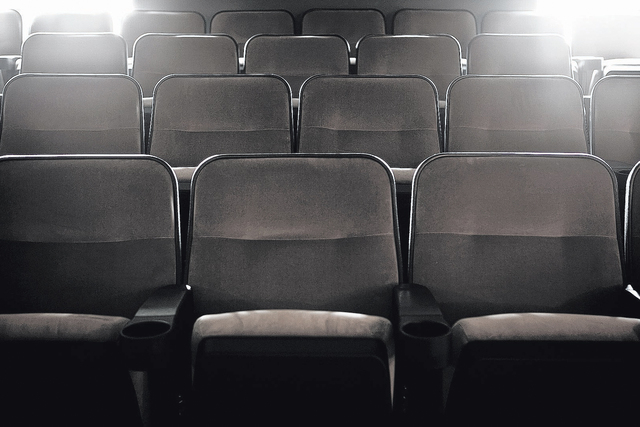 One of my main questions heading into the bizarre “Puppetry of the Penis”: Who else is going to be at this thing?

The answer turned out to be boring. The crowd was the same as it is at a lot of shows I review: My neighbors.

Well, not from my street, per se, but Las Vegas-area locals. From eavesdropped chatter, the dress code and even the less deductive process of the performers asking us where we are from, I realized much of this small audience was generated by the three “seat filler” companies in town.

It proved that some people will indeed watch anything if it’s free, including two nude dudes twisting their junk into comic shapes.

If you are new to town but have a Nevada ID, there are three companies — two with paid memberships, one free — that offer free tickets to locals, usually for new or lower-tier shows. Each day, you log in or get an email blast to see which shows are available. You sign up, show up and all you pay then is a box-office fee.

If you understand the offers are usually going to be “Hitzville” or “The Australian Bee Gees Show,” not Mariah Carey, you’ve discovered one of the perks of being a Las Vegas local.

If “Penis” was kind of extreme as shows go, the experience of seeing it surrounded by seat-filler folk was not.

The no-membership site, ShowTickets4Locals, claims it was little ol’ me who inspired the website that now has 19,000 people grabbing about 725 tickets for 15 or so shows each night.

If you find “The Story of ShowTickets4Locals” on its Facebook page, Gerry McCambridge, aka “The Mentalist,” says he helped a fellow entertainer fill up the room on a night I was coming in to review a show by emailing everyone on his contact list to “paper” the room. The idea led to a website, and you’re welcome.

In the same time frame, Houseseats.com offered similar services for an annual fee, currently $89 for two people. In 2009, it was joined by Fillaseat.com, with the same $89 fee. It now offers tickets to 30 or 35 titles each week.

The “Penis” excursion made me wonder if, with three players on the scene, the seat-filling thing had led to unintended consequences, the way mass discounting led to inflation of face values (a ticket that once was $40 is now $80 so it can sell at “half price” on Groupon or Tix4Tonight).

But catching up with McCambridge and Fillaseat founder Ryan Lew, the business stills seems to be one of mostly intangible benefits.

Lew says he dabbled in stand-up comedy, so he knows the more-the-merrier thing firsthand.

“I didn’t care how the people got there,” he says. “I just wanted there to be people there. The difference between performing in front of 10 people and 100 people was day and night.

The line between “intangible” and “tangible” becomes quite thin if you figure some shows may sell only a couple of dozen paid tickets. If you walked in and saw a crowd that small, you’d think you made a terrible mistake even before the curtain went up. But if there are 50 to 60, it’s a comfortable audience.

Still you might ask (as I have many times), why a performer who sells only 20 tickets would even bother?

Well, there’s the intangible resume credit of “a Las Vegas show” to get work on cruise ships and elsewhere. And there’s the tangible of, as Lew says, “once the door closes, that empty seat is worth nothing.”

If you show up, even for free, you might buy a T-shirt or DVD. And if it’s the rare venue that operates its own bar, such as the V Theater at Planet Hollywood Resort, drink sales help, too.

But most of the time, the performer sees nothing from your bar bill, or that service charge you paid on the ticket. And DVD sales are shrinking, thanks to YouTube copyright scofflaws. So the tangibles are even less tangible than they used to be.

So, if I just turned you on to a way to see shows for free, let me guilt you with some more information and a couple of more anecdotes. The kids would call it “house seat shaming.”

First, if you think any percentage of your annual fee for House Seats or Fillaseat somehow goes to the performer, you’re wrong. It all goes back to running the operation.

Also, don’t be the person who bitches because they seat you in back. Up front is for paying customers.

One producer tells me that if there are unintended consequences of the house seat thing, it’s this: Locals used to be valued for their role in spreading the word, “talking up” a show. Now, the producer says, they tell their friends, “I saw this great show, but don’t buy tickets. Here’s what you do … ”

And here’s the worst story I heard. The producer said his act would sometimes say, “Some friends of mine are coming. Make sure they get a good seat. Make sure you take good care of them.”

But when the producer saw the tickets, you guessed it. It was from a seat filler.

So sign up, see some shows, have fun. But try to buy something. You can always regift the T-shirt.

And to paraphrase the closing joke you hear a lot around town: “If you liked the show, tell your out-of-state friends. If you didn’t, tell ’em you saw Criss Angel instead.”