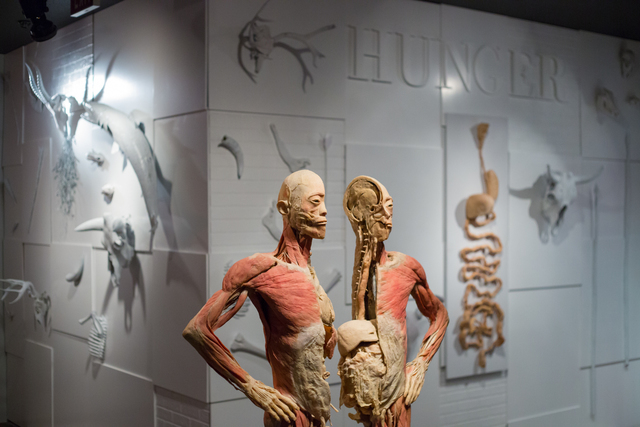 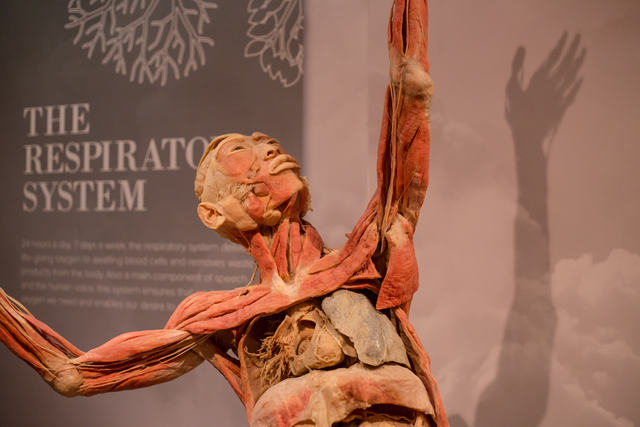 Are you going to choose your skinless dead bodies by which side of the Strip you’re on (east or west)?

Or do you stake your anatomical turf by your loyalty to giant casino corporations with connected properties? MGM Resorts Inc. or Caesars Entertainment?

Either way, a Strip with at least two of everything now has two human anatomy exhibitions: “Real Bodies at Bally’s” recently opened to compete with the long-established “Bodies … The Exhibition” at Luxor.

“I don’t think of it as rival companies going head to head,” says Tom Zaller, the CEO of Imagine Exhibitions, which created Bally’s attraction.

“The way I look at it is Las Vegas is a huge market,” with about 20 million unique visitors a year, he adds. “I feel like there’s enough room for many different players.”

Zaller certainly knows the territory when it comes to what tourists want to visit on a hot afternoon. He helped bring the first “Bodies” to the Tropicana in 2006. It moved to Luxor two years later, with what was announced at the time as a 10-year lease.

But Zaller left Premiere Exhibitions to start Imagine. Litigation stemming from the two companies’ rival “Titanic” exhibits suggests there are legal as well as market incentives to make “Real Bodies” as different as possible.

But it’s been 10 years since the Strip first hosted these real human remains preserved through a technique called plastination, one which made a splash both in pop culture — the James Bond movie “Casino Royale” — and among ethicists debating the display of unclaimed, unidentified cadavers.

Zaller says the new attraction, taking over four vacant retail spaces on the east end of Bally’s, will have “twice as many full body specimens” as Luxor, but will also tell “a deeper story.”

The first exhibit began with “a more clinical and purely factual approach.” The new one is more “a cultural, historical and emotional narrative that takes it to a much deeper level.”

Rooms of the new attraction will study fetal development, breathing — with the help of 16 fans — and what Zaller calls “the odd, unique medical approaches” of ancient anatomists (leaches, bloodletting). The grand finale is a step inside “Death’s Door” to see what lies beyond.

If you say you’ve seen it all twice on the Strip, we can probably agree to not talk about your other trip to death’s door. …

Bad news was softened with last week’s announcement that “ShowStoppers” is still closing at Wynn Las Vegas, but on New Year’s Eve instead of late September. It should at least make the holiday season a little brighter for the cast of 60-plus performers and musicians.

The delay suggests Steve Wynn didn’t have an immediate replacement lined up for the labor of love he conceived, wrote and even narrated (on tape). And “countdown” campaigns can be effective in giving locals the hurry-up if they have put off seeing the show.

But it seems ironic now that in one review I called “ShowStoppers” “a community give-back” which “doesn’t seem to be as commercial as it should be,” and in the first review, I called it “a gift to the underserved, retirement-age folks who still visit Las Vegas but are now ignored in its collective marketing.”

Maybe a little less giving, and a little more Scrooge-like greed can find a more commercial replacement to keep these show folk working. …

Las Vegas has hosted two Tony Bennett appearances related to his 90th birthday: The Keep Memory Alive tribute in May and his return to Caesars Palace for the hotel’s 50th last weekend.

But what about Buddy Greco?

It was up to the Italian-American Club to host a Saturday tribute to the jazzy crooner and pianist, who turns 90 Sunday.

Greco, best-known for a finger-poppin’ version of “The Lady Is a Tramp” had a good second-act run as part of the early ’90s resurgence of the Desert Inn, where he shared the lounge with Sam Butera and Keely Smith. He ended up marrying singer Lezlie Anders and the two moved to Palm Springs, California, but performed their Peggy Lee tribute “Fever” at UNLV in 2002.