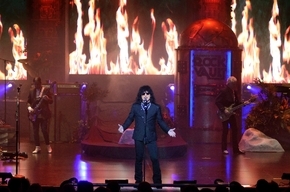 That’s one thing we all should be able to agree on in “Raiding the Rock Vault,” a classic rock revue that gives us a great drinking topic.

If you were preserving the best of rock history for post-apocalyptic explorers to uncover in the year 3012, what would you pull out for a two-hour set?

I might argue that you shouldn’t forget Bruce Springsteen to remember Bon Jovi, or that Boston and Bryan Adams are better left entombed. And you might ask how they remember Paul McCartney but forget the Beatles? (The answer to that one might be to avoid any headaches from a licensed Beatles show called “Love.”)

The good news is that it’s all beer talk. Every song that does get pulled from this “Vault” sounds great, and each one will put a big smile on the face of its target audience — those folks who do not really care whether they also made vaults to protect R&B, hip-hop, standards, anything written after 1990, etc.

“Rock Vault” is mainly an excuse for a bunch of almost-famous rock vets — heavy on guys who were in big groups, but not as original members — to play the hell out of the classics.

But there are other such ensembles asking for less money out in the suburbs: Sin City Sinners, Elvis Monroe, etc. So “Rock Vault” had to go big and make an admirable attempt to fill that big ol’ LVH stage with something more than a bar band knocking back covers.

And fill it they did. To the point of not knowing where to quit.

It’s almost like writers David Kershenbaum and John Payne — the band’s bassist and one of its many singers — came up with several promising concepts for a connecting theme, couldn’t settle on one, and figured what the hell, why not just use all of them?

So you have the post-apocalyptic beginning, with people in hazmat suits uncorking the tomb of all rock knowledge in a dry-ice jungle. They never really get back to that one. But there is an old-school, velvet-voiced DJ dude (Richard Malmos) who in time gets faded out for a hot-chick MTV-style veejay. Not a bad idea either.

But wait, there’s more. How about a “Big Chill” element, with actors on a side stage aging from ’60s hippies to ’80s materialists? Sure, throw them in, too.

All of it is fairly agreeable and the acting is no worse than in “Rock of Ages.” But it adds up to the rare casino show that runs a full two hours, yet only finds room to give its guest star two songs.

That’s too bad, because through Wednesday it’s Joe Lynn Turner of Rainbow fame. And he absolutely kills “Smoke on the Water,” one of several times you hear an old chestnut as though it’s something new and exciting.

Turner comes back later for his big Rainbow hit “Stone Cold.” But there’s no room for “Street of Dreams” or for him to take over any of the songs already covered by the show’s regular arsenal of singers.

Those guys do have it under control. You count on great players, and it’s a fun study in contrasts to watch stoic Howard Leese (Heart) trading guitar licks with wildman Tracii Guns (L.A. Guns) on “Hotel California.” And just because it’s that kind of show, the song layers in two acoustic guitars for added texture.

But the bigger surprise is how many good singers are onboard, and how they don’t much overlap. At 60, Robin McAuley of MSG (McAuley Schenker Group) is still in remarkable grasp of his high-end wail, whether on Queen’s “We Are the Champions” or Supertramp’s “The Logical Song.”

Paul Shortino can handle both the lower end to summon Jim Morrison on “Light My Fire” or Robert Palmer on “Addicted to Love.” And Andrew Freeman is a versatile utility man on everything from Journey’s “Separate Ways” to Van Halen’s “Jump,” the final answer to several “This has gotta be the last song” peaks.

By then, the actor (Ryan Mueller) who has gone from Captain America in “Easy Rider” to Gordon Gekko in “Wall Street” has declared, “Our intention was good, but we did not change the world. But they listened to our music.”

And wore our Spandex. It speaks to the overall level of fun that we agree to give age-appropriate dress the night off and let guys over 50 work the leopard prints, skull-and-crossbone belt buckles, shredded jeans and New Romantic coats.

You can’t stop the rock, but some things could probably stay in the vault.