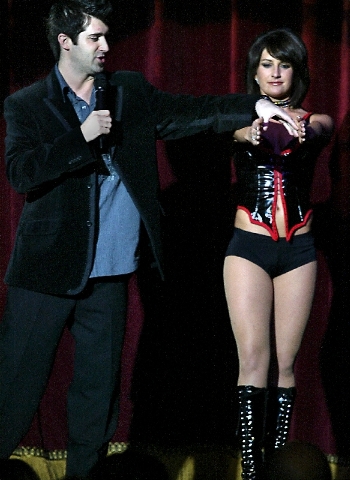 Hypnotist Marc Savard, shown at a 2011 hypnosis lecture in Las Vegas, hopes to help his wife deliver a new daughter via hypnosis.

If you don’t believe hypnosis is real, don’t talk to Marc Savard’s wife, Joanna, for a while.

Joanna is set to deliver the couple’s fourth daughter any time now. The predicted delivery date is Tuesday, but “I’m hoping for Friday because it’s my night off,” jokes Savard, the star of “Comedy Hypnosis” at the V Theater.

Whenever she arrives, the baby is set to be delivered through natural childbirth aided by Savard’s hypnosis.

Yet Savard says the royal hubbub did not generate any noticeable new interest in hypno-birthing from those attending his “Comedy Hypnosis” show.

It’s still business as usual at his house, which most of us find unusual. It’s a long way from Savard’s nightly work in making guys think they have jock itch, or believing their name to be “E-i-e-i-o.”

Savard says when they went to the hospital to have their first daughter, Isabel, nine years ago, they announced their attention to use hypnosis as their birthing plan.

“Immediately they responded with, ‘Oh. And when that doesn’t work, what’s your backup plan?’

And work it did, he says. Even when Joanna experienced “fourth-degree tearing” during the delivery and required 40 minutes of stitch work from a worried doctor, “with no anesthesia whatsoever.”

For the past six weeks, Joanna has been programming herself by playing a nightly recording of her husband’s confidence suggestions.

“How much do people train to run a marathon?” Savard asks. A pregnant woman is “running through way more changes than any marathon could ever throw at her. And there is no training for childbirth. When you look at it from that perspective, you realize, why don’t people get ready mentally and physically?”

When the big moment comes, Joanna will begin putting herself into what Savard calls “glove anaesthesia” to numb different areas of her body. He compares it to battlefield tales of wounded heroes doing amazing things in a state traditionally labeled as “shock.” He calls it “the body’s mechanism to cope with extreme stimulus.”

“The body is designed to shut off that pain stimulus in order to get you out of that situation,” he says. “What we’re doing is channeling that mechanism to come in when we want it to happen.” …

There is no longer any question of whether magician Tommy Wind will return to the Boulevard Theater. That’s because he’s the new landlord.

Wind says he has signed a lease for his family to operate the freestanding theater tucked between a Walgreens and Fatburger on the south end of the Strip (locals may remember it as the Empire Ballroom or Utopia).

Wind’s magic show opened in November and held on as a tenant while the theater otherwise proved to be a nonstarter. He put it on hiatus after the Fourth of July weekend when it became apparent the previous operator, Richard Weisman, would lose the venue.

“My first and foremost responsibility has now become the theater,” Wind says of the venture he will run with his father, Tommy Ricardo, as chief financial officer.

“Now the (magic) is going to become my relaxing point of the day,” he adds. “This theater has to be as successful as it can possibly be, and that in turn will keep my show running.”

If that’s not enough pressure, Wind says his family still plans to develop a smaller venue in the Hawaiian Marketplace shopping center, conceived as his Plan B if the Boulevard bid fell through.

That one could be open by November, and seat 140 to 200 people for shows Wind will lease to other performers. …

Spinks and some of the guests will meet fans and sign autographs in the casino sports book at 2 p.m. Saturday…

The ’80s are finally over. At least at the V Theater, where “The 80s Show” comes to an end Aug. 28. Given that it’s a “jukebox musical” drafting pop hits from the era, it’s also the rare original work with a sketch of story to originate on the Strip.

Creator Sirc Michaels hopes to book the show out for tour. Good idea, since the musical has gone about as far as it can in the confines of its second-stage space at the V Theater. …

Comedy promoter Joe Sanfelippo is moving things around in the two show spaces at The Plaza.

In the main showroom, Wednesday was to bring the relaunch of “Superstars of Magic,” starring Steven and Cassandra Best. The couple had been performing across the casino floor in the smaller Bonkerz club space, using the title “Viva Vegas Variety Show,” because they lacked the room to perform larger illusions.

On Sept. 1, comedian Warren Durso will perform a kickoff show in the main room, before moving into Bonkerz to perform every Monday through Wednesday.

Durso will be billed as “The Ugliest Comic in America,” borrowing the name of an unusual Esquire profile that ran last year. It described Durso as “one of those comedians you’ve never heard of who can make you wet your pants — a veteran utility guy, in other words, a comic’s comic, the kind of dude who knows all the famous dudes but never became one.”